We have spent the last 9 days in Russellville, AR. We had a great time visiting our son Michael, his wife Audrey, and their two boys Connor 4 and Cameron 10 months. I am so proud of my son and his wonderful wife. They have a great family. 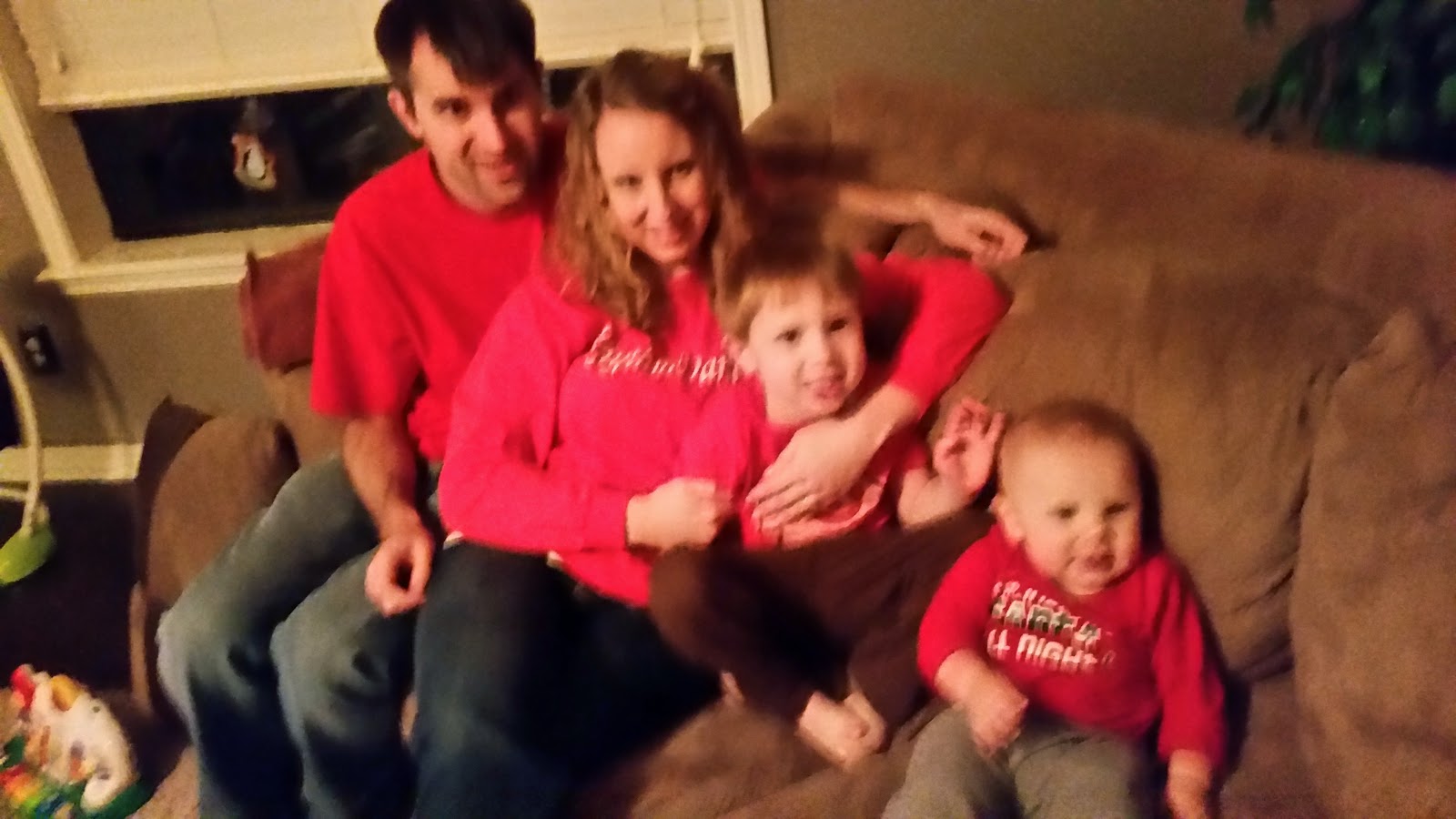 Michael and I worked hard on his motorcycle and finally got it working correctly. I just hope he has time to ride it and have fun.

We had a great Christmas. We enjoyed our Christmas last year on the beach in Florida, but it is better spending time with family. We spent some great time with the kids. Connor loves to wrestle. He is all boy. 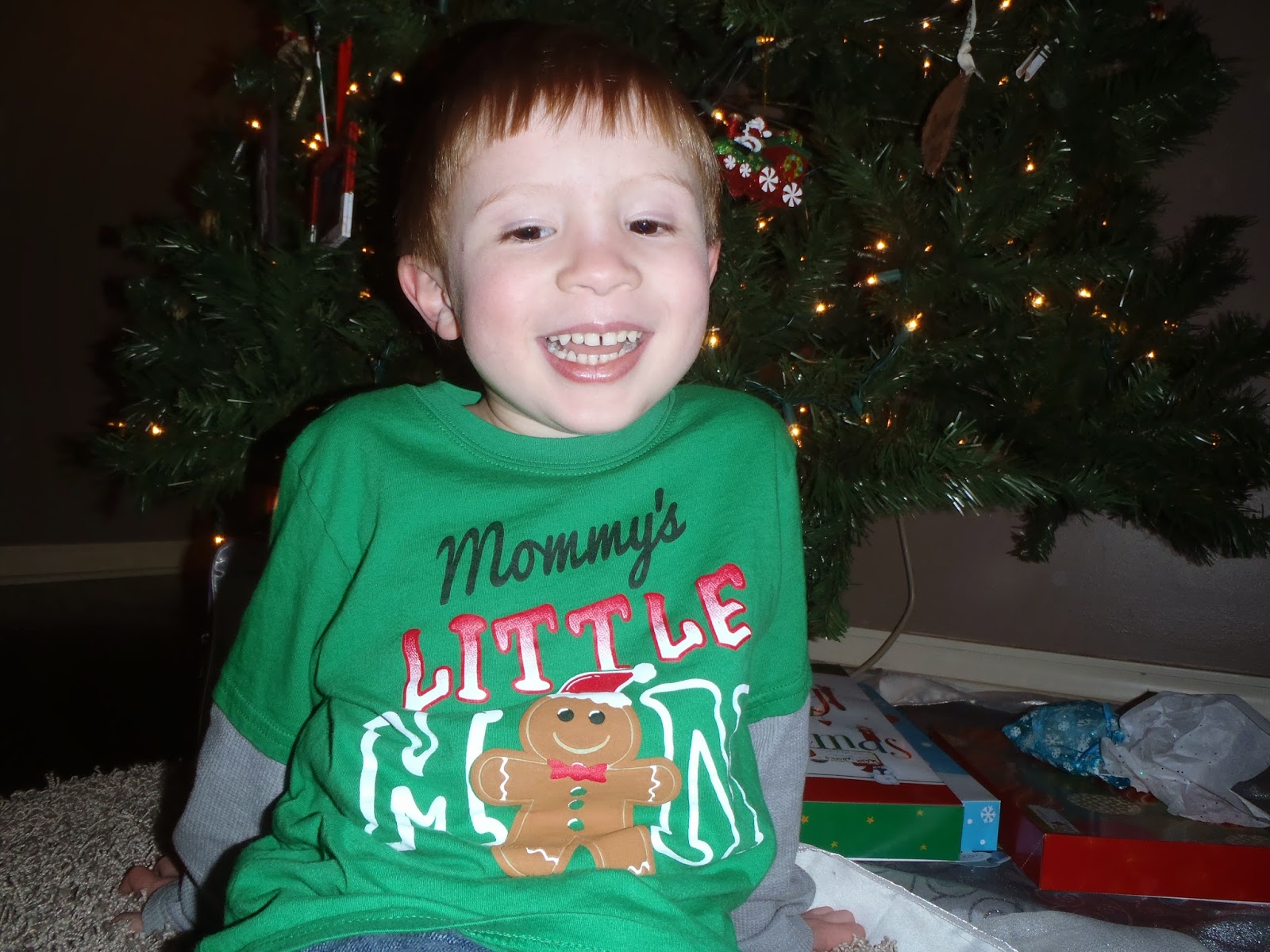 We did get to a bowling alley. Connor loves to go bowling. 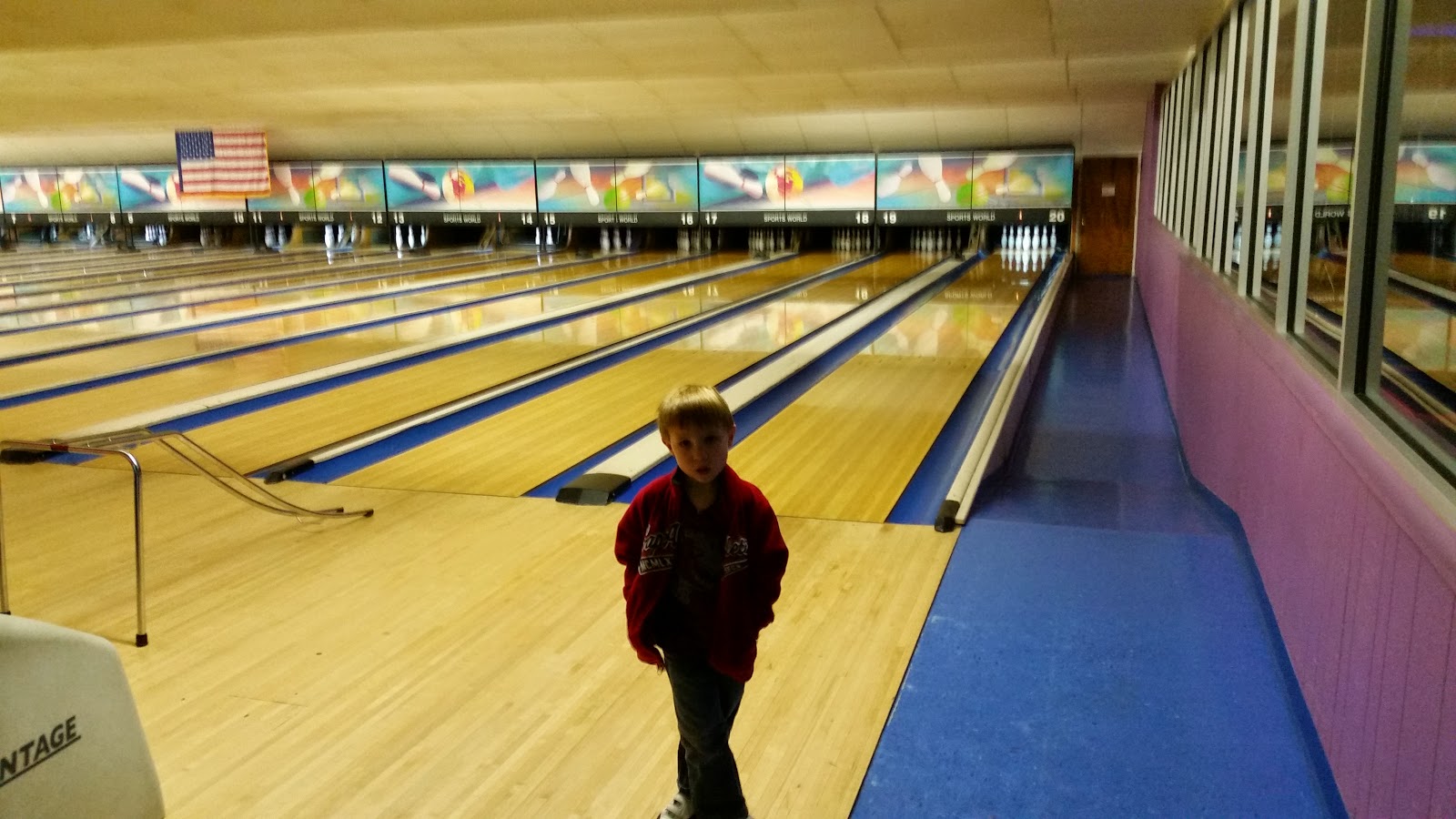 We also loved spending time with Cameron. We both felt that we were able to gain a connection to him and hope that he will remember us the next time we get to see him. Here are a couple of good shots: 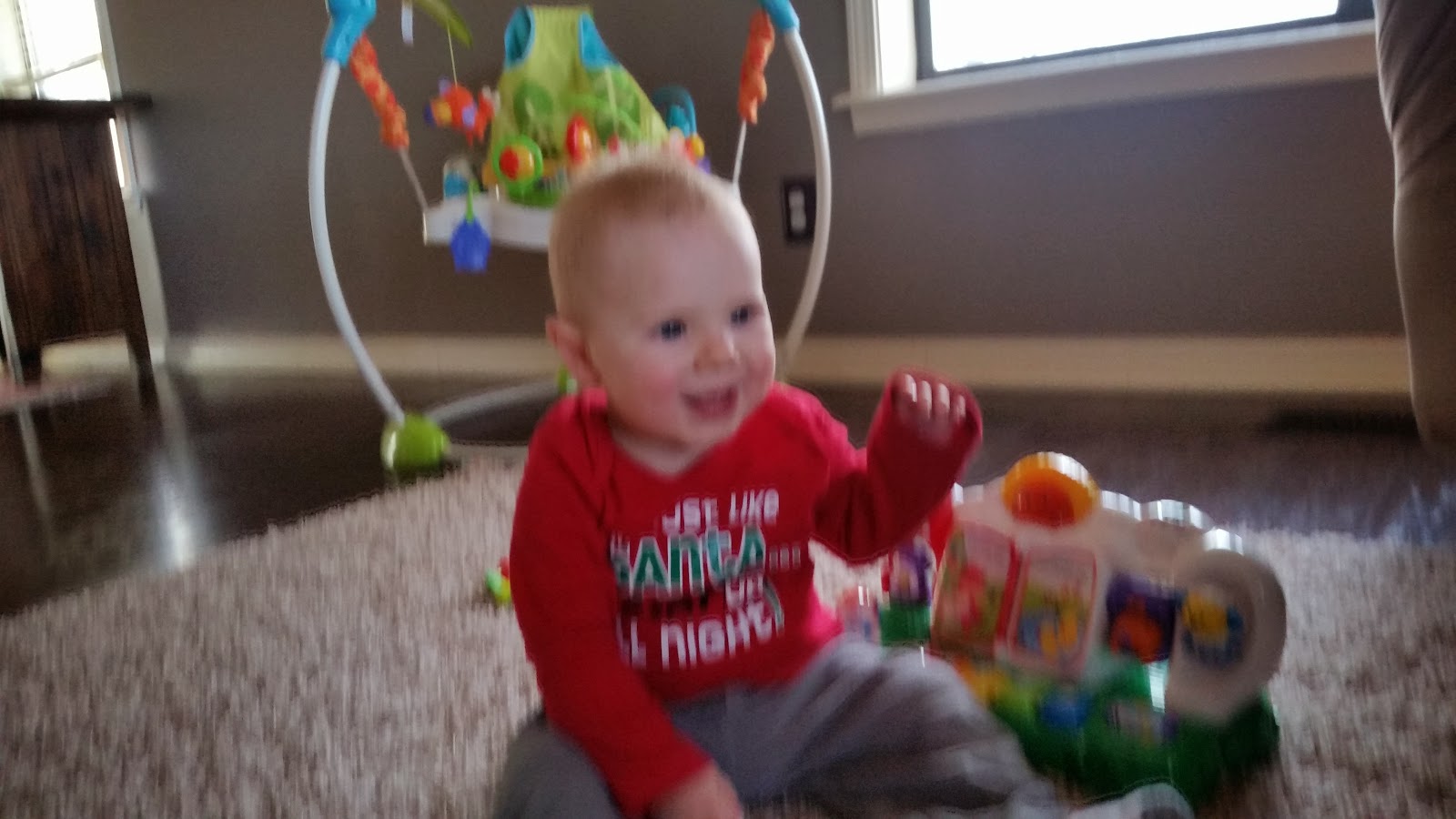 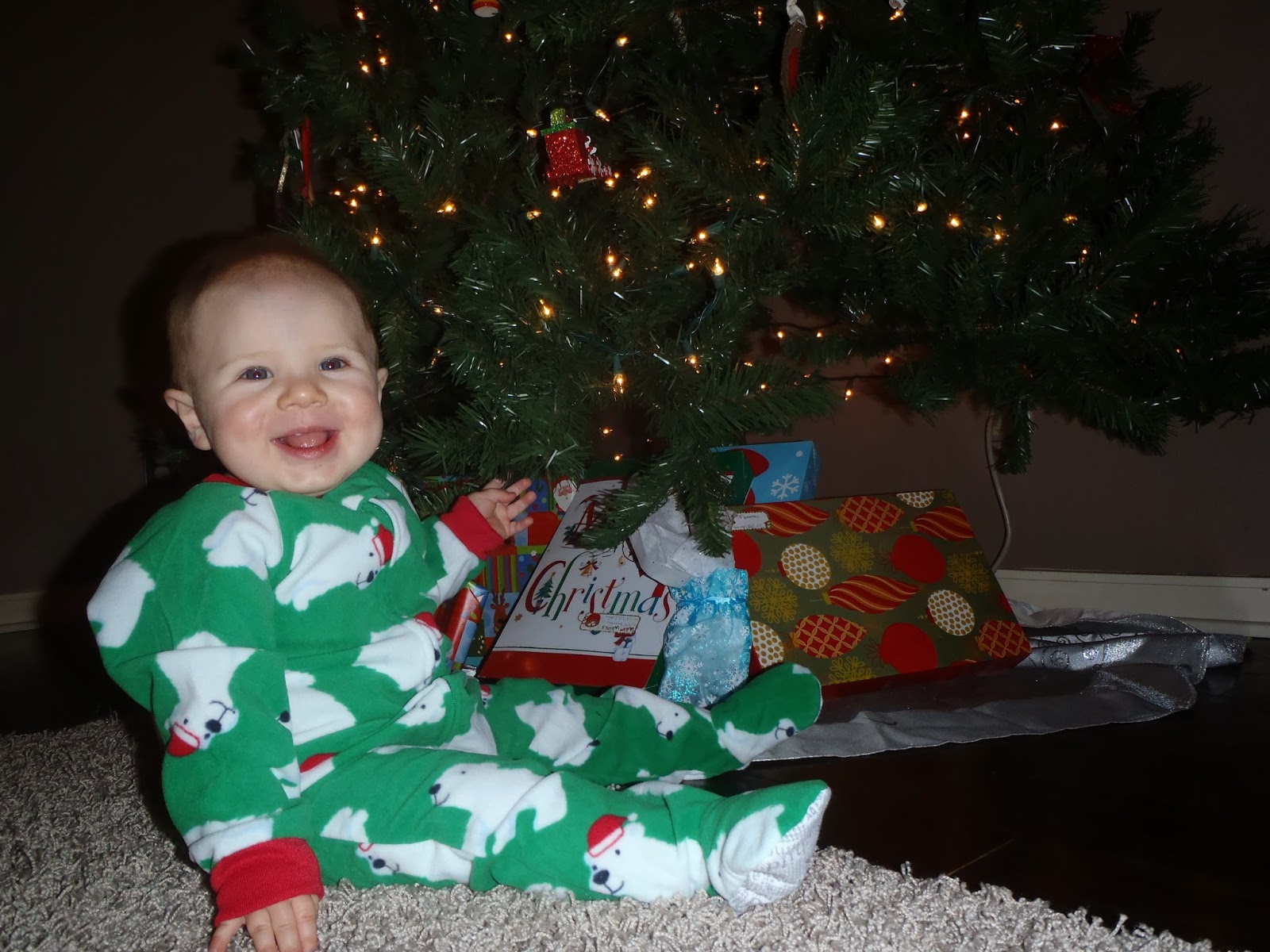 We did not spend a bunch of time in the RV park, but we really like it here. We will stay here whenever we come to visit Michael and Audrey. There are deer walking through on a regular basis. 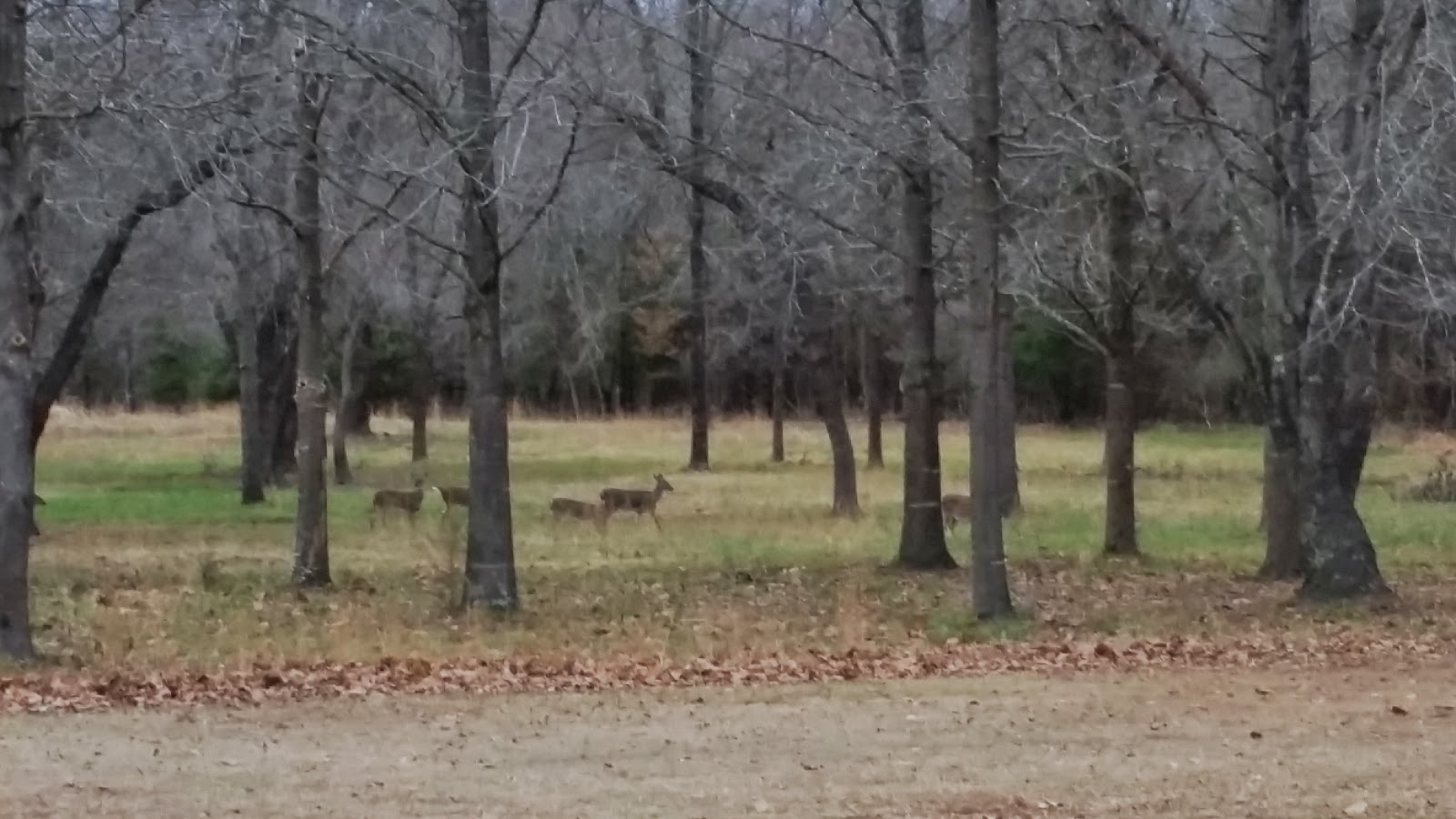 We also see barges cruising by. They are really cool to watch. If you time it right, you can watch them come through the locks. 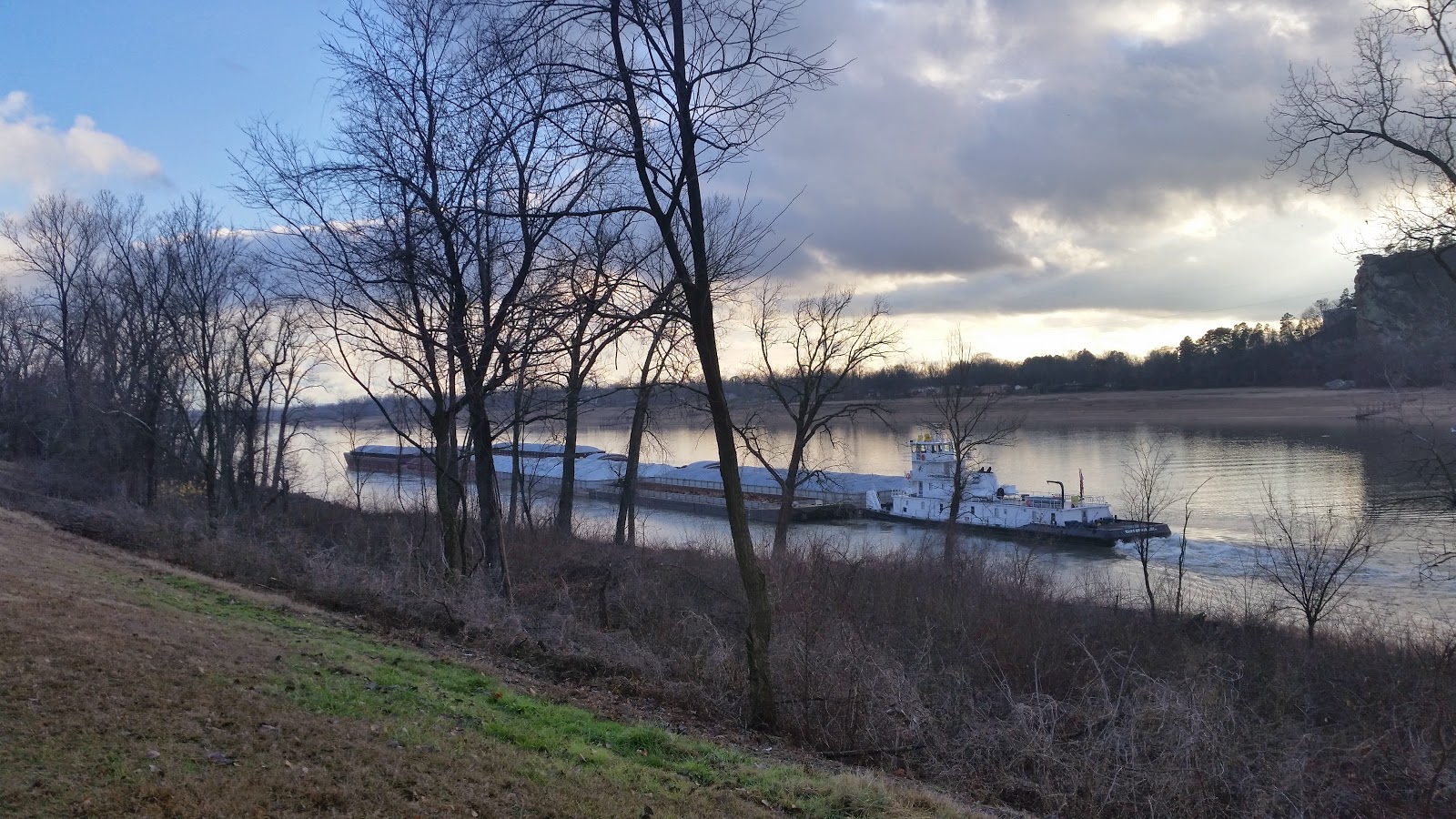 Here is a shot of the locks: 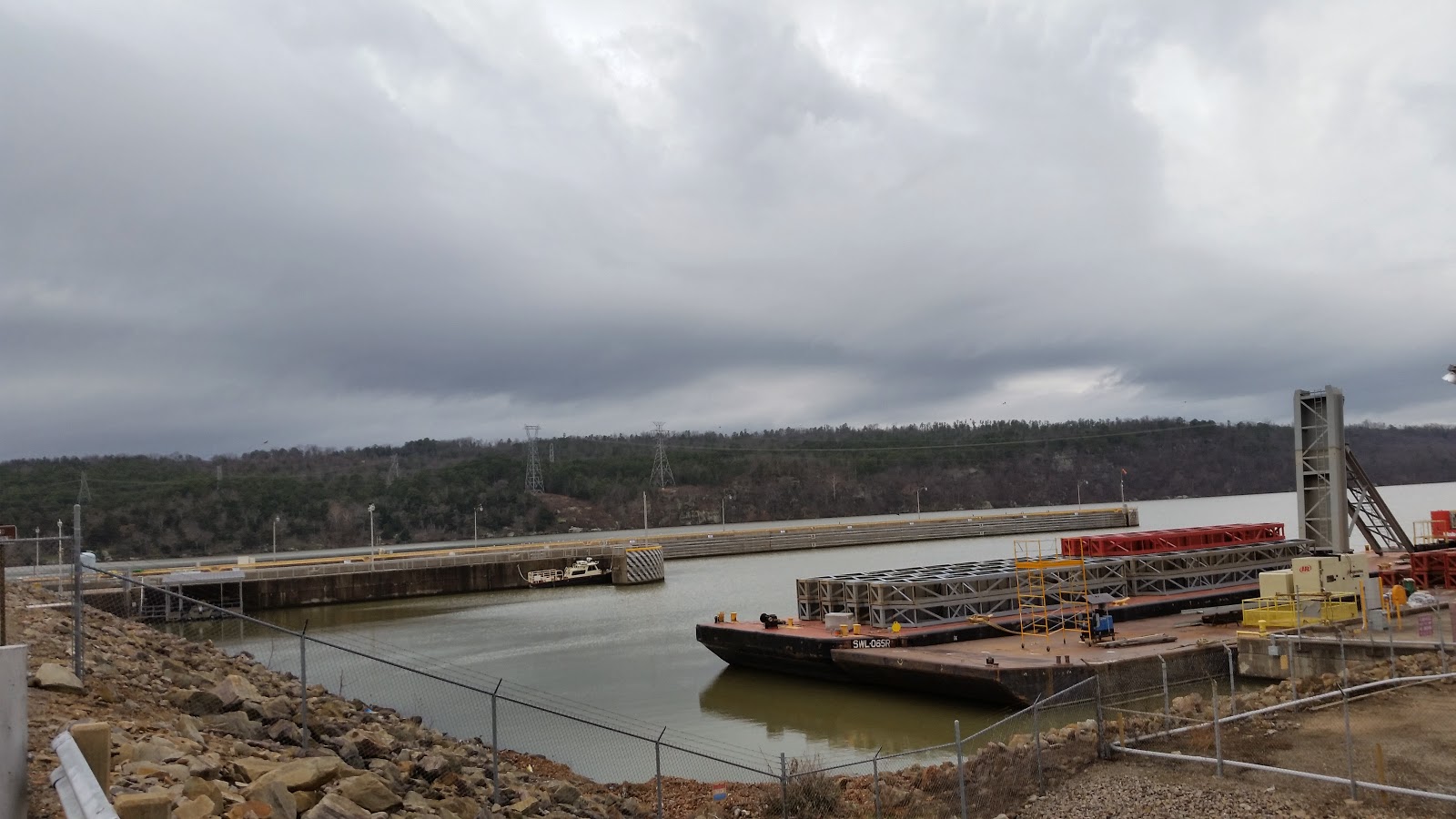 The best part was the bird watching. We saw flocks of White Pelicans, but I really enjoyed seeing Bald Eagles. I could not get a a good picture of one, but I saw one each day when I walked. They are so majestic to watch fly. I saw both adults and some juveniles. Here is the best I got. You will have to take my word for it. 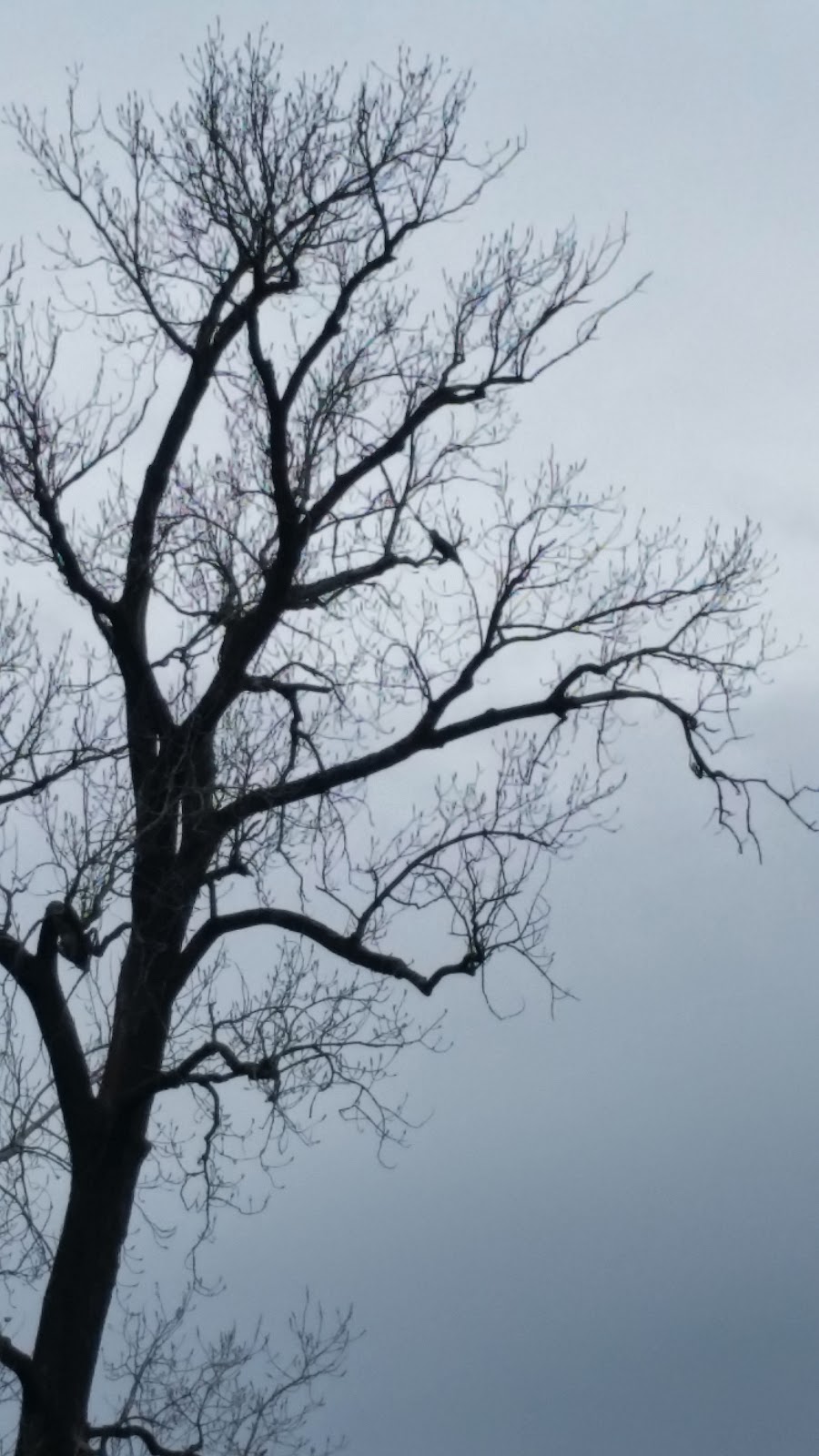 The time has come to move further south. We are heading out tomorrow and will get down to around the Texas border. I hope we can find some warmer weather. Have a great day.

Posted by ktmissouri at 4:40 PM No comments:

We are on the road again. We are in Arkansas, camped along the Arkansas River. We get to see some beautiful birds including White Pelicans and many varieties of duck. We have not seen any barge traffic, but we have not spent much time in t he campground during the day. We spend most of our time at Michael and Audrey's. Check out this video of Cameron. He was born the last time we were visiting. He is getting sooo big. We heard some noise in the train room and I went in and caught him on video.


We left Mansfield in a thick fog. I took this one shot at the gas station in town: 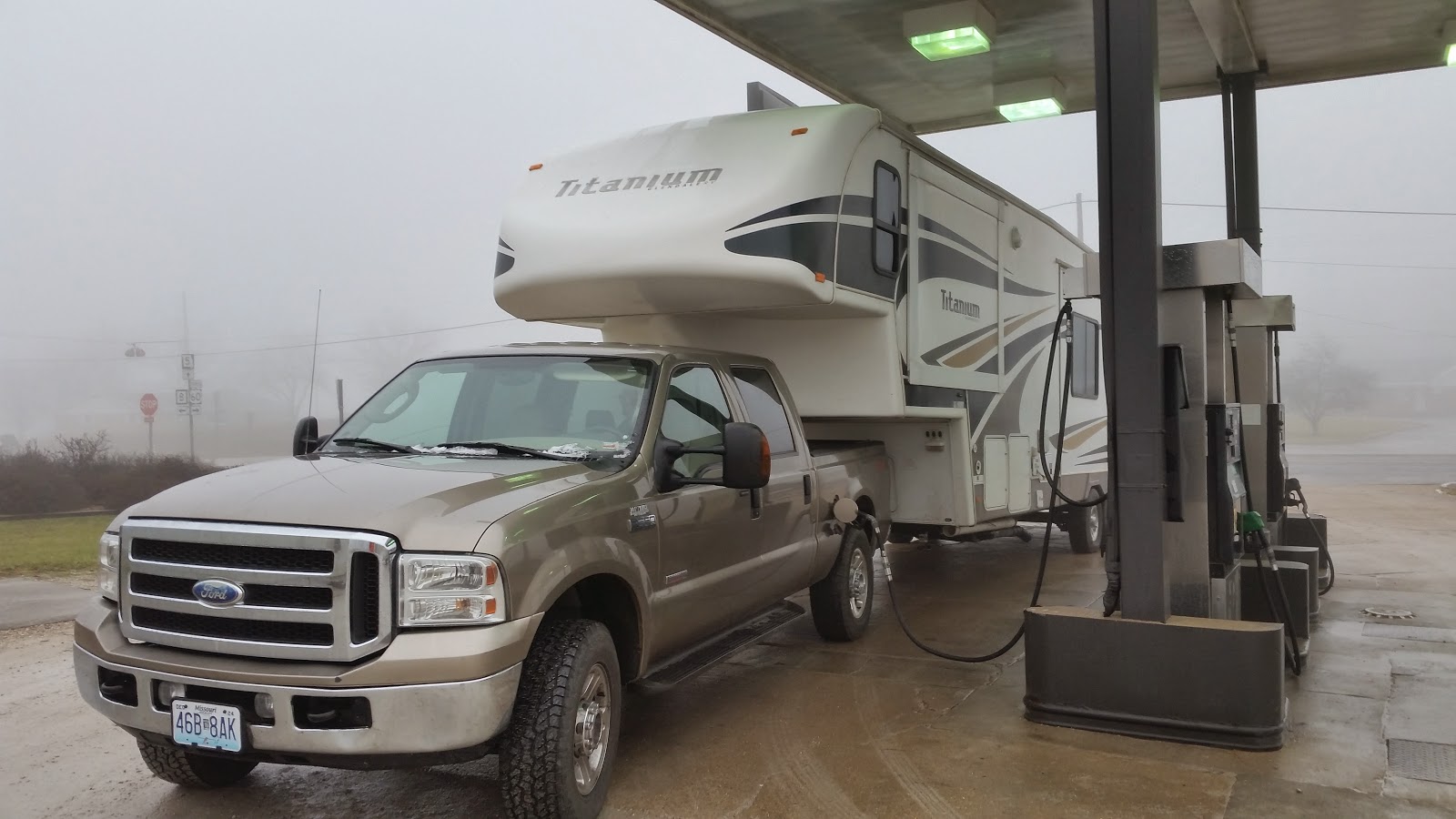 The good news is that the diesel was under $3.00 per gallon. We have seen regular unleaded at under $2.00 per gallon. The prices are back up down here in Arkansas to around $3.20, but that is still much better than this summer in Colorado. I have been working on Michael's motorcycle. I thought I had it fixed, but I had to start over yesterday and split the cases again. I ordered some more parts and tools and hopefully we will have it ready to ride this coming weekend.

I will let you know that I am going to be posting some other stuff in my blog for some of my motorcycle racer friends in the coming days. You can disregard those posts. I am writing some helpful stuff to educate some of the more serious racers on how to develop income from social media for continuing their racing careers.

We are not sure when we will leave Arkansas and head to Oklahoma. It will depend on how the motorcycle repair goes and what the weather is doing. In the meantime we are really enjoying some time with the grandkids.

Posted by ktmissouri at 10:37 AM No comments:

It has been over a month since my last entry in this blog. So much has happened. It is difficult to remember when I don't write every few days, but I need a break from the blog and I don't feel that much of it would be of interest to all of my readers.

The big thing going on was the Ozark 100 Miler. That is an off-road motorcycle race that was held at the ranch where we stay. This year was big for all of the people involved because we went out and attracted some top national riders. We had a writer come to the event from a national motorcycle publication. You can see the story here: http://www.cyclenews.com/619/27317/Racing-Article/Steward-Baylor-Tops-Seventh-Annual-Kenda-Ozark-100.aspx

I spent the weeks leading up to the event riding around on a tractor, mowing: 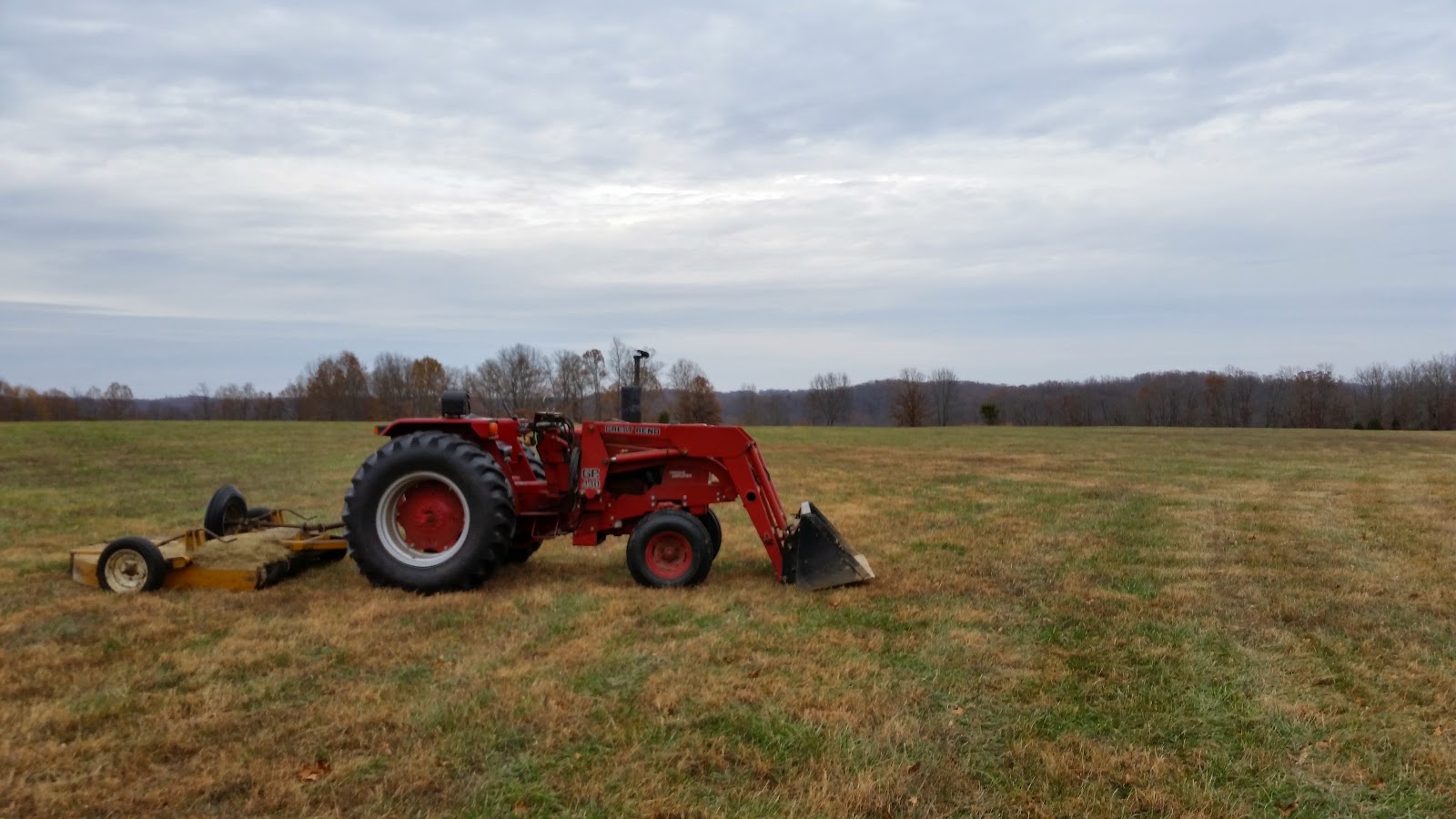 This was the main pit area for the event. We had over 500 people through the gate. 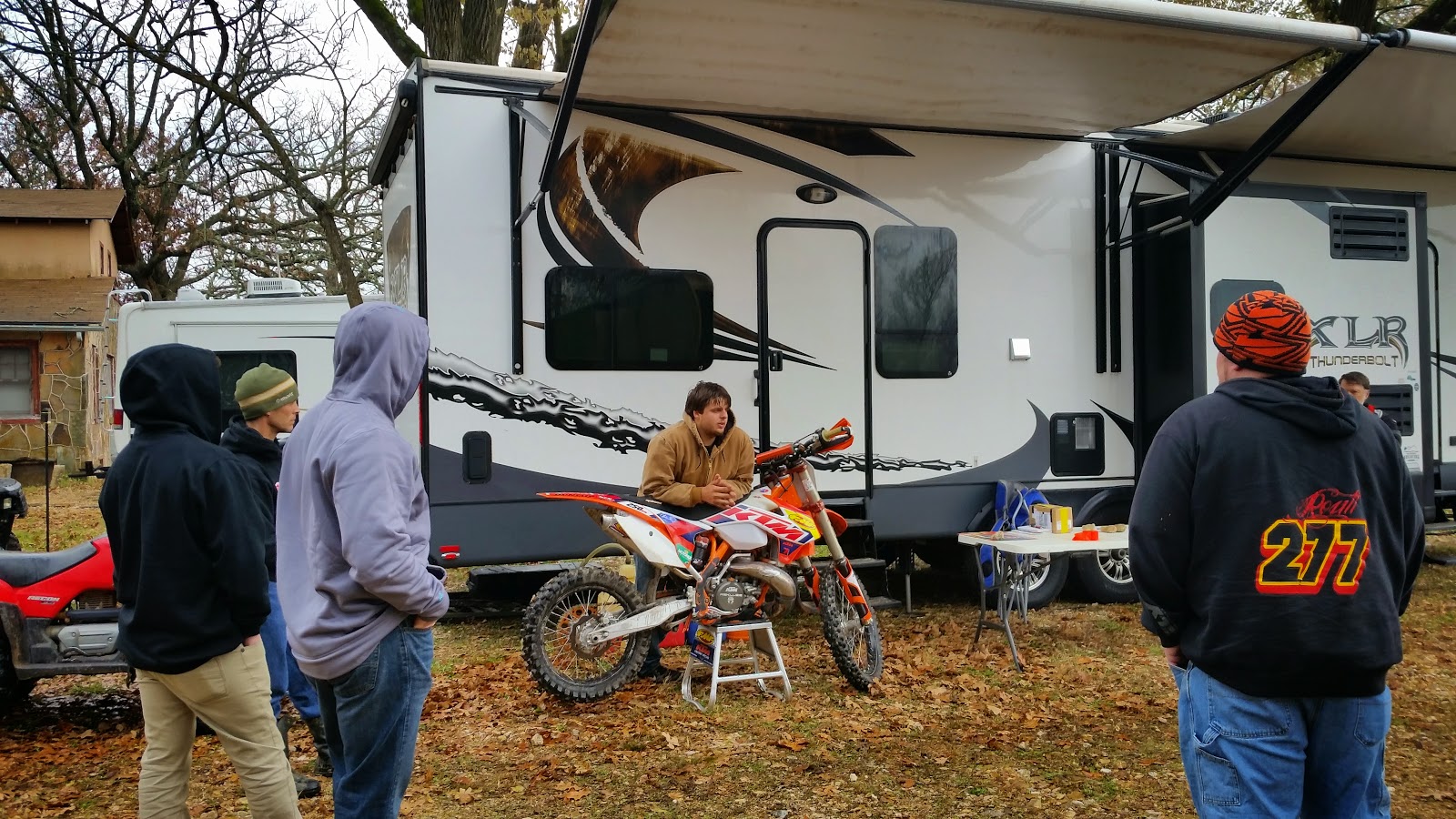 The weekend before the event, 2012 National Enduro Champion, Steward Baylor came in to do a riding school. You can see his trailer and then mine in the background of this photo. It was great hanging out with the champ and hearing the inside scoop on all that I have read about. He is a really nice guy and only 20 years old.

One of the coolest things about this event is that the last 25 miles are run over extremely difficult terrain at night. The guys have lights on their bikes, but some sections are lit up to allow the spectators to see better. Here is one of those areas: 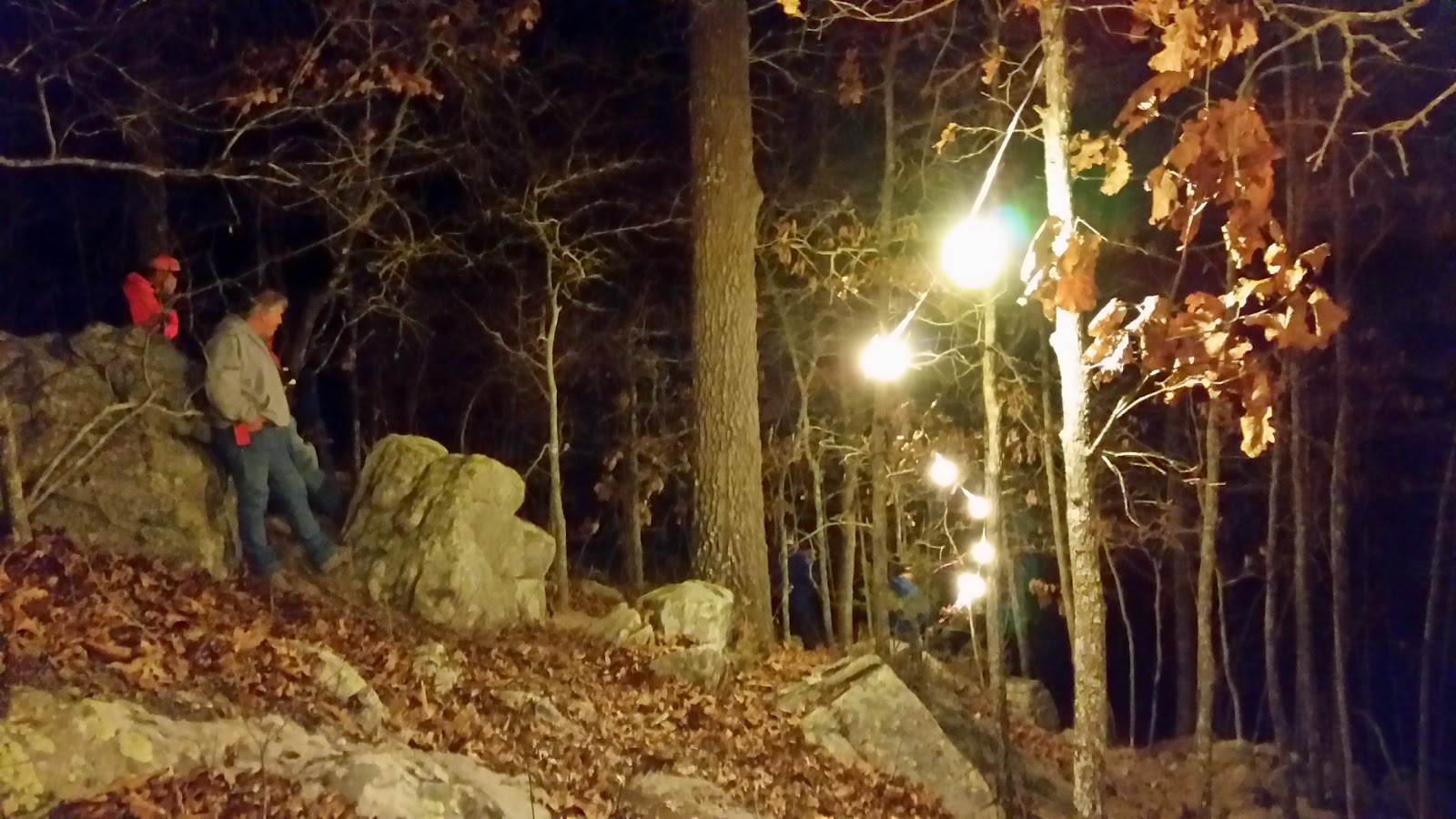 Here is the final podium for the winners. The guy standing in front is the promoter, my friend Spud. This is the guy that my son Scott works for. Scott was also very involved in putting this event on. 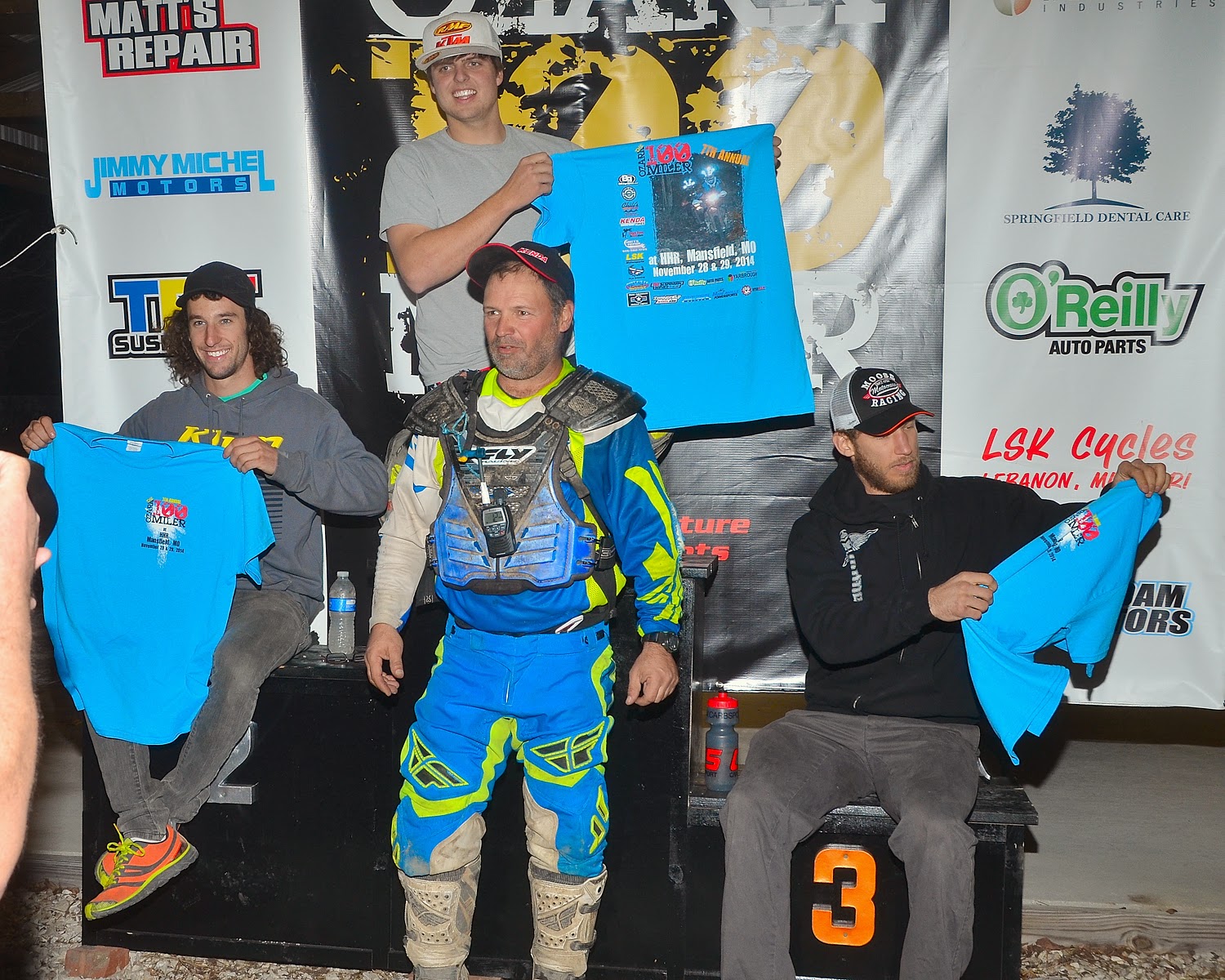 Stu Baylor won, he is from South Carolina, Ian Blythe was second, he is from Colorado. And Nick Farranger was third, he is from Ohio. It was really a dream come true to have this event at our ranch.

Just before the race, we tried to have Thanksgiving at the lodge. It got kind of crazy and I don't think it worked out very well. We will have to rethink that in the future. We did get some good pictures. This is Kim's mom with three great grand kids. (Connor, William and Cameron) 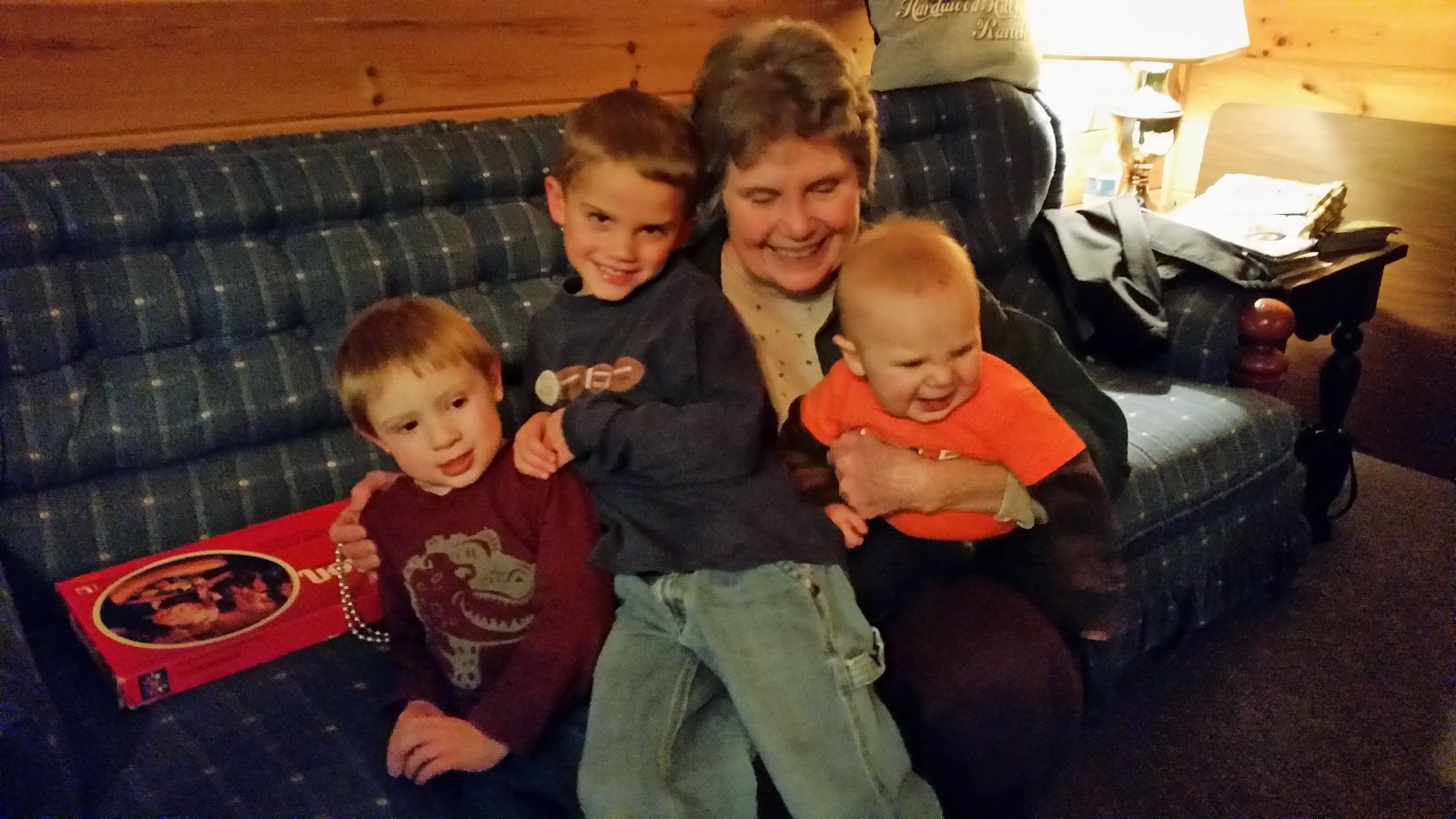 Here are Connor and William. They are going to be great buddies for many years. 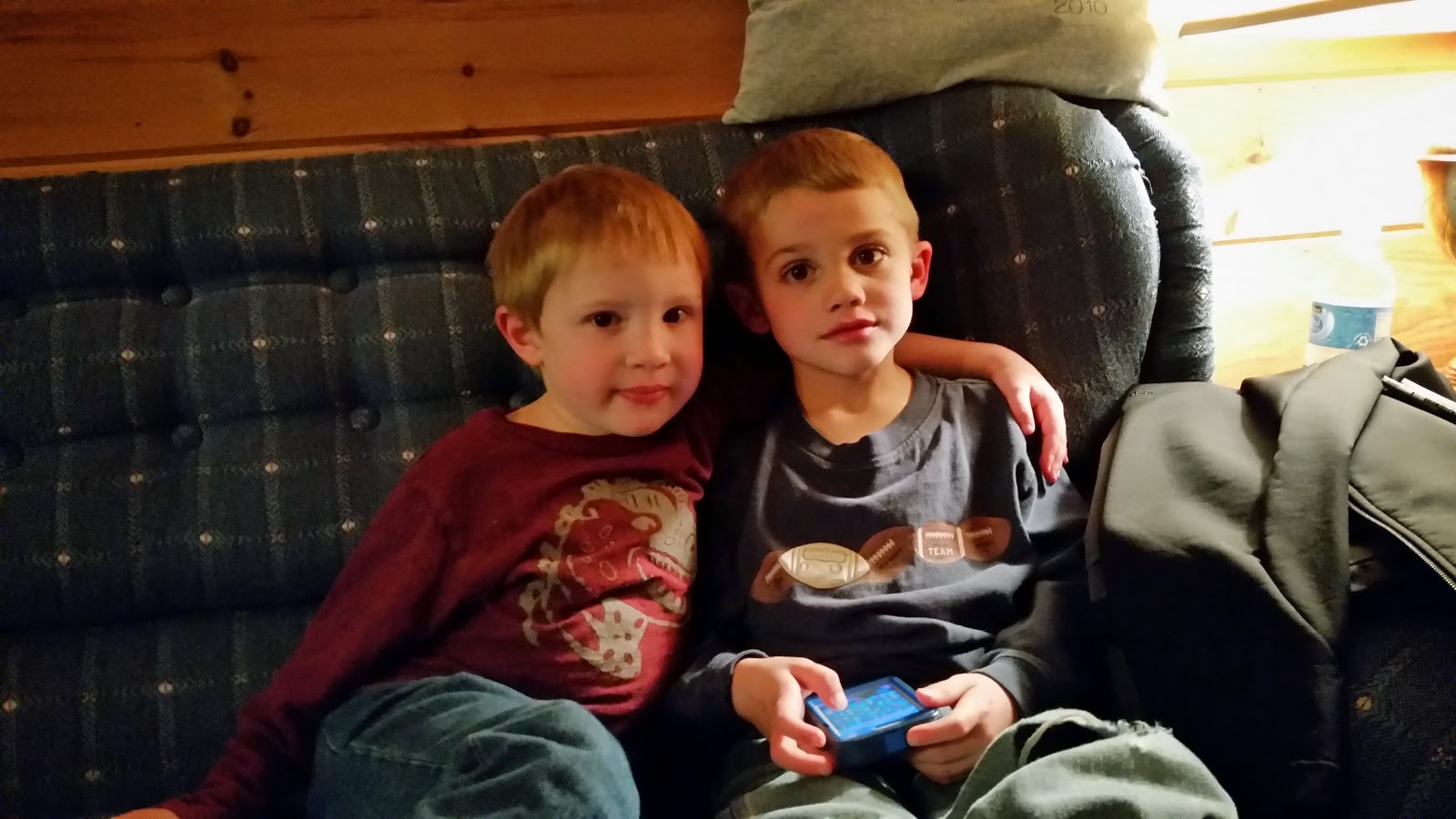 We made a trip to Silver Dollar City this past Saturday. It was very crowded but we still had a good time. Here is a shot of William and Isabella. 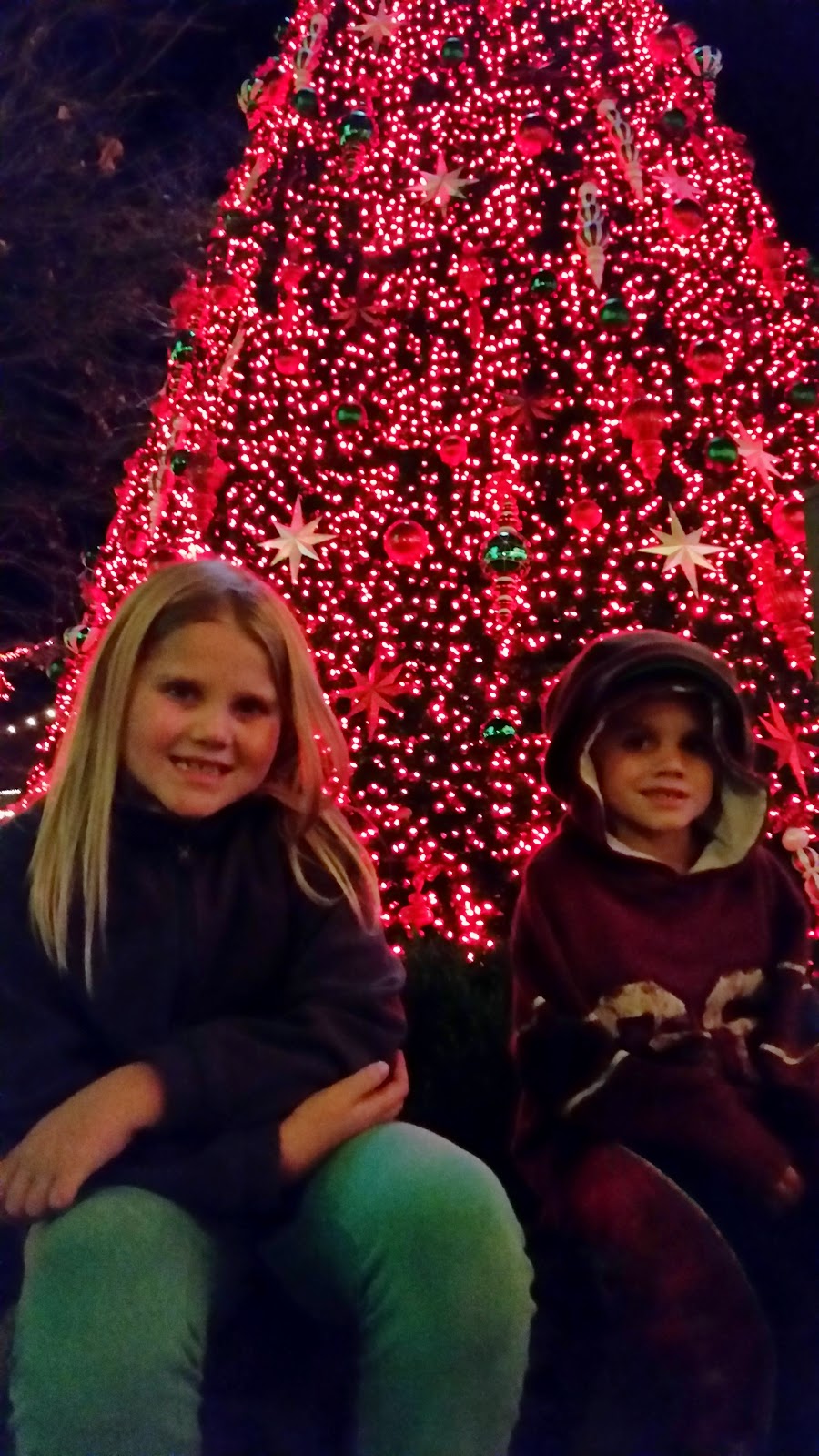 We are just about ready to head south. We have been having good weather and we have had a number of things to do before we left. It looks like we will spend Christmas in Arkansas with my son, Michael and his wife Audrey. I could use some more grandpa time with Connor and Cameron. Cameron is getting so big.

I will start posting more often. We are headed to Texas, but that is about as specific as we are at this point.


Posted by ktmissouri at 1:36 PM No comments: