On Thursday, April 23, we decided to hike the hoodoos. At each park we visit, we like to do something that most tourists do not do because of limited time, vehicle ability or physical ability. Bryce Canyon NP is a smaller park, so a hike was in order to go look at the rock formations up close and personal. Many people hike these trail each day, but you have to be in pretty good hiking shape because of the elevation changes and the steepness of the trails. We were hoping our physical condition was sufficient to not need a ride out in a helicopter.

We are still debating who decided which trails we would do. We ended up choosing a loop of a little over 8 miles. We started right in our campsite and walked to the the rim and down to Sunset point on the rim trail. Then down the Navajo trail to the intersection of the Peek a Boo loop. That loop is about 3 miles and is very strenuous. We then returned to the rim on the Queens Garden trail to Sunrise point and then back to camp on the Rim trail.

It was a beautiful day with temps in the 50’s and 60’s and mostly blue skies. We walked the 2 miles to Sunset point and were eager to start down into the canyon. The first part is the steepest. 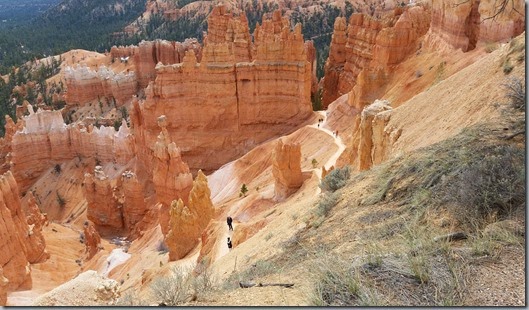 Check out these switchbacks: 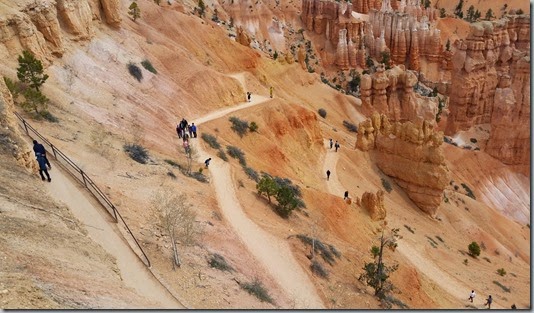 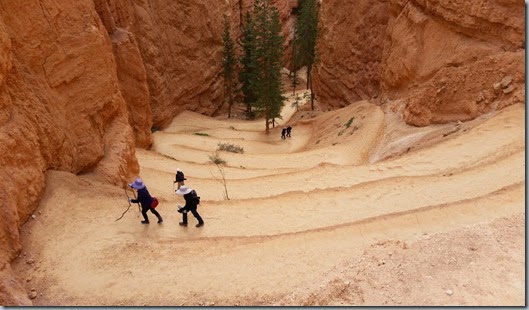 The views from down in the canyon were amazing: 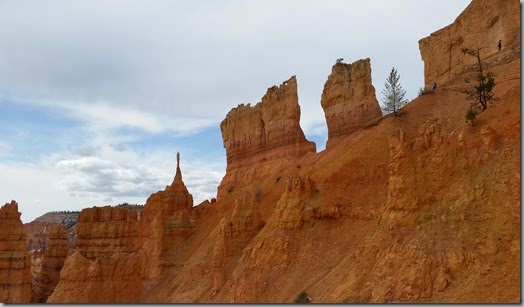 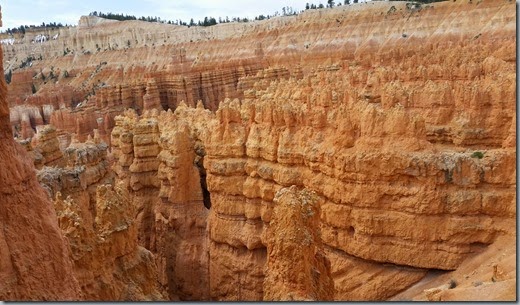 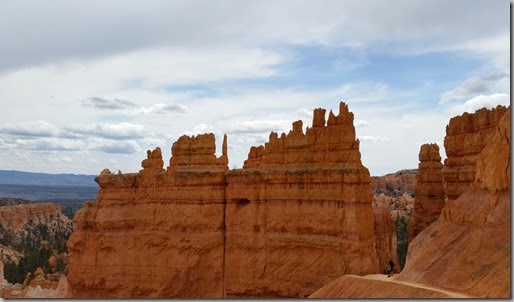 We exchanged picture taking with a guy and he got this shot of us: 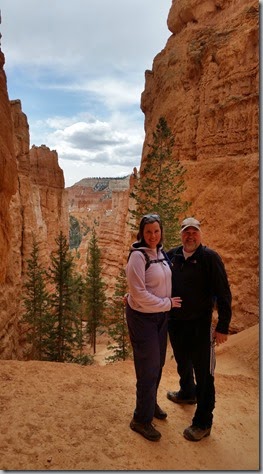 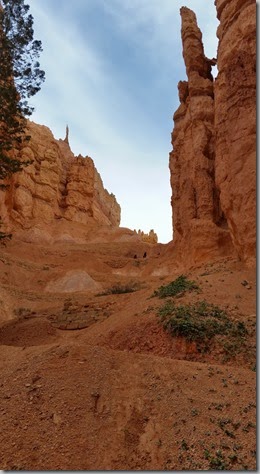 Here is a shot looking back up the last big set of switchbacks. The entire hike in the canyon was big ups and downs, but the biggest was the trip from the rim to the main intersection. In the picture above Kim looks taller than me. This would be considered a flat part of the trail.

At the intersection is a small natural bridge. Of course we had to go see that. 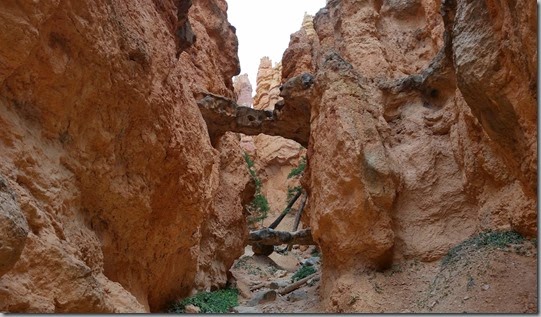 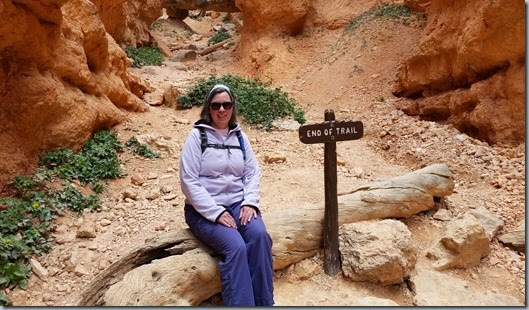 We had now walked 2.6 miles and it was on to the Peek a Boo loop. It started with an uphill that was a killer. 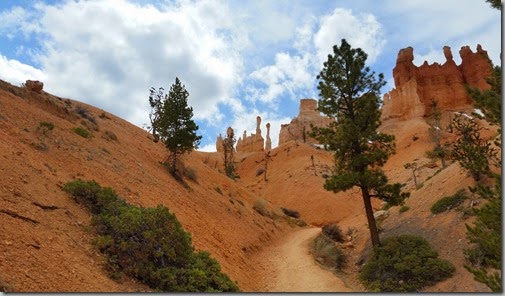 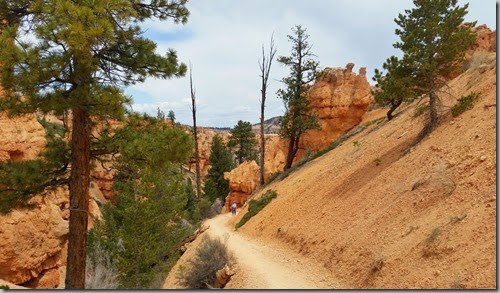 Kim stopped and talked to some other hikers to get the scoop on the trail. We had frequent conversations with other hikers as we all struggled through this trail. Around every corner was a view better than the one before. It was just amazing. I must have said “WOW” 10,000 times that day. 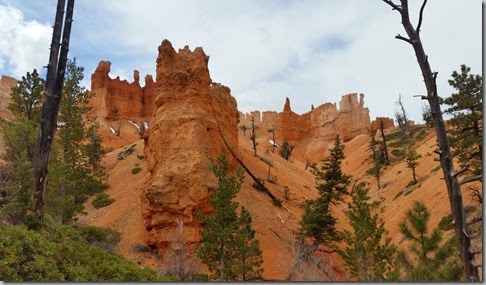 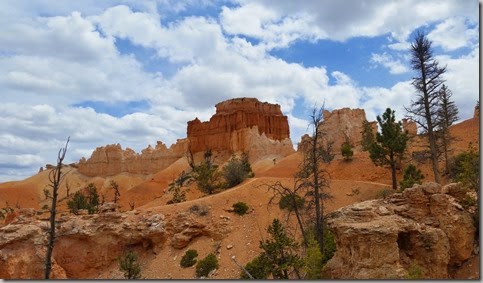 There are signs along the route that have an embossed seal on them. You can do a rubbing or take a picture of them and then go to the visitor center and get a “I Hiked the Hoodoos” pin. We got them. 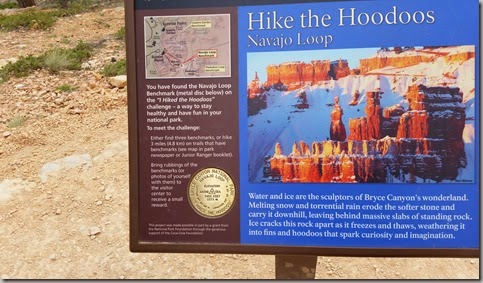 We hiked on for a mile and a half and came to the Bryce Point trail. That is one of the steepest in the park. That is the halfway mark of the Peek a Boo loop. We were getting tired, but the views just kept coming. There were a few spots where they cut a hole in the rock to let the trail through. 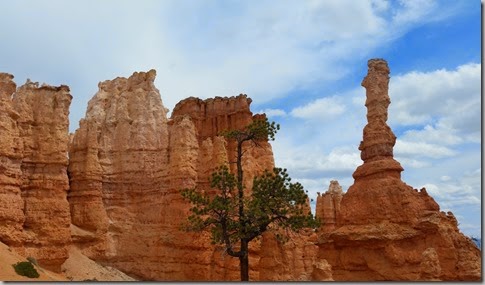 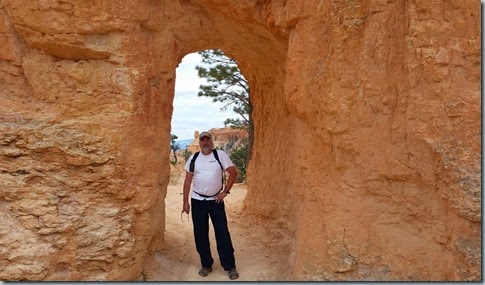 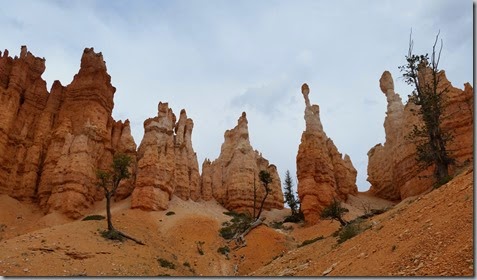 We came to a feature called the wall of windows. It think that was my favorite formation. I got many shots from many different angles. By this point in the day it was turning cloudy and cooler. 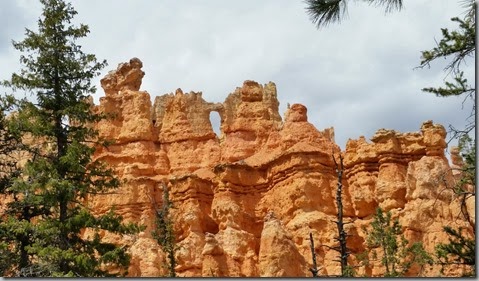 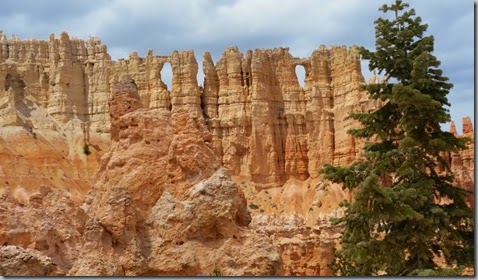 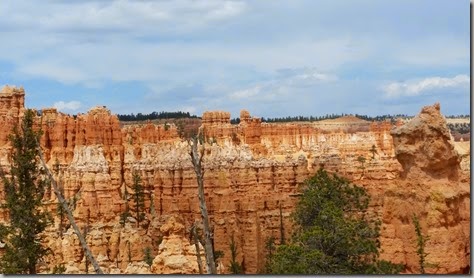 Kim had heard there was a restroom on the trail. She was happy to see it. It was just after that point we found a quiet place and had lunch. I was happy to lose the weight out of my pack. 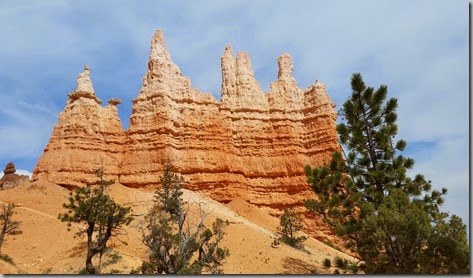 Here is a pano shot I took of the wall of windows:

Here is one of the many switchback climbs: 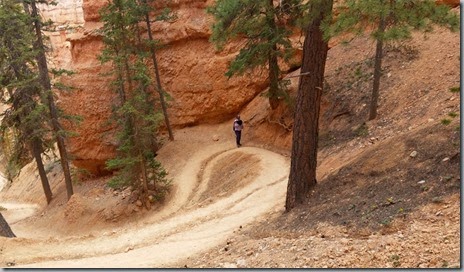 We got some energy back after lunch and hiked on and on and on. Our legs were shot at this point, but I knew in the back of my mind we still had the climb out of the canyon to go. 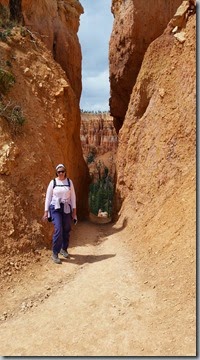 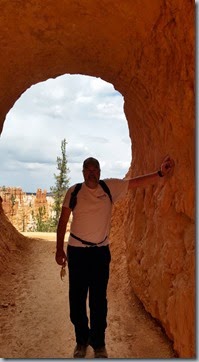 Here is evidence that we really did this. At this point we were just hoping to survive.

Oh no, not another set of switchbacks! 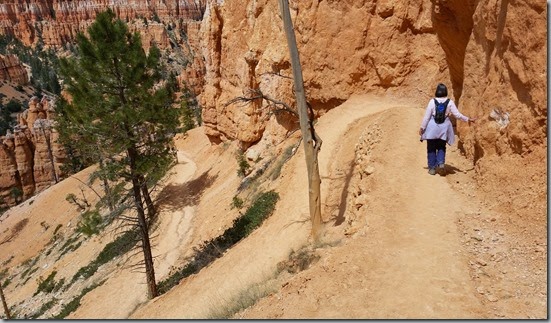 Every time I wondered if this was worth it, I just looked up and another “WOW” moment. 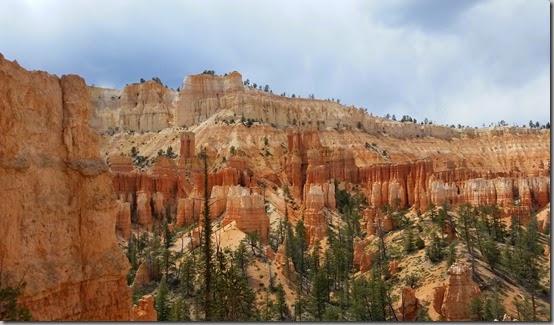 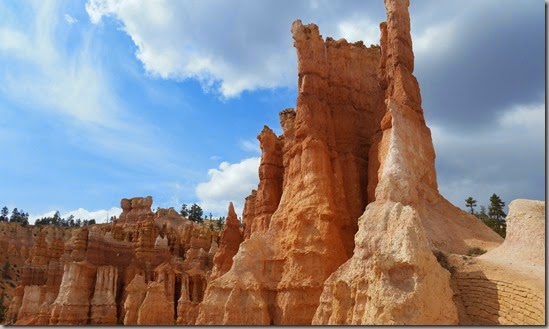 Another Pano, be sure to click on these and zoom in and scan them left to right. 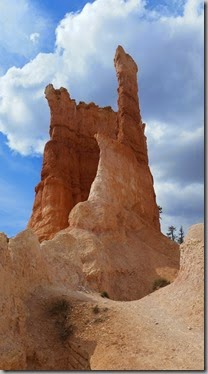 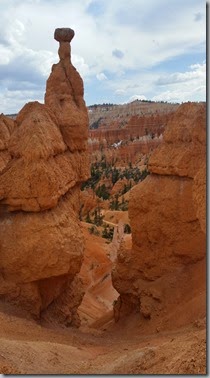 We finally made it to the end of the Peek A Boo Loop. That was the toughest 3 miles I have ever walked, but it was the most beautiful also. We sat down on a log and stopped for a long break. We needed to get inspired for the final push to the top. We entered Queens Garden and met a couple about our same age. They had just hiked down from the rim and looked fresh. They were very interested in our Full time RV adventure. They were really amazed that we could be happy living in a trailer. By the end of the conversation, they were asking about how to learn more. Happens all the time.

I did not take many pictures of the final ascent. We both just put our heads down and slowly plodded along. There were a few false tops and it was tough to tell Kim this was not the top. When I finally reached the top, I did my best Rocky impression raising my arms in celebration and relief. Kim was not quite as exuberant. I knew she was really worn out and her feet were hurting. She did awesome and the pictures and memories we have of this day were worth the pain and suffering.

We then walked the mile that was mostly down hill back to camp. We took off our boots and did not move much for a day and a half. It turned cold and we had some low temps around 25. Friday it only made it to 40.

People ask us which park is our favorite. We don’t pick favorites. Each park is unique. We look for what is special about each one. Bryce Canyon is special for the intricacy of the formations. It is just breathtaking. It feels like you are in an amazing temple. We feel that God did some of his best work in this canyon. This hike was really an inspirational experience. This post is dedicated to my mother in law Phyllis.

Well, what is next? On Saturday, we decided to take a drive. It all started out innocently enough, but it didn’t end up that way. More crazy adventure.

If you can, go take a hike today and enjoy all of the gifts we have. It is just awesome!

Posted by ktmissouri at 9:07 AM