We spent the week of July 20 at Cascara Campground in the Fall Creek Recreation area of Oregon. It was a very relaxing week. I did get a couple of fairly long bike rides in, but they are nothing like what my brother Alan did a couple of weeks ago. He rode something called the “Triple Bypass” in Colorado. You start in Evergreen and ride straight up to Squaw Pass at close to 10,000 feet then back down to Idaho Springs and then up and then over Loveland pass at close to 12,000 feet then down to Dillon and then up and over Vail pass at around 11,000 feet and then down to Avon. That is 120 miles of HELL! If that is not good enough, you do it in the other direction the next day! Alan got it done. Way to Go Big Brother! He just turned 58 years old. Way to make us all even more proud of you. 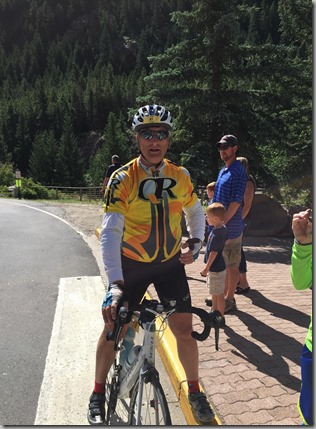 We had a water hook up right next to our trailer, so we decided it was time to give the truck and trailer a good washing. They look pretty good when they are clean. 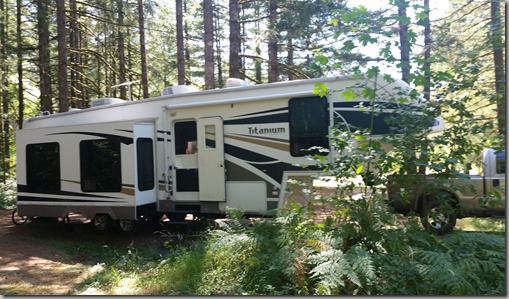 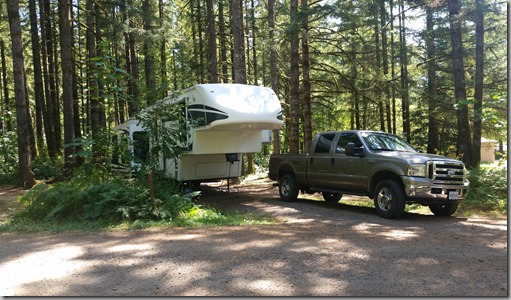 When we first got to Oregon, I noticed that a place called Washougal, Washington was just across the Columbia river from where we were staying. Why is that important? You ask… Well, that is the site of a famous (in my world) outdoor Motocross Track. They have a race each year at this track that is part of the National MX Championship Series. I have been to Supercross races, which are the indoor version of MX, but never to an outdoor national. I mentioned that to Kim and she suggested that I make it my birthday present and we should go. As we traveled through Oregon, I kept that in the back of my mind, but the places we wanted to go took us to the center of the state. I looked at it when we got to this campground and it was a 3 hour drive. I decided to go. It was going to rain, so Kim decided to stay with the trailer.

I got up very early (for me) on Saturday morning and headed north. I arrived at the track in a light rain. 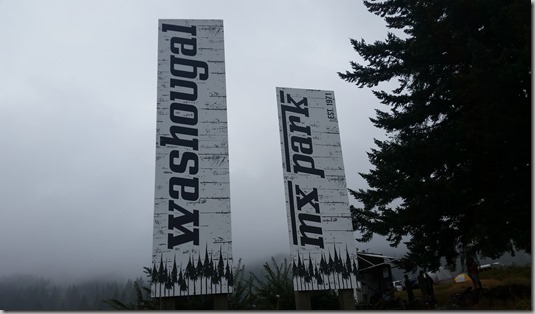 You can see the low clouds in this picture. The venue is beautiful. More beautiful than it looks on TV. These shots are for my riding friends. The elevation change on this track is insane. This is a huge uphill just after the start. 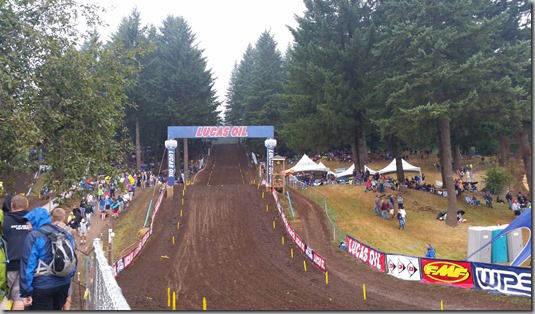 It looks flat in this picture, but believe me it is a cliff with a jump in the middle. I stood there and talked to a guy who’s son had qualified for the main earlier in the day. I did not get his name but his son is on #715 Kele Russell and finished 27th out of 40 in the second moto. We spent some time talking about the famous dirt and the track overall. Nice guy.

I tried to get some action shots, but the darkness and the fast riders made it difficult. Here are a few bad pictures to get the feel of this awesome place. Here is eventual 2nd place Justin Barcia hauling the mail. He is approaching a cliff jump. At the base it splits into two lines. It was my favorite part of the track. 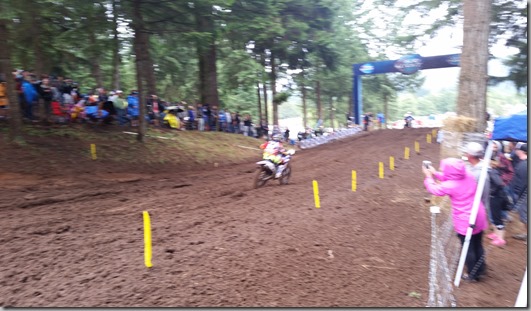 This shot from the other side. 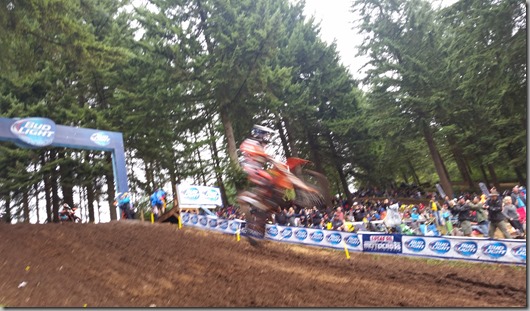 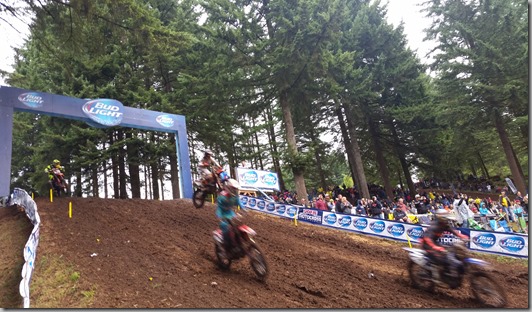 Then the split, where the 250’s were decided by an aggressive pass. 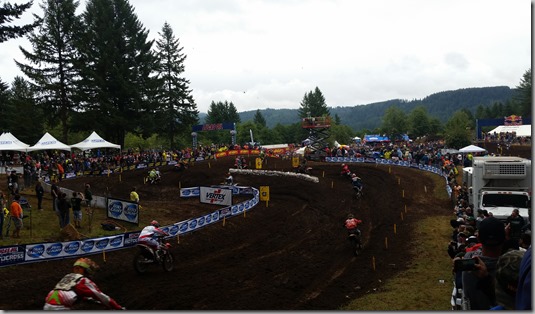 Here is eventual winner Ryan Dungy airing out his KTM over the big triple. 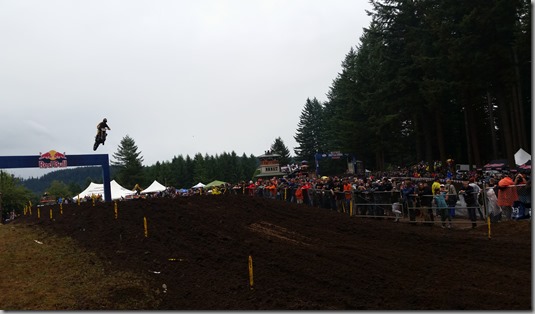 The rain picked up just before the first moto and the guys were riding in some deep mud. You know it is slick when the best riders in the world are struggling. Then the rain stopped and the track got tacky and the second moto’s were fast and awesome as the guys were able to get more aggressive. Here are a few more shots of the venue: 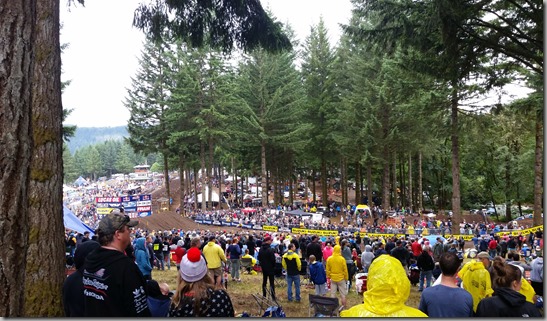 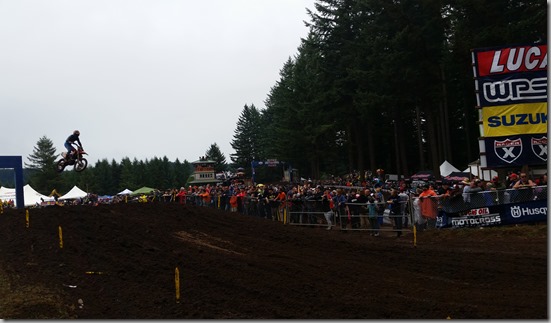 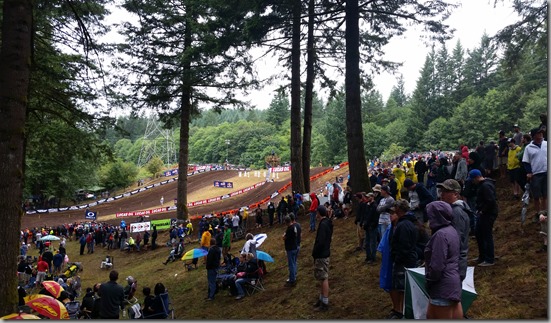 It was an awesome day for me. I know many of my readers don’t care about all of this, but to me this was a very special day and it was made better by my favorite brand (KTM) doing very well with a first in the 450’s and second in the 250’s.

If my day had ended right there it would have been an excellent day. But, I had to drive the three hours (or so I thought) back home. I knew it was going to be slow, so I waited in the parking area for a while to let it thin out. I have a little issue with patience and Kim would have been proud of me (at this point). After about 45 minutes, It looked like things had thinned out, so I got in the truck and started out. I got out of the parking lot in about  15 minutes and I was thinking this is going to be great. Then I drove for about 10 miles in the wrong direction because the police were directing everyone that way. I then turned on to Highway 14 that runs along the Columbia River. The traffic was still pretty heavy, but moving along. And then it happened!

The road department in the State of Washington decided today was the perfect day to close one lane and use a pilot car to slowly move traffic in each direction. It was unbelievable. The line of cars stretched on for miles. It took me over 2 hours to get through that section. As the song says. “ I am not a patient man and my patience had reached its end.” or something like that.  From then on my day went downhill, but I finally made it home at 10:30. What should have been three hours was more like 6. It was a long day. Oh well, I can laugh now – kind of.

We now have just one more day and then it is a move to central Oregon. One more step on our way back to the place of my birth to meet my parents. It will be the first time I have been back in that area with my parents since I was about 10. I am looking forward to them showing me around. We found something in Central Oregon that is very cool. I will tell you all about it in one of my next entries.

Take time and opportunity for those important things in your life.

Posted by ktmissouri at 1:14 PM