Our time in Orlando was winding down and I had one more thing I wanted to do. The only problem is that I have been getting over a minor cold and still was not feeling 100%. My last possible day was Tuesday, March 15. I got up a little later than I planned due to some coughing fits waking me up. I had breakfast and decided to go ahead and make the trip. Kim decided to go along, but not visit the space center. I think she was looking forward to the day on the beach without me. I am not sure if the beach or being without me was the primary draw.

We made the hour and a half drive over to the space center. Kim dropped me there and then headed to Cocoa beach. She had a pleasant day and as it turned out, so did I.

The Visitor Center at Kennedy Space Center is a fairly big attraction. You enter through an amusement park type gate and pay your fee. The cost is $50 for adults. I did not notice that you get $4 off if you are 55+. Oh well, I donated $4 to the effort. 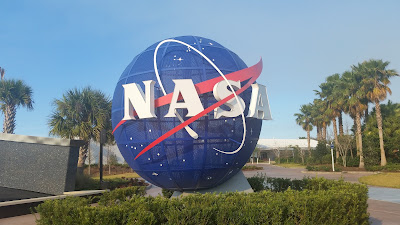 I have to start here by saying that my knowledge of the history of NASA and US space flight is above average. My father worked for McDonnell Douglas during the Apollo program and he educated us as things went along. That education has been the basis for my continued thirst for knowledge over the years. I won't spend much time in this entry retelling history. I will just identify some of the artifacts and connect a few of the dots.

After coming through the gates, you walk into an area they call the Rocket Garden. It is full of older rockets dating back to the first flights. There is a Gemini Rocket and even a Saturn 1B laying on it's side. The Saturn 1B was used in some of the Apollo missions to test some technology before they would use the Saturn 5 to go to the moon.

There was a person giving a tour of the rocket garden. His knowledge was fairly good, but he really had to keep it pretty basic for all of the uninformed tourists. I quickly lost interest and went on my own. As a matter of fact, I did not talk to anyone all day. A banner day for all of mankind! I just enjoyed the sites and cringed every time I heard someone inform their party incorrectly. Yeah, I guess I am a rocket snob.

After the rocket garden, I went to get on the tour bus. They take you out to get an up close look at the Vehicle Assembly Building (VAB). The VAB is one of the largest buildings in the world by volume. The pictures do not capture the size of the building. The Flag painted on the side is the largest painted flag anywhere in the world. The building is 525 feet tall.

After seeing the VAB, we saw a crawler. I was surprised to learn that the crawler moves along a gravel path. They get special creek gravel from Tennessee. The reason they use this gravel is that it will not spark. Sparks would be a bad thing with a fully fueled rocket.

We then headed over to Launch Pad 39B. Launch pad 39A is going through a major refit, so 39B is open for tours. 39A was used for all of the Apollo launches. The towers are to protect the vehicle before launch from lightning strikes. 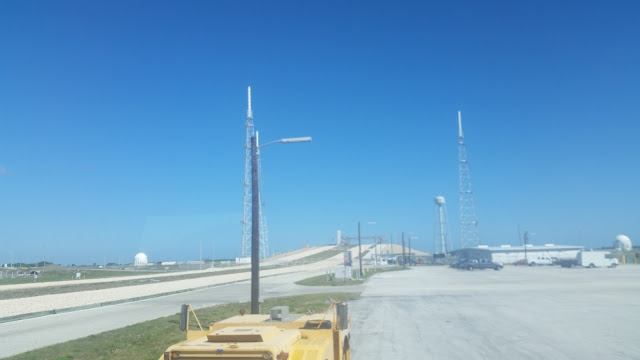 These slightly used blast doors were pretty cool to look at. 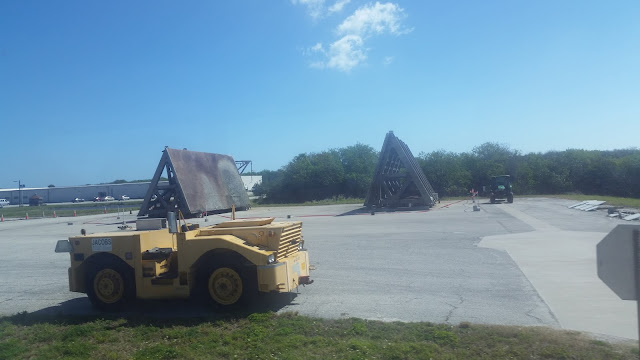 Then we headed to the Saturn Building. On the way we went by a small pond. Nice gator. 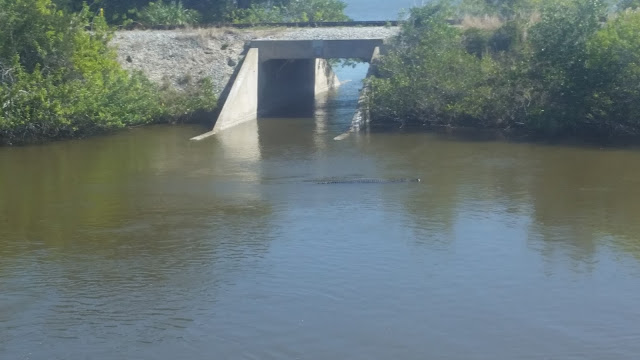 Before you get to see the star of the show, they bring you in a room where the original Launch control
has been preserved. They use original voice sound tracks to explain how things worked for Apollo 11. The technology, or really the lack of technology, is pretty amazing.

Then we were let into the main room with the Saturn V. I was in awe! This is what I came to see. The pure size and power are just awesome.

The S-1C only burned for 165 seconds. It generated 7.6M lbf of thrust. Sorry, too much. This is the first real Saturn V I have ever seen. It was everything I expected.

I took pictures of each component. I remembered the Saturn V that my dad built on our kitchen table while the Apollo 11 mission was happening back in 1969. He would build each stage and tell us all about them. Thanks Dad!

Then the star of the show. The S-4B. The third stage. This is the part built by McDonnell Douglas. Dad even got to go to the Cape before Apollo 11, 12 and 14.

One of the jobs of the third stage was to carry the Lunar Excursion Module (LEM). They had the LEM that was scheduled to be used in Apollo 15, but was replaced by an updated model.


They had mock ups of the Command and Service modules, but the Capsule (Command Module) below is much more cool. It is the original from Apollo 14. Just slightly used and a bit crispy.

They had original space suits and a Lunar Rover. This one was an extra, but the rover was used on Apollo 15, 16 and 17. There were many other artifacts in this section. I really enjoyed checking all of this stuff out.


Next up was the bus ride back to the main area and then the Space Shuttle area. This is where they have Atlantis. Atlantis is set up in a very cool display with the bay doors open and the arms extended. Atlantis is the veteran of 33 missions. It is showing the wear, but it is amazing that they engineers were able to reuse it that many times. 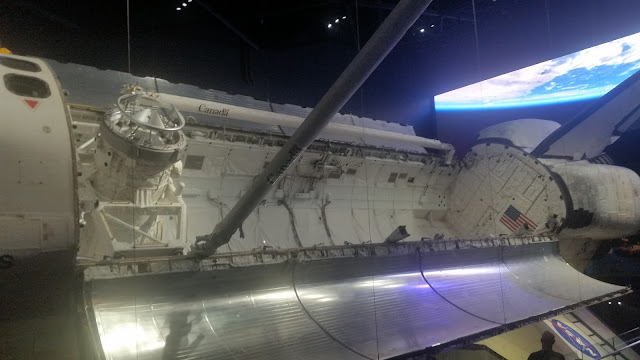 There was one section that was difficult to walk though. This is the area that payed tribute the the lives lost in the shuttle program. They had parts from Challenger and the front window frames from Columbia that were recovered in East Texas.

They also had an area outside that was there to commerate all of the lives lost during the American space program. 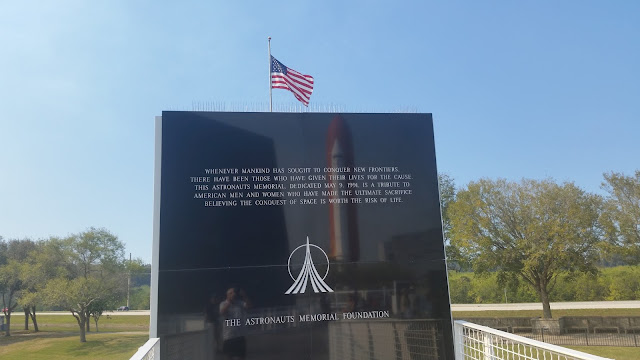 As I have written this entry, I have remembered many things about my day at KSC that I had forgotten. It really was a special day, even if my attitude was not up to par. I think I will end this entry with a picture of the coolest RV ever. An Airstream that is used to move astronauts to the pad. Recently it was scheduled to be replaced, but the astronauts decided to keep the old unit in service. 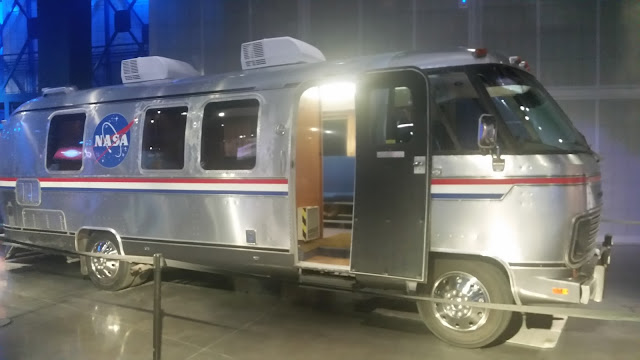 Sorry for the long entry, but KSC just needed that much. The next day we were scheduled to move on. Come back to see where we went from Orlando and how much we missed being on the road. 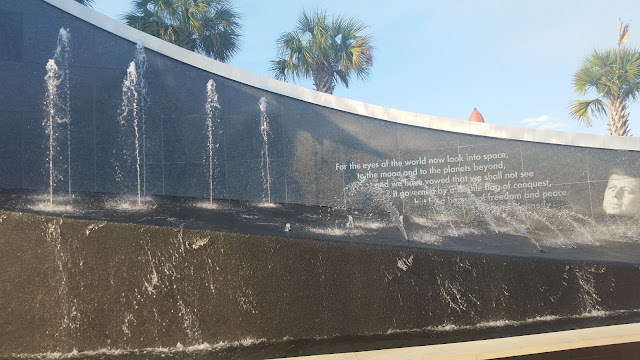 Posted by ktmissouri at 2:29 PM