On August 19, we decided that we were ready for another hike. This time we would go a bit further. We selected the Cascade Falls hike because it was about 7.5 miles round trip and did not have too much elevation gain. Kim would debate that last point. Hey, we are in the mountains...They do go up.

We got our normal late start and made it to the trail head around 10:30. The trail head parking was full, but we found a place just down the road.  It began as a beautiful day, that would change. The walk started with a downhill. We both knew that meant an uphill at the end of the hike. Then it leveled off and it was just a nice walk through meadows. At the 1 mile point we came to this beautiful little stream. I could see the fish in there. I said then, I would be back, fly rod in hand. 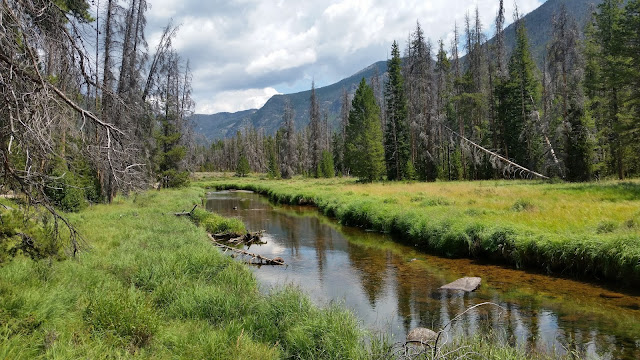 Here is a shot of my lovely wife by this lovely stream. 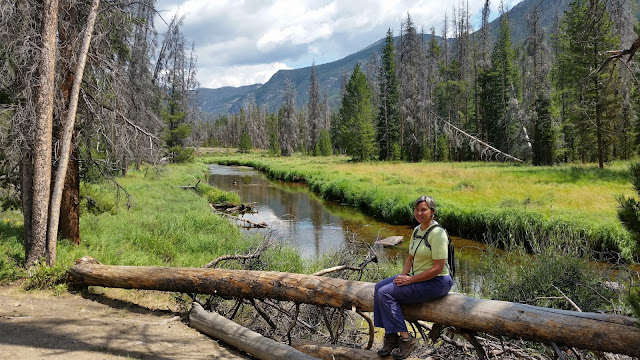 We continued up this valley. Soon we were surrounded by large rock outcroppings and the trail would start to get more rocky. 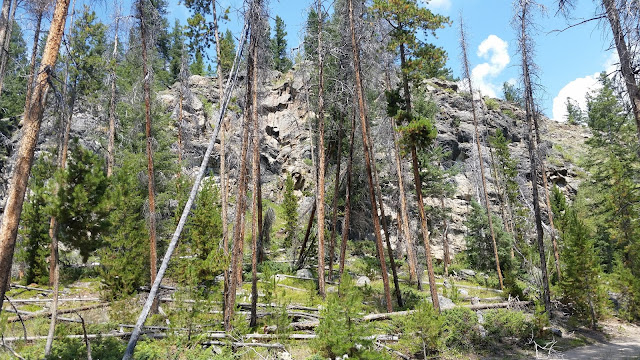 We came to the top of a small hill and had a nice view of the valley and surrounding mountains. Another couple joined us there and we took pictures for each other. 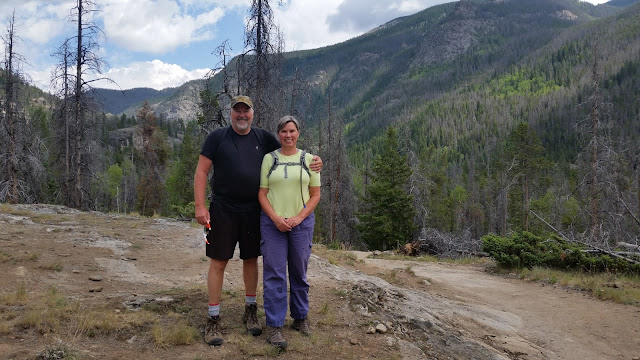 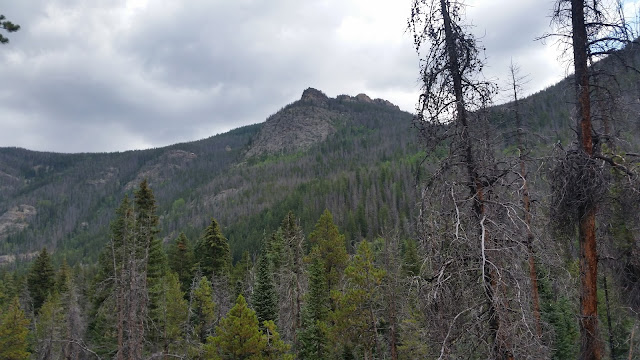 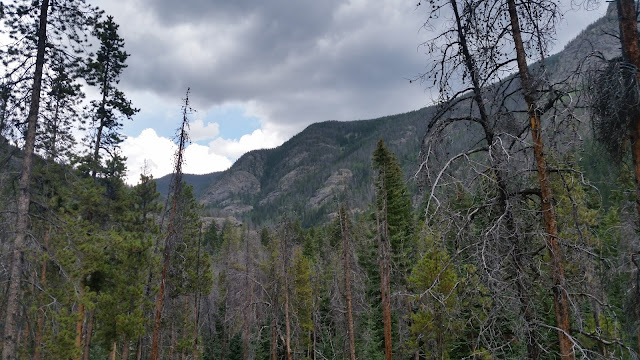 The trail continued up the valley and was fairly steep at times and got a bit narrow. It was beautiful. 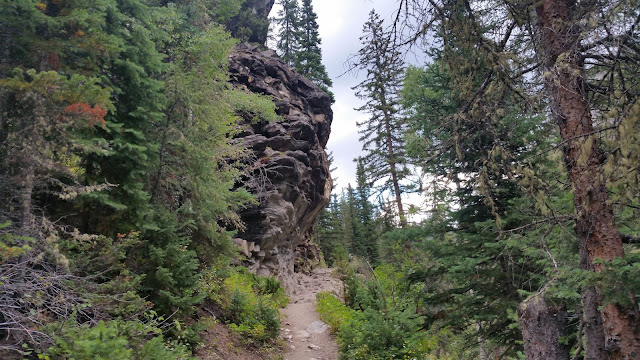 As we continued up the valley, we could begin to hear the sound of water crashing through the rocks in the valley below us. We would periodically get a glimpse of the water through the trees. We were looking for the waterfall, but the views above us were breathtaking...or was it that we were having trouble catching our breath in the high mountain air. 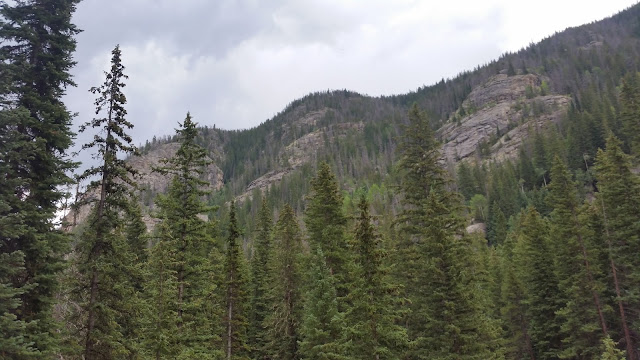 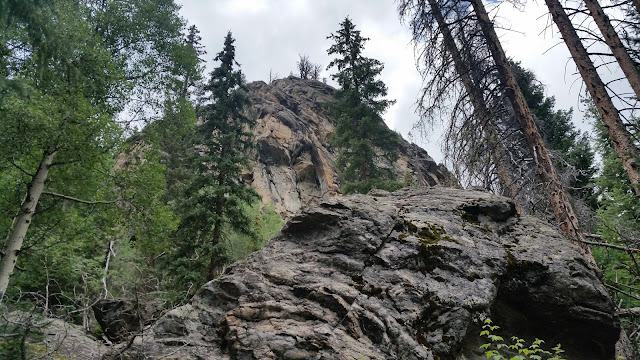 We finally made it to Cascade Falls. It was very pretty, but tough to photograph. There were lots of individual falls that all together were beautiful. We found a nice place to sit on a big rock right next to the falls. 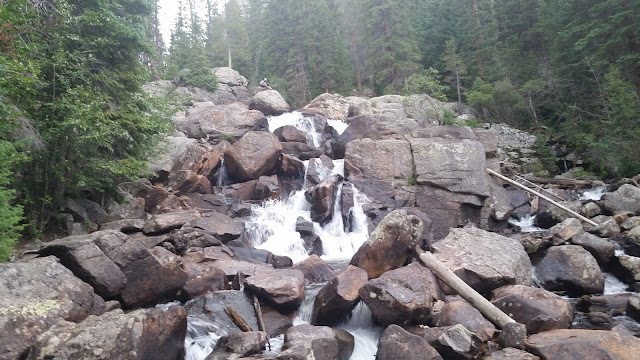 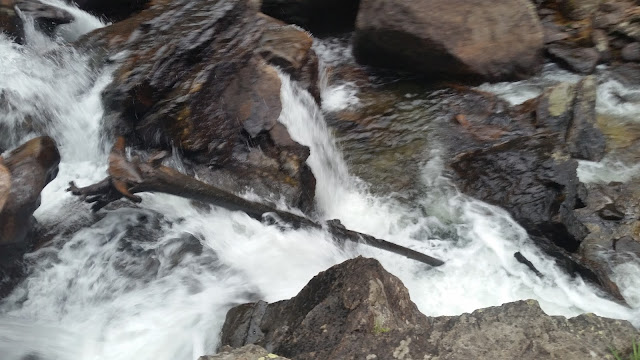 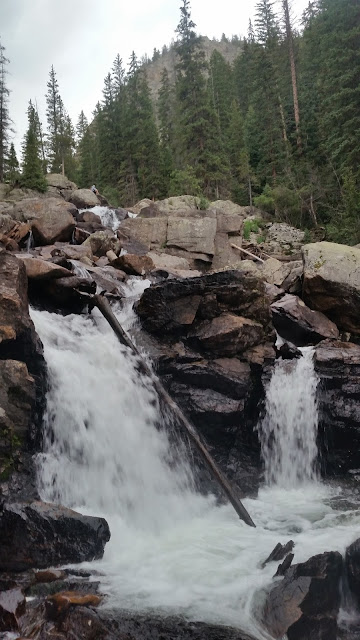 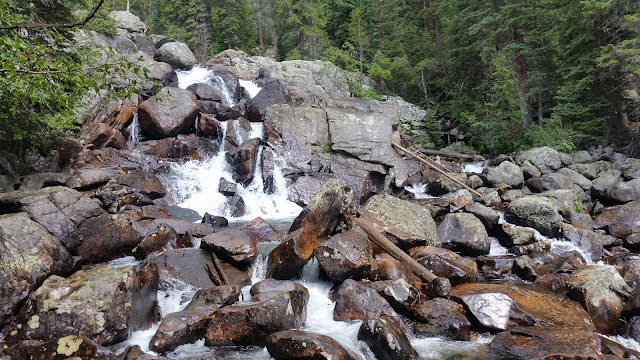 While we were eating lunch, we started hearing some thunder. We were almost 4 miles from the truck, so we put on our rain coats and found a dry place under a tree. Those spruce trees provide great cover and we did not get wet at all when the rain came. It rained for about 15 minutes and then just sprinkled off and on for the rest of the hike.

The rocks glistened in the sun that was now breaking through the clouds. It was beautiful. 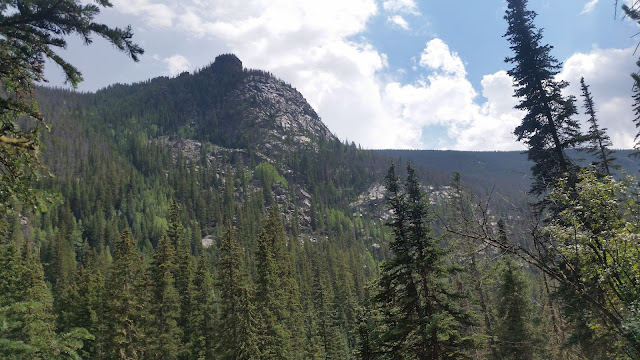 We decided to start back and very quickly we noticed that things were different after the rain. First off, we were all by ourselves. There were a few others out on the trail, but they had gone back. Then we started seeing wildlife. I guess they knew the people would leave and they came out. First a few deer by the side of the trail: 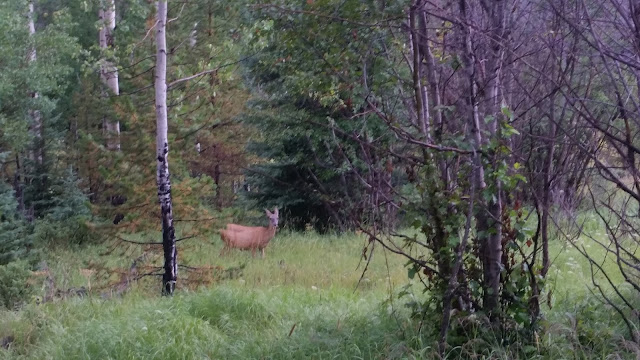 This one was not shy at all: 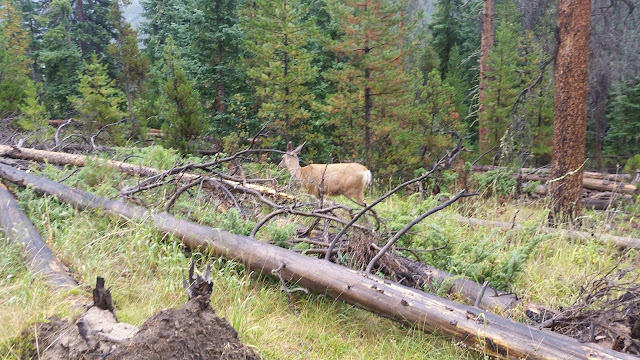 Then a mother with two late season spotted fawns. The spots were almost gone. 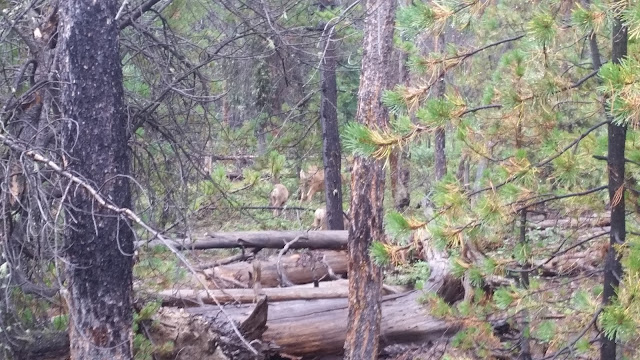 We were walking down the trail when we saw a guy in the trail motioning for us to be quiet and come quickly. There were to very large bull moose standing right by the trail just in front of us. We approached slowly and were ready to run, but the moose just stayed there and ate the tall grass. We had to walk by them on the trail. They were about  20 feet from us. They started to move around, but did not seem agitated and were just looking for better grass. Here are a bunch of pics of the encounter. 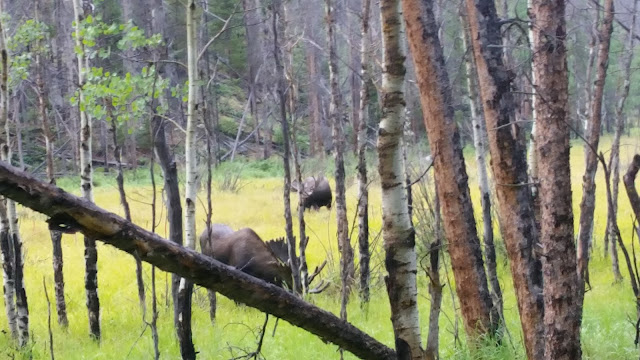 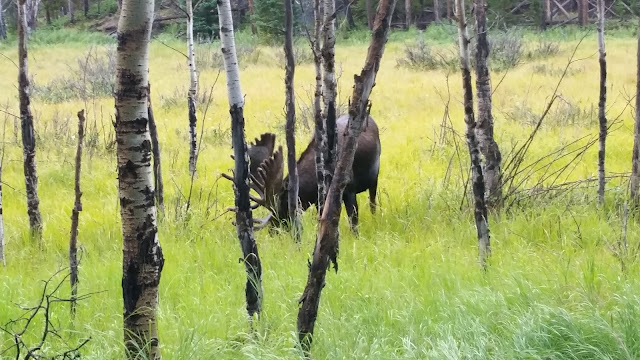 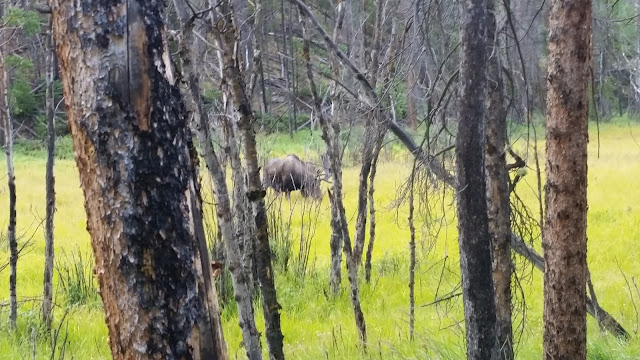 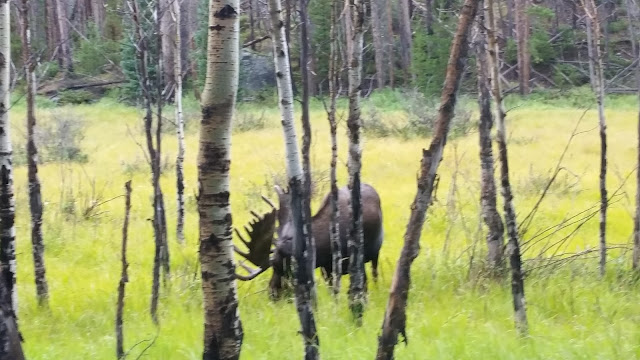 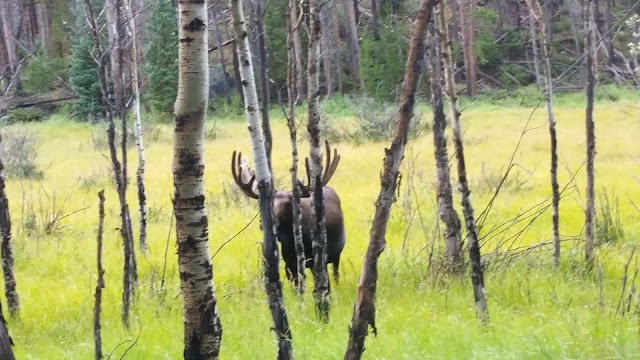 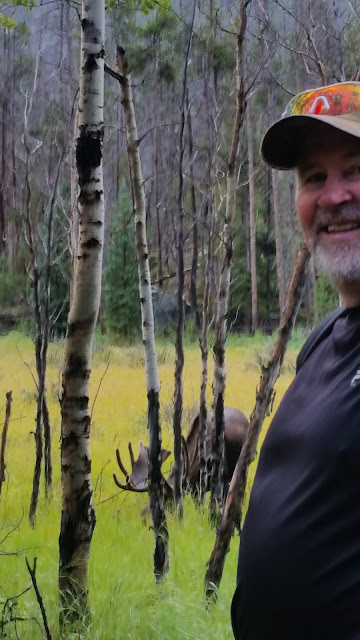 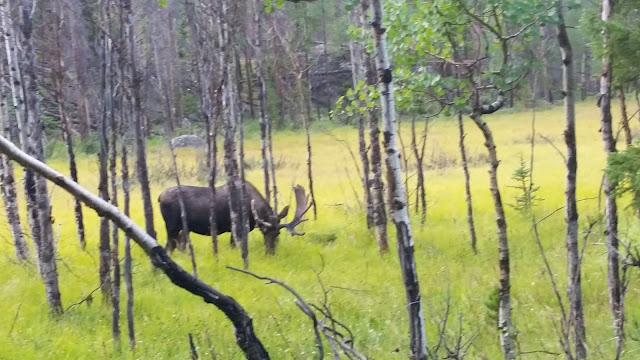 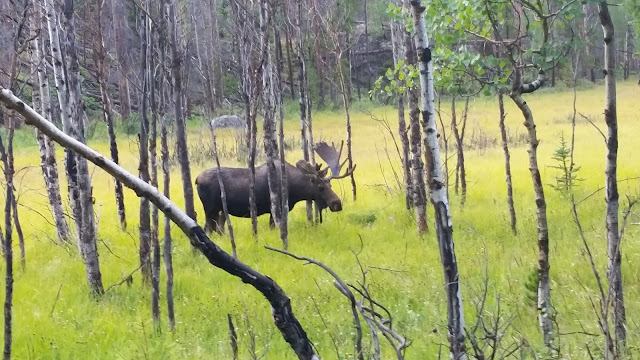 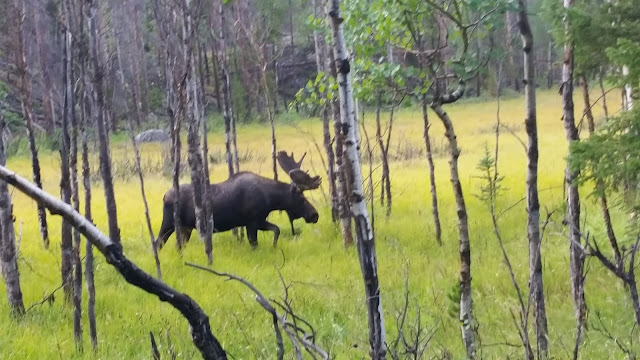 All of those pictures were taken standing on the trail with my phone. No telephoto lens, just the wide angle on the camera.

It was an awesome experience. I have heard for years how mean a moose can be, but these seemed very mellow. I guess they were not ready to mate yet. I am also sure these see plenty of tourists in this area and know they are not in danger. This was one of the top 10 experiences in all of our travels. Just amazing.

We headed back to our campground and were relaxing after the long hike, when we heard more intense thunder and saw lighting all around the lake. Then the hail started. Soon the ground was white with hail. 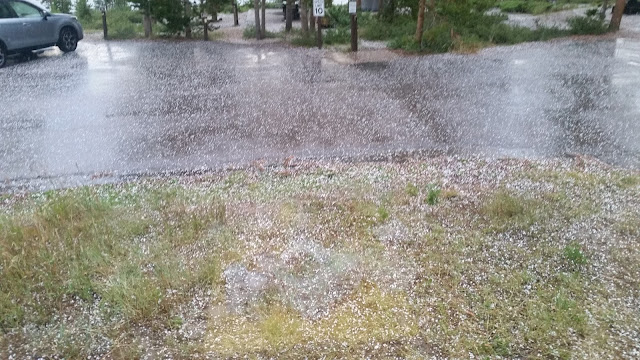 The hail did not get too large and thankfully we did not see any significant damage around the camp. Dad tells me that it is rare to have large hail up in the mountains. It does not have time to accumulate much ice when it is falling to a higher elevation. Good to know.

Well that is it for this very memorable day. We still had much exploring in RMNP we wanted to do and I really wanted to get back to that little stream to fly fish. Stop back by to see how much of that we were able to do in the coming days.
Posted by ktmissouri at 9:47 AM