We are now back in Missouri and I need to get this blog caught up. I have a lot to write about and some awesome pictures and video to edit and publish. I was expecting to be really busy when I got back to the ranch, but someone had other plans. I pulled my hamstring muscle in my leg yesterday while water skiing. I can barely walk. I am really hoping it heals quickly, but we will just have to be patient. The good news is that I will have time to write and get caught up. Now back to the blog...

On September 3, I decided to take a ride on my DR 650. There is a scenic loop that begins and ends in Vernal, Utah called the Red Cloud Loop. The loop starts by going by a large phosphate mine and then up in to the mountains. After about 20 miles of pavement, it turns left into the Ashley National Forest. The area around where we were camped was very much a high dessert. As soon as I entered the forest, we had pine trees and large hills with mountains in the distance. 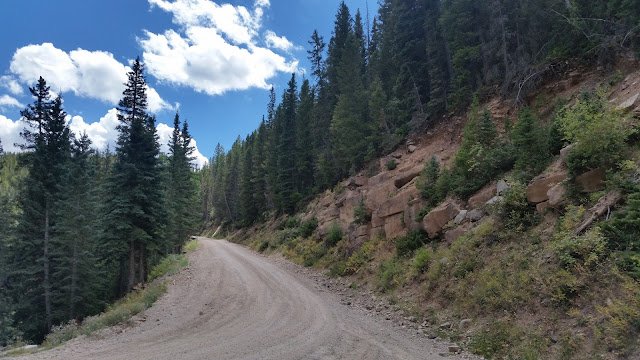 As you can see in the picture above, the road was mostly smooth gravel. I was enjoying the scenery. There were ORV trails going off the side of the road and many portions of the road are legal for off road vehicles. This being the Labor Day weekend, I saw many groups of RV's and tent campers in dispersed camp sites along the road. This would be another great place to come and camp for free and ride the roads and trails of the forest.

I rode for a long time on the smooth gravel and then I just couldn't stand it any longer and had to hit one of the side roads that had a sign for a mountain top overlook. I rode for a bit and then it got tough. Big rocks and some big mud holes thrown in. It was fun, but I was once again on the wrong bike for that kind of riding and I was by myself, so I turned around. 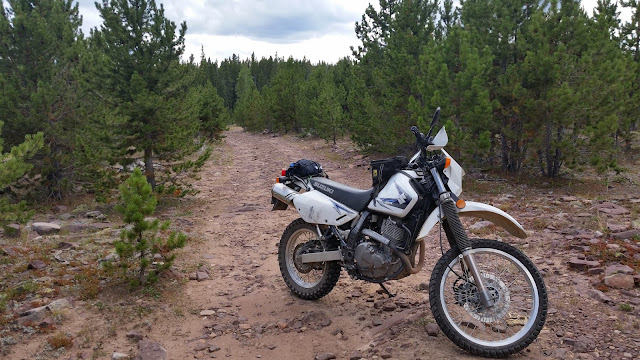 I took this shot just before I got back to the main road. Notice that I have my riding jacket strapped to the back of the bike. The jacket would be needed later on this day.

I was at an elevation of just under 10,000 feet and the aspen trees were just beginning the change. I tried to get a few shots. 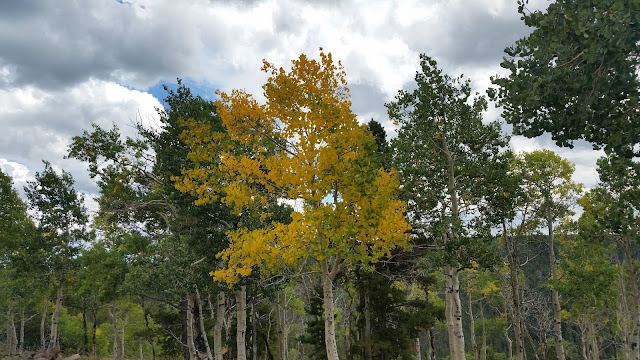 Most were still green, but this one was just ready early. Here are a few shots at an overlook. 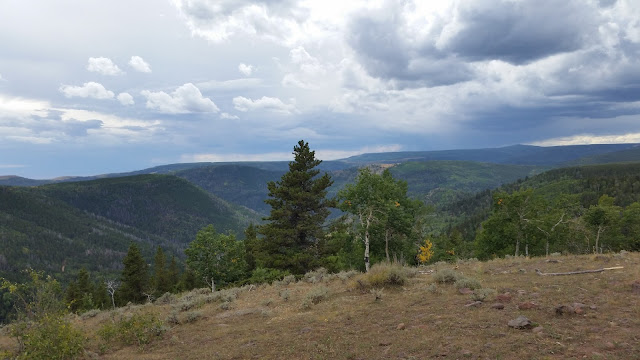 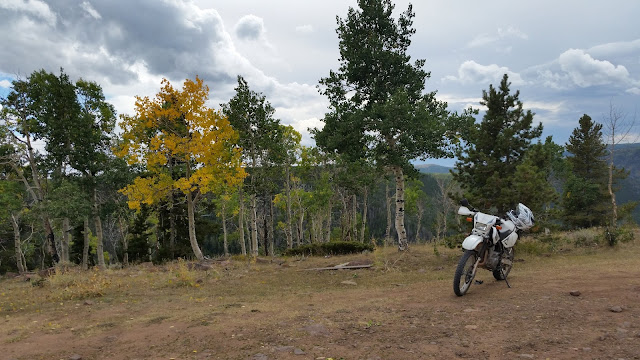 After the overlook the road got pretty steep and headed down a canyon. It was a beautiful ride through tall rocky cliffs on both sides. 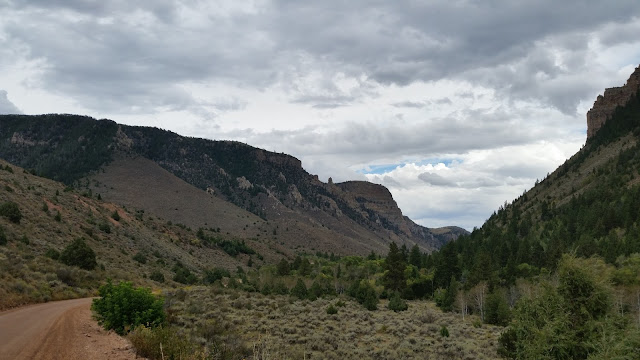 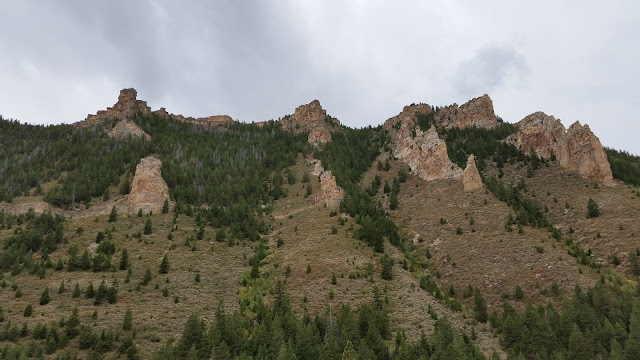 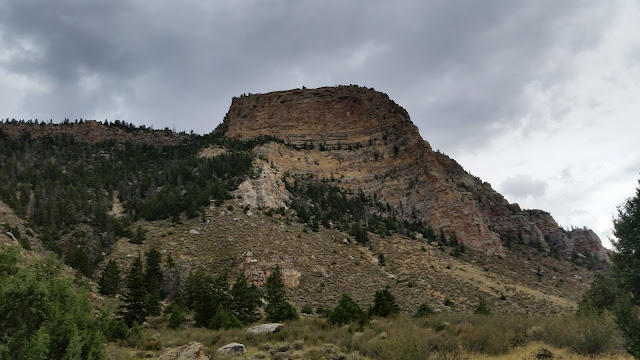 As I got further down the canyon, the are turned back to a more dessert environment. This section is BLM land and has some improved free camp spots. I had to stop and check out the one below. The surrounding rocks were beautiful. The amazing thing was that this camp site was not occupied on a holiday weekend. 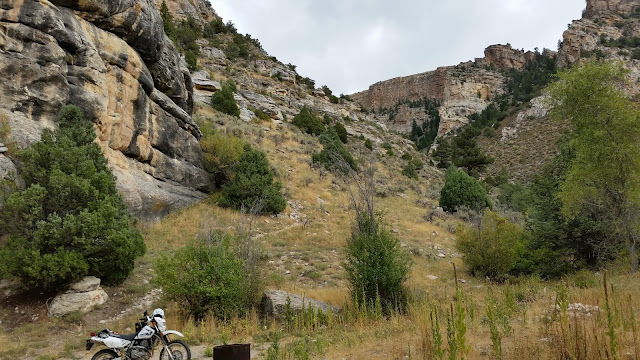 At this point, I was not far from Vernal. I had been looking at storm clouds all day and was happy they had stayed to my south. Well, my luck changed and the storm closed in on me in a hurry. It went from being cloudy to very windy with wind rain and hail in about 5 minutes. I had put my riding jacet on at this point and I was sure glad to have it. I rode the last 15 miles in a driving rain storm and some high water. It was ... exciting, yeah let's just use that term. I made it back to our site and I was soaked to the bone, but safe. I jumped in a hot shower and all was good. I ended up riding almost 100 miles on the day.

The campground had filled right up for the weekend. We had this very nice couple that was camped next to us. This was the maiden voyage for their new camper. I gave them a little bit of advice and answered a few questions. Here is Cannon and his wife and son. Their daughter was back at their trailer. 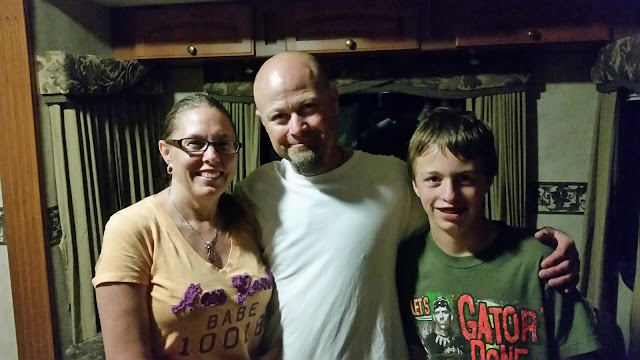 As I have said many times, we just love meeting new people and these folks were great.

Next up is something we have never done before this trip. We went camping!