It has been a week since I last posted and it seems like a long time since we were at Hot Wells Dunes, which I wrote about in my last entry. I am writing this on January 17. Yesterday we arrived at Quartzsite, Arizona. Most RVers know of this place. We are camped here all by ourselves and totally surrounded by thousands of RV's. All at the same time. It is a very unique feeling, but I will explain in later entries. First, I need to get caught up.

We left Hot Wells Dunes on Sunday, January 8. We went about 90 miles to a Kartchner Caverns State Park. We were very impressed with the facilities when we arrived. Maybe it was just that we had been in the desert for the past two weeks without hookups, but this place is very nice. The visitor center is the nicest I have ever seen at a SP. We did not have reservations, but had looked on line and it looked like they had plenty of availability. When we arrived, the lack of a reservation was no issue at all and they quickly got us checked in. The cost of a Water and Electric site is $30 per night, which is a bit high, but there is no day use fee or anything else. The campground is very well maintained. Here is a shot of our site: 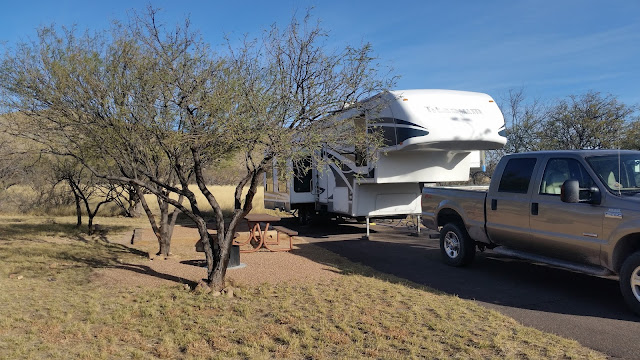 The view from the campground is some large hills/mountains. 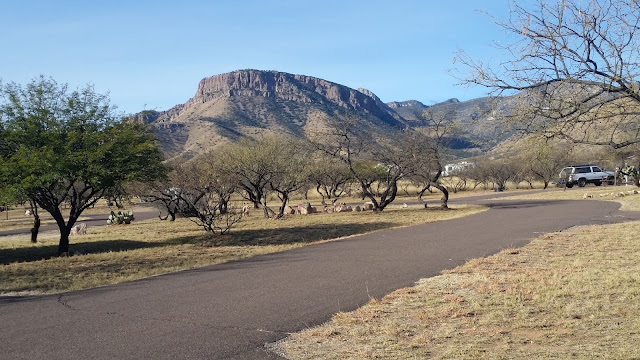 It is funny how we act after plugging in to the sweet nectar of electricity. We use the toaster, we use the heat just because we can. We felt a bit crowded, but only in comparison to our desert camping spots. The sites are very well spaced.

On Monday, we decided to take a tour of the caverns. There are two tours and they are about an hour and a half each. The cost is $23 per person per tour. We went for the Big Room tour.

We have toured many caverns in our travels and this one is very different. This cave was only discovered about 40 years ago and was not open to the public until about 1990. The cave has been very well preserved. There are airlocks going in and out. You can not touch anything inside the cave. We really appreciate the effort to keep it as it was found. We saw what can happen to a cave if you let people do what they want when we visited Lewis and Clark Caverns in Montana. That was just sad.

I have no pictures of the cave, because they will not let you take a camera inside. Maybe it is because we have seen so many other caves, but this cave was nice, but in my opinion not overly impressive. There are many intricate formations, but not the size and grandeur of Carlsbad. You are also on a very closely monitored guided tour, which felt a little regimented. The guide was very knowledgeable and we enjoyed the tour, but we decided that we did not need to do the second tour.

On Tuesday, we decided to take a driving tour of the area. We drove south through the town of Sierra Vista. We stopped and got a card mailed it to our grandson Will. Happy Birthday Will.

We then did some shopping and had lunch. I guess that is what you do when you are back in civilization. We then headed south to the town of Bisbee. We were told by our friends to check it out when we are in the area. Bisbee is an old mining town and we enjoyed walking around and looking in the shops that were open on this weekday. It was pretty quiet and there was not much going on. Here are a few shots: 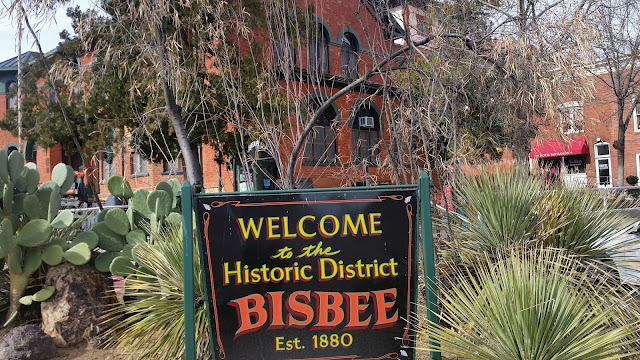 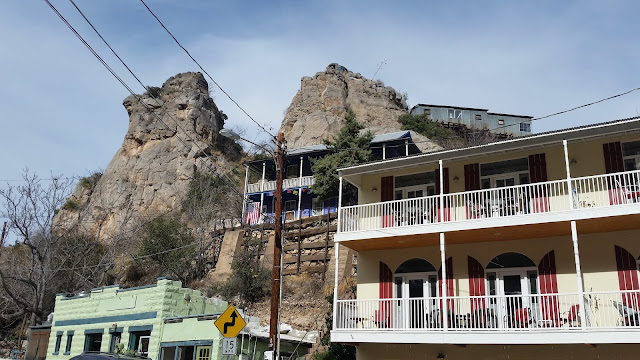 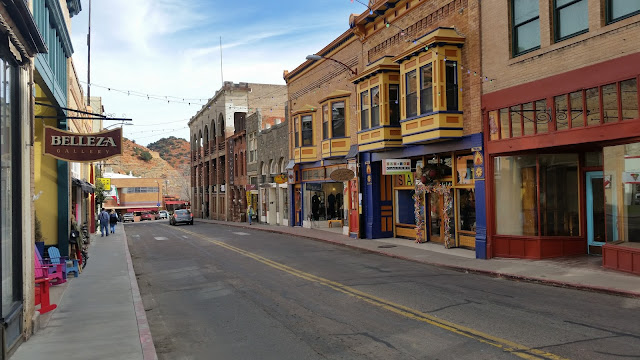 We have to admit, we are not very good tourists. We like history, but it needs to be told in a accurate and balanced way. We generally like to look around a town like Bisbee for an hour or two and we are ready to move on.

We then took a very interesting drive through the mountains and out to Tombstone, Arizona. If Bisbee was a tourist town, Tombstone was double that. We did the same two hour walk around and enjoyed walking through the buildings and shops. I really liked some of the Native American art. I guess part of the issue is that we are not going to buy anything, so shopping seems a bit pointless. Tombstone is of course home to the OK corral and the famous shootout. It kind of tuned me off when you had to pay to see the corral. 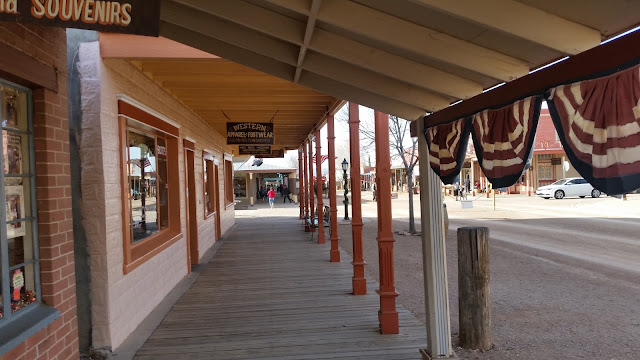 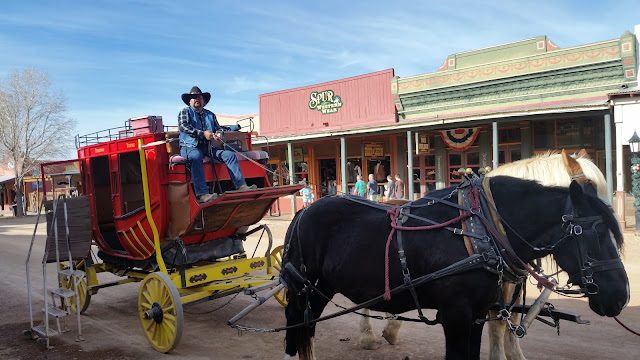 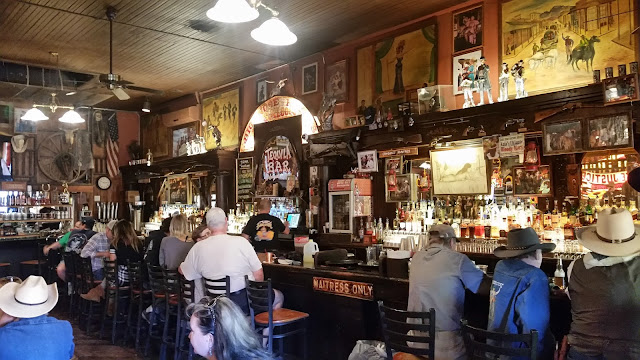 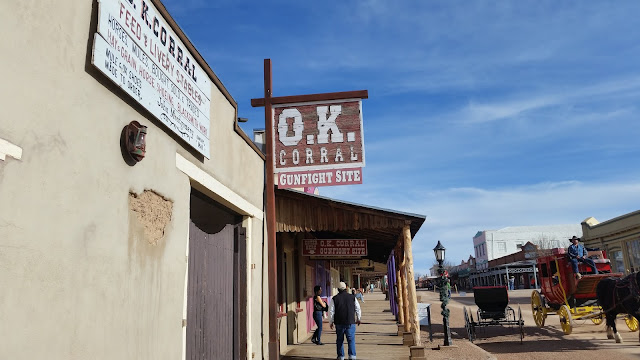 I really don't want to sound negative. We had a great time on this tourist day. We want to take side trips like this and see all of the sites. You never know what will interest you. To some people, this is what they like. To us, we would rather see a bit older history and more natural beauty.

We made one more stop before we made it to Quartzsite. We decided to make a stop near the big town of Tucson. The good news is that we were in a great park right next to Saguaro National Park. I will write all about that in my next entry.
Posted by ktmissouri at 11:31 AM