I am writing this entry on April 24 from Datil, New Mexico. We are staying at a nice BLM campground in a pine and juniper forest. We are moving along highway 60 on our way to the DFW area of Texas. Update: I could not get it to upload in Datil. We moved today, April 26 to Fort Stanton, NM. The connection is slow, but it at least worked.

We were very excited when we arrived in Williams, Arizona on April 17. We were wanting to do the train ride to the rim of the canyon, but when we found out they were full, we were fine with making the drive. We don't like being on a schedule and the train would do that. We have both been to Grand Canyon before, but we love the place and were looking forward to doing the one day rim tour again.

I got up early and checked my email and was very distressed when I saw a note from my Dad. He sent me a news article about the loss of two hikers in the Grand Canyon. These were two hikers that one of which, I know personally.

In September of 2016, I went to Vernal, Utah to see a special person about an issue I have with my hiking boots. That person is Randy Merrell. He was one of the founders of the Merrell shoe company. He left the corporate world and went back into practice in Vernal doing custom boots and other orthodic devices. I wrote about my visit in this entry:

I spent two great weeks in Vernal and spent about 4 hours in the office with both Randy and his wife Lou-Ann. They were very friendly and I enjoyed working with them. We had time to talk about personal things like our lifestyle. They have also been married for many years and have a large family.

Lou-Ann and their grandson were the hikers that were lost while hiking in a remote part of the National Park. I can only imagine what Randy is going through.

I was stunned and it really put a damper on my mood for the day. Kim could tell I was having issues and suggested that I go be by myself for a while. That is a nice way of saying she didn't want to be around me while I was in a bad mood. I went out to the rim of the canyon and looked out at the amazing and wild canyon and thought and prayed for a long time.  As of this writing, they have not been found and are presumed to be dead. My prayers go out to Randy and the rest of the Merrell family.

I walked back to the visitor center and sat down to watch the movie. Just before it started, Kim walked in and sat down next to me. The movie was great! It is the best way to start a visit to a National Park.

We then went back to the rim at Mather Point. We decided to walk the rim trail all the way to Yaki Point. It was a nice walk and just what I needed. I took a bunch of pictures. The canyon is just magnificent. 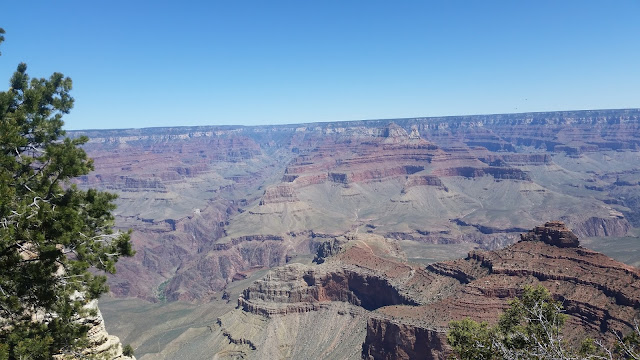 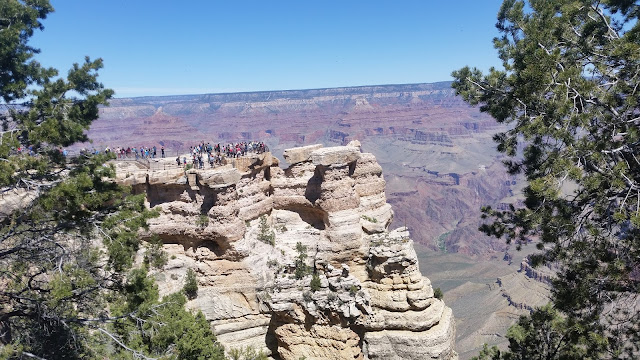 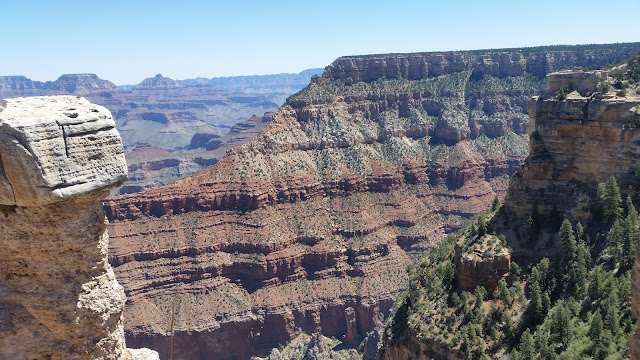 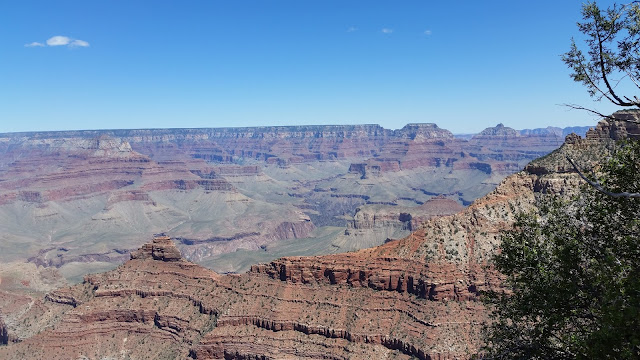 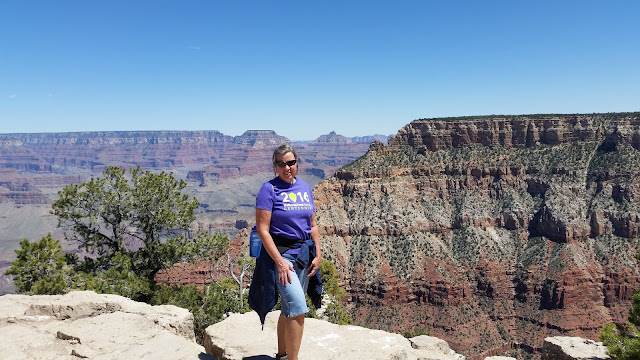 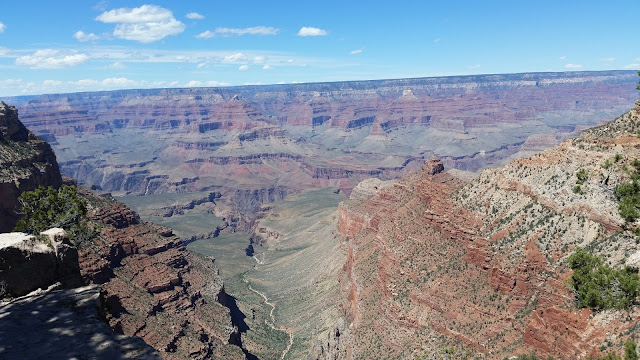 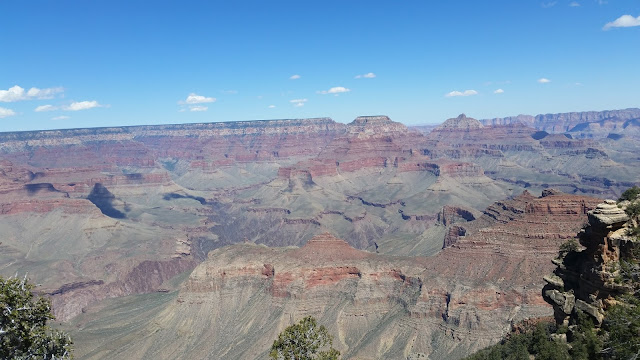 You can see part of the South Kaibab trail in the next couple of shots. I hiked part of this trail in a visit back in 1985. I would love to go all the way, but I know I am on my own for that trip. 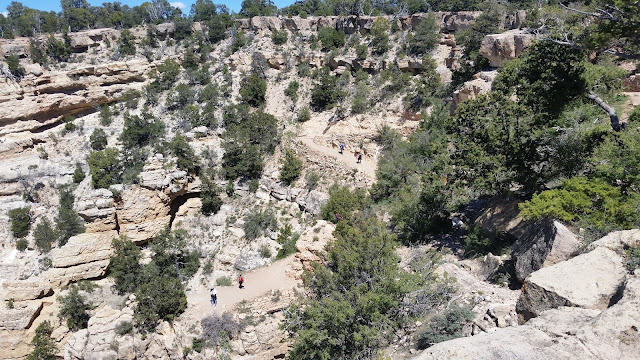 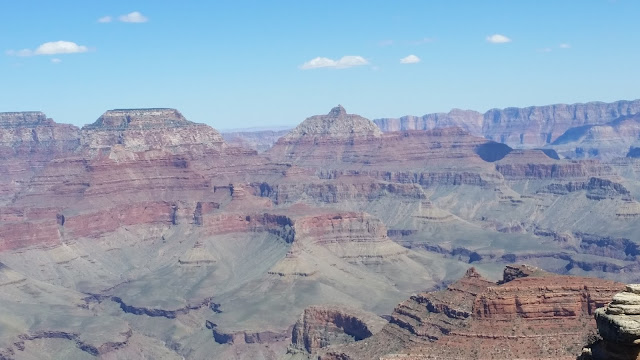 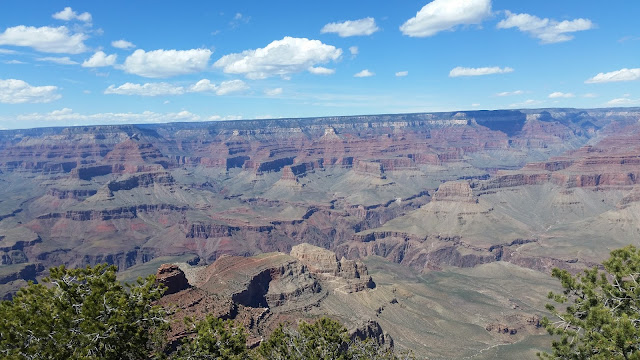 We then took the shuttle bus back to the truck to eat lunch. We were now ready to head to the other section we had planned to see on this day. We took the bus to the Village and started walking the rim trail to Hermits Rest. We did not make it all the way to Hermit's rest, but we did see all of the observation points along the red route. The scale of the view is hard to imagine if you have not been there. I, of course, took a bunch more pictures. This is also the trail head for the Bright Angel Trail. I took a few pictures of that trail. 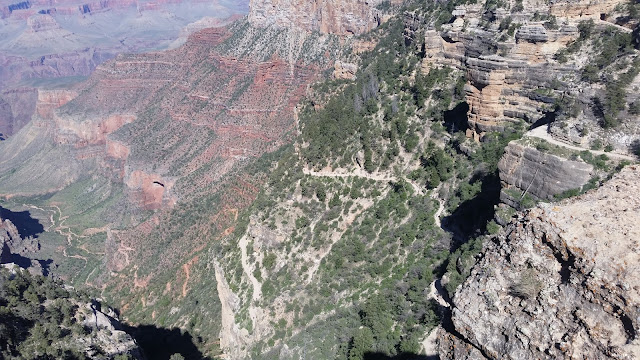 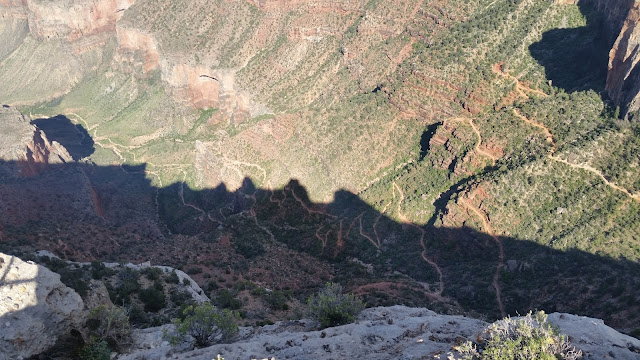 I just have to include these: 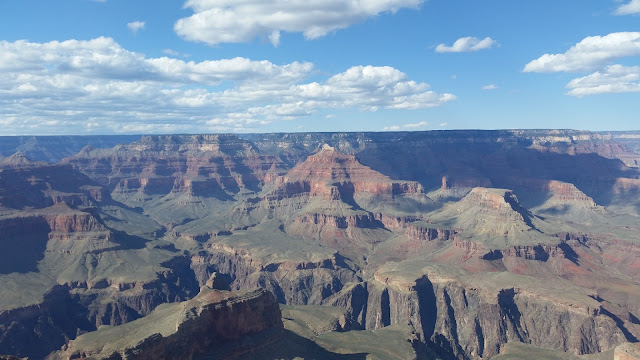 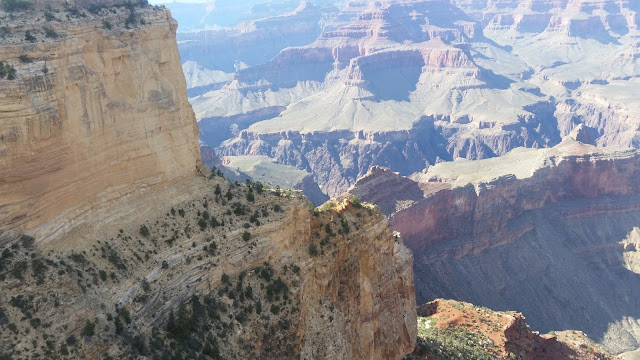 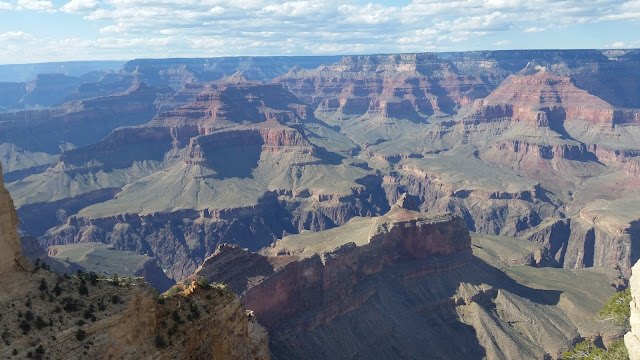 Shot of the Colorado far below. 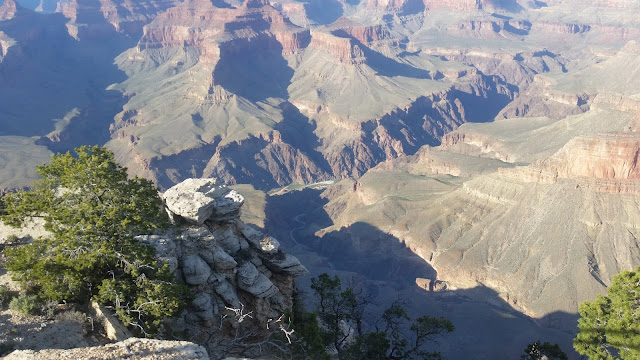 It was getting later in the day and the shadows were creating some interesting shots. 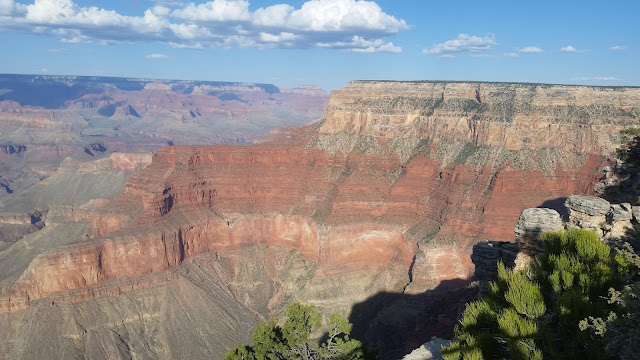 We ended up walking about 8 miles along the rim and had a good visit to the canyon. We know we acted like people on vacation and just saw all of the viewpoints, but this did get our adventure juices flowing. We are planning to come back to Grand Canyon and doing a real adventure. I am not sure what that is or if we will do in together.

Grand Canyon National Park is an amazing place it can also be a wild and hostile place. For many reasons, I will never forget this day.

Next up was Winslow, Arizona. Come back to see what we found in and around that area.

Posted by ktmissouri at 4:07 PM