We left Jimmie Dee SP on November 16. We were headed to Gulfport, Mississippi, but did not want to do the entire 300+ miles in one day, so I looked for a good place to stop. Almost directly in the middle was Natchez SP. We did not have reservations, but it looked like they had plenty of availability for the weekend. So, we did something we rarely do, we traveled to a new park on a Friday. As luck would have it they had a nice spot for us even though it was fairly full. It seems that it was hunting season and they were allowing people to hunt in the park. OK, no hiking here.

I was only slightly aware of Natchez. I had heard about a nice collection of Antebellum homes and that was about it. Well, did I have a lot to learn. Natchez was a thriving city in the early 1800's. Cotton farming in the near by delta was fueling a booming economy. The rich plantation owners built huge mansions. By the 1850's, Natchez was the home to over half of the millionaires in the US. The farms and mansions were fueled by slave labor. Natchez was surprisingly against the secession of the south, so when the northern armies captured and occupied Natchez, they left most of the beautiful homes intact. Natchez has over 1000 buildings on the National Register of Historic places.

We headed out of the park and before we made it a mile, I saw signs for the Natchez Trace. Natchez is the southern terminus of the Trace. This ancient roadway runs over 400 miles from Natchez to Nashville, Tennessee. I have driven part so this scenic parkway before, but this was the first time in years. This roadway was originally used by the Natchez and other Indian tribes from this area as a trade route north. Before we went too far on the road we came to a sign for Emerald Mound. 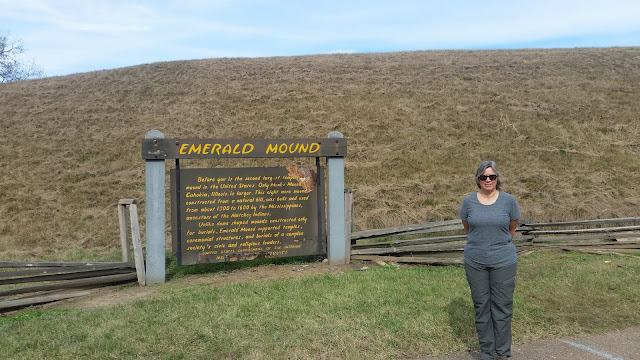 This was an ancient city dating back to the 1300's. I was blown away by the size of the area that had been cleared and mounded to be used by these ancient people for rituals and sport. They built a huge mound that is over 8 acres and about 100 feet high, by hand. 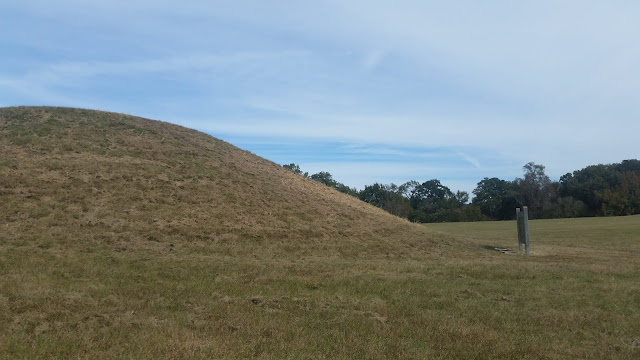 We did stop along the trace to take a walk on a section of the original road that was bypassed when they built the new beautiful winding parkway. After that history lesson, we drove down the trace to the end and then headed into the city of Natchez.  The National Park Service has a historical park on the grounds of Melrose. Melrose is one of the mansions dating back to the 1840's. We decided that would be a good place to start. 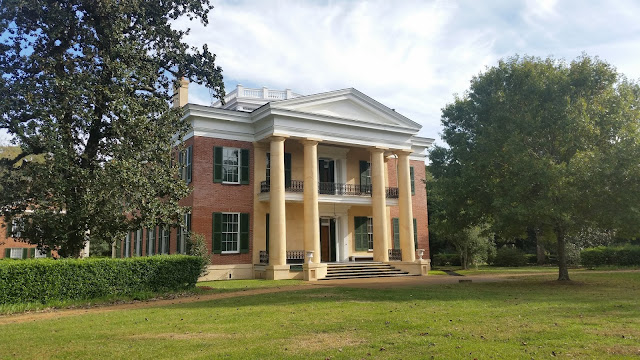 The history of Melrose is very interesting. I think that is what is cool about each of the houses. Each has it's own story to tell. This estate was built from insane money made in the cotton business. They held between 10 and 25 slaves to run the estate. I was very conflicted while touring the house and grounds. 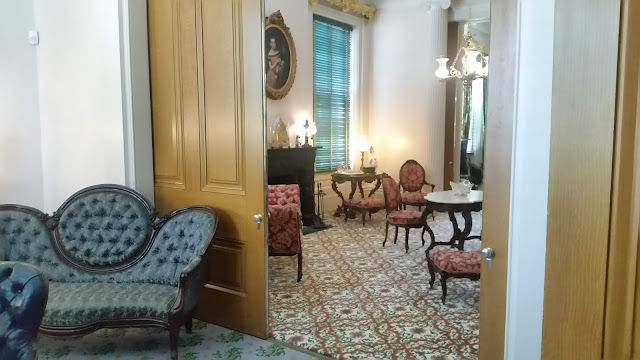 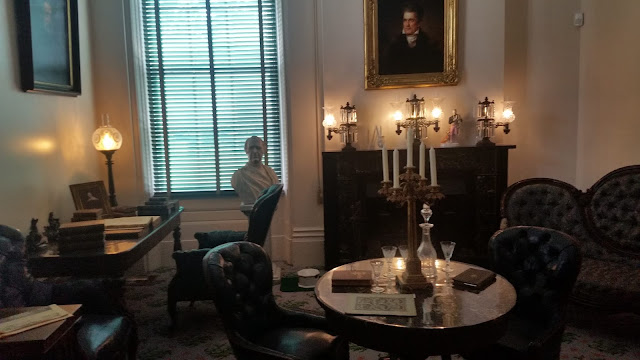 I liked the house, but loved the grounds. I walked around the barns and slave quarters and imagined what life would be like for all of those people. In the slave quarters there was an awesome exhibit that included interviews of former slaves done around the turn of the 20th century. A real lesson in American history.

We then decided to go to the old downtown area and do a walking tour.

The downtown streets are interesting, but do not date back as far and the cities like Charleston, SC that we visited last winter. 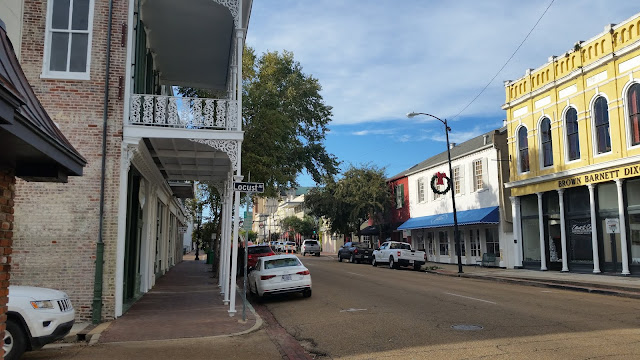 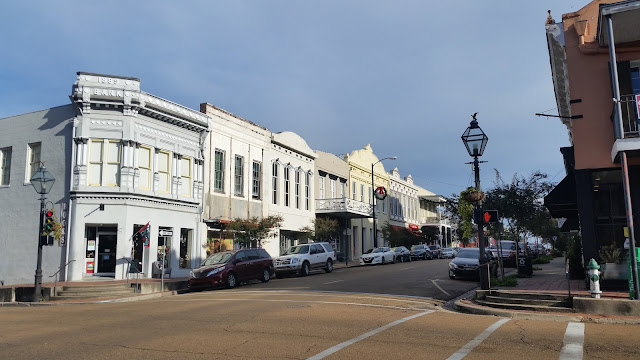 They have beautiful churches:

We walked to the banks of the Mississippi river. That is why this city is located here. They used the river the ship the cotton all over the world. 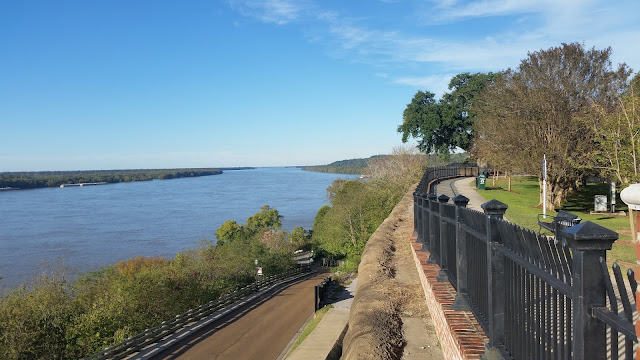 We walked down and back up a very steep hill to the waters edge. This is an area called "Under-the-Hill". This was the rough area on the docks where they loaded the barges and bought and sold slaves. It has now been turned into a restaurant and bar district. 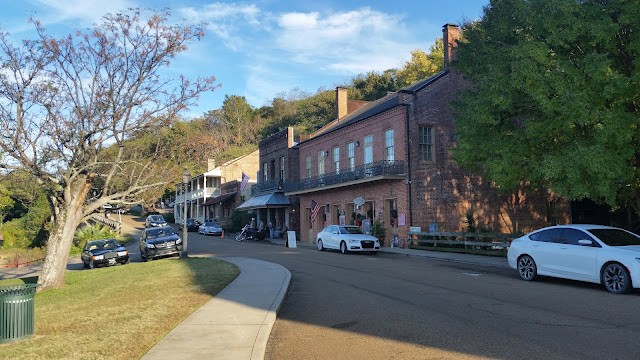 We walked by a number of other beautiful homes. 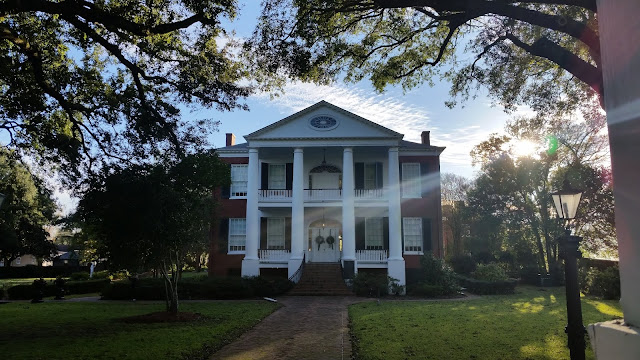 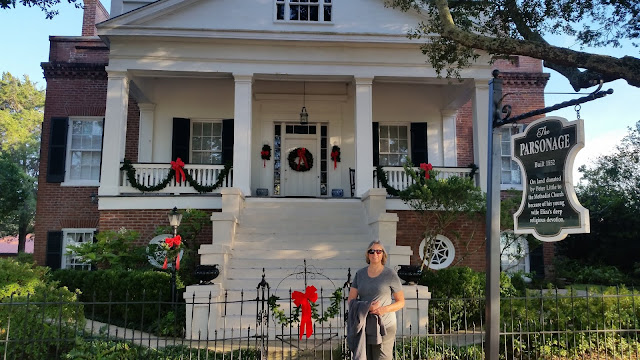 After the steep climb from the rivers edge, we both deserved a nice dinner. We stopped at a local bistro and enjoyed a good dinner. The food was only average, but we engaged in conversation with a couple of local gentlemen that were involved in tours of the mansions. That conversation made the dinner memorable.

We made it back to the park after dark and knew we had only scratched the surface of what there is to do and see in Natchez. It really is a "must do" if you are traveling in the area.

The next day, we were headed to Gulfport. I was more than excited! I will write all about the next chapter in our sailing adventure in my next entry.
Posted by ktmissouri at 9:22 AM