I am writing this from Russellville, Arkansas. Just as we started this trip by stopping here to see our son, DIL and two grandsons, this will be our last stop before we get back to the ranch in Missouri. We expect to make our final move early next week.

We left Foscue Creek Campground on February 14, Valentines Day. We drove about 120 miles mostly on I 20 to Roosevelt SP in Eastern Mississippi. This park is not far from I 20 and makes an easy stop as you are traveling along the major East/West corridor. The SP was originally built by the CCC back in the 1930's and surrounds a lake. It has many camping areas and a lodge. We had a nice site backed up to the lake. I fixed a nice shrimp pasta for Valentines Day dinner and Kim made another Key Lime Pie. The pie was delicious and the best part is I did not have to share it. 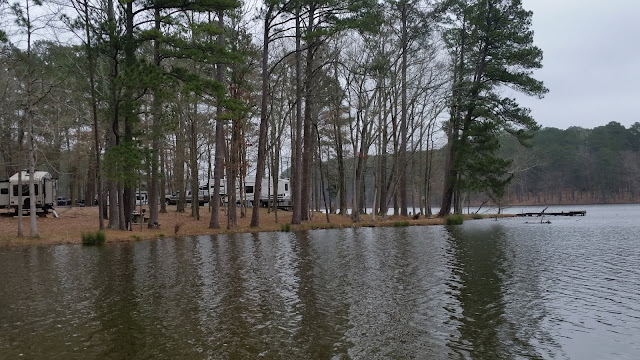 There is a nice trail and road system all the way around the lake. I walked it twice while we were there. It is just a bit over 3 miles around.


There is also a very tight disc golf course in the park. I played it once and enjoyed it. I did have the misfortune of losing my driver disc in the water. It sunk to the bottom. 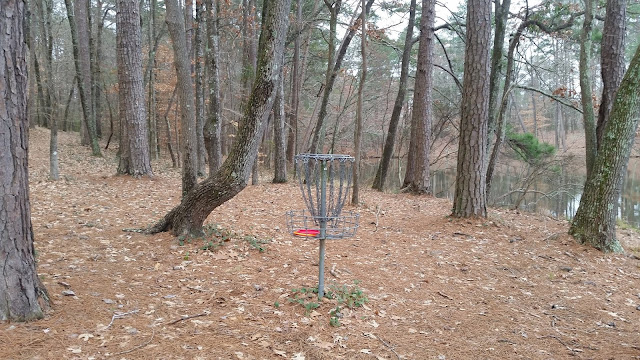 We noticed the early signs of spring while we were at Roosevelt SP. Kim loves to see the daffodils and forsythia when it blooms. We will hope to see this over and over as we follow Spring north. 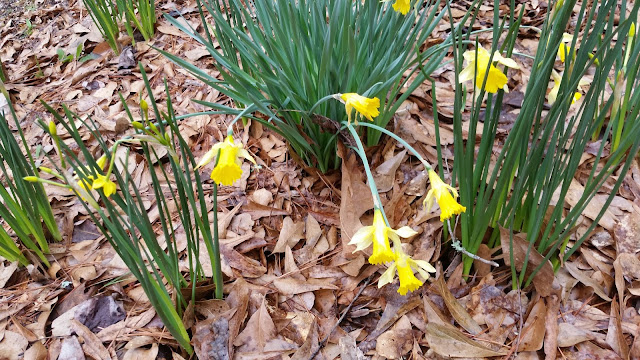 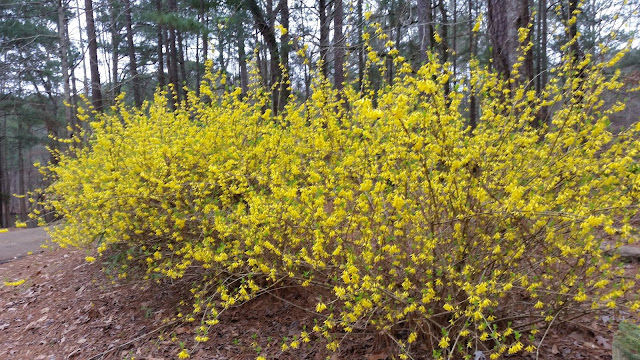 We stayed 4 nights at Roosevelt SP and had a nice quiet stay. I know this is not real exciting, but we are on our normal pace as we move around the country.

We left Roosevelt SP on February 18 and headed west into Louisiana. After crossing the Mississippi at Vicksburg we headed out into the flat delta land on the Louisiana side. After a few more miles on I-20 we turned north to get to Chemin-A-Haut SP in far north Louisiana. We love Louisiana SP's for many reasons. We have stayed at over 20 Louisiana SP's and never been disappointed. Chemin-A-Haut means "high road". This park is built along a high bluff overlooking a bayou. Normally you would be able to paddle along the bayou, but heavy rains had brought flooding. The forecast was for heavy rains for much of the time we were at the park.

As soon as we arrived, Kim got to work doing laundry. One of the things we love about Louisiana SP's is that many of them have free laundries. This one had brand new machines and we were able to  get caught up. That free laundry made the $25 per night rate very affordable.

The forecast for rain came true and we spent a couple of days hunkered down. When I did finally get to take some walks many of the roads in the park were closed due to flooding. 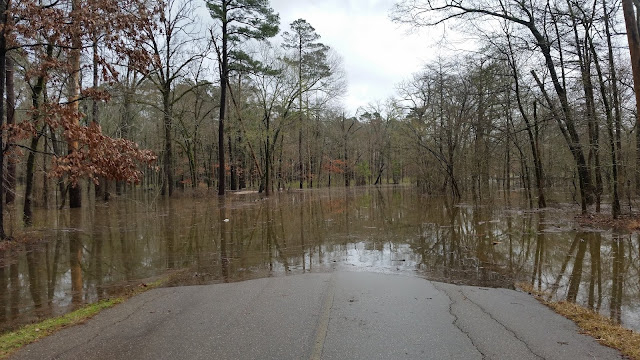 We loved how quiet Chemin-A-Haut SP was. We were a good distance to any road and the campground was empty much of the 7 nights we were there. The last night, we were the only camper in the park. We both did a bunch of reading and relaxing. It was a nice week.

From Louisiana it was a short drive north into Arkansas. I will write all about our last two stops on this trip in my next entry.
Posted by ktmissouri at 4:18 PM