In my last entry, I related the story of making an offer on what we hope will be our new home, an Island Packet 35 sailboat. In this entry, I will take the story from there to now. To say our lives have been busy would be an understatement.

After signing the sales agreement on the boat we had much to do in a short period of time. We signed the deal on June 4th. We had flights scheduled on Wednesday June 12th. Mike, our broker was going to be out town in Missouri until the 10th. We had to do a survey on the 11th.

A marine survey is an inspection, much like a home inspection before you buy a house. The survey is required by the insurance company and a lender if one is involved. You have to hire a professional to conduct the survey and you have to arrange with a boat yard to lift the boat out of the water, so that the surveyor can inspect the hull. This entire process costs the buyer about $1000.

I made a bunch of phone calls and was able to make all of the arrangements. I also started working on insurance and marinas. I had much to learn on both of these subjects. I also continued to research tax requirements and registration issues. I worked more than 8 hours a day for all of that next week. It was great to have the Miami condo to work from. Thanks again Doyle!

We left the condo on Monday, June 10 and drove the 4 hours to Bradenton, Florida. We stayed at a Days Inn. Talk about a step down in accommodations! The room was small and the area was a bit sketchy, but we made it work.

We were up early on the 11th to meet Mike at the boat and begin the process of getting comfortable. If I could not get comfortable, I could kill the deal during this step in the process. The Surveyor was right on time at 9:30 and we began getting the boat ready to have it hauled out of the water. We started looking at various systems on the boat. The Surveyor was excellent at explaining what he was doing as he went along. There were a number of things that he had only limited knowledge of, which was a disappointment, but that was mostly electronics, which is my strength. 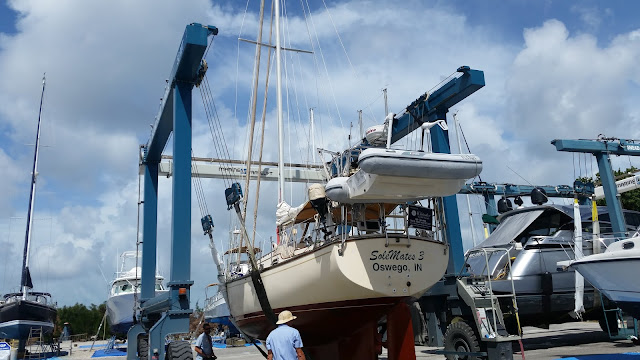 The Surveyor called the boat a "boring" boat. What he meant by that was that he was hard pressed to find anything wrong. After putting the boat back in the water, we took her for a test sail. We had a good 10 to 15 knots of breeze. We motored out of the harbor and the engine ran perfectly. We then turned her into the wind and I raised the mainsail. That was a bit more of a workout than I expected. This boat is much larger than what I am used to with my Hunter 22. We then unfurled the staysail and then the Genoa. We then beared away and she caught the wind in her sails and took off. We quickly accelerated to almost 7 knots. I took the helm and she felt stable and balanced. I loved the way she handled. I am sure it won't be long before I have complete confidence in her ability to take care of us in even the worst conditions.

I went forward and gave Kim the helm. She also liked the way the boat handled. I looked over the sails and found one repair on the main, but all else looked good. They are not new sails, but they should be fine for a while. It was then time to take down the sails. I had the distinct feeling that I just wanted to keep going, but we took them down and ran a full power motor test. The motor did not get hot and ran perfectly. We then headed back to the dock.

It was at this point that Kim found the only negative issue for the day. The main hatch was leaking. The strange thing is it was fresh water. It seems that there is a top side leak that is letting rain water in between the deck and the cabin top. The water had been there for a while and moved to the hatch when we healed over while sailing. The boat has not been sailed for a while. I think I found the issue right away and should be able to fix it. The good news is my Hunter has given me lots of practice fixing this type of issue.

We were comfortable when we were out on the water with the excellent breeze, but it was hot and humid when we got back to the marina. We plugged in the electric at the dock and fired up the A/C. It works very well.

We then spent the next 4 hours going over every compartment and every system on the boat. This is what I need to get comfortable. I found many cool things that had been added by previous owners and a couple of disappointments, but nothing that was a show stopper for either Kim or I.

We went back to the Days Inn, hot and tired. It was a very long day. We had a fairly short list of things that required additional information. We got up early on Wednesday, June 12th and drove to Orlando and then flew back to Missouri. Our daughter Shannon was there to pick us up and before long we were back in our current home at the ranch.

I have much to write about, other than the the story of buying the boat, but I will fast forward two weeks to yesterday. We spent those next two weeks gathering additional information about the boat and the installed systems. Our broker, Mike has been great. He is full of information and suggestions. He has made a couple of trips to the boat to take pictures and even a couple of videos to explain how things are installed.

We got the report back from the Surveyor. To tell the truth, I was disappointed. There were many errors and omissions in the report. There was no mention of the largest issue we found (the leak in the cabin top) It is clear they cut and pasted from other survey reports and were not very careful. There is not much that can be done about that, and they did help me get comfortable with the boat. The main purpose of this document is it must be sent to the insurance company.

To make a long story short, we signed a letter of acceptance yesterday. That means we are now committed to buying the boat. We still have a few things to finalize, but we are scheduled to close on July 10. We are planning to take possession and move aboard on that day. I am sure it will be a cool and comfortable day in Florida in July... Yeah, Right!

In my next entry, I will write about the other things that have happened in the past two weeks. It has been more of the same kind of pieces falling into place. Clearly we are doing the right thing...at least that is what we keep telling ourselves.
Posted by ktmissouri at 10:11 AM