So Close, But Yet So Far

We awoke Sunday, January 19, 2020 to 5 knots of wind in Jewfish Basin. It was a beautiful calm morning and our 40th wedding anniversary. We checked the weather and discussed our options.

The weather defines our plans in this lifestyle, but like many things in life,  the predictions are often wrong.  I look at 4 different weather services and look for agreement. For that Sunday,  they were all calling for light wind in the morning and then dropping off to no wind overnight and then light north wind on Monday building to stronger winds from the north Monday night.

We decided to take the chance and head to the place we have wanted to visit ever since we saw the pictures in Kim's National Park coffee table book that has defined so much of our lives for the past 6 years. Dry Tortugas National Park is a small island 70 miles west of Key West, out in the Atlantic ocean/Gulf of Mexico intersection. They built a fort there and called it Fort Jefferson. It is the largest masonry structure ever built in the Americas. The fort is an attraction that we look forward to exploring, but the islands are surrounded by beautiful beaches and reefs that are alive with all kinds of sea life. The water is that deep blue that is crystal clear.

We had a dream to visit this place, and that is how we got started on this crazy sailing adventure. Sure, you could get on a tour boat or a float plane, but that is not our style.  We wanted to take our home there and tour around on our own schedule.

It felt great to leave Jewfish Basin. Bad memories there, but we took some valuable lessons with us.  We were able to sail to the north channel entrance to the Key West Northwest channel. We had to turn back to the southeast and straight into the 10 knot breeze. I thought, wait a minute, that was not supposed to be there.

The plan was to pass by Key West and then turn west and stop at Marquesas Key and drop the hook for the night and then get up early and use those mild north winds to sail the last 40 miles on Monday.

The ride through the Key West channel was wild. We had the current with us, but that unexpected wind created a wind over opposing current situation called a "Rage". We went up and down some 6 foot plus waves, but SHIFT took it in stride. We were happy to clear the channel on the south end. We were now only 10 miles to our stop, but there was another surprise that the weather service forgot to tell us about.  We had a squall that was just sitting off shore south of Key West. It was producing the north wind and some pretty big swell. We used the wind and sailed along nicely.

As we approached our anchorage, we determined that there was no way we would stay there. It was unprotected from the unexpected swell.  We now had two choices,  we could turn around and go back to Key West and try to find a marina, or sail on through the night on our first overnight sail and arrive Monday morning about sunrise. It was about 3:30 PM at this point.

I looked at Kim, and it was clear what the plan was going to be. It actually made sense, we could easily sail those 40 miles even if the wind dropped out and beat the weather into Dry Tortugas.

We sailed along until sundown at about 4 knots. That was too fast, but we were expecting the wind to die, so we made as much progress as possible.  The wind did die about 8 PM and we turned on the motor and slowly cruised along in the dark.  It was very uncomfortable at first just steering on a compass heading, but we soon learned to use the beautiful stars as a reference. It was a great experience.  The only problem was my autopilot was not working properly,  so we had to hand steer the entire time.


We took turns at the helm and taking naps in the cockpit. What a way to spend our anniversary.

At about midnight,  the wind picked up from the north as expected,  but quickly it built to 15 knots.  That was much stronger than expected.  We put out a portion of our genoa and tried to keep the speed down.  It was clear that we would arrive before day break, but we would rather be moving than just sitting in the swell rocking back and forth.

We arrived at the island about 4 am. The wind was blowing 15+ knots and the swell was bigger than I expected.  I "hove to" the boat.  For you non sailors,  that allows you to stop the boat and slowly drift downwind. We waited for about an hour and then gained that ground back and hove to again for another half hour. It was then becoming light and we headed for the channel. The swell was just as big in this channel as it was the previous day in Key West. We made it in and got the anchor down. I knew the wind was coming,  so we put out 200 feet of chain. The anchor bit hard and we are 100 yards from the Fort. 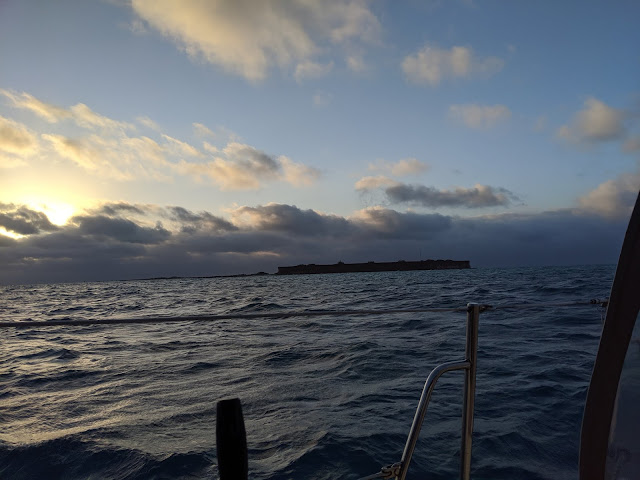 We were just getting settled in when we heard 2 float planes approaching. Before we knew it,  one landed on one side of us and the other landed between us and the only other boat in the anchorage. I  was sure we were in the wrong place. I called the office on the VHF radio. They assured me that we were fine and the planes will land and take off where they have room. It is very cool to watch.

It was then that I went to bed, I was exhausted! I woke up at about 1 to much stronger wind than expected. There were large waves around the boat and we were rocking pretty good. I decided that we would not get the dingy down and install the outboard and go to shore.

Well it is now Tuesday night, as I write this and we still have not been to shore. The wind has been a constant 20+ knots and it is not safe to get off the boat. So far, our anchor is holding well. We are having trouble getting weather forecasts on the radio,  but the last one we had was for better weather tomorrow.  We will see...

Update: I wrote all of this post from the boat during the wait. When we awoke on Wednesday morning, the weather was much better. We went to work getting the dinghy ready. We were able to finally make it to shore. We paid the entrance fee and toured the fort. It is huge! The crazy thing is it was never finished or really used for the original purpose. It was used as a prison for a time, but was abandoned after a yellow fever outbreak in 1874.

After touring the fort we took a walk on the beach. There were some amazing shells, but you can't take them from the National Park. 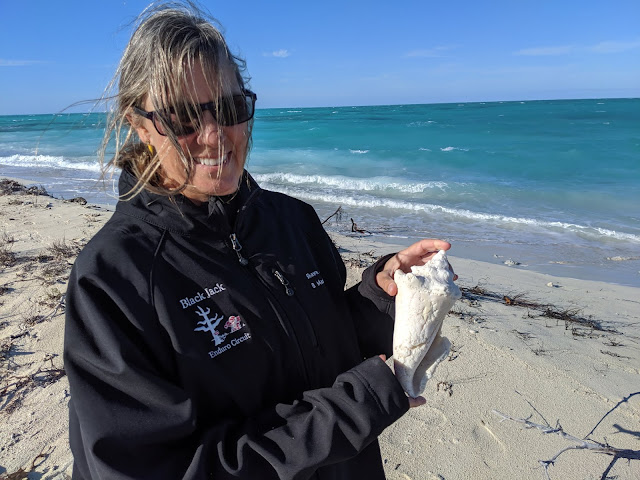 There was an island at the end of the beach above that is protected. It is a nesting ground for Frigate Birds. They are a very cool looking bird.

When we returned to the dinghy, it was getting washed away in the surf. I had to get my legs and feet wet to save it. I then went over to the Tour boat captain and asked him about the weather. He was great and got the latest forecast for us. The bad news is that we had more bad weather coming in three days. If we wanted to sail north to the mainland of Florida, we would have to leave the next day. That sail has been on my to-do list for a while. We got back to the boat and started to prepare to depart. In my next entry I will write about our open ocean sail from the Dry Tortugas to Fort Myers Beach. It was epic!

Posted by ktmissouri at 7:04 PM