Our Longest Passage Yet

From the time we have been planning to visit the Dry Totugas, I have been thinking about the trip from there back to the mainland of Florida. We certainly could travel East back to Key West, a trip of about 70 miles and one that could be done in a single day, but that looked like backtracking to me. If you have been following this blog for a while you probably know that I hate to backtrack. I also wanted to complete the loop. It seemed like the logical plan was to sail northeast about 130 miles to Fort Myers Beach. The plan was for this to be our first overnight sail, but as it turned out, that was accomplished quite by accident on our trip from Key West to the Dry Tortugas a few days earlier.

I had been desperately trying to get a weather forecast the entire time we were anchored at Fort Jefferson. The VHF weather forecast from Key West was very broken and scratchy. I was spending about an hour each day trying to piece together something that would be helpful. When we finally went to shore on Wednesday the 22nd, I spoke with the captain of the Tour boat and asked him if he could do better. He was happy to help. What he gave me was that there was good weather with a Northeast wind on Thursday that would clock around to an Eastern wind later in the day and into Friday. It was expected to be 15 knots in the morning  and dropping down to 5 to 10 that evening and into Friday. There was a stronger Northern that would come in on Saturday. That was the window we were looking for. We would have rather stayed at the Dry Tortugas for another day, but this was too good to pass up. I broke the news to Kim and she said that she was ready to go. We got to work getting everything ready. The winds were lighter than they had been and we got a good nights sleep.

We were in no hurry to leave in the morning. Every hour that we waited allowed the seas to calm down a bit. We pulled the anchor at about 8:30 and were heading for the channel before 9 am on January 23rd.


As I had mentioned in an earlier post we have been having issues with our autopilot. It would seem to hold a course for a bit and then it would go crazy and turn us in some other direction. It could not be trusted. While we were waiting things out at the Fort, I did some reading and found the compass that is installed in a locker in the boat. The documentation warned not to have significant metal or any magnets near this compass. I had my main tool box, right next to it. Inside the box is a very powerful magnet. I rearranged the boat and moved the tools into another locker. The great news is that our autopilot was now working correctly. As the day wore on, I gained more and more confidence in it. I can now say it has worked perfectly since I made the change. That would make a huge difference in the next day and a half.

When you sail off shore, you set a line on the chart that is the direct line between where you are and where you want to end up. That is called your "rhumb line". That line took us on a heading of 45 degrees or NE. My plan was to sail as hard on the wind as I could and try to head straight north. We would hold that course until the wind clocked to the East and we could then turn back and make up the ground. If we could have stayed on our line and maintained 5 knots we would have a 130 mile trip in 26 hours. Every hour we deviated off of that course we added time and distance to the trip.

We sailed along with good wind albeit from the wrong direction at about 6 knots on a heading of about 350 degrees. We used the motor some to clear Pulasky Shoal Light, which is the most northern shoal around the Dry Tortugas. We saw a few crab pots, but not nearly as many as we had seen in the keys. They were gone completely when we hit water over 100 feet deep. The deepest water we saw was 165 feet. The seas were 4 to 6 feet, but we both felt fine and never got seasick.

I was getting a bit frustrated with the wind. It was still coming from the NE and we were getting farther and farther off course. At one point we were about 25 miles off of the rhumb line. Then the wind just died off to about 5 knots. We had to run the motor and that took us on a better course. We made up a little ground during the night. We took turns sleeping for an hour or two. It was all I needed and we both felt great the entire trip.

Kim took a couple more pictures, but I was more focused on video. Look out for some cool video that I shot during this trip. We saw hundreds of dolphins. I will edit down the video and post it at some point in the near future. 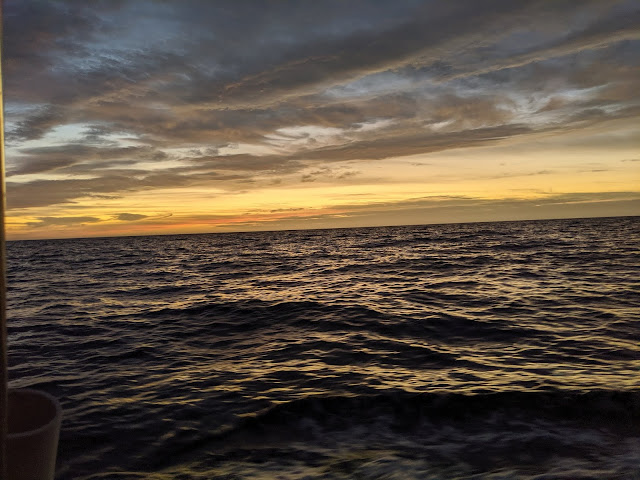 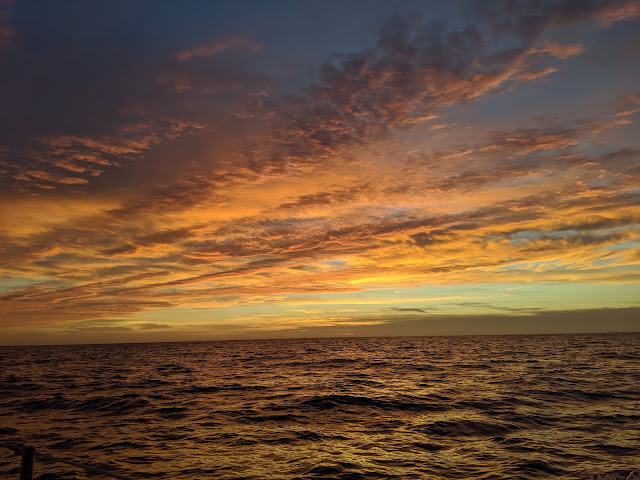 Around 5 in the morning, the wind picked up to about 12 knots and finally clocked around to the East. I got all of our sails up and we were on the move and we were heading in the right direction. We made up all of our lost ground and by noon we were right on course. It was a great 7 hours! Then the wind just completely died, so we had to motor the last 3 hours to arrive at Fort Myers Beach.

I had called ahead and was given a mooring ball assignment. When we arrived, the harbor was crazy busy. We found our ball, but another boat was attached. I called the office and they told me that that happens all the time and there was not another place for a boat our size. I was tired and frustrated. I headed back out the channel and Kim started looking for close by anchorages. We found one about 5 miles away. We got there and had it all to ourselves. It was quite a relief after the congestion at Fort Myers Beach. We were looking forward to long hot showers and some land time. We had been on the boat for all but 4 hours of the previous 10 days. The good news is that we had plenty of water in the boat, so we took hot showers and settled in for the night. The wind stayed light and we slept very well.

I felt very good about our trip. We ended up traveling 155 miles in 37 hours. It went very well and we both had a strong feeling of accomplishment. It is amazing how far we have come in the past two years.

We stayed near Sanibel for 2 nights and started doing research to determine where we would go next. We had no plan, what would we do? In my next entry, I will answer that question. I will tell you now, the answer was a surprise to us.
Posted by ktmissouri at 4:39 PM