It once again has been over a month since I have written in this blog. I think it is about time for an update and some discussion of our future plans.

We left the boat in Gulfport on April 8th, which is our son Mark's Birthday, and headed north in the truck. We first made a stop in Arkansas to see our son, Michael and his wife Audrey and their two boys, Connor and Cameron. We went for a fun hike at a place called Long Pool, which has an awesome waterfall. 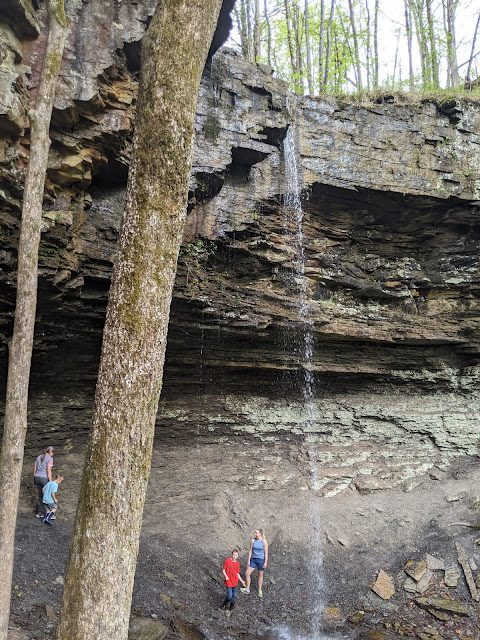 Then we headed north to the ranch in Missouri.

We had a difficult time getting all of the systems in the trailer working after it sat for over 6 months through the winter. The biggest problem was the hot water heater. I was able to get the trailer livable, which was our home base for the next month and a half. We quickly made our way to Ozark to see the other 6 grandchildren. We went to soccer games and hung out at the house and caught up. Shannon decided that we all needed to go ice skating one afternoon. So off we went to Jordan Valley Ice park. Kim didn't skate, but I gave it a go after not skating in close to 20 years.

We arrived at the ranch at a beautiful time of the year. The dogwoods and red buds were in full bloom. Kim loves to take a ride out to see the beauty this time of the year in the Ozarks.

We had the crazy snow storm on April 20 that I mentioned in my last entry. We ended up getting about 3 inches of snow, but it was all gone in about 12 hours.

One of my favorite young men is one of our local National Level Professional Riders, Noah Clark. It has been awesome to watch him grow up. He was at the ranch a lot while we were there to teach riding schools. I have known him since he was 7 years old. It was awesome catching up with him.

I even got my bike out of the cobwebs and did some riding. I still love the feeling of going fast on the trails through the woods.

The main focus of our time at the ranch was one of our races that we promote and organize. I love to spend time in the woods putting markers up on trees and marking off the course. The event went well this year with over 240 riders attending. We had no major injuries and the race went off without a hitch. Just the way we like it.

We went to Will's Choir competition and Band concert (The boy does it all), Isabella's band concert and then Amelia's Ballet recital. It was a full schedule, but we loved it all.

We left the ranch on May 18th. We spent the next few days at each of our children's houses. The first night was at Mark's new house. We had dinner with Mark and Callie, his soon to be wife, and then were the first houseguests in the guest room. The next day we spent at Shannon and Brian's house and then went to our oldest Grand Daughter, Hannah's College Graduation. She just completed a 3 year program in Occupational Therapy.  Then back to Michael's in Arkansas for a quick visit. It was a crazy busy trip, but we really love and need our family time. We ended up sleeping in 5 different beds in 6 days.

Now we are back at the boat and we have had some time to relax, but I have been focused on getting our engine diagnosed and hopefully working perfectly. We had a mechanic come to the boat and told us the engine is solid, the smoke looks like a fuel injector problem, but he wanted me to go through the cooling system also. I have spent the last few days doing that. I pulled apart the heat exchanger, the raw water pump and replaced all gaskets and seals. That part should be good to go. I decided to order new injectors. The mechanic will be here tomorrow to install them.

You may ask, why are we so focused on getting this engine perfect? Well, we have big plans for the next 2 years. We are going to be heading back up the river to Demopolis for hurricane season. It was bad down here last year and we want no part of that. We will leave Demopolis when the season is over and head for Florida. We would like to get the boat in South Florida by mid December. We will leave the boat and fly back to Missouri and then drive to Colorado for a family gathering with all of our kids and grandkids in the mountains. We are hoping to get everyone on the slopes, including us. We will then go back to the boat and hang out in the Keys until the Christmas winds die down in February to March. Then we will head to the Bahamas. We may sail with at least one other boat, but we will see how all of our plans sync up. Then in June or so, we will head north along the eastern US. We are hoping to make it to Maine for the hottest part of the summer. Then start heading south again. It has always been our dream to make this trip and the reason we started this crazy sailing adventure in the first place. We think we are ready, we are hoping the boat is ready. Pray for us, we will probably need it.

That is about it for now. I will leave you with a nice sunset from our time in Missouri. 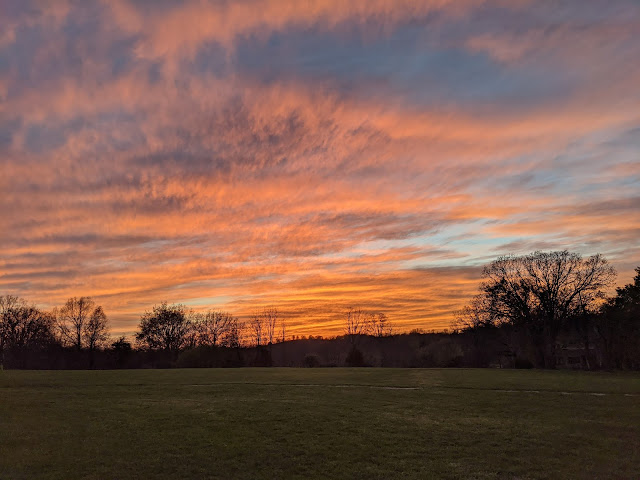 Posted by ktmissouri at 2:44 PM