The Process Has begun

It has been a busy time for us since we returned to Gulfport after our long trip. We were hoping to get started with the engine swap right away, but the installing company put us off a week. That actually was a good thing, because we really needed some down time to rest and get ready for the time in the yard. We have been keeping a close eye on the tropics and all is quiet for now. The main issue with the timing is that hurricane season looms, and the most active months will be here soon. We really want to have the boat up the river to give us the best protection possible.

The delay also let us have time to say good bye to all of our new friends in Gulfport. We really had an awesome time there. One of the cool things about this marina is that it is a stopover point for many boats that are either moving east from Texas or boats headed back to Texas from Florida. We have had the pleasure of meeting many that were on one of those journeys. The other day a boat came in and took a slip just of our stern that looked very interesting.

I walked over to them and said, "When I saw this boat I figured there had to be a good story". They both laughed and we begun an hour long conversation about their adventures. They had just sailed this steel boat from St. Pete directly across the Gulf of Mexico to Gulfport in 4 days. This is a French built boat that at one time was a race boat. It looked a little rough, but they assured me it was very seaworthy. They are from New Orleans and are heading home after spending some time along the Florida coasts. They, like all sailors, were very cool people and I really enjoyed the conversation.

I had one issue that I needed to try to solve. I will be left with this Yanmar Diesel engine. I decided to list it on Facebook Marketplace and see if I could sell it. I had a buyer just a few hours after I listed it. He said he would be out to see it the next morning. I marked it as "Sold" and waited for him to come by. He never did, and after trying to reach him over the next three days, I gave up and listed it again. The good news is that the second time went better. The buyer was local and he came by and we made a deal. He lives 6 miles from the yard and will come by and pick it up when we get it out of the boat. Sweet! one less thing to worry about.

The call came that we needed to be at the boat yard on Tuesday, July 27th to have the boat hauled out to replace the engine. We decided that pulling the boat out of the water was the best plan because we are probably going to have to pull the prop shaft to shorted it about an inch and a half. We will see if that was the right decision.

The first problem is that we needed to move our truck to our new location, which is the coastal town of Gautier, Mississippi. The work is being done in a small yard on the Pascagoula River a little inland from the Mississippi Sound. This meant we needed to move both the truck and boat about 40 miles. I asked a dock neighbor if he could help and he said "Sure". Thanks Duane! So we both drove over to the yard and he brought me back. We did enjoy a nice dinner together.

The only problem was when we talked to the yard manager they were not sure if they could haul us this week. A lack of available help and a full yard were the problems. He finally said, "bring it on, we will figure it out." Alrighty, then...

Kim and I were up at 4:30am the next morning and underway before sunrise. It was a beautiful calm morning and we headed out of the marina and out into the sound. A very different scene than when we arrived back in November, but we arrived in the dark and are now leaving in the dark.

While we were cruising along enjoying the sunrise, I recorded this update: Sunset Over Mississippi Sound
Click the link to watch the video.
We had no wind at all, so we could not sail. The old Yanmar just purred along. It was putting out a little smoke, but I have to say that old engine never let me down. I ran at 2100 RPM, which gave us 5 knots.
We made the channel at Pascagoula at around noon after a very nice cruise along the coast. As we approached we saw the large ships of the Ingalls Shipbuilding Complex. This is where they build a number of US Navy Ships. They have a number that are under construction.
We cruised right by Ingalls and up the river. We had to open a rail bridge to get in, but had to wait about 15 minutes for a train to pass.
When we arrived at the yard, they were waiting for us and in no time had us in the slings and then up in the yard. It was a long day, but we were very happy to get this part of the project completed. The one bad thing about this yard is that we are not allowed to live on the boat.
We found an "interesting" place to stay. It is not nice, by any standards, but at about $250 per week it will work. The interesting part is they provide nothing. I mean no toilet paper, no sheets, just a bed, TV, Table and chairs, refrigerator, two burner stove and couch. It is like renting a furnished apartment. We do get regular visits from the little critters that call this place home, but we are on the gulf coast and roaches are just part of life. We learned that when we lived in Houston just after we got married over 41 years ago. To say we are motivated to get back to our floating home would be an understatement. 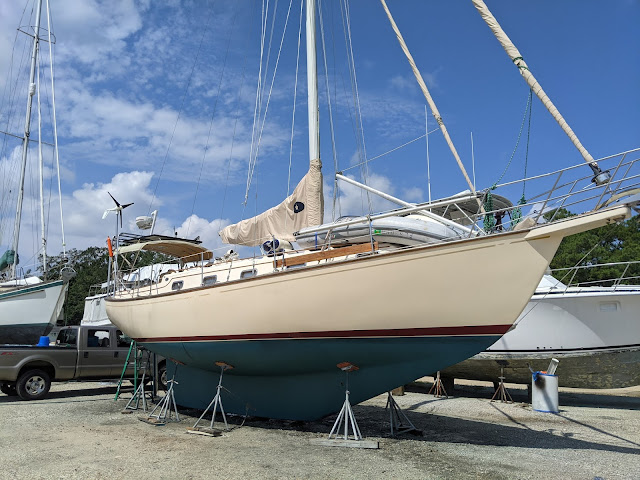 The work has begun unhooking everything on the old Yanmar engine. Some of that work was done by the company I hired to do it and some by me. That looks like the way this thing is going to go. I will explain how things are going in my next entry.

Posted by ktmissouri at 1:33 PM