In my last entry, we were running from Tropical Storm Fred. We had made it 63 river miles up the Tombigbee river to an anchorage called 3 Rivers. We had a very calm night other than we could see occasional the spotlights of the alligator hunters looking for their target.

We arose before first light and got ready to go. I was gaining confidence in the new engine with each passing day. After we had been on the river for a couple of hours I recorded this video update:

We were able to get an internet connection fairly quickly and were very excited to see that TS Fred was moving more east than previously expected. This was very good for us. We were now solidly on the "dry" side of the storm. We wanted to make it to the Coffeeville lock to have that protection from rising waters, which was looking like would happen around 2:30 pm.

Just before we arrived at the lock I noticed we had a target on our AIS system. It was the trawler "Satisfied Frog", that we had seen the previous day. They were running close to 8 knots, so they had caught up to us. We talked on the radio and agreed to go through the lock together. When we arrived at the lock, the lockmaster informed us there would be a wait as two of the big "tows" were passing through. We both idled around for over an hour until it was our turn to enter the lock.

I am not sure what was different, but this ride up was very turbulent. We struggled for a few minutes after they started letting water into the chamber to keep the boat straight and not slam into the wall. After a while, things calmed down and we waited for the signal to leave the lock and head upriver.

We had a short 2 mile trip from the lock to Bobby's Fish Camp. They have done some improvement on the dock since we were last there. Satisfied Frog and one other boat were there, but there was still room for us to get docked. It was great that the other boaters helped us get docked and tied up. Joshua on Leaping Lizard was a great guy and I enjoyed meeting him later that evening. We also enjoyed meeting and talking with Berrlin and Debra on Satisfied From. They are from Parker, Colorado and have been cruising for 5 years on the Frog including one complete "Great Loop".

Both of the other boats were planning to depart the following morning. Frog was hoping to make it all the way to Demopolis, which was about 100 river miles including passing through the Demopolis Lock. We hung out and fixed a nice breakfast and studied the weather. It became clear that the storm was going to pass east of us and we were in the clear. At about 9 am, we decided to go ahead and head further north and break up the trip to Demopolis into 2 days. We filled two jerry cans with fuel and promptly left them on the dock. We had only gone about a half mile when Kim asked me where the fuel cans were. I felt pretty dumb, when we returned to get them.

I recorded this video update around mile 130:  Update from Mile 130

It was a beautiful day as we cruised up the river. We never saw any part of Fred while we cruised along the river. When we reached our intended anchorage at mile 177, it was calm and beautiful. I recorded this video update after we got two anchors down and settled in for the night:

Video Update Mile 177 - Our last night on the river

Just after that update we heard a rushing in the trees that surrounded us. It was Fred paying a little visit. It was actually a far outer band of the tropical storm that was bringing us some wind. Unfortunately, with the stern anchor out, we were being held with our beam to the wind.  We waited out in the cockpit for a while and then the wind died off. I made an adjustment to the anchors to allow a bit more swing to allow SHIFT to get nose into the wind if it came back. We set the anchor alarm and went to bed. We did not have a Tow pass us all night and it stayed perfectly calm. That is all we saw from Fred. 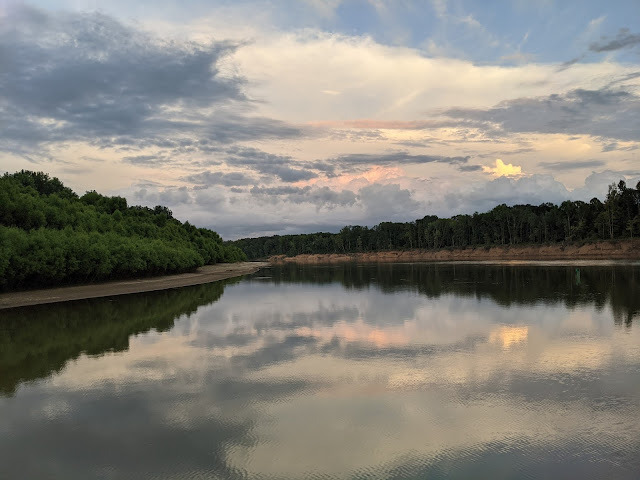 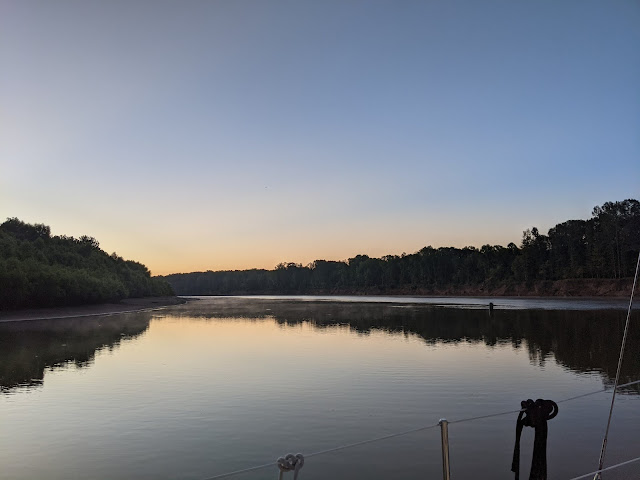 We arose the next morning and got moving. We did see a bit more current as the river got more narrow as we approached the Demopolis lock. The river banks turn to white limestone for long stretches in this area. with the additional current we saw our speed over ground drop to around 5 knots, but still just fine.

We made a very easy and uneventful trip up to the Demopolis lock and on to Kingfisher Bay Marina at mile 218. It felt great to be tucked into our slip and safe from the storms along the gulf coast. Or is that true? We will find out in coming entries as a new storm is on the horizon, and this is no Tropical Storm. A real major hurricane is on the way.

Posted by ktmissouri at 8:40 AM