A Different Type of Camping

This is the second update to try to keep my blog active while we are in Missouri at the ranch. We have been staying very busy. We try to take on a project each day. On October 7, I got up and got to work replacing the landing gear leg in the trailer. It went pretty easy and I was done by noon. We then decided to wash all 4 of our vehicles. First the boat and then the second time for the Mustang. The Mustang is a 40th anniversary edition convertible that I bought for Kim when she became a Grandma. Nothing says sexy like a grandma in a convertible. We left it in our storage unit here at the ranch and it developed some mold. I guess 10 months is too long to let it sit. It cleaned up nice and she is running well. Next up was the truck and then the trailer. Kim did an awesome job and they all looked so good I had to take a few pictures. 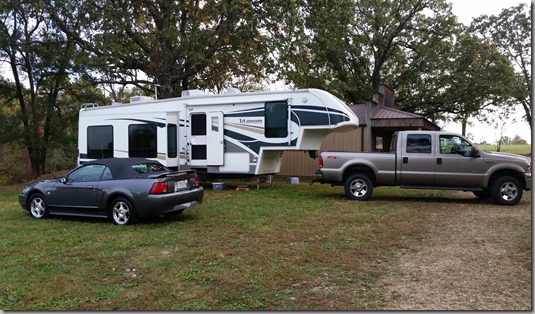 I just wish I had not put the boat away when I took these pictures. We worked on a number of other projects that week. On Friday, My son’s wife Audrey brought our two grandsons up to the area from their home in Arkansas. We met at Shannon’s house and I got some quality time with the boys. Cameron is now 18 months and he is growing up so fast. Connor is 5 and he loves to play sports.

On October 11, the ranch hosted a round of the Missouri Hare Scramble Championship Series. I helped out with a few things while Kim went to spend time with Shannon. Brian needed to go out of town for a couple of days and we are still waiting for that baby to come. They also had a baby shower for Shannon on Sunday.

I kind of acted as a course marshall during the race. I did take a few pictures. Here is the start of the Pro Class. The leader is a young man that I know very well. He is an awesome kid and has a bright future in whatever he wants to do. He is only 18. He led the 2 hour race until the last lap. He crashed hard and lost the lead. He still finished second. It would have been his first win, so we were all disappointed. 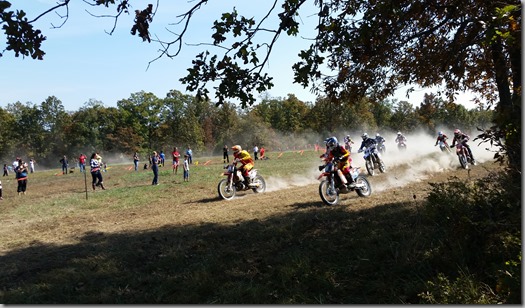 It was pretty dry and dusty, but as the field spread out it was not too bad. I have been involved in off road racing for about 35 years. I think I am done racing, but I still love the sport. Most of the 10 mile course is in the woods. Here is a shot at a spot in the woods. 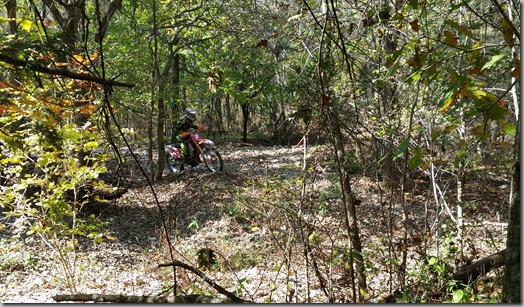 Not good pictures, but I think you get the idea.

When we put on a race, our main field turns into a small city. We had about 90 racers on this day and quite a few had come in and camped the night before. 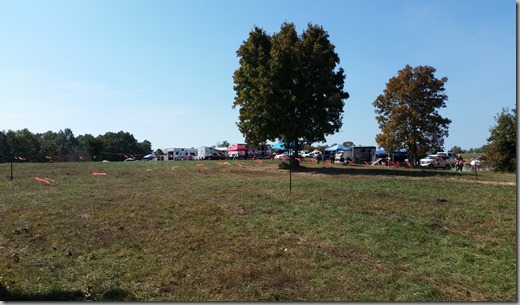 The next race at the ranch will be a big one the weekend after Thanksgiving. I will do a write up about that one. It is really special.

After the race was over the place clears out and we are here all by ourselves during the week. We did have a local pro come out and practice for a couple of days, but that was it.

On October 16, I left the ranch to go on a camping trip with 5 of my grand kids and my son in law. This is a Cub Scout family camping trip. We set up tents (yep, I slept on the ground) and they had activities and a pack meeting. They passed out awards including the Bobcat badge for our grandson William. We got a great shot of him with his cerimonial paint on his face. 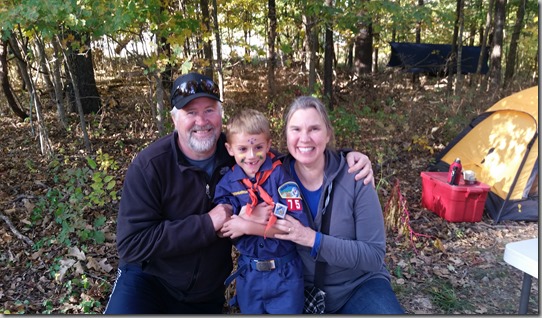 That is my tent in the background and one of the hammocks. All of the grandkids have hammocks and love to sleep in them.

I was invited to this campout because Shannon can’t sleep out in her advanced state of being with child. Brian is now a leader and needed to go. I stayed with him and helped with the kids and Kim stayed with Shannon in case a quick trip to the hospital was needed. Shannon and Kim did come out during the days and it is amazing how much stuff Shannon was doing. Still no baby…

When we got back to the ranch we saw a beautiful bald eagle eating something in the bar ditch by the front gate. I got one bad picture, but this is the evidence. 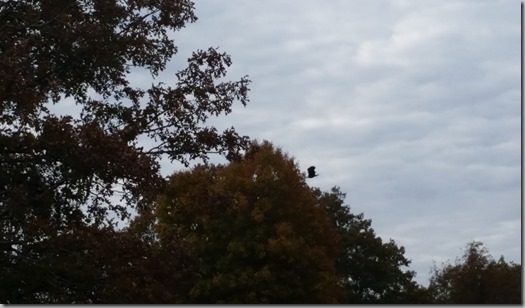 Today, October 19, I decided to take on the project of cutting down a large tree right by our trailer. It was leaning badly and we were all afraid it would fall on someone. All that is left is a large stump. I missed my target drop point by about an inch and a half. Kim helped a bunch with dragging brush, while I ran the saw. It took about 6 hours and we both got a great workout. 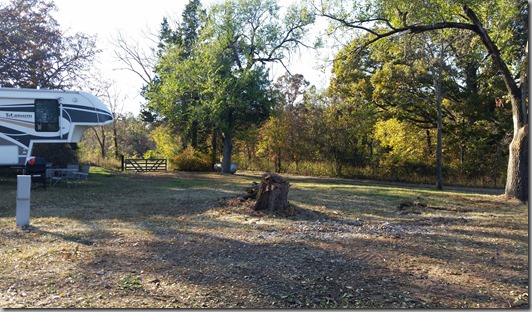 Shannon’s due date is tomorrow. So, hopefully I will be reporting on the birth soon.

I did go for a ride last Friday after we got a bit of rain. It felt good to get back on the bike. I am going to get the Go Pro set up on one of my Motorcycle helmets. I should be able to get some good footage. That is it for this entry. Hopefully the hitch itch won’t get too much worse.

Posted by ktmissouri at 7:40 PM