We are still at the ranch in Missouri. We have been busy with family gatherings and enjoying the fall in the Ozarks.
In 2014, the ranch hosted the 7th annual Ozark 100 Miler extreme motorcycle race. The original 4 were held here and then they moved to another venue. Last year went very well, so the 8th annual was back here at Hardwood Hills Ranch. The race has started to get national attention. We have had a number of national riders come out for the large cash purse and the top industry photographer/reporter from Dirt Rider Magazine, Shan Moore provided some national press. 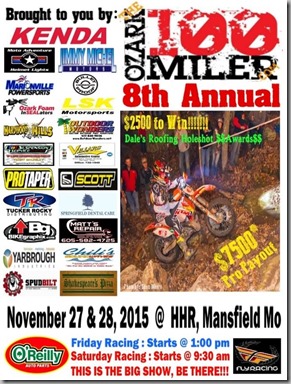 This year we had a number of top National Riders commit to riding the event and Shan was returning. The purse was also increased to $7500, which is a lot for an off road race. The format of the race is a 50 mile race starting at 9:30 AM, then a 25 mile race in the afternoon. Then after dark, the top 25 riders put lights on their bikes and go take on the toughest the ranch has to offer. Two of the toughest spots are lit up to provide the spectators an awesome view of the action.
Everything was looking good until mother nature decided to intervene and place her stamp on this years event. You have to understand that the riders that choose to ride this event are some of the toughest people I know and they love to get tested. The weather forecast was calling for rain both Friday and Saturday. Not just a little rain, but upwards of 4 inches of the wet stuff. Thankfully no snow, but the temps were expected to be in the 30’s.
The weather was going to take this years event from a very tough event into a true epic test of man and machine.
The event organizers had worked very hard for many months to put this event together. All the preparations were made and contingencies were discussed. The biggest concern is a large creek in the middle of the property. If the creek got too high, we would have to cut the event short.
I was working the gate on Friday evening and was amazed to see the rigs keep on coming in. The only problem is the parking area was looking a little wet. 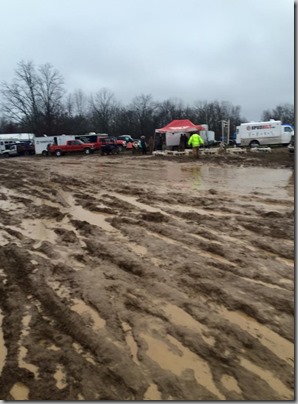 We parked people everywhere we could find a dry place and everyone got ready for the big race on Saturday.
We checked the creek on Saturday morning and it was decided that we could cross safely. The full race was on!
We had 130+ souls that started the event. They all started in dry clean gear. That lasted about 30 seconds. Here is a shot of the starting grid: Photo by: Tayler Bonecutter
Then they were off! This is literally 50 yards from the start. Look at the mud on the riders already. 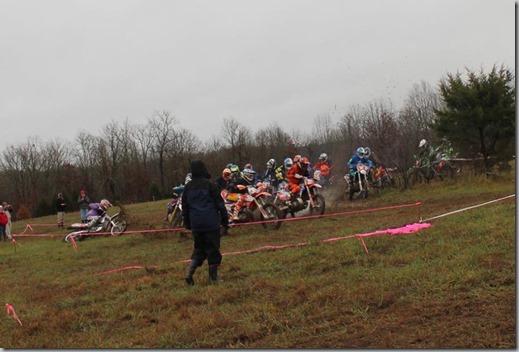 Photo by: Tayler Bonecutter
The person in the foreground of this shot is my wife Kim. The rider on the far left is local Pro, Zach Neil. Zach went on to finish 4th on the day. 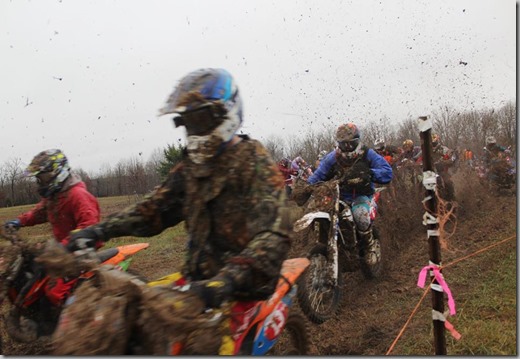 Photo by: Tayler Bonecutter
After about a mile and a half the riders hit the creek for the first time. It was deep, but passable. All of the riders made it without falling down in the cold water. National Pro, Jason Thomas was leading at the creek. He is from England, but races in the US full time. 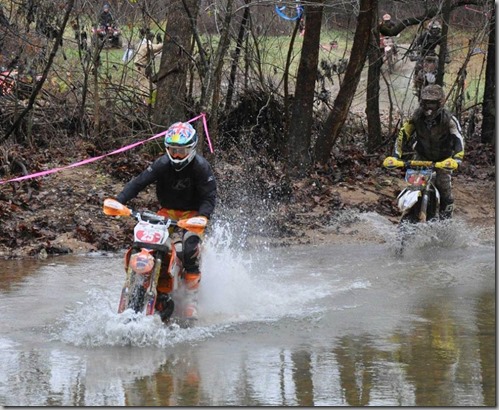 Photo by: Linda Fuerst
Some guys took it easy through the creek, others went for a pass. This in 2015 OMA Champ Steward Baylor, closely followed by other pros. He had fallen down in the grass tracks, but went on to win the first 50 mile race by almost 5 minutes. 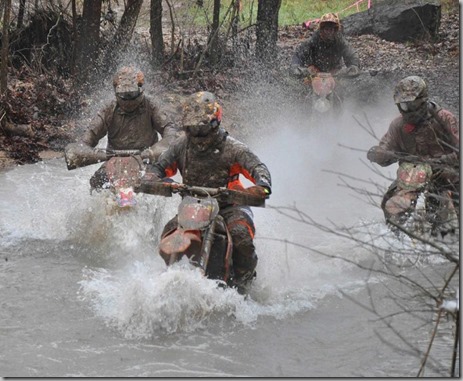 Photo by: Linda Fuerst
I will take a minute here and talk about Steward Baylor. Stew is a great guy. He came to HHR a week before the event to put on a riding school and do some hunting. Bad weather killed the attendance at the school, but instead of cancelling it, he did an almost private 2 days class with 2 of our best up and coming riders. They were both really excited to get the one on one attention and they both did well at this event. The most amazing thing happened on Thanksgiving. He fixed a full Thanksgiving dinner for a large group. It was all awesome. On top of being an incredible rider and I really cool guy, he is an excellent cook. Who knew??
The bad news is that Stew had a bike issue mid way through the second race and did not finish. I would say my biggest disappointment of the weekend was not being able to see Stew take on the obstacles at night. He promised to be back next year.
Here is a shot of Mickey Silger doing his best submarine impression: 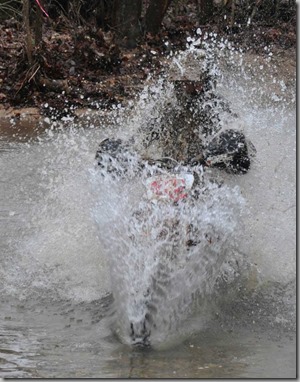 Photo by: Linda Fuerst
The riders then rode about 20 miles on the other side of the creek. The trails are tight and rocky and today were wet. Then they had to cross the creek again. This looked like an easier crossing, but it was tricky with one deep spot. A few bikes went down and had to be pulled out of the frigid water. Here is a shot of one of my favorite local pros. Ryan Henslee is an awesome young man on top of being an excellent rider. Ryan finished 5th overall. 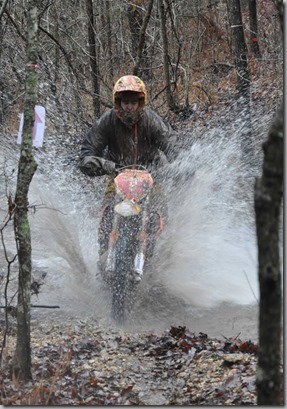 Photo by: Linda Fuerst
Here is a shot of National Pro, Nick Fahringer. He would go on to finish 2nd on the day. 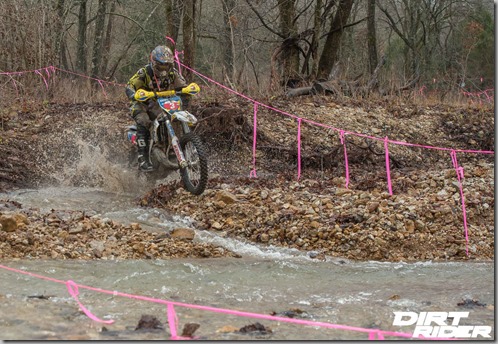 Photo by: Shan Moore
Here is Nick in another part of the course that has huge rocks we call VW: 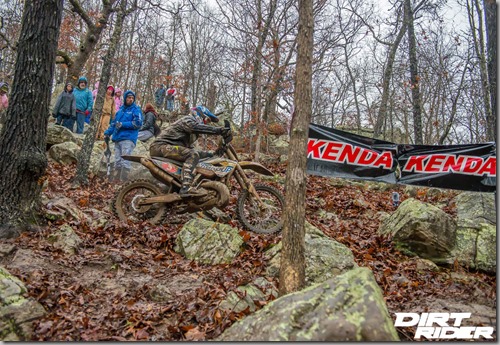 Photo by: Shan Moore
After a day of hard riding, the top 25 get invited to take on the most difficult parts of the ranch in the dark of night. All of the spectators find a good place to watch and it gets a bit crazy. I think it is my favorite thing I do each year. Jordan Ashburn made the obstacles look easy and went on to the win and the $2500 first prize. Here are a few shots that were taken of the night race:
This is Caleb Haynes from Rogersville, Missouri. He is a local pro and an awesome young man. He fought hard and finished 3rd for the day. 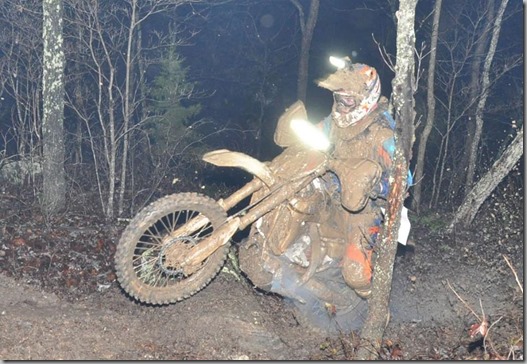 Photo by: Linda Fuerst
This is an awesome shot of the carnage on an element called “Something Special”. 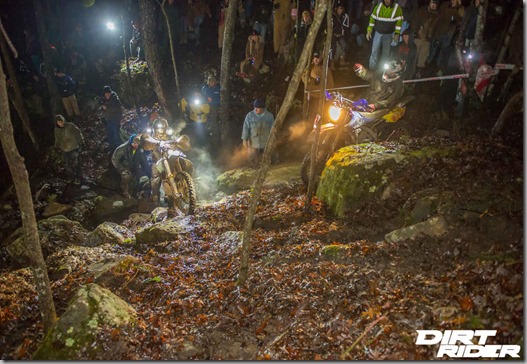 Photo by: Shan Moore
Another shot with the big crowd getting into it. The spectators may not help the riders even if they want to. 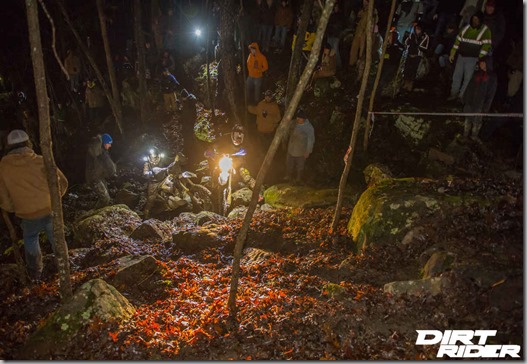 Photo by: Shan Moore
We spent much of the rest of the evening helping people get out of the parking area with the Kawasaki Mule and the Tractor. I even spent another round on Sunday morning for the folks that decided to stay another night. We got everybody on their way by 3 in the afternoon.
You may ask, “Why do people do this?” My answer is always the same. If you don’t understand why people do this, you probably don’t understand why people climb mountains or run triathlons or anything else that tests ones capability and endurance to the maximum. It just takes a special kind of person and I am proud to be part of this awesome sport.

I have added a video that I took and edited of the night show at Something Special.


It is always surreal when everyone leaves and we are the only ones left at the ranch. The quiet is nice, but now the work starts to flatten the field and clean up the ruts. The good news is this place heals as well as any land I have ever seen. We should be riding again by the end of the week.
How was your Thanksgiving Weekend? I hope it was as much fun as mine was.

Now that the race is over, our preparations will get pushed into high gear to get moving south for the winter. We are still purging and organizing all of our worldly possessions. We will stick around until Christmas and then head to Texas.
Posted by ktmissouri at 12:18 PM