It has been about a week since I last made a blog post. We have been very busy with family stuff. I have also had to be careful to not write about where we were going because we were all keeping a secret.

Kim's family is having a surprise 80th birthday party for her Uncle Kenny. Kenny lives on Galveston Island. The objective of the first leg of this trip was to make it to his birthday party. The party was on January 23rd and it as expected to be a large family gathering. Kim and I love family gatherings. For many years, I missed many family gatherings because of work requirements, I love the fact that I now get to attend.

Before I get into the party, I need to catch up on a few happenings before we left Goose Island.

On January 18th, we made the drive and ferry ride over to Port Aransas. This is a small beach community where Kim's sister Erin, and her husband John lives. They just moved into a new home and we were looking forward to checking it out. It is a really nice home that is on the bay side of the island, very close to the ferry landing. I had the opportunity to play some wii with their daughter Halle and then we played a game called "Crimes Against Humanity". Their adult daughter Daisy joined us for that game. Let's just say it was interesting? The house is very nice and we really enjoyed dinner and the visit.

January 19th was our anniversary. I talked about what it meant to me in a post last week, but on the actual day, we just relaxed and had a fairly normal day. We did go out to dinner, but that was about it for abnormal. We went to dinner at a place call "Moondog Seaside Eatery" it was a cool place with a large deck with an open wall looking out into the bay. 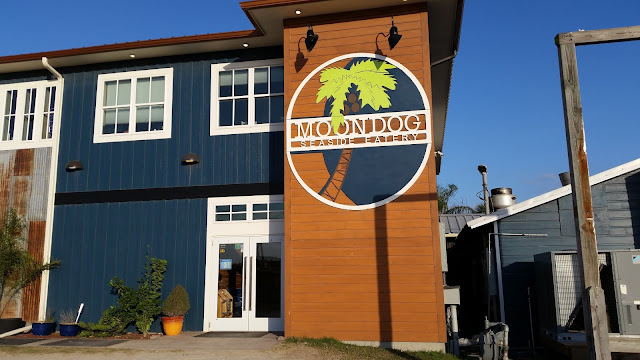 The food was OK, but not great. We enjoyed sitting and talking and looking out at the boats in the marina. Kim commented that she really preferred when we ate at home. I agree. I love to cook and I really think I can cook food that tastes just as good and it is much less expensive. How is that for being full of myself. It was a nice compliment. It may also speak to the fact that we are cheap.

They had some funny chairs that we both had to try out. It was pretty appropriate that I selected the back side of a horse. 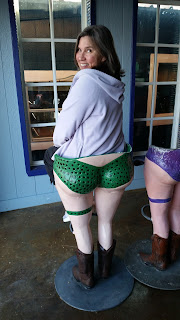 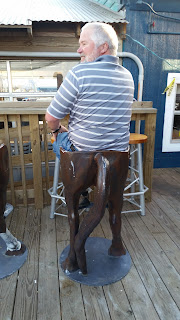 After dinner we went for a walk on the pier at the campground. It was a beautiful evening. Two fish had been caught on the pier. They were large black drum. One was 42 inches. Kim enjoyed the fact that both had been caught by women. Maybe I should just let her do the fishing in the family.

We ended up spending 8 days at Goose Island. We had a real mixed bag of weather. We had some beautiful 70+ degree days and we had some 40 degree days with wind and rain. The good news is no freezing weather.

On January 20, it was time to move on. We decided to drive through rural coastal bend Texas to get to Galveston Island. We drove right by the South Texas Nuclear project. My family knows the significance of the project to us. 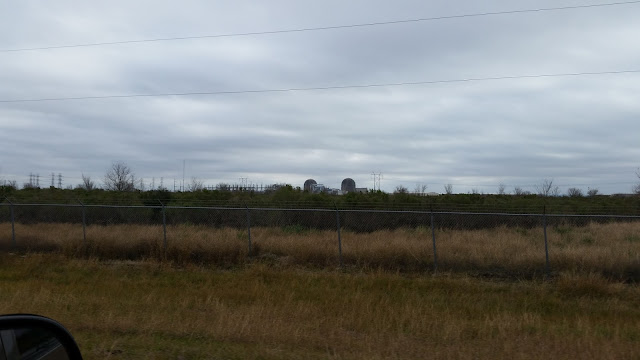 The drive was cool with no traffic and only very small towns. We crossed over the bridge on the far west end of Galveston Island. I was blown away by the amount of development since the last time I was down on that end of the island. It was solid beach homes on stilts all the way to the State Park. The Galveston Island State Park is one of the few sections of the gulf side of the island that is now undeveloped. I just hope a large hurricane does not make a direct hit on the west end of the island. The damage would be catastrophic. They built a 13 foot high seawall on the east end of the island for a reason. The west end does not have that protection. The good news is few of the houses are permanent residences, most are beach houses for the affluent in Houston and other parts of Texas.

I will write more about our visit to Galveston and the family gatherings in my next post. I should have some time to write in the next couple of days. We are now in Lake Charles, Louisiana and it is raining and cool. (I can't say it is cold. The temps here are about 50, but that is warm compared to my friends up north)
Posted by ktmissouri at 10:03 AM