We left Cleburne State Park on Tuesday, January 5. I had decided to drive about 70 miles south to a SP on the most direct route south. Which is the general direction of our travel. While we were driving, Kim asked why we were going there. I did not really have a good answer. She then began to tell me about a park she had looked at called Lockhart SP. She wanted to go there to see if she could go see her aunt that lives in New Braunfels. It sounded ok, but was way out of our way. My practical side was in charge and was resisting the additional miles. Then she said the majic words: "It has a golf course!" I said," What did you say?" She knew she had me. Yeah it has a golf course at it is only $9 per day to play all you want. SOLD!

One of my biggest weaknesses is when I have a plan, I have trouble changing it. To the point that I will go headlong into a bad situation simply because that is my plan. I am working to change that. We have no reason not to be flexible in our plans. It certainly would have made sense to discuss this prior to departure, but it all worked out.

We changed our route and headed south. We had left late because we were not going that far. Now we had to keep moving if we were going to make it by dark. That plan was going well until I saw a Texas Dairy Queen with plenty of parking for our rig. We have to stop at one each time we are in Texas. We just have to. If you are not from Texas, you just don't understand. A Texas DQ is not like one of those DQ's from up north. Totally different menu and full of food that is really bad for you. We did what we had to do and then got back on the road.

The good news is that it stays lighter longer this far south, so we made it before dark and found a nice site right on the 2nd fairway. I walked out on the course shortly after arriving and was amazed how nice the course was. This is a 9 hole course with bermuda greens and fairways. It was originally built by the CCC and it is well maintained.

It rained overnight and the course got a good watering. I got up to the office at about 10AM and there was not a misprint. I could walk and play all day for $9. I went and got my clubs and headed out. It is not too hilly, with only one significant hill. I walked, carrying my clubs and played 18+ holes. I was pretty tired by the end of the round, but I had a blast. I did not play well with a 50 on the first 18, but my swing got better and I broke 100 with a 47 on the second 9. Here are a few shots of the course: 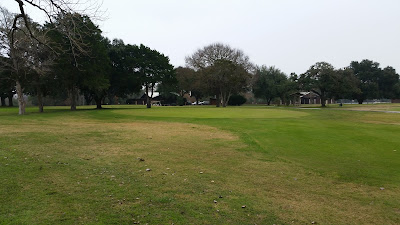 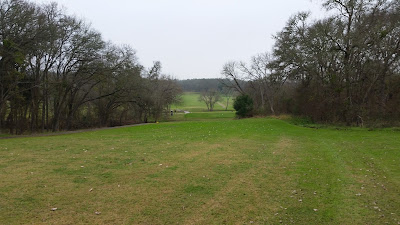 You can rent a cart for an additional $11 per 9 holes, but I am really trying to get in better shape, so walking was just the ticket.

I know I have way too many passions, but I love to play golf. I really love to play golf on an empty golf course all by myself when I can take my time and really enjoy the day. This was just that kind of day. It brought back memories of my younger years when I could walk and play 36 holes in a day. This was a 10+ day!

The next day, Kim left to go see her aunt. I headed out to play more golf. I was walking up to the clubhouse and met a couple that told me that they were on a mission to play golf in all 50 states. How cool is that?

The course was once again empty and I decided to walk and play 9 holes and play two balls to get my 18 hole score. This started the white versus yellow ball death match. The yellow ball prevailed with a 45 to the White ball's 48. I was happy with the 93 as my swing was starting to get more consistent. The sun was out and it hit 70 on that day. After having a bite to eat, Kim was not back and Jeopardy was over. It was still daylight for about an hour. What did I do? Go back out for 6 more holes! What an awesome day. 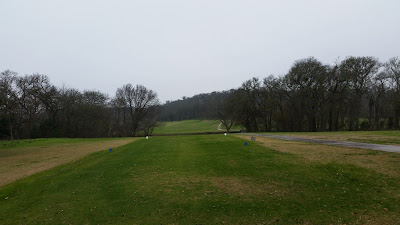 When I retired, I thought I would play golf on a very regular basis. As it is, I have not played much at all. The last time I played was in SLC with my friend Laurie and his two sons last June. That is a bit strange. I can't really explain it. I guess the main reason is that it is not something that Kim and I do together and we have really been having fun doing things together in the past two years. This is one of the many examples of the difference between what I thought my retirement was going to be like and the reality of what it is. Not bad, not good, just different.

We were planning to stay longer, but they were full for the weekend. That turned out to be a good thing because I was pretty tired after two long days of golf. This SP certainly gets the status of "Hidden Gem". I loved this place and would love it more if I could convince some family members to join me there. How about it Richie?

We were looking for our next stop and knew we wanted to head south. To find out where we end up next, you will have to come back for the next entry. I found more really cool stuff.
Posted by ktmissouri at 11:21 AM