Another week as gone by since my last post. It has been a very busy week. My partner Bob brought his motor home out to the ranch and stayed most of last week. He worked on the trails while I mostly worked around the ranch. There is always mowing to do and equipment to maintain.

While mowing, the mower just popped a quit. I had to pick the back end of the ZTR mower up with the tractor and drag it back over to the shop. It looked like there was a problem in the valve train. I removed the valve covers to take a look. The good news is that one of the rocker arms had worked it's way loose. I reinstalled the rocker arm and the mower now runs. Yeah!

I also spent some time working on my riding machines. I was hoping to get the grand kids to do some riding over the Mothers Day weekend.

We have a large elm tree directly in front of our trailer. We have seen a resident of the tree before.  I was walking back from the shop and this big black rat snake was laying in the grass. 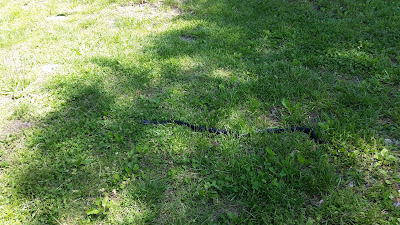 I would estimate him at 4 feet long. It was really cool to see him climb up the tree and quickly slip into a knot hole on the tree. That is three big snakes we have seen in the past two weeks. I am glad none of them are poisonous.

We were really looking forward to having Shannon and Brian and their kids come out to the ranch for Mothers day weekend. The good news is that Scott and his friend Jim came out on Friday night also. It was good to see those guys. We did some riding on Saturday morning. Jim has been working on his riding and he is improving nicely. The bad news is that Hannah and Eve could not make it this weekend.

As I wrote in my last entry, Kim was sick with a cold earlier in the week. She made a nice recovery, but then I was sick for the weekend. It was not too bad, I was able to push through, but I was whipped by Sunday evening.

We had a full weekend. We had a big campfire on Saturday night. Then I took Brian and Shannon on a tour of the property. We went to a few places they had not seen before.

Brian wanted to ride the 4 wheeler, so I led him around the property. He said he had a blast. Will rode with me in the mule. Here is a shot of the Grand Canyon of HHR. 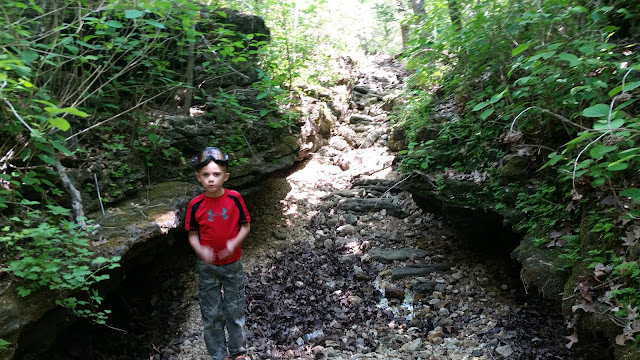 I did not doing a good job taking pictures this weekend, So, I got permission from Brian to use a few of his.

After the 4 wheeler ride, we decided to go fishing and shoot some guns. Both Isabella and Will caught a number of fish. Will likes to give them a kiss before letting them go. 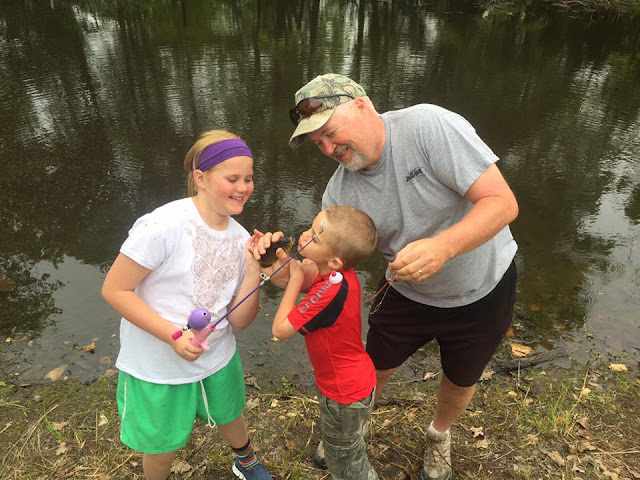 Shannon and Isabella had gone back to the lodge. We were getting ready to start shooting and Will had a half worm on his hook. He said "One more cast". Brian and I were watching when his bobber went down with unusual speed. It soon became evident that he had hooked a large bass. I had hooked a large bass a couple of years ago when I was fishing with Will, but we did not get it to shore. Will reeled this one in all by himself with Brian and I lending advice and filming. We did not weigh it, but it is well over 7 lbs. 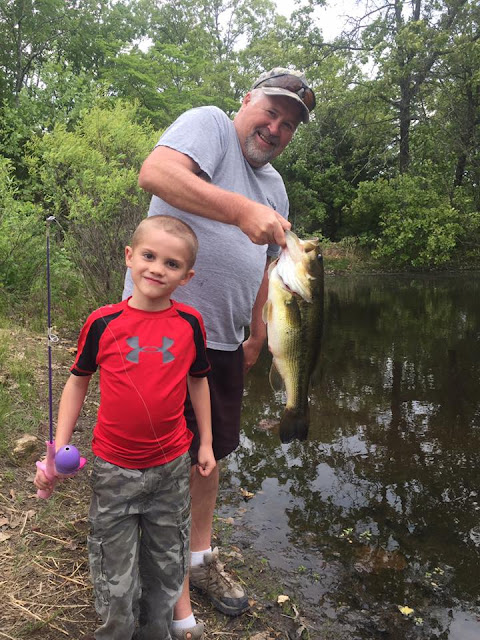 He caught that on that little princess fishing pole. WOW!

Will was so proud of that fish. Brain and I were amazed. That is a story that will be retold time and time again for the rest of our lives.

You can see the buzz cut Kim gave Will. Kim gave me one a few days before, so Will wanted one too. I love having short hair in the hot and humid summer months of Missouri.

We have been enjoying watching all of he birds returning to the Ozarks. We have had finches, bluebirds, robins and many other varieties. We also have seen a regular show of hummingbirds at our feeder. The one on top has claimed this feeder as his own and defends it rigorously. 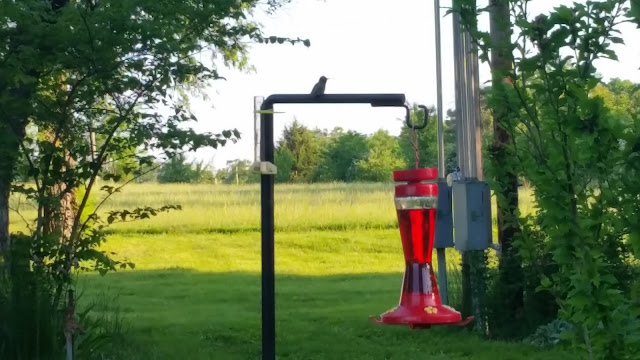 It has been a fun week at the ranch. I have had some great friends come out to ride. I really enjoy catching up with my riding friends.

I will try to do a better job with the camera. There is no lack of content, I just need to remember to take it out of my pocket and capture the moment.

We have big plans for this coming weekend. Unfortunatly, I hurt my back yesterday and writing this blog entry is about all I can do right now. Hopefully, I will feel better tomorrow and I can go play with Michael and Scott. I will let you know how that goes in my next entry.
Posted by ktmissouri at 10:23 AM