We left the desert near Bouse, Arizona on February 5. I really loved our private little spot. I think part of the reason I liked it so much is that I was dreading the next part of the trip. Dreading may be too strong a word, but I really like solitude and when I think of Southern California, I do not think of solitude.

Our first move was all of about 40 miles to the town of Blythe, California. We were concerned about crossing the California border. We had read about the check point, which is mainly for agriculture protection. Kim carries a house plant with us that she has had for 14 years and was her grandmothers. We had read that they may take those on inspection. As it turned out, when we arrived at the checkpoint, they just waived us through. Cool, one less thing to worry about.

We decided to stop in Blythe to camp along the Colorado river and to get a few things done before moving on. We did find a nice park through Passport America that is called Hidden Beaches that was only $21 per night. We were hoping for OTA TV, but we had no channels. This was Super Bowl Sunday and I really wanted to watch the Super Bowl. As we were getting unhitched and setting up, our neighbors came over to say hi. They are from near Edmonton, Alberta and are on their way to Mexico. Here are some shots of our campsite on the banks of the Colorado River: 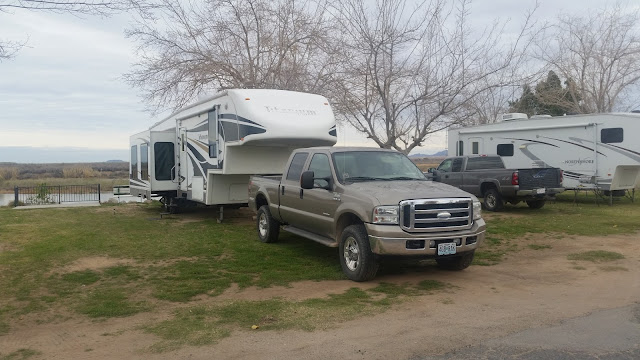 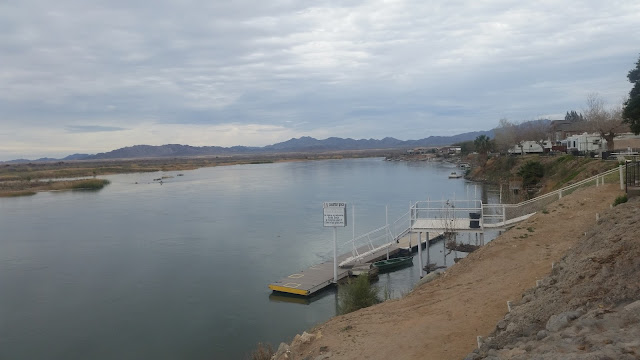 As time for the game to start neared, I got set up to watch the game on my phone. I get the NFL Mobile App on my phone for free with my Verizon plan. Kim went outside and spent some more time talking to our neighbors. It was not long before Wayne was over at our door asking me to come over to his place and watch the game on his TV with his Satellite. He had no interest in the game, but insisted. We ended up having an impromptu Super Bowl party complete with a pot luck dinner. We really had a fun time getting to know them. Here is a bad picture of Wayne and Liz along with Kim: 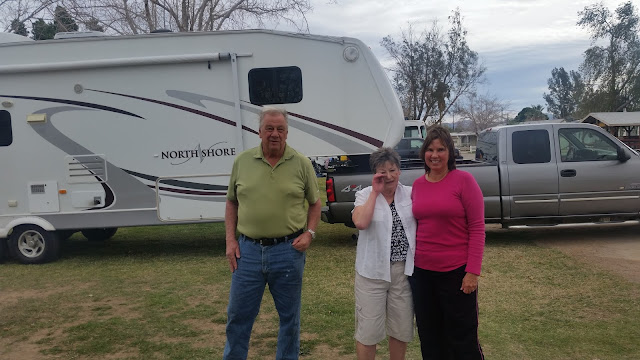 The next day I went into Blythe and got the oil changed in the truck. I usually get it changed at a Ford Dealership because they have good prices and the Ford recommended oil. I found that the California Ford dealers are much more expensive. I went to a quick lube place in Blythe and got my oil changed for $85. That is a good deal on my diesel. We have driven about 7000 miles on this trip so far.

Wayne and Liz had gone out for a walk and met a local person who had many loaded fruit trees in her yard. She told them to take as much as they wanted and send other RVers down. We decided to see this for ourselves and took a walk to see if we could find the house. It was right where Wayne had said and we went up to the door to ask permission. She was very nice and was an RVer herself. We picked 4 bags of lemons, oranges and grapefruit. You can't beat free! 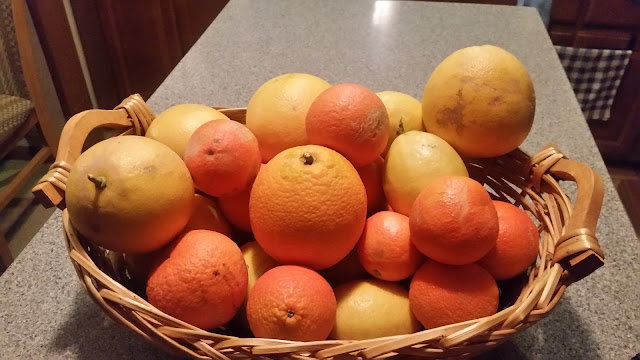 The fruit does not look perfect, but the taste is awesome. Some of the juiciest citrus I have ever eaten.

On Tuesday, February 7, we were ready to move on to a site near Palm Desert, California. It was pretty windy for the first half of the drive and we were also gaining elevation most of the way. The truck was working a little harder than normal. I was glad to have the fresh oil in the motor. The drive was about 130 miles, so not too bad.

We left interstate 10 and headed out to a park along the edge of the mountains. It is a county park called Lake Cahuilla. They are also a Passport America park and is a bargain at $15 per night with water and electric. The park sits along a man made lake and is right up against the mountains. 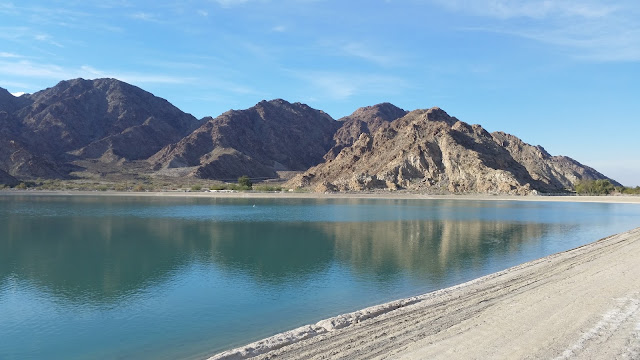 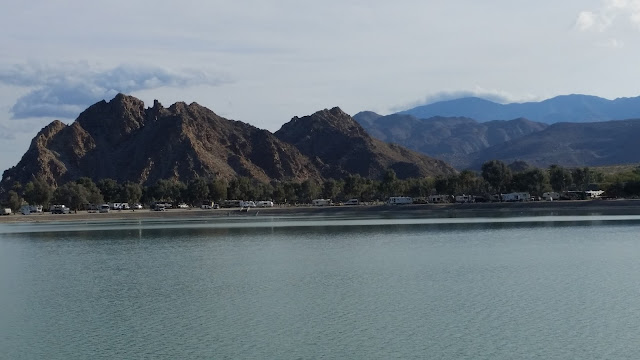 It is a pretty nice park and can accommodate large rigs. It has a primitive camping area that is also an option if they are full. There was plenty of availability during the week. The only problem with this park is that there is a shooting range on the far end of the lake. It is a range that is used by local law enforcement and is not open to the public. It is clear they are training for a war and they get to shoot as much ammunition as they want. The rapid fire action sounded like a machine gun much of the time. They at least shut down around 7 PM before starting back up at 7 AM. It really amazed me how much ammunition they were going through.

I also found it interesting that this park is right next to PGA West. This is a complex of 6 top level golf courses. This is the home of a PGA tour event that was formerly called the Bob Hope Classic, now it is some corporate sponsors name. The courses look amazing, but way out of my budget.

Now, you may ask yourself, why did they stop there? Well, Joshua Tree National Park is just about 40 miles away and we wanted to make a day trip through the park. I will write all about that visit in my next entry.
Posted by ktmissouri at 12:32 PM