I am writing this entry from Orange County, California. It feels strange to be here in a campground in the hills in one of the most populated counties in the US. We can drive a short distance and get into the suburban area of greater Los Angeles. I will write more about this place and our visit to this area in coming entries, but as always, I need to catch up a bit.

We only stayed at Lake Cahuilla Park for 2 days. The main reason we stopped there was to visit Joshua Tree NP. We only planned to visit for one day and February 8 was going to be that day. The good news is the weather was perfect as we took off for our full day drive.

We left the populated area of La Quinta and headed out into the farm fields. They were growing a diverse mix of fruits and vegetables. The one thing that we had not seen before was the groves of date palms. We then headed into Box Canyon Wash that was still south of I 10. This area if beautiful with high cliffs on both sides of the road. There is also plenty of dispersed camping because this is BLM land. I was wishing we had camped there.

We crossed over I-10 and then entered the park from the south. We have to stop and take the entrance sign picture. This would be #26 on our adventure. 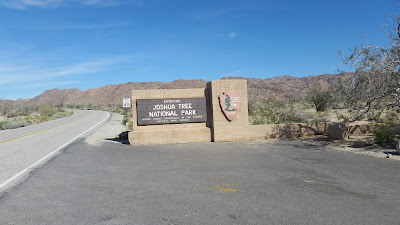 We stopped at the very limited Cottonwood visitor center. I was a bit surprised to see that it was about 25 miles to see the first Joshua tree. We had steadily gained elevation as we drove. Our campground is at about 600 feet in elevation. The park is between 3000 and 4000 feet. The Joshua trees grow at the higher elevations.

We had heard that this was not one of the most spectacular parks in the National Park System. That is why we only allocated one day for our visit. Although the park does not have the awe inspiring vistas of some of the other parks we have visited, this is a beautiful place. As we drove along the main road, the surrounding mountains and desert landscape was very relaxing. 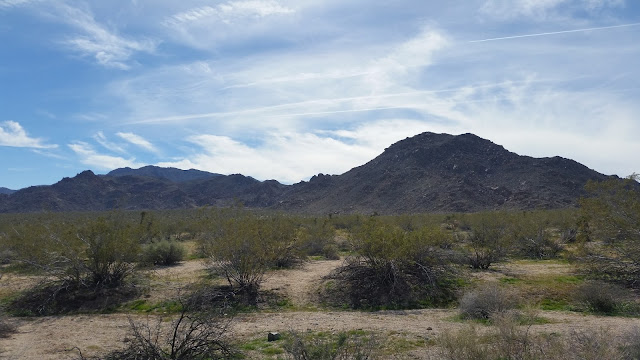 As you do in many parks, we drove along and hit many of the turnouts. We met a couple from Washington State and talked a bit about living on the road. They still have a house and are only starting to travel. They were riding a vintage Honda CT70 that he had restored. We did not lack things to talk about. We talked for a bit and then moved on. We stopped at the turnout for the Octillo cactus patch and they joined us again. There was only one trail guide left in the dispenser, so Kim did the reading and we all enjoyed the guided walk. You meet the nicest people on a Honda. 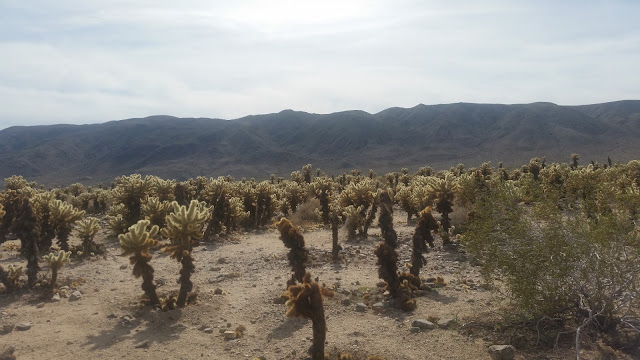 We left them there and we continued on. We drove through the park and looked for a nice place for lunch. We stopped to see some interesting rock formations at a place called Jumbo Rocks. The geology of this area is very interesting. 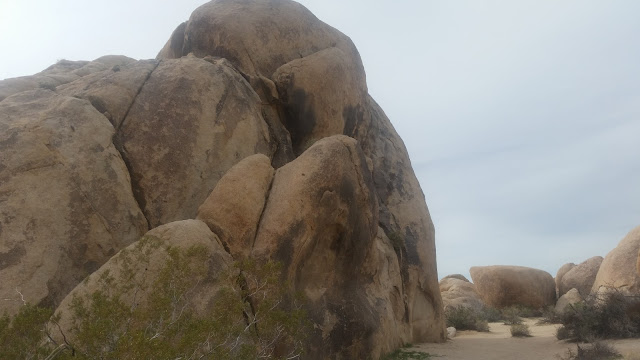 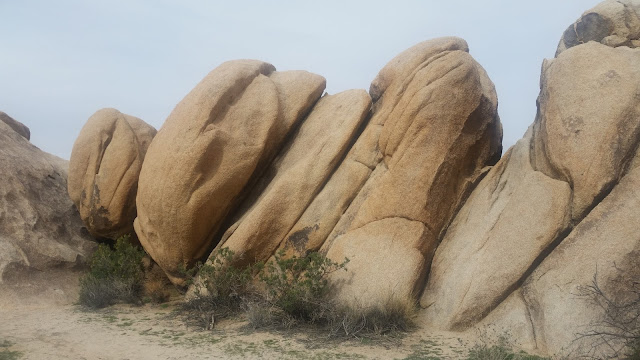 We stopped at a day use picnic area called Split Rock. We had lunch and then Kim surprised me by wanting to take a hike. It was a 2 mile loop hike that she failed to notice was rated "moderate".

I got some sweat on my camera lens at this point and my pictures were fuzzy for much of the hike. Too bad, because it was very cool. 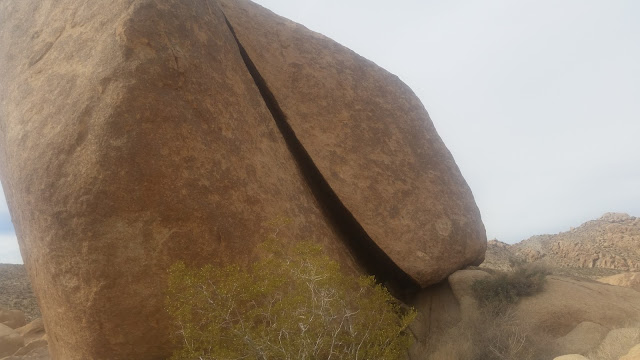 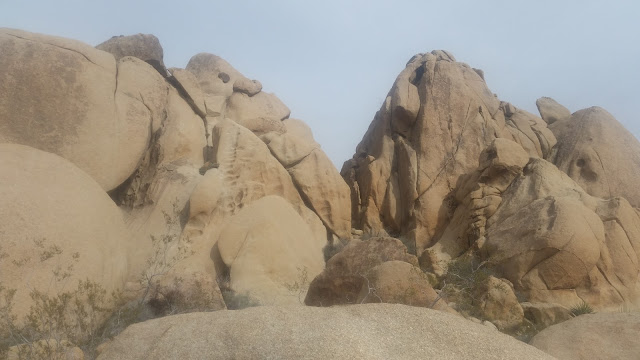 I really enjoyed the hike and I think Kim did also. These rocks were much higher and we even saw some rock climbers up on the highest ones. I really think the thing that motivated Kim to take the hike was a 74 year old woman that stopped to talk to us while we were eating lunch. She headed out on the trail in front of us. Kim wanted to make sure she made it OK. Well, we never caught them.

At this point, we started to see Joshua Trees. I was expecting to only see a few, but there were large groves of them. 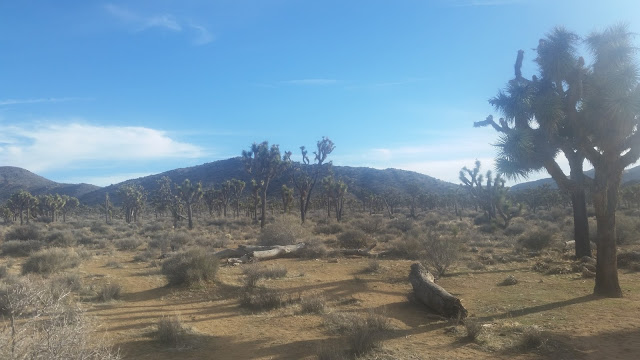 We stopped at the Keys view overlook and had a nice view of the valley we were camped in and the surrounding mountains including Mount San Jacinto and Mount San Gorgonio. I will have to ask my Dad and brothers about them. I remember camping and hiking in that area when we lived here 50 years ago. 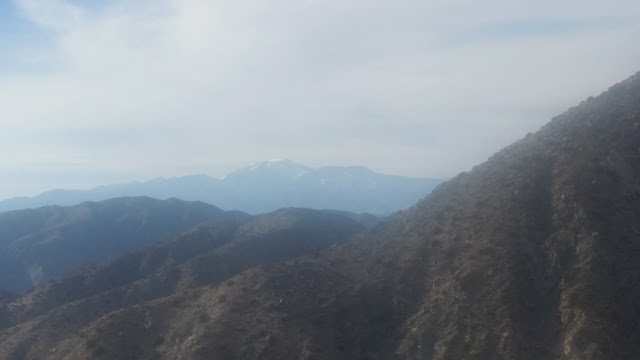 We then drove back down to the small town of Joshua Tree and then down highway 62 to hit I-10. Highway 62 has some very steep hills on it. I would hate to pull my trailer up those hills, but we saw many large rigs heading up the hill to the Lucerne Valley area. There was a big Motorcycle race up there last weekend called the "King of the Motos". Not much of a spectator event, so I decided not to go.

I would say that our trip to Joshua Tree was better than  expected. I did not have high hopes, but once again the National Parks are all spectacular in their own way. This one is good for a day trip and if you can camp at the Cottonwood area, a couple of days for some hikes would be great.

I got a note from my Mom last night that said I forgot something. My Great Grandfather is buried in Blythe, California. Darn, I would have liked to visit his grave. I never met the man, but maybe I would have felt the connection. I do plan to visit my Grandfathers grave in Livermore, California. I am not sure why I feel a desire to visit these places, but for some reason it is something I want to do.

Well, next it was on to Orange County. I was really not excited about driving the big rig into this area. I would have to say I was down right nervous. Come back to see how that went and what it is like camping in the middle of 22 million people.
Posted by ktmissouri at 11:27 AM