I am writing this entry from a small park on a lake about 150 miles east of the Ranch. We are going to stay here for three days. We just don't want this trip to end. We are not looking forward to getting back to the busy "normal" lifestyle that consumes us as soon as we get back to familiar territory. I do have a number of things that need to be done to the rig, so I will focus on that and get ready for the next trip. We are currently thinking about heading to the Great Lakes region in the summer time. For now, I need to stay focused to get the blog of this trip finished.

After two great days to get our visit of the Great Smokey Mountains National Park started, we were excited to see what else we could do. I was thinking about...fly fishing! 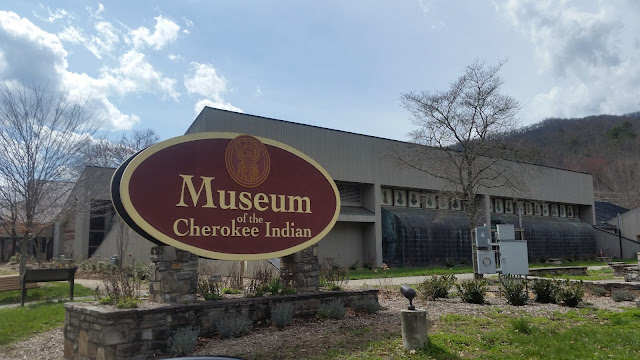 We started out by heading into Cherokee, NC to visit the Museum of the Cherokee Indian. The Cherokee inhabited much of the SE US before the European people invaded. The tribe was decimated by diseases brought by the invaders. They also brought technology that the Cherokee people had not dreamt of. Over many generations they became fairly integrated into the white man's world. There were many treaties that were made and then broken as the Europeans moved further inland in search of gold and other minerals and land to grow crops. Andrew Jackson worked with a number of Cherokee in his military exploits in the early 19th century. He wrote about being concerned that the Cherokee would ultimately cease to exist like many other tribes. His ultimate solution to the potential elimination was to create land in the far west to allow the 5 civilized tribes of the SE US to survive. The forced movement of these tribes became known as "The Trail of Tears". It is certainly debatable whether now President Andrew Jackson was noble or inhuman.

There were some Cherokee that stayed hidden in the mountains of North Carolina. They were pursued for many years, but ultimately were allowed to stay. They used money that was held by the federal government and purchased what is now the Reservation of the Eastern Band of the Cherokee Nation. In 1946, the tribe established a history and cultural center that later became this museum. We spent about 2 hours going through the exhibits and presentations. It is really quite moving. This all means more to me because I have some of this Cherokee blood in my veins as one of my descendents was a full blood Cherokee woman. I did not take many pictures. I wanted to focus on the content and experience. 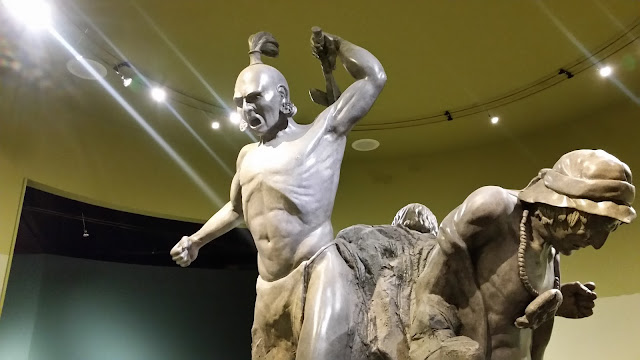 We decided to finish off this day with a hike along a creek in the southern end of the NP in an area called Deep Creek. It was a beautiful walk that included three waterfalls and countless smaller cascades down the rocky canyon. 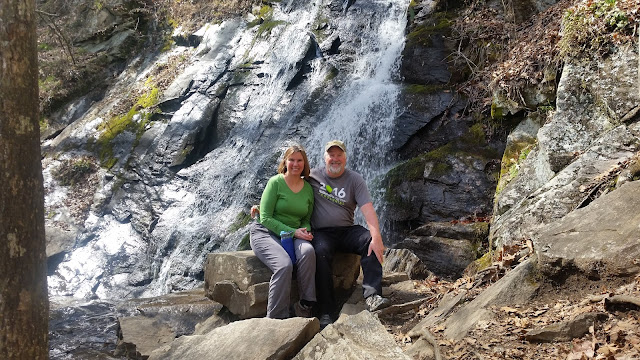 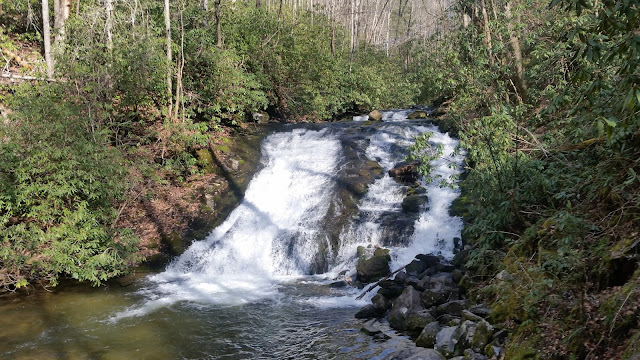 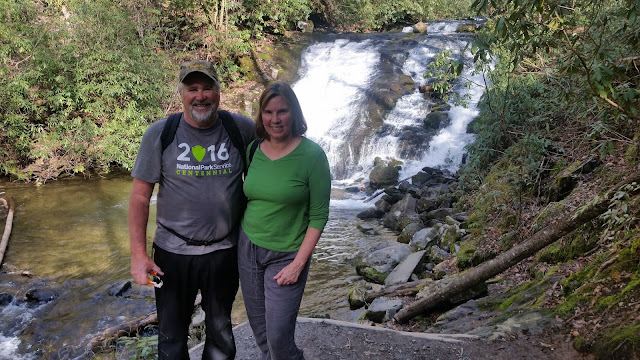 We stopped along the creek to fish and Kim did a bit of reading. It was a magical spot. 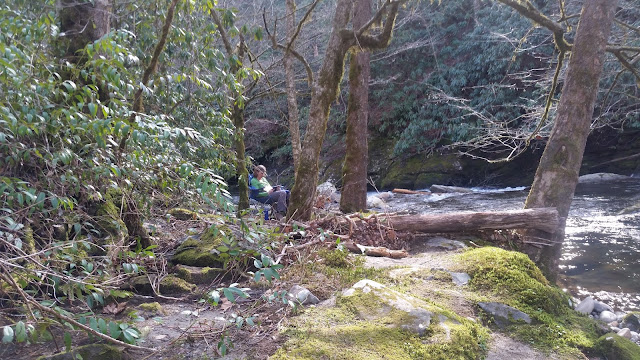 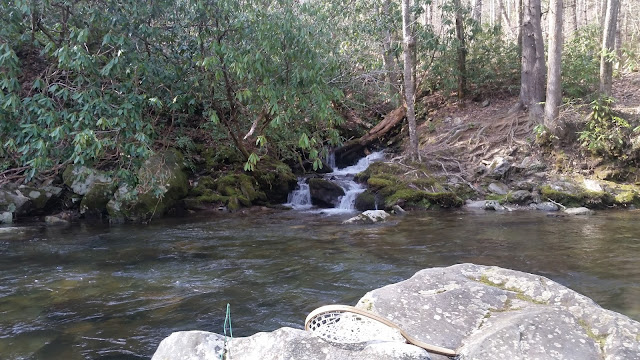 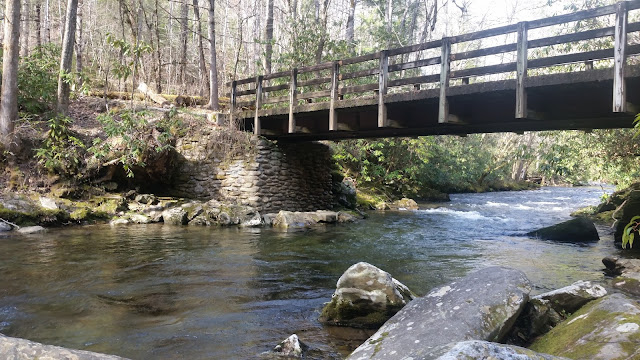 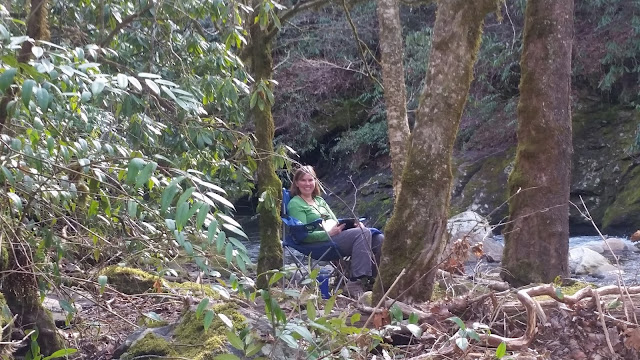 We ended up walking about 4 miles and I did not catch any fish, but it was still a very memorable day.

The next day, we decided to go outside the park to a place we had heard about. It is called the Joyce Kilmer Memorial Forest. Joyce Kilmer is the person that wrote the poem, "Trees". He had never been to this part of the country, but after he was killed in WWI, they decided to dedicate a small section of old growth forest to his memory. The trees in this area do not live as long as the huge trees we have seen out west, but it is still an impressive place. We enjoyed a 2 mile hike up through the grove. 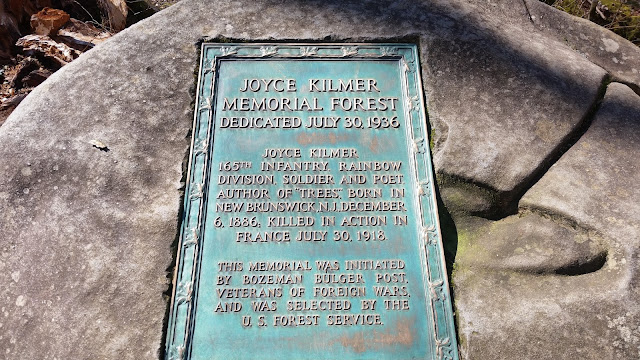 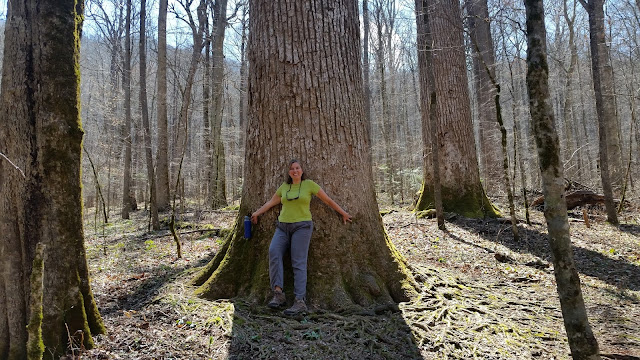 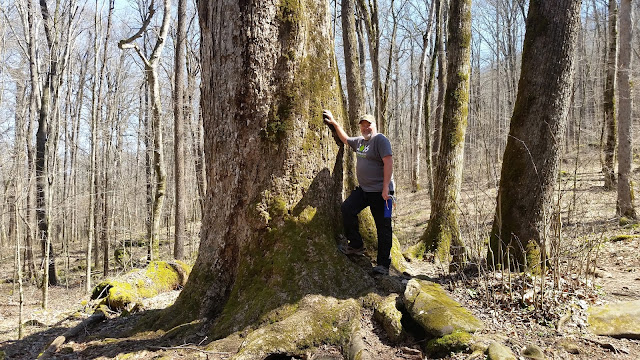 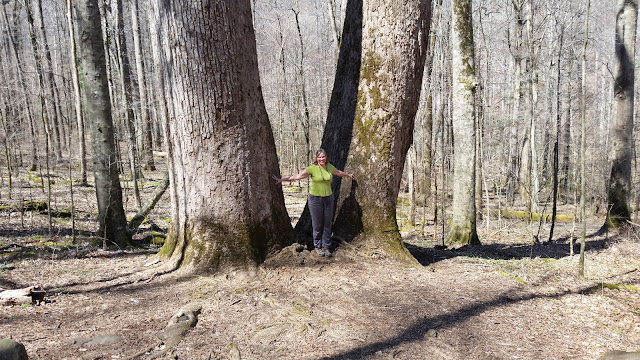 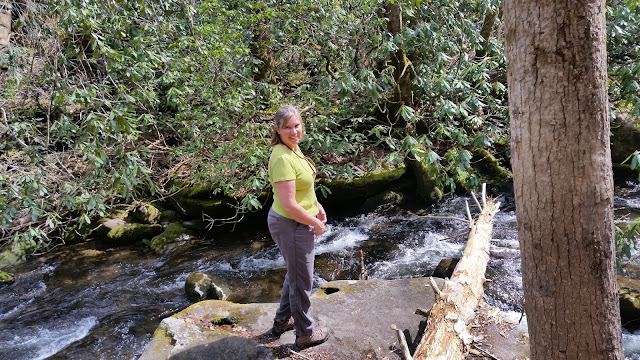 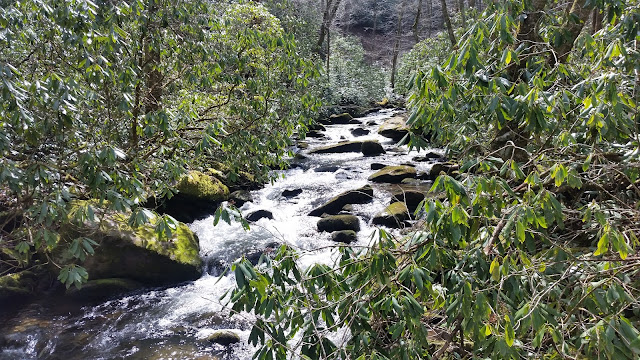 After our hike we drove about a mile to a small campground by a creek. It was completely empty and beautiful. We would love to camp there, but it would be a trick getting our rig in there. 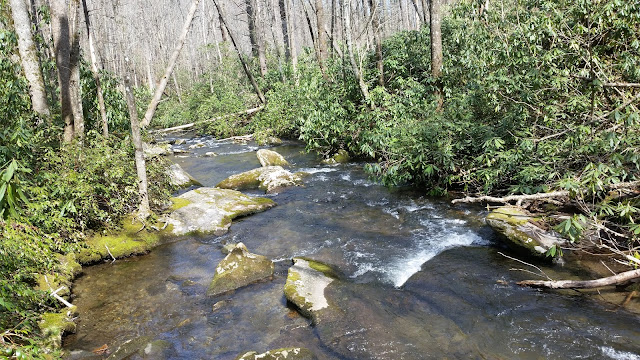 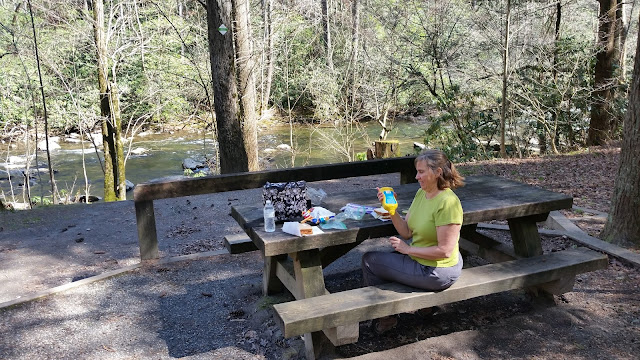 I decided that I needed to go fishing after our meal. I was rewarded for the effort with a nice little Brown Trout. The best part was Kim watched me catch it, so I have a witness. 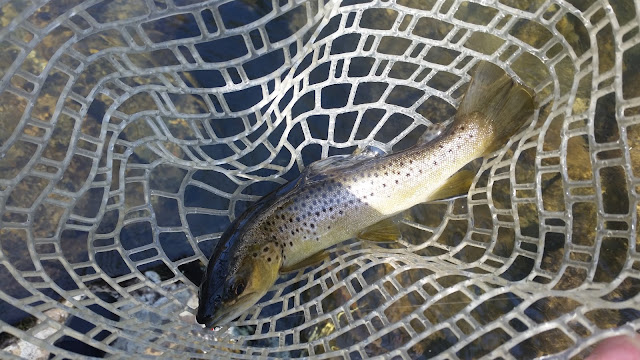 On the drive back to the campground we were able to capture this beautiful view. 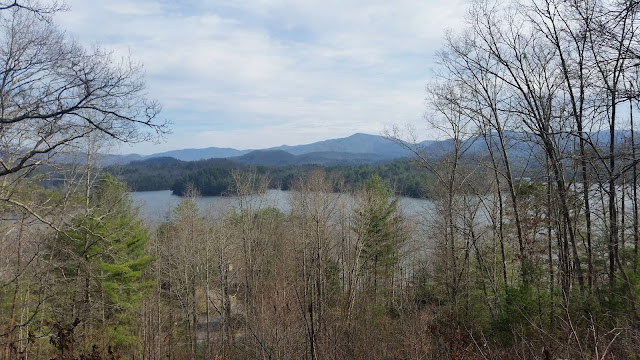 On the last day we were in the area, we took a drive up a place called, "The Road to Nowhere". This is a road that was built to provide access to family cemeteries and other places inside the park that were cut off when The river was dammed and Fontana Lake was formed. After millions of dollars, they stopped the project and decided to just take the families across the lake on boats.

We backtracked about a mile to Noland Creek. It was very steep down to the creek, so Kim stayed with the truck while I went fishing. It was a beautiful creek, but I was unable to coax any fish to join us at the dinner table. 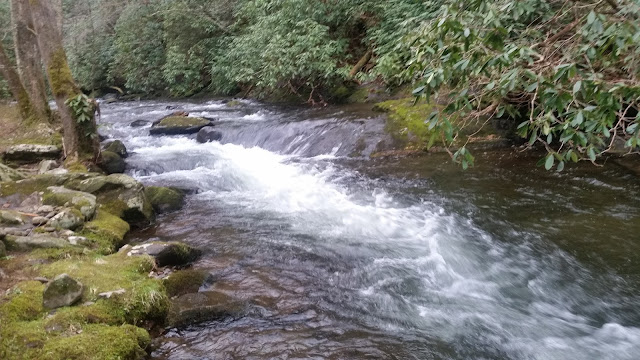 I took a short video that captures the sights and sounds of this beautiful place. 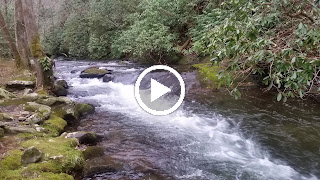 Here is one final shot of the lake and the view in the Western North Carolina mountains. 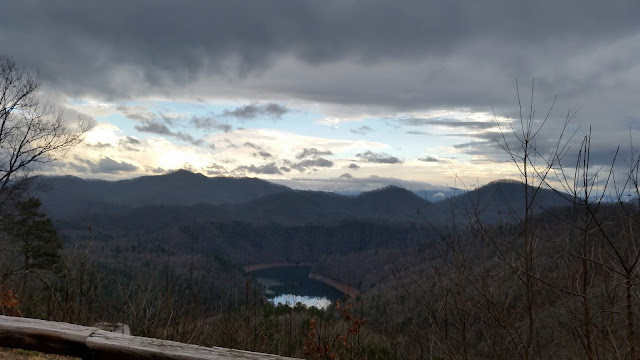 We both fell in love with this area. It is one of the few places we have found that we could visit over and over again.

We always wonder what is around the next corner. That is why we have little interest in going to the same place. There is always something new to see. Family is the only thing that brings us back. It was now time to move back to the west and time with family, but before we did, Kim decided we had one more National Park to visit. In the coming entries, we will begin our trip west and north. Yes, north in March. Come back to see how that works out.
Posted by ktmissouri at 11:30 AM