I am writing this entry on March 28 from the Land Between the Lakes in western Kentucky. We are making the final moves west to Missouri to see the kids and grand kids. We have missed them terribly and are excited to see them soon.

It has been a little over 3 months since we left the ranch in Missouri. During that time we have seen some awesome places and have done some amazing things. When we planned this trip, the centerpiece was to be Great Smoky Mountain NP. The time to visit this awesome place was now upon us and we were very excited. We left our Lake Powhatan Campground near Asheville on March 15 and drove the 60 miles up through the beautiful mountains of Western North Carolina. The snow was now mostly gone, so the roads were dry. I noticed many beautiful streams and rivers along the way. I noticed a few people fly fishing and knew then I would have to give that a try.

Many of the campgrounds in this area are closed this time of year. I looked around and found a Passport America park that was very close to Cherokee, NC called Ft. Wilderness RV park. I was not overly impressed when we arrived. It was full of mostly seasonal units, but I was not planning to stay in the park much anyway. The PA rate was $27 per night with FHU. We had good Verizon cell signal and all the networks on OTA TV. As it turned out the place was mostly empty and was very quiet. 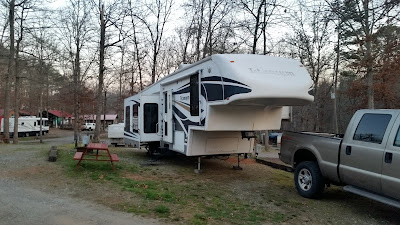 We did not waste anytime after we got set up. We needed to do laundry and there was a laundromat in Cherokee, which was only about 2 miles away...or so we thought. It turns out that that one was closed for renovation, but they told us about one in a small town near by called Bryson City. It was a beautiful 10 mile drive along the Tuckasegee river. There were a number of people out fishing and my interest was building. We found the laundromat and we got things started. I went for a walk and found the old courthouse had been converted into the Swain County Heritage museum. It was free and was interesting to check out. It gave me a lot of information about the area and the people behind the desk were great at giving me a few places to go and things to do. Our only problem now was how we were going to fit this all into our 5 day visit. 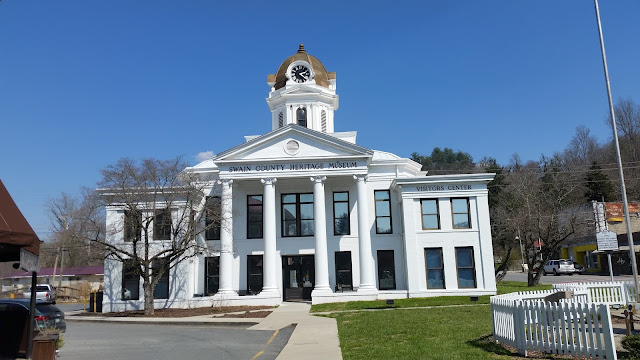 We later walked across the street to the Fly fishing museum. That was it. I had to find a fly shop. I got directions to the local shop called the Tuckasegee Fly Shop. The guy there took a bunch of time with me to show me the best places to fish and I, of course, had to buy some of his best flies. It's a win-win. That evening I went on line and was very happy with the North Carolina fishing rules. $32 for a 10 day out of state freshwater license with a trout stamp. I was now ready.

The next day we were up early (for us) and headed up to the Oconaluftee visitor center for the National Park. It is a small visitor center with an outdoor display of local farm buildings and local history. We then started the drive up into this area of the park. We stopped to see beautiful streams and waterfalls along the way. 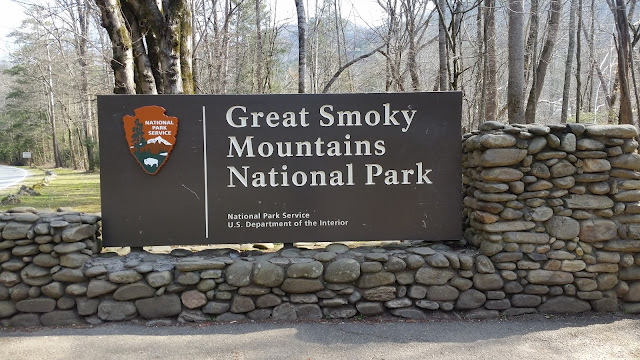 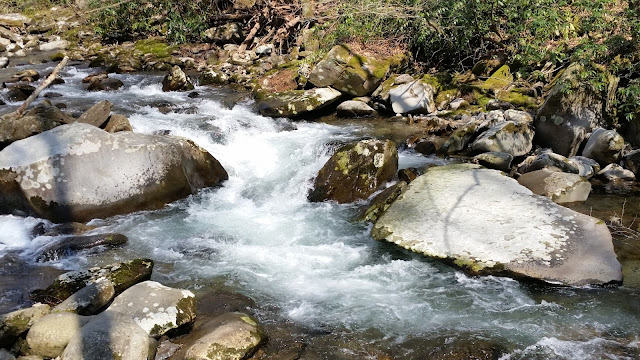 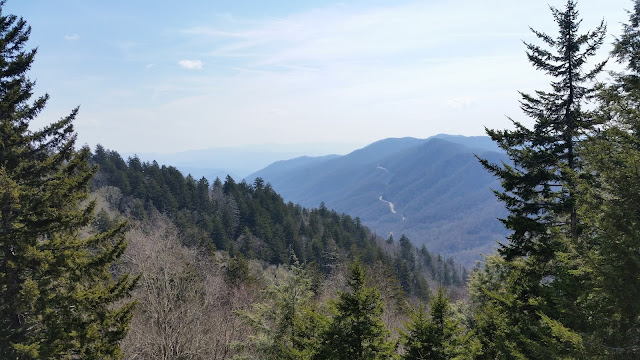 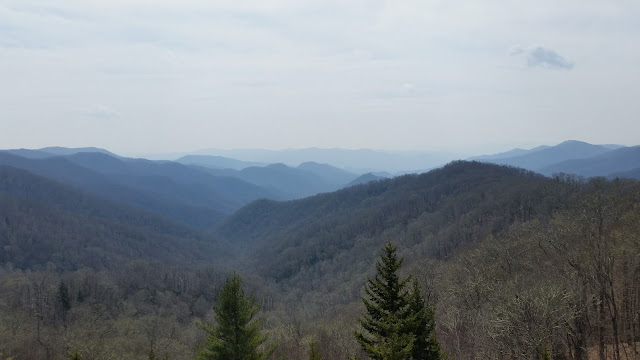 We went to Newfound Gap and enjoyed the views. The elevation is 5046 Feet. We then headed back down the hill and stopped at the old grist mill called Mingus Mill. A guy that was working at the Swain County museum the day before works as a miller during the tourist season at the mill. 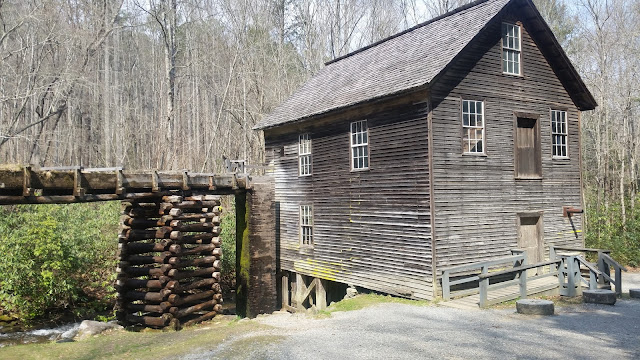 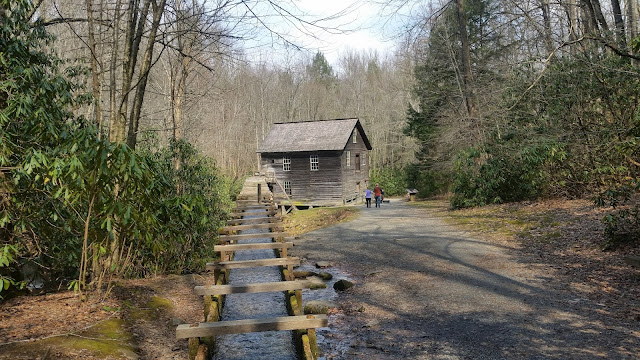 We then returned to the visitor center to tour the Mountain Farm Museum and take a walk along the creek. 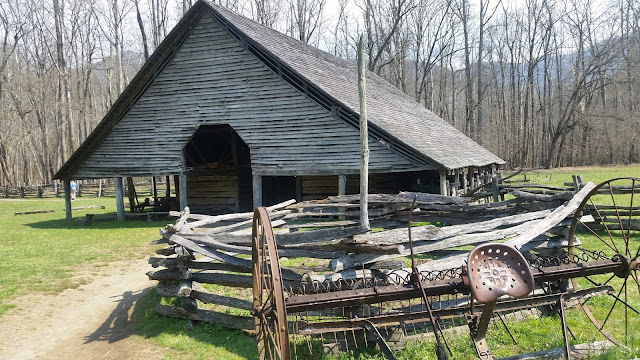 We then returned to our home and had an early dinner. After which, Kim settled in with a book, but I had other things on my mind. I asked Kim if she wanted to go to the river, but she gave me that look and said, "Have Fun". I was off like a shot. I went to one of the places that were expertly described to me by the guy in the fly shop. I was more than a little excited as I pulled on my waders and set up my gear. I studied the water carefully as I tried a few drifts with one of the brown "whooly buggers" that were sold to me. I did not see any activity on the top, so I stayed with a sinking pattern. I fished for about an hour of trying different little flows in this wide, rocky river and repeating the famous words of my brother " Fly fishing is not about catching fish".  It was a beautiful spot and the water was crystal clear. Then it happened. The monkey flew off my back and the 0 for this trip ended! This little rainbow took pity on me and made my day. 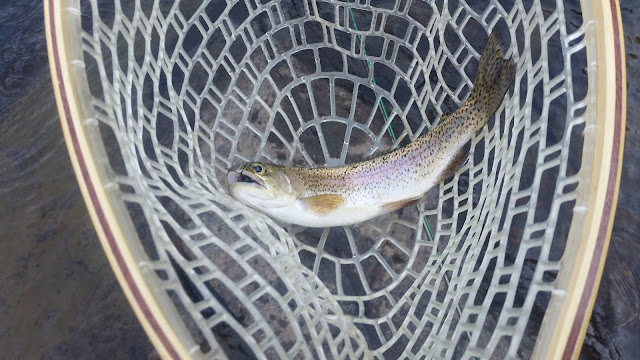 It was a great first day and a half. We had three more days and we had a bunch more we wanted to do. Come back to see what else we did and see if I could catch anymore fish. It is all about the fish isn't it?
Posted by ktmissouri at 2:58 PM