Our First Week of Sailing

I am writing this entry from Lake Stockton, Missouri on June 8. We have been staying very close to where we have the sailboat in a slip that we have rented. We are doing a monthly rental for $175 per month including 30 amp electricity.

We splashed the boat on May 23. I did not write much about that day in my previous entry, so I thought I would write a bit more. We arrived at the boat launch/marina at about 10AM. The sun was out with almost no wind. Unfortunately, it got hot quickly in that parking lot. Our 2 year old granddaughter Amelia was with us and that complicated the day a bit. We got the boat ready to lift the mast by removing all of the ties that we had done for the transport. We had some ideas about "stepping" or raising the mast. We had done it once at the ranch, but I had the help of one of my very strong sons. This time proved much more difficult. We partially lifted it once, only to find out that our idea would not work. We started over and I basically did a "clean and jerk" weightlifting move and got it to a full standing position. Kim installed all of the stays (cables that support the mast) while I held it up. There are a total of 6 stays (Headstay, backstay, and inside and outside shrouds on both sides).  With the lack of wind this part was not bad. By this time, we were pretty hot. We went to the marina store to make arrangements for the slip and some much needed ice cream. I went for Gatorade. We then lifted the motor and installed it on the mount and then the rudder. This entire process took about 4 hours. We were now ready to take it to the ramp.

The ramp is an interesting process. We back the boat down to the edge of the water and then block the wheels and raise the coupler off of the ball. Then we drive the truck forward about 10 feet and install the extended tongue on the trailer. The tongue extension increases the overall trailer length by about 10 feet, which allows us to push the boat further into the water. I wish I had a picture of that, but it worked perfectly. We were able to float the boat off of the trailer in about 5 feet of water and just the rear tires of the truck were in the water. The draft of the boat is about 3.5 feet with it's fixed keel.

By the time Kim drove the truck up to the parking lot, we were ready to go for a swim. We started the motor and went about 300 yards to a cove and dropped the anchor. We swam for about two hours and got our body core temps back down to normal. Amelia enjoyed that part of the day. Prior to the swimming, she was hot and whinny.

We then went and found our boat slip and after playing with dock lines for way too long, we put her to bed for the first night. It felt strange walking down the dock leaving her there for the night. 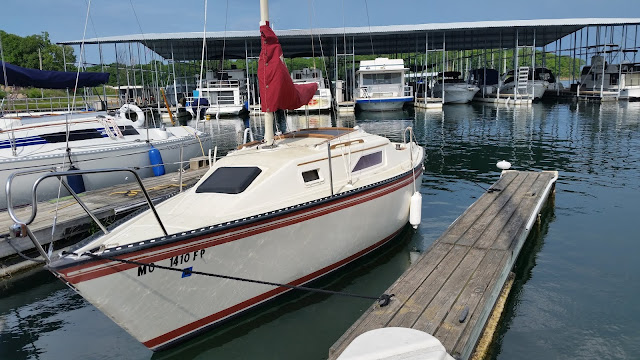 The next day we went out on our first sail. The winds were fairly light(maybe about 5 knots), but it was a perfect day for us. We sailed around for about 5 hours and we loved it. Kim was now ready for some stronger wind.

The next few days were the Memorial Day weekend. We knew the lake would be a bit crazy, so we decided to relax at Bob's. On Monday, we decided that much of the craziness would be done and headed out for our second sail. We started out with light winds. We stopped in a cove and dropped anchor. We cooked an early dinner on the boat and then the wind picked up. We raised the sails and Wow! We were sailing! I installed a GPS/depth finder on the boat and was surprised when we got the boat up to about 5 Knots in a wind of about 10 Knots. We sailed all the way to the dam into the wind and then sailed back to the marina down wind. We had a blast! Kim now had more confidence in my ability to handle stronger wind. I felt that I had complete control of the boat. Another great day. 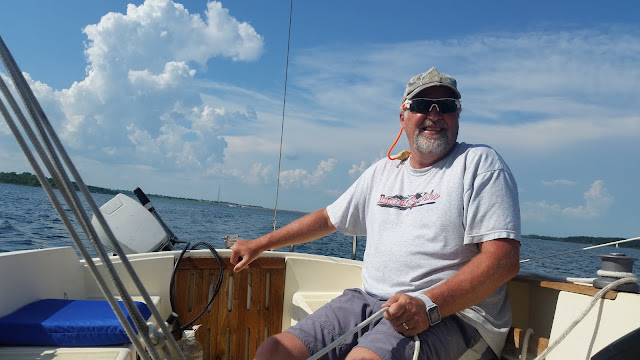 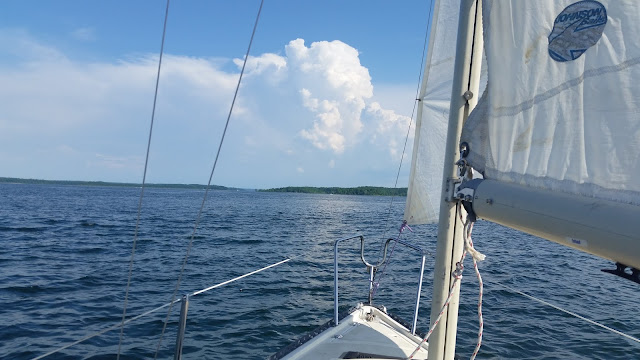 The next day our son Mark joined us on the boat. Mark has an interest in learning to sail, so the day became his first lesson. We had excellent wind for the first half of the day and Mark was at the helm for much of it. The wind shifted and dropped a bit, so we pulled into a cove and had lunch and did some swimming in the over 80 degree water. We have been having record highs almost every day. Well over 90 degrees this time of year is too hot, but the nice thing is the water warms quickly. We sailed back to the marina in light winds. Another almost perfect day.


We were ready for a couple of days off at this point. The sun was taking a toll. Bob was also getting home from Ireland and it was time to move the trailer from his beautiful home to the park we are in now. While we were at his house, we had some pretty intense storms come through. We also had some amazing sunrises and sunsets. 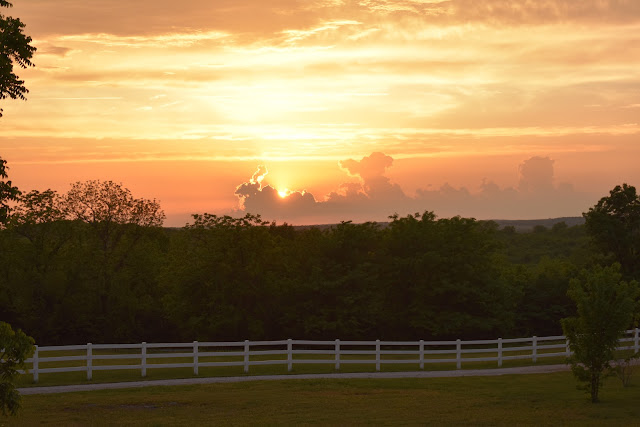 The first week of sailing could not have gone better. The second week did not go as well. We sailed in much stronger wind and we had our first damage to the boat from the strong winds. I will write all about that in my next entry.