As I mentioned in my last entry, we had a plan. On May 13, we would first take the trailer up to my friend, Bob's house to moochdock in his driveway, while he and his wife were out of the country. The plan was to then go to the lake the next day to start a 2 day sailing class. After the class was completed I planned to go back to the ranch to get the boat and bring it up to Lake Stockton and put it in the water for the first time. That is of course if during the class I determined that I hated sailing and would then go back and sell the boat and move on to other endeavors.

In the previous two weeks I had spent about $1500 on the truck doing the 200K mile service and replacing the rear brakes for the 4th time. The truck seemed to be running perfectly for the 2 hour tow up to Bob's. Just as I was pulling into his driveway the truck just died. It would crank, but it would not start. My truck was in the driveway, but the trailer was now blocking both lanes of traffic. It is not a very busy road, but I still felt the need to get it out of the way as quickly as possible. Kim ran up the hill to Bob's house to see if Bob could pull me off the road. I (being a Ford guy), had to suffer the indignity of being pulled by Bob's Chevy into his drive and up the hill to a place where we were somewhat level. We then used his truck to help me unhitch and leave the truck in a place where a tow truck could get to it.

The problem was that I had my first sailing class the next morning at 9AM. Bob is a great friend and offered to let me use his truck to get back and forth to the school. THANKS Bob!!!

I was up early on May 14. I called the Ford dealer in Bolivar, Missouri and arranged to have the truck looked at. I also arranged a tow truck to come out and get the truck. Kim would stay with the truck and trailer and hand off the keys. I would head off to my school. Everything went as planned until they called later in the day and told us they did not have anyone to look at it that day, they had two techs out.

The school went very well. It was two ladies and myself and Mark the instructor. We did some boat prep and then went out on the water. I actually sailed for the first time in my life and guess what? I LOVED IT! No need to sell the boat. We had good wind, Mark said it was over 10 knots. All I know, is there were whitecaps and we were moving along quickly. Each student took a turn at the helm. I learned a couple of very valuable lessons which will stay with me as long as I am sailing. I also gained confidence in the strong winds.

The next day there was almost no wind. I was not sure what we were going to do when I got to the dock. Mark said, "Go Sailing". I was amazed that we could move around very well in almost no wind. We did not go very fast, but we could still move. The combination of the two days and the very different wind conditions was an excellent combination for me. During the second day sail, I took the on-water test and did OK. Then, when we were off the water, I took the written test. I am happy to say, I made a 96. Before the class I was given a book that was about 120 pages packed with basic sailing information. I read it three times and all of that studying payed off. I think it also helped a great deal to do all of the work on the boat to help with the terminology.

When I got done with the test, I got the bad news from the Ford dealership. The truck had major problems. I called the next morning and tried to talk to the service advisor. He was not making sense and his pricing was unbelievably high. I checked with some other shops and then talked to another good friend, Dan (who owns an auto shop) and he told me that he could come up to Bolivar from Republic, Missouri and get the truck and fix it for me. I met him at the dealership and got a very cryptic diagnosis that I paid for and helped Dan load the truck on his car trailer.

I got a call from Dan a day later with more bad news, the problem with the truck was not the Fuel Injection Control Module, as the Ford Dealer said it was, it was actually the High Pressure Oil Pump. The HPOP is about $1600. It was a lot of work, but he would try to get it back to me the first of the next week.

To add to the test, one of the AC's on the rig was having issues. It was in the 90's so AC was needed. I determined it was a bad fan motor. I made the drive to Springfield to get one and installed it myself with the help of a YouTube video. That went well.

Over the weekend, our oldest Granddaughter graduated from High School. Congratulations Hannah! 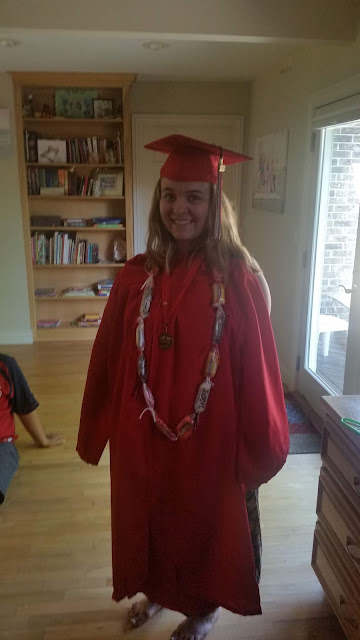 Our daughter Shannon had a very busy week going, so she asked if we could watch Amelia. Of course we said yes. She is just so cute, you can't say no to that girl. Here she is giving Bob's dog her daily petting. 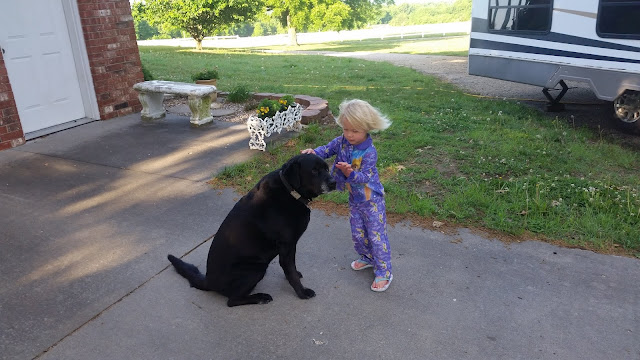 On May 22, I got the call that the truck was ready. Dan saved me a bunch of money and got it fixed fast. The total was still a little over $3K. I drove to the ranch from his shop and the truck was running perfectly. I hitched up the boat and hauled it back to Bob's house. All went well.

The next morning, we took the boat to the Marina and raised the mast and launched it for the first time. It was hot, but with the help of Mark (my instructor and person we bought the boat from) we got it done. We motored out and went for swim. Amelia was still with us, so she got to go for the first ride in the boat. We rented a boat slip for a month for $175 with electric. So, we will settle down and go sailing for the next month. It was tough and very expensive, but we got it done. Here is the boat in her new home. 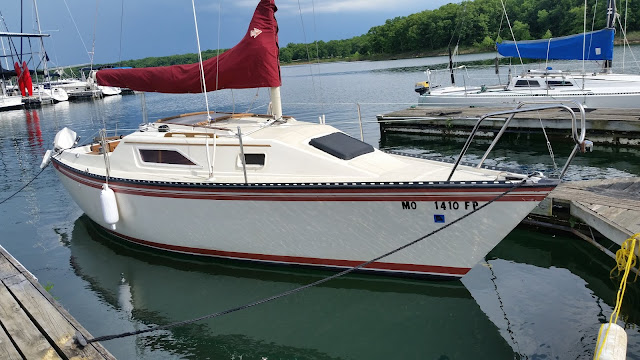 The next day, Kim and I went out for our first sail. I will write all about that in my next entry.

Posted by ktmissouri at 5:25 PM