I am writing this from South Bay, Florida. We have been here almost a week. The park sits right on the southern edge of Lake Okeechobee. We are leaving here on Sunday to head down into  Everglades National Park. It might be difficult to get in touch with us during the next two weeks. We should resurface around the 28th of January. Let's go back a little over 3 weeks...

We left Hart Springs on December 19 and headed south to Orlando. We decided to avoid the toll roads, which saved us the tolls, but cost us about an hour of travel time. No big deal to us. We were only traveling about 160 miles anyway. We did have reservations at Bill Frederick Park in central Orlando. This park is an unbelievable deal. The rate is a little over $20 per night with W/E and is in the middle of a large park with a large lake. We were only about 5 miles to Universal Studios and about 20 miles to Disney. We did make the reservations last July, so keep that in mind.

Our daughter, SIL and youngest granddaughter were joining us on the evening of the 20th. We did have one thing to do before they arrived. We wanted to go see a boat over in Titusville. Of all of the boats I have been looking at on the internet, this one was #1. We liked it, but more on that in later entries. We made it back to the park in time for their arrival.

Kim, Shannon and Amelia spent the next day at Disney touring around on buses and the Monorail checking out the Christmas decorations and the stores at Disney Springs. It was an almost free day, which allowed us to maximize the next day. And "Maximize" it we did!

Brian and I spent the day by going to Universal Studios to see the opening of "Aquaman" and then coming back to the park to play Disc Golf. That was the first time that either of us have played and we both enjoyed it a great deal. I will certainly have to do more, now that I have my own set of discs.

Shannon and Kim have never been to Disney World. They are both REALLY in to Disney. The movies, characters, etc. This was a trip of a lifetime for both of them. They have been researching it and reading about it for a long time. This was their BIG day. Brian and I went along with whatever they wanted and tried our best to be agreeable and positive.

We left for Disney about 6:40 AM. We were at the front gate by 7:20. The day was carefully planned. We had fast passes on certain rides at certain times to maximize the riding time for Amelia.

We took over 1000 pictures. It is impossible to show everything that we did and I am sure that the audience of this blog does not want to see all of those pictures anyway. Here are a few highlights:

The characters do an amazing job connecting to the kids. And the big kids. 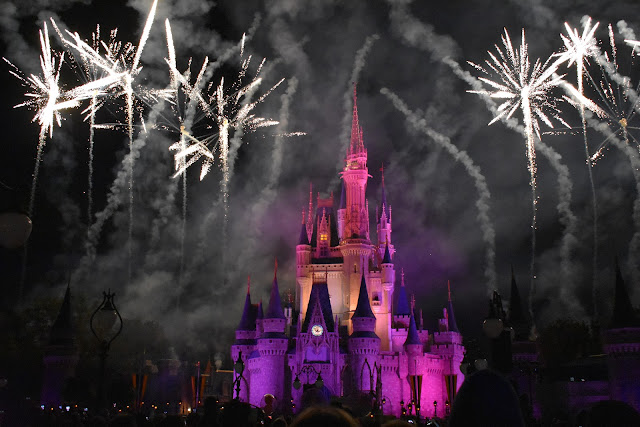 We left the park at 12:20 AM. I walked over 28,000 steps. To say we were tired would be an understatement. Disney is certainly expensive, but they do an amazing job living up to the fantasy of so many girls and boys of all ages.

We celebrated Christmas in the trailer. A first for Brian and Shannon.

It was a fun week with the three of them. We are so glad they made the trip to Orlando. It really made it all a very special time.

I was excited to continue our trip south. I was ready to leave the traffic of Orlando. Although the weather was perfect for our day at Disney, we were hoping for some warmer temps. We found them a few miles south. I will write about our continuing travels in Florida in my next entry.
Posted by ktmissouri at 11:34 AM