I am writing this entry from south Florida. It is warm and beautiful, just like it is supposed to be. High temps in the 70's and lows in the 50's for mid January is as close to perfect as you can get. I am catching up this week, so I am hoping to get a few entries done before we head to the Everglades for two weeks. We will have very limited cell phone and internet during that time. Let's go back about a month to early December...

We stayed at Bear Creek Campground from December 3 to December 9. We had about 450 miles to get to Orlando and we had 11 days. We were looking for a place that was about 1/3rd of the way. We considered a campground called East Bank that we stayed at and enjoyed last year. It is up on lake Seminole at the junction of Alabama, Georgia and Florida. That park was closed due to hurricane damage from Michael that hit the panhandle on October 10. I finally found a county park just west of Tallahassee on Lake Talquin called Coe Landing. I called ahead and they had space for us.

The best route was along I-10. We don't normally drive interstate highways, but there was not a better option. As we drove along, I started noticing wind damage along the highway. At this point I-10 is about 70 miles from the coast. We had heard that Michael was a monster, just a few MPH below Catagory 5 strength when it hit, but nothing could have prepared us for what we saw. The damage was extensive. This area is mostly pine forests. Most of them were mowed down like a giant weedeater had cut the trees off about 6 feet off the ground. I have seen this type of damage in a very limited area from a tornado, but this went on for over 50 miles. It was amazing and scary. 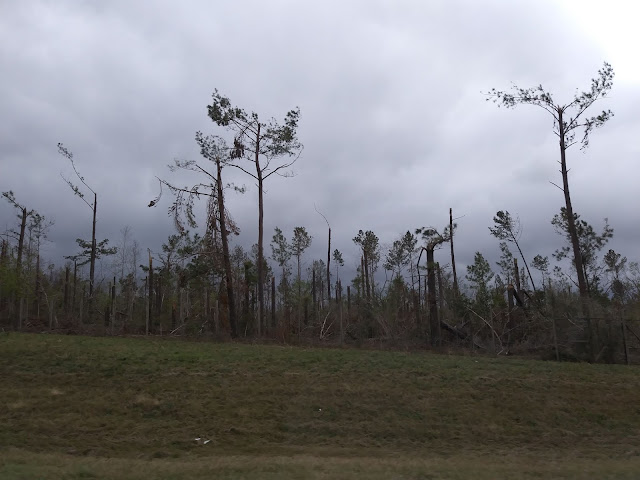 The thoughts of living in a sailboat and trying to dodge or survive one of these monsters is certainly something to consider.

We arrived a short time later at Coe Landing. The park is small, but pretty nice. It only has 20 sites, but most of them are along the lake with nice views. There was only one other site occupied. We selected site #7. 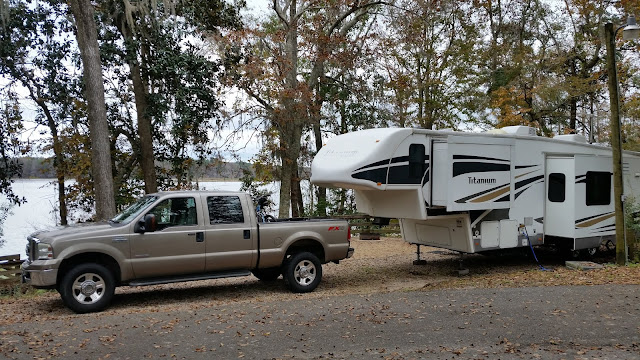 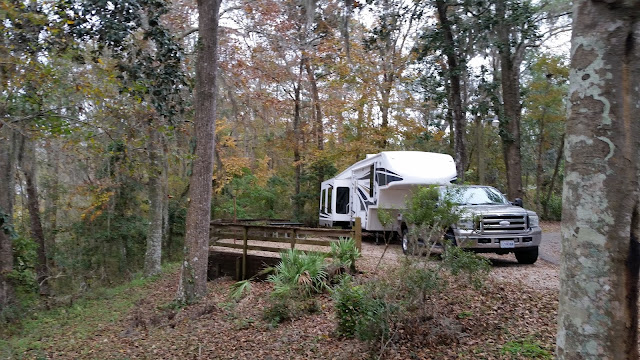 The park was very quiet. We did see a bit of storm damage, but not bad. It was only about a 10 mile drive to Tallahassee, so we loaded up the laundry and hit a local laundromat. Not exciting, but just part of our lifestyle.

It took about 20 minutes to walk around the entire park, but it still had some nice views. There was a dock just below our site that gave us nice views up and down the lake. 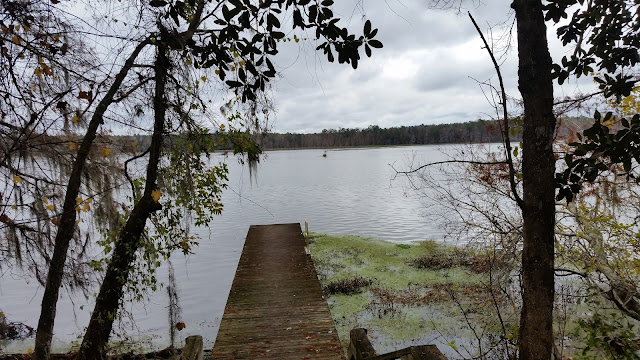 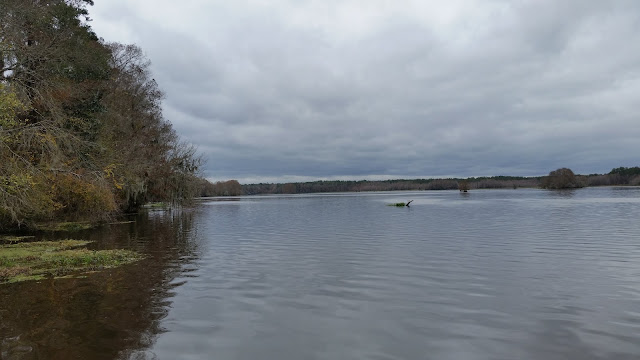 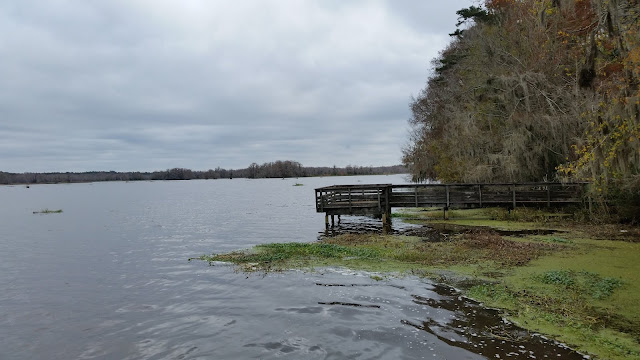 The second morning we were there is was dead still and the lake was beautiful. Of course, I was thinking about sitting in a boat, drinking my coffee, looking out over the water. 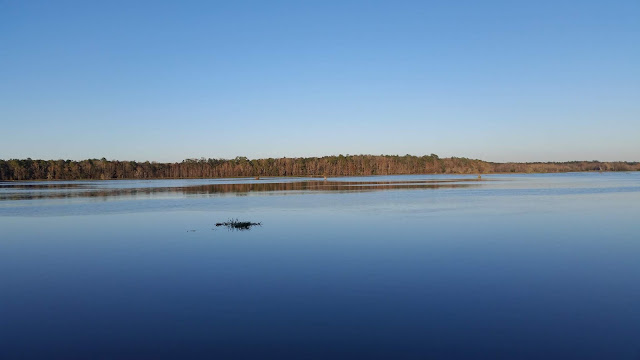 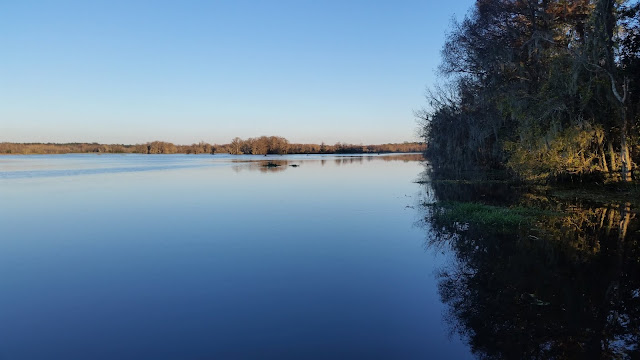 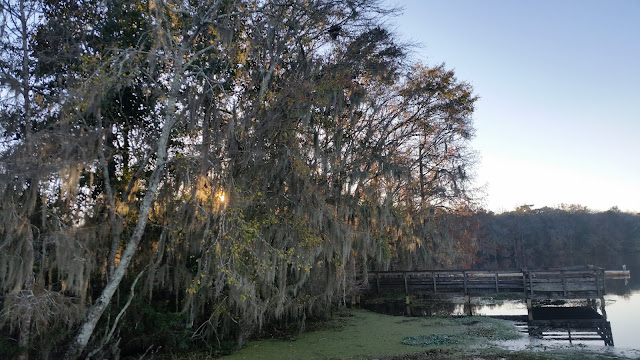 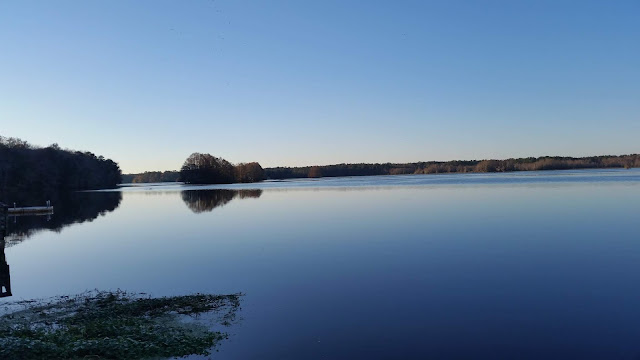 We only stayed three nights at Coe Landing, but we really liked it. It was a bit over $27 per night with W/E and had good Verizon and OTA TV. Not a bad stopping point at all.

We left Coe Landing on December 11th and drove about 145 miles to Hart Springs County park. This park sits along the Suwannee river. The springs is a recreation area with a swimming area. We had heard the springs were closed and that was confirmed when we arrived. The area had been taking some significant rainfall and many roads were under water.

The park looked nice and we moved into site #6 for the next week. We had a big problem getting set up. One of our landing gear on the front of the trailer had been making a strange noise. It completely failed right after I got the trailer off of the truck. Out came our trusty hydraulic jack and we got set up. 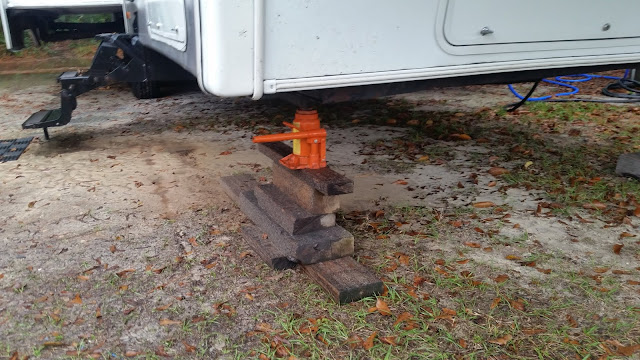 The story of this jack goes back to just after we bought this trailer almost 6 years ago. I have had it fixed once, replaced it once, fixed it myself twice and now was unable to fix it with the parts I had on hand. I really wanted to replace it with a brand new one anyway. I made a bunch of phone calls to find a replacement. Atwood, the maker of the jack no longer sells it, so I finally talked to a guy at Lippert that knew what to do. They sell a direct replacement and had them in stock. I talked to the park manager and was told they allow shipping direct to our site. I ordered the part and  needed two day shipping. The jack was $245 and the shipping was another $135. Now we had to wait with that jack holding up that corner of the trailer. We walked around very carefully for a few days.

Hart Springs park is very nice. These are full hook up sites. The surface is hard sand, which makes it's way inside at astonishing pace, but we really liked the vibe of this place. I went for daily walks and even played a bit of basketball on the very nice basketball court in the park. We did get one solid day of rain while we were there, but the park was not in danger of flooding.


I did not take many pictures while we were there. We just relaxed and waited for our new jack. It came after dark on the day it was scheduled to arrive. I could not wait, so I installed it that night and it has worked perfectly.  I have known since the last time I repaired that jack it was suspect, so that was always a concern when we arrived or left a site. I am much relieved now that it is good to go.

We had reservations at a county park in Orlando that is just a few miles from Universal Studios and Disney. Our Daughter, SIL and youngest granddaughter were meeting us there for a day at Disney and Christmas. Kim and I were very excited. I will write all about it in my next entry. Be ready for lots of pictures of princesses.