We got back to the marina after our trip to St. Petersburg on August 7. We relaxed for a day and then our boat neighbors asked us if we wanted to tag along with them on a little trip to their favorite anchorage. This trip would require us to do a number of things that we had never done before, so we quickly accepted the invitation and got ready to leave on Friday August 9.

The first order of business was a trip to a place called Bimini Bay. This is a very protected little bay just a few miles from the marina. Dave and Janice have a Gemini 105C Catamaran and they wanted to clean their hulls before they set out. In this area you should clean the hull about once a month to keep the buildup of growth to a minimum. If the growth gets bad enough, it will actually slow the boat down.

It was very shallow getting into the bay and required me to keep a sharp eye on the chartplotter. We made it by following their path and dropped anchor. We swam for a while and cleaned our hull also. At one point I looked over at Kim and a dolphin was about a foot behind her. She heard it, but did not see it. Swimming with dolphins is a very cool experience. It would be the first of many on this trip. Sadly no pictures.

We then motored up the Inter-coastal Waterway (ICW) for a few miles to the Anna Maria Island Bridge. It is a bascule (draw) bridge that is only 20 feet high when closed. We called them on the radio and requested an opening. I was a bit slow getting through the bridge, but it worked out fine. That was a big first for us. We then motored to the Cortez Bridge and did the same thing. Just a few miles later we were at the Longboat Key Pass. This is a very cool place. We motored in with Dave leading the way through shallow water and dropped the hook.

We were then invited to Dave and Janice's boat for sundowners. Sundowners are a boating tradition and just a good reason to have a drink and watch the sunset. We dropped the dingy and installed the outboard and headed over. Here is a shot of SHIFT sitting at anchor from D and J's boat "SloMotion".

We then decided to go to shore to a restaurant to eat dinner. Just as we sat down it started to pour down rain. OH NO! we had left our hatches open. The good news it did not last long. That was the first of many lessons we learned on this trip. We had a non-memorable dinner and went back to the boats. The next day I was up early. Having coffee in the cockpit is a beautiful way to start the day.


We had a nice breeze and we slept fairly well. It is still hot, but the breeze makes it much better.

Kim and I took a ride to the beach in the dingy. We walked around a bit and enjoyed the park along the beach.

We enjoyed the day at the beach and at a sandbar that got quite crowded on this Saturday. We made it back to the boat and then a big squall came in. Some wind and rain was just enough to run off most of the weekend boaters. We spent a second night and planned to go out the pass the next morning.

When we awoke, there were storms all around us. We waited and then decided to head further south on the ICW, rather than going out in the gulf. It is always nice to have that option. Just a few miles south was Sarasota bay. It is about 7 miles long and very wide and deep, so we got the sails ready and headed out. When we hit the bay, we had 10 knots of breeze. First we took a leg downwind and then had to make a turn and had the wind right on the beam. We sailed side by side down the bay. It was a blast. We each took shots of each others boat. It is really difficult to get shots of your own boat under sail.

We then dropped the sails and motored down to Venice, Florida. We opened three more bridges along the way, but that is easy now. We looked for a place to anchor, but decided to stay in a marina. It was not a great experience. We had problems with the dock power and we had to move our boats after we were all tied up. Thankfully with 4 of us, we got it done. The marina was overpriced at $105.00 for the night and we rolled with the incoming swell all night. We won't be back to Crow's Nest Marina. I fixed dinner for all of us and then finished the key lime pie from my birthday.

The next morning we were on the move early. We went out the inlet and sailed down the coast. We had a great sail for the first 4 hours. We had 5 to 10 knots and the swell was not too bad. Then we got hit by a storm that caught us from behind. We reefed the sails and watched the wind climb to 18 knots. The sea state went from comfortable to wild. We had waves and swell over 6 feet high. The good news is the boat handled it in stride and I never was concerned about our safety. We sailed in through Boca Grande Inlet. The tide was coming out and the wind was stacking up the waves. We turned on the motors and were barely moving. It took forever to make it through the pass.

We rounded the corner to starboard and got our first look at Pelican Bay. It is a beautiful place and we had it all to ourselves. SloMotion got in and dropped anchor. It was then that I made a mistake. I was looking at the chart and saw very shallow water, but failed to turn quickly enough to avoid it. The next thing I knew we stopped moving. We were AGROUND!

I thought back to all I had read on the subject and got to work. I dropped the dingy and carried out an anchor to deeper water. I carry two anchors on the bow of the boat and one for the stern. I put that anchor rode on one of my big sheet winches and pulled it tight. The boat did not move, but it was low tide and we would just wait. We got the boat put to bed and had dinner. This was our view from our boat that for the first time was not moving. 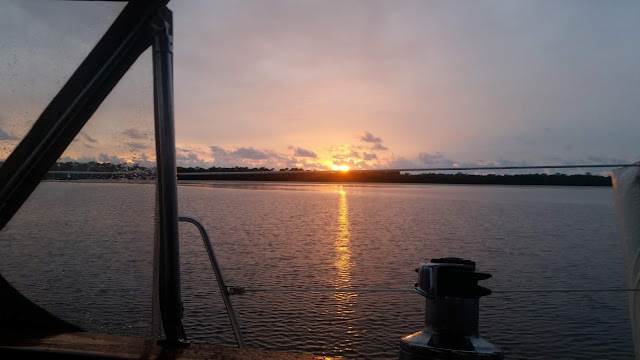 I got out and walked around in the shallow water. Our draft is 4.5 feet, and that is about exactly how deep the water was. I determined where the deeper water was and waited until 11PM. I pulled on the winch and the boat began to move. Then sadly it got stuck again! I took the anchor out again and went through the whole process again. This time with some help from the motor, she got free and we made it to deeper water and dropped the main anchor. That was a huge relief. We finally fell into bed at 1AM, exhausted but happy to be rocking a little bit.

That is enough for this entry. Dave and Janice left us the next morning to head back to civilization. It was just Kim and I to figure out how to get back to the marina. Would we make it? I will tell the rest of the story in my next entry.
Posted by ktmissouri at 12:47 PM