It has been over two weeks since I have written in this blog. We have been very busy in a typical boating kind of way. I am not sure exactly what that means, but to us it makes sense. I have a lot to write about, and hope to get a couple of entries done in the next few days and maybe even another video.  For now, we will go back about two weeks.

We spent the month of July working on the boat and doing mostly day sails out into Tampa Bay. There are some nice places around the bay to anchor the boat, and enjoy the water. During the week, it is fairly peaceful, but on the weekends the activity level increases by a factor of 100. Here is a shot of a favorite anchorage called Passage Key on a sunny Saturday:


The water is beautiful and clear. To the right of this picture is the passage out to the gulf. It is very shallow close to the island, so unlike the power boats that can tilt their motors and go right up to the shore, we have to anchor off about 200 yards off and swim and snorkel around the boat in 6 to 10 feet of water.

We have had these regular visitors to the boat. It seems these two doves like to sit on the grill in the cover of the bimini. We usually ask them to leave to save our grill cover from the droppings.

We have been thinking about going somewhere to gain experience in unfamiliar water for a while and it seemed like my 60th birthday was the day to do that. We made reservations at the Municipal Marina in St. Petersburg, which is about 20 nm across the bay.

We set off about 10 in the morning and had decent wind, so we put up the sails. We even had a visitor to the bow rail. 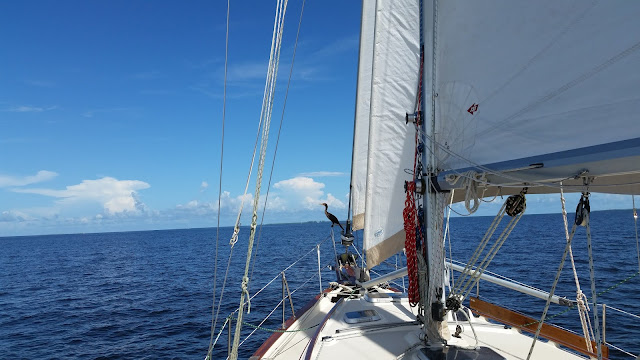 Just as we got close to the Skyway Bridge the wind died and we brought the sails down and motored through. There was a large ship coming the other way, but there is plenty of room for both. Here are a few pictures of the first time we went under the famous bridge. 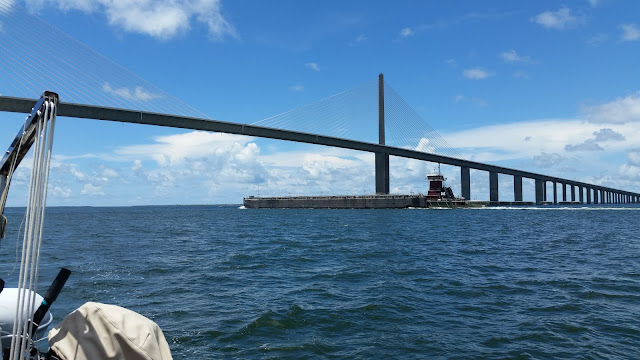 Those large ships move much faster than we do, so you have to be careful when you are in the shipping channel. The good news we can see them on our AIS and it even tells me their speed and heading. This guy was moving at 12 knots, so we had a closing speed of about 18 knots.

Just after we got clear of the bridge, the wind picked up and we sailed on just the genoa over to St. Petersburg.

We made it into the marina basin without trouble. As we approached the dock the promised line catcher was not there. I aborted by first attempt due to a bad angle and did a quick spin around and made a better approach the second time. Some local gentlemen came over to catch a line and we were thankful for that. Kim offered them a shot of rum and one accepted. This was the first time we had done a side tie and with the long bowsprit I was concerned about hitting it on a piling.

The docks were not in great shape and it seemed a bit run down for about $96 per night. I gave them a less than great review on the online dock reservation system called "Dock Wa". The cool thing, they apologized and gave me a $26 credit.

We got cleaned up and took a walk into the city. It is a very cool place with lots of hotels, restaurants and other businesses. We had dinner at 400 Beach, that was good, but expensive for my birthday. We then took a walk along the water and through some nice parks. 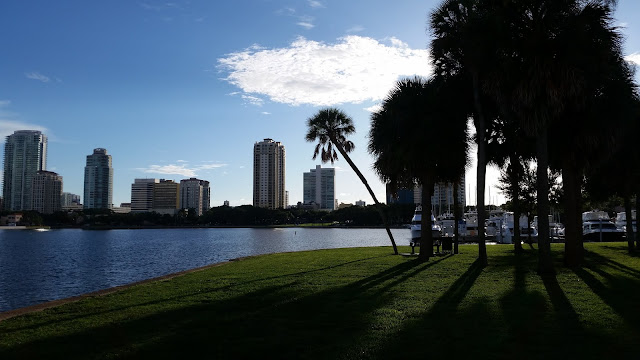 We then got on the free trolley. It winds all through downtown and the driver gave us a nice history lesson. We had a blast and the A/C was nice and cold. We got off and went to the Publix grocery store and bought a key lime pie and went back to the boat. It was a great birthday and one I will remember for a long time.

We headed out about 10 the next morning to try to get back to our marina before some forcasted afternoon thunderstorms. After getting out in the bay, we had 10-15 knots of wind and we had full sails up. We were able to stay on one tack the entire way to the mouth of the Manatee river. We were flying at 6-8 knots. It was our best sail yet and a great way to end this first trip to somewhere.

I have been dreaming of traveling on a boat for a long time. This was the first time I have ever set out for a destination that was not on an inland lake. We now feel we are ready for the next step. Come back for my next entry, and I will write all about that. I will tell you now, the trip was not without problems.
Posted by ktmissouri at 9:03 AM