After a very relaxed day at Indian River Pass, we prepared the boat for sailing the following day. We awoke early to some building swell out of the Southwest. This was the angle that we had the least protection. This caused the boat to rock up and down like a "hobby horse". We left Indian River Pass on November 24, 2019.

We had a forecast of some storms building from the Southwest, but to start the day we had great sailing conditions. 10 knots from the south. We were heading 35 miles to the East Southeast. We were cruising along at 5-6 knots.

I did a video update as we left the Indian River anchorage. Kim also got a cool video of a dolphin on the bow.

Click on this link to view video: Update from Sail to Little Shark River

We sailed along for a couple of hours in the great conditions. We then started to see some menacing dark clouds to our southwest. After a while it was clear that they were moving faster than we were and they would soon be upon us. We heard Coast Guard reports on the radio that warned of 18 knot winds with the passing squalls. We decided to be cautious and furled the Genoa and sailed with just a full main and staysail. The squall hit and the wind jumped to 19 knots and the boat healed over a bit more, but still very stable. I sailed along at over 7 knots adjusting with each gust down wind. We were over 3 miles offshore, so we had plenty of sea room to run downwind with the southerly gusts. We were only in about 9 feet of water, but that is the norm for the area along this coast of Florida. We got some rain, but not too bad. It was all over in about 45 minutes and we were left with light winds.

This squall was the first we have faced under sail. It was not a bad one, but we did what we should have done and all went well. I am proud of our progress. This boat is awesome. I am loving SHIFT more and more every day. She takes great care of us.

We sailed on to the mouth of the Little Shark River and motored into the channel. We found a great place to anchor in about 10 feet of water. We had cool breezy conditions and the best part, no bugs!
I got the fishing pole out and caught the largest catfish I have caught, but still nothing to eat. 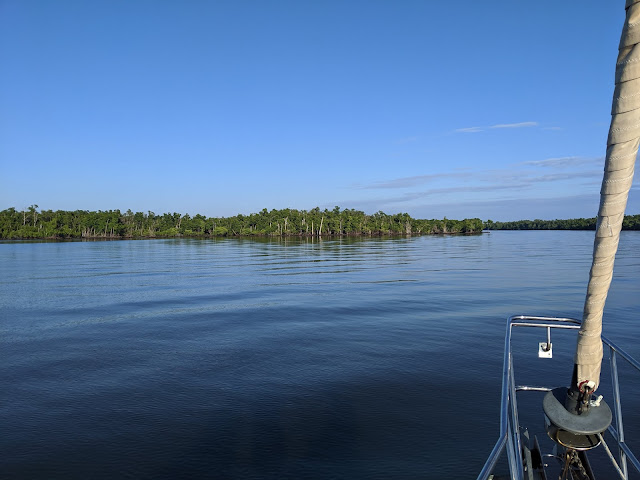 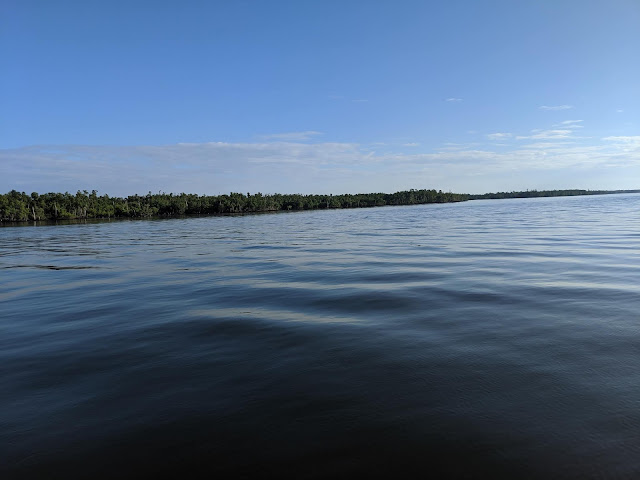 There were lots of wading birds on the shores around us. Not great shots, but this should help us remember the beautiful place we had all to ourselves.

We had no cellular connection, so we were going off of a weather forecast I had downloaded the day before. They were calling for some 20 knot winds overnight out of the Northwest. This picture shows our protection coming from that direction: 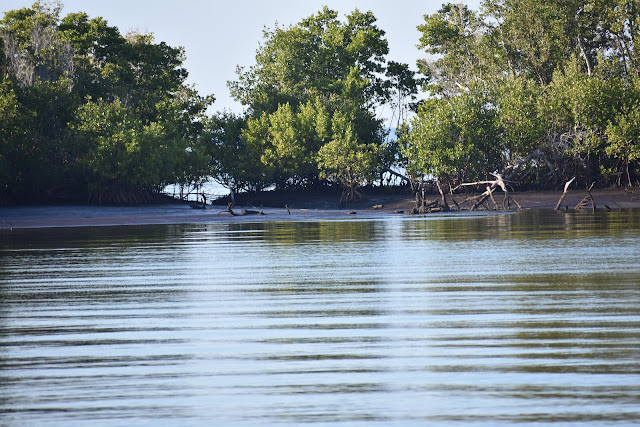 The wind was calm at sunset, but began to build shortly thereafter. We were very comfortable, but very glad we were tucked into this protected spot. The winds built to over 25 knots. We felt the breeze rushing through the rigging, but no swell. We set the anchor alarm and slept well.

We decided that we would make the final push to Marathon in the keys the following day. In my next entry, I will tell the story of our 45 mile crossing of Florida Bay. This would be the farthest we have ever been from land.
Posted by ktmissouri at 9:39 AM