We arrived in Carrabelle, Florida on March 2nd after a 28 hour passage from Tarpon Springs. We decided during the trip that it made good sense to stay at a marina. We had considered dropping the hook behind the barrier islands just off the mainland, but we were all tired and the weather for the coming days did not look good with a cold front coming in. We chose The Moorings Marina. They had a daily rate of $1.50 per foot or if you stay 5, you get two nights free. We decided that we would stay the 7. The weather was looking good for that time frame. The one great thing about this marina is that it is also a hotel and they offer a free hot breakfast with the slip rental. We really enjoyed our hot breakfast each morning.

This is a quiet time for boating activity along this coast, so it was just us and a few other boats and a few hotel guests at breakfast. The marina is well protected from wakes, but the docks are in rough shape, still recovering from damage caused by hurricane Michael, 18 months ago.

The town of Carrabelle sits on the Crooked River and is well protected from the open gulf by Dog Island. The river creates one of the best deep water ports along the Florida Panhandle. Although the weather was cooler than we had been experiencing further south in Florida, it was still quite pleasant most of the time. We did not have transportation, so we walked everywhere we went. A grocery store and laundromat was a short walk away, so we made frequent walks all over town.

The first night, we had dinner at the "Fisherman's Wife". I would say it was good, but not great. The second night we had our own fish fry and ate some of the Greater Amberjack, that Byron had caught during the passage. I bought some shrimp at the local seafood market and that meal was great!

Carrabelle has three museums that celebrate the local history. We decided to walk the 2 miles up the road to the Camp Gordon Johnston museum. That is where many troops were trained in amphibious landings during World War 2. There was a good history of the camp and many personal memorabilia collections that have been donated by local veterans of WW2.

We arrived just a bit before the museum opened for the day, so we went to visit the beach that was used for the landing practice.


While we were at the Johnston museum, we met Dennis. He was also visiting the area and offered to give us a ride to the Crooked Rover Lighthouse and then back to our marina. We gladly accepted.

The following day, we went to the historical museum in downtown Carrabelle. We were lucky to get a personal tour by the curator of the museum. She told us many stories of the founding and development of Carrabelle. The town has declined from the high point in the 1920's, but it still is a cool little town.

Carrabelle is known to have the smallest Police Station in the world. Here is a picture of the one on the street now: 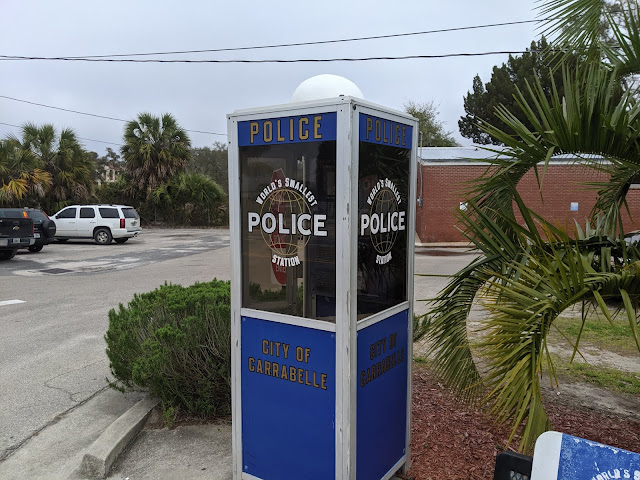 We really enjoyed our time in Carrabelle. We needed the rest and this place was the perfect place to do that, but now it was time to move along. We had a good weather window approaching and we were ready to sail west. We had a plan to make it to Pensacola in two days, which was almost 200 miles away. Come back to see how that passage went.
Posted by ktmissouri at 3:54 PM