I am writing this entry while being stuck on the boat at Turner's Marina in Mobile, Alabama. We have been staying in the boat and limiting our social interaction with others as much as possible. We are planning to leave here tomorrow and head up the waterways to Demopolis, AL. This move is needed to get the boat to it's home port for the next 6 months or longer. We estimate that the 200+ mile trip up the waterway will take us about 7 days. We expect to be isolated that entire time. We will have our buddy boat along, but our days will be filled with motoring along at about 5 knots depending on current. We will be anchoring out each night. We are feeling well and are praying in the next week things make a major turn for the better, but will be keeping close tabs on the virus situation. It has amazed us how fast this has all changed our lives. Now back to the blog entry from March 10.

We awoke on March 10 to a calm anchorage just west of Port St. Joe, Florida. We had good protection from the Gulf of Mexico swell because of St. Joseph Peninsula. We did not need to get going quickly, because we had a 24 hour sail if we averaged 5 knots. As always, we did not want to get to the pass at Pensacola in the dark. The weather forecast was for light winds in the morning and then no wind through mid day and then building to 10 knots out of the south overnight.

Byron and I have a hard time waiting around, so we got moving by about 8 am. For the first couple of hours we sailed in a light breeze on smooth water in the lee of St. Joseph Peninsula. It was a very pleasant way to start the trip. When we planned this trip, we looked at doing day sails to Panama City and then Destin and then Pensacola, but the inlet at Destin has a bad reputation and it was shorter to just go straight across. At the end of the trip, we were happy with our decision. We would only be about 20 miles off shore at the furthest point.

We spent much of the day sailing. Then we would have to turn the motors on for a while. Back and forth. As we made it to open water the swell from the south became noticeable. It stayed with us the entire trip. It built to be 4 to 6 feet at times, but with a long period or gap, which made it fairly comfortable. The problem was that it was hitting us on the beam. When we had some wind and drive forward, it was a more comfortable ride.

I shot some video of Serendipity in the large swell, you can see it better with a boat in the frame. At times the entire hull of the boat would disappear behind the moving walls of water. I will publish that video in the coming days.

We periodically saw fighter jets overhead. They were flying out of Eglin AFB or Pensacola NAS. At one point we saw a group of 4 F-35's come over low. One of the planes broke formation and came down very low and waged his wings at us. That was more than cool!

We had a beautiful sunset followed by the best moonrise I have ever seen. The pictures just do not do it justice. 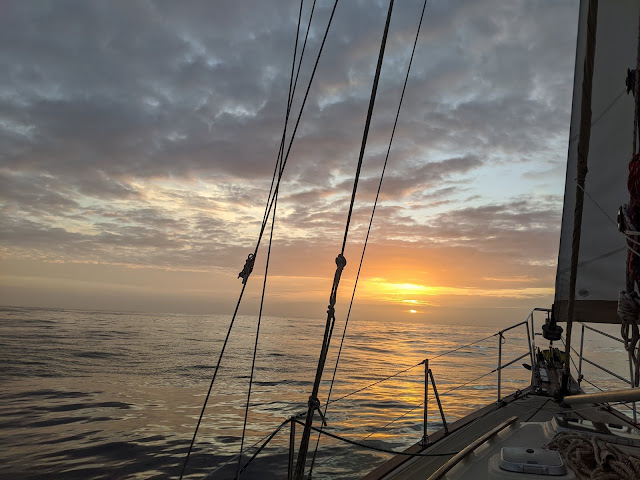 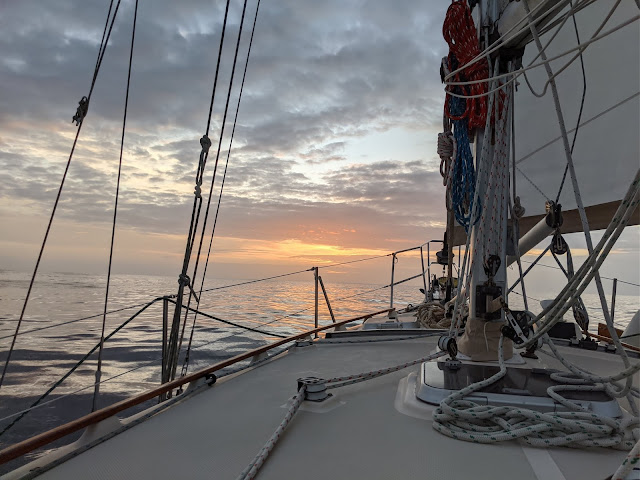 The wind picked up as predicted and we were able to turn the motors off for about 8 hours overnight. The swell never left, but the sail was still very pleasant.

We arrived at the Pensacola inlet right as the sun was coming up. We turned into the channel and immediately noticed a strong current running against us. I had checked the tides and it should have been an inbound current. Once again the heavy rains up north had created swollen rivers and that was overrunning the tidal current. We plodded along at about 3.5 knots for about an hour to make it to the ICW. That was the toughest part of the trip. I was tired and ready to go to bed and we were making very slow progress. The good news is that our anchorage was just after we joined the ICW at Spanish Point.

As we put our anchors down there was almost no wind and we had great protection. We were right off the end of the runway at Pensacola Naval Air Station, Home of the Blue Angels. We did not get to see any Blue Angels, but had many fighter jets flying over. 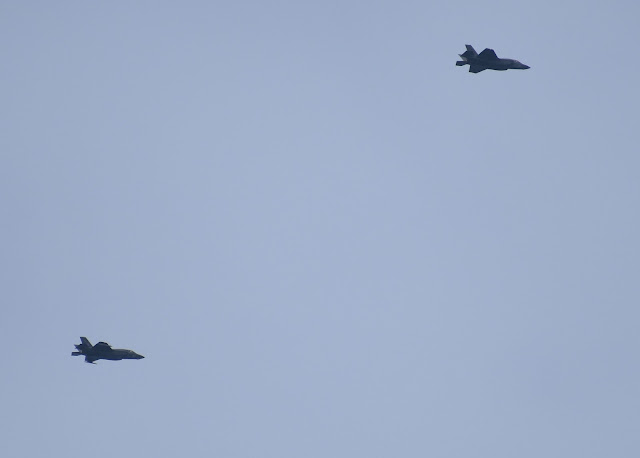 That made our 4th overnight passage on this trip. I am not going to say we enjoy them. They are long and we both get tired, but they are getting easier and I am much less apprehensive about doing it. Sometimes it just is the best way to go in a sailboat. It just takes too much time to go in and back out of an inlet. You are going so slow, time is the most important factor to make miles. With a good auto-pilot, you can just set the boat and leave it alone for long periods of time. You do have to keep watch to make sure other boats aren't around, or if conditions change, but it is hours and hours of very relaxed time.

Kim was able to sleep quite a bit on this trip. I was only able to get a couple of hours, but after we arrived, I quickly went to bed and slept for about 4 hours. We were happy to be in Pensacola. That marked the end of the big sails on this trip. Come back to see where we went from there.

Posted by ktmissouri at 3:22 PM