Time with Family and Friends in Gulf Shores, Alabama

I am taking the time during our self imposed quarantine to get caught up on the blog.

We arrived in Gulf Shores on March 12th. We had a very nice slip in Homeport Marina, but things would get strange while we were there. We made plans with our good friends Bill, Lisa, Bob and Rox. We have known these folks since 2015 and have tried to catch up with them each year we have been traveling. We decided to meet at the boat and have a bit of a private happy hour. We had a great time catching up and learning about everyone's plans for the coming year. We then went over to a very busy, LuLu's Restaurant for dinner. It was a great evening, but I did not get any pictures of the group this year.

Our daughter, Shannon, Husband Brian and daughters Hannah, Eve and Amelia arrived on Saturday, March 14th. They had rented a condo just off the beach for two days. They had planned to leave for a cruise out of Mobile, after that, but the cruise was now cancelled and things were quickly changing. We decided to join them at the condo for a couple of nights. Those were the first two days we have not slept on the boat since October of last year. It felt strange having a bed that did not move. Shannon came to pick us up and we joined the entire group at the beach.

It was a very warm, sunny day, but the water was a bit cool, but the Missourians enjoyed some swimming. We then went back to the condo and enjoyed their nice pool and hot tub until the "no-see-ums" ran us inside. We spent the evening reading the latest news on the phone. It seems that every 5 minutes someone would announce to the group another shocking closing or cancellation. It was getting more and more unreal by the minute. We decided to go out for dinner, but made sure to sit outside away from the crowd. That turned out to be our last crowd gathering.

We went to the beach the next day and evening. There were no crowds where we were, so I now think we were pretty safe.

After two nights in the condo, we went to the boat. It was a nice day, so we decided to take it out for a short trip. As it turned out we had a bit of wind when we got to Mobile Bay and we put up the sails and cruised around under wind power for a couple of hours. The whole crew did great and we really enjoyed having them on board.

It was a fun day and great to see some family. We had planned to have dinner and LuLu's but found they were now closed, so we ordered some Zaxby's take out and had dinner on the boat. The entire crew slept on the boat and then headed home the next day. We really miss everybody and now know we are going to have to wait a while longer before it is safe to be close to everyone. This virus really stinks!

After spending a week in Homeport Marina, we sailed across the bay to Dog River, to meet back up with our traveling partners, Byron and Mary. We went to Turners marina, which was not near as nice, but was also about half the price as Homeport. 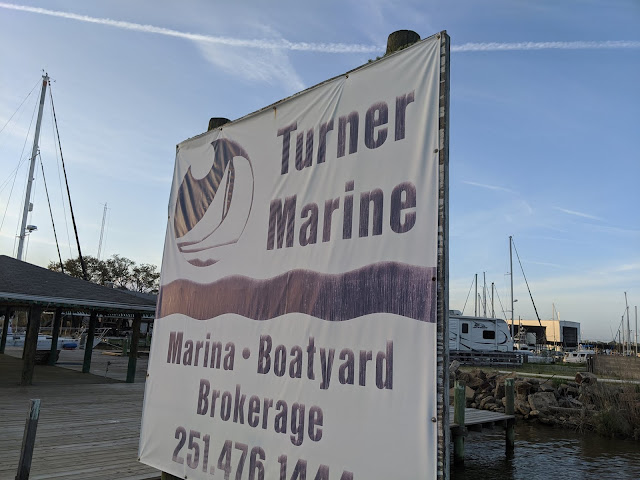 We met a number of other travelers including Steve, who was in the process of transporting his Island Packet SP Cruiser back home to Chattanooga, TN. We watched as the yard unstepped (removed) his mast.

We spent 4 nights at Turners to get final preparations made to head up the river. In my next entry, we will begin that 200+ mile trip.
Posted by ktmissouri at 1:19 PM