After 4 days at "Old Lock 1" we were discussing our next move. Byron, on Serendipity, was thinking it was time to move along. I was thinking we needed to wait a bit longer and hope the current would slow down making it easier for us to get up the river. We were watching the hydrology reports along the river and were guessing that the current would reduce along with the lower water that was expected in about 3 more days. Kim was concerned about the water level in our current anchorage. When we came in, we only had 11 feet at the bar at the mouth of the creek. If the water dropped too much, we could get stuck in here until the next flood. It was a difficult decision, but we decided to go the next day.

We had about 16 miles to get to the Coffeeville Lock and Dam. We started out early and easily cleared the bar. When we hit the river we had a strong opposing current. We once again slogged along at about 4 knots. I was moving from side to side in the river looking for reduced current on the inside of the corners. I was able to find almost no current right along the bank in the eddy caused by the apex of the curve. I was concerned about hitting a log, but most of the time we were in more than 20 feet of water.

When we arrived at the Coffeeville, we were able to get in the slack water leading up to the dam. It felt great moving along with no current. Byron called ahead and the lock was ready for us. We easily pulled into the lock and got tied up. There was no current or wind. We tied off to floating bollards and just waited for the signal when we could untie and leave. Our first lock was a breeze.

We motored up the next 2 miles to the only gas stop on this part of the river, a place called Bobby's Fish Camp. The dock was in the strong current. We got in and tied up to the sketchy dock. The restaurant is closed, but we were able to call the number on the door and Bobby's daughter came down to turn on the fuel pump. I spent a while talking to her (I did not catch her name). Bobby passed away a few years ago and she has tried to keep the place open. She recently made the tough decision to close the restaurant and just keep the store and dock open. We could have stayed there for the night, but with the strong current, we decided to go about 6 more miles to Okatuppa Creek. We pulled in to a beautiful little creek. There were tall trees and we had to be careful to give clearance for the mast, but it was a great place to anchor. We set our main anchor and a stern anchor to keep us clear of the middle of the creek. We did see a number of fishing boats go by while we were there.


We had a very calm night. The next day, Byron and I discussed our options. The river was continuing to drop and I was hoping for significantly reduced current in the coming days. There were strong storms predicted for the next day, so Byron decided to move along. We stayed an additional night.

We had an interesting time after Byron left. We had some locals walk up to the bank along side of the boat to talk. They were very nice and we had an enjoyable conversation. They were also boaters and were very surprised to see a sailboat as big as ours in this little creek. I also did some work on the motor, but that did not have much effect.

We awoke the following day to some strong wind. It pulled loose our stern anchor and caused us to turn sideways in the creek. Kim suggested it was time to leave, so we got ready and hit the river. The current was a bit reduced, but still much stronger than I would like. We got a bit of wind and rain, but we continued on. It was at that point that we decided to try to make Demopolis in two days. We caught up to Byron because they waited out the storm and then when we made contact and found we were not far, so they waited for us. The problem was that there were no good anchorages in this part of the river. We checked out a couple, but decided to keep moving. As night approached, Byron found a small creek and went in and tied off to two trees. We dropped our forward anchor and eased out chain and came along side and rafted up to him. We had a pleasant night other than a few wakes from the Tows.


I once again worked on the motor and I am fairly sure I cleared a partial blockage in the seawater cooling line. The following day the motor did run slightly cooler and the steam was mostly gone.

We woke early on April 1, but when I tried to start the engine, I had no power at all. The batteries were charged, so it came down to a lack of power to the ignition switch. I used a jumper cable to power the ignition and the engine started. I had no accessories and no power to my gauges or my voltage regulator. We decided that the solar would power the instruments, so we started up the river. About a half hour later all of the power came back! What the heck! The systems on the boat ran fine the rest of the day.

It was a fairly uneventful day. I was concerned about the motor, but it ran fine and only used about a half quart of oil. 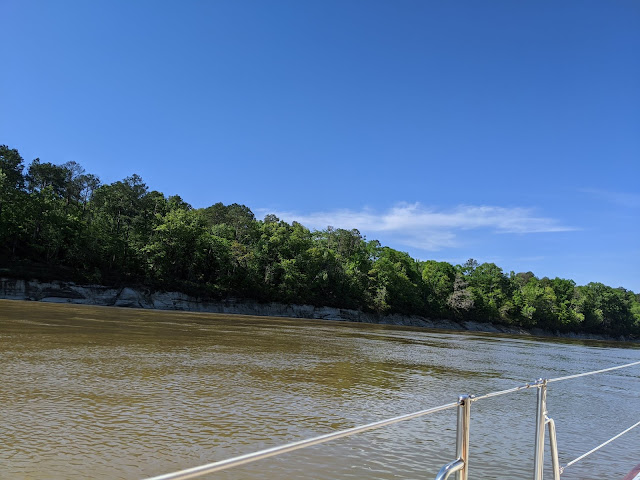 As we approached the Demopolis Lock, we saw this one would be very different. There was strong wind and current as we came into the channel. We were lucky again that we did not have to wait, but the winds swirled around and we both had to do some piloting to get tied up to the bollards. Much of the wind and current were gone when we exited the lock on the top side.


My excitement built as we exited the lock and headed to the marina. We had been traveling for exactly 6 months to the day. We had been so many places and met so many great people. I was happy to be done mainly because of the engine concerns, but also because I felt a bit tired and was ready to just relax.

It was at this point we were not sure what to do. The fears of the virus were growing daily. We wanted to get back to Missouri to see the kids and grand kids, but did not know if that was the right plan. I will talk about our next moves and life in Kingfisher Bay Marina in my next entry.
Posted by ktmissouri at 9:37 AM