After our first week in the Gulfport Marina, we settled in to life along the northern gulf coast. We knew it was going to be cooler than we wanted, but we were surprised how cold the next few weeks were. We had a number of low pressure systems come in from the north and bring a stiff north wind and temps dropping into the 30's F at night. That helped us get into the Christmas spirit. One thing we were looking forward to seeing while we were in Gulfport was the awesome Christmas lights display that is set up in the city park next to the marina. Kim loves Christmas lights and the Christmas season in general.

In my last entry, I wrote about all of the damage in the Gulfport area from Hurricane Zeta. We were very concerned that the city would not be doing the display this year. Much to our delight, even though the storm came when they were well underway setting up the display, they were able to salvage about half of the display and had it lit up each night throughout the month of December. Kim and I got bundled up a number of nights and walked around the loop in the park. 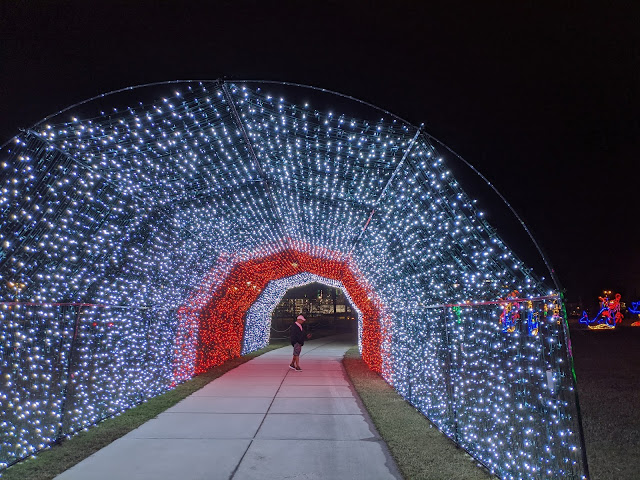 Kim decided that we had to have a Christmas display of our own. It was cool to see a few boats in the marina had lights on.

In my last entry I showed some pictures of two boats that had met their demise in Zeta. One day a dump truck and this loader showed up and hauled them away. 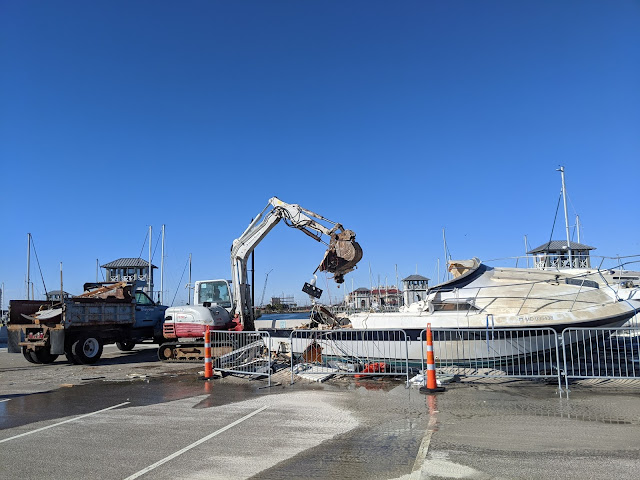 We took a trip over to Gulf Shores to visit some good friends that were in town. We had an enjoyable visit and then made plans to have them aboard SHIFT for a day of sailing. I was watching the weather and finally found a day that would be a bit cool, but had decent wind and sunshine. December 9th was the day to do some sailing. It is kind of hard to capture much of a sailing trip from inside the boat, but here is a few pictures of our crew for the day.


Before we left the dock one of our neighbors was getting ready to go. Wayne is 72 and singlehands this 42 foot Catalina. I sent him a series of shots I took. He was happy to have them. They were the first shots he had of his boat under sail.
The rest of the month was spent walking around the marina and the surrounding beaches. Some days are cool and blustery and some are nice. We wanted to experience this part of the coast in the winter to see how it was for living aboard. So far so good.

We have some Military aircraft that fly out of the airport just north of the coast. I am not sure if they are Mississippi Air National Guard or some other unit.
That is about it for this entry. We left Gulfport on December 22 and drove to Arkansas and Missouri to spend time with family for Christmas. I will write about that trip in my next entry.

Posted by ktmissouri at 2:39 PM