On June 16, we decided to head up to Bowman Lake, which is on the west side of Glacier. It was only about 20 miles north from where we were camped. We got a fairly early start because we were on a mission. We had heard about a little Mercantile Store in the village of Polebridge that sold fresh baked items including Huckleberry Bear Claws and Cinnamon Rolls. That would be breakfast. 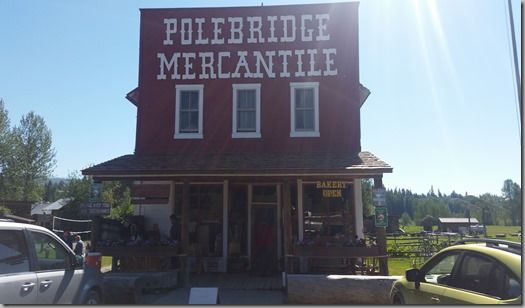 I would have to say that the baked items were good, but not great and a bit pricey. It was a cool store and it was worth stopping. We then headed into the park. There is a manned entrance station just outside of Polebridge. We then drove the 6 mile very windy narrow road to Bowman lake. It was a beautiful day and the water and scenery was gorgeous. 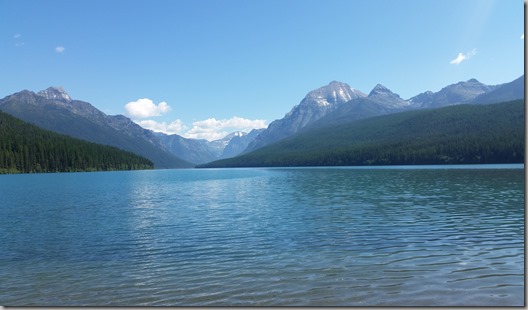 You can fish in Glacier National park without a license, so I brought along my ultralight spin casting rod. I will get into the fishing stories later. The good news is we were not shut out.

Kim went off to do something and she took this picture of me paddling solo. 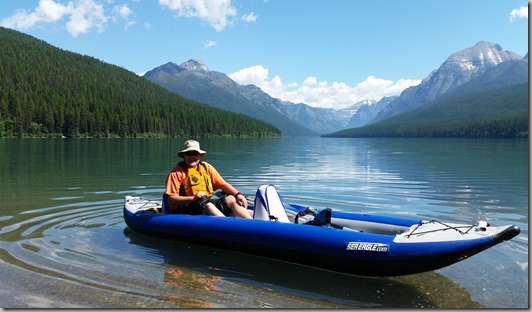 There was another couple that was paddle boarding. They headed to the far end of the lake. We just cruised along and I fished. I hooked one nice trout, but as soon as I got a look at him, he got off the hook and my shutout continued. As we moved down the lake, the mountains just got more impressive. 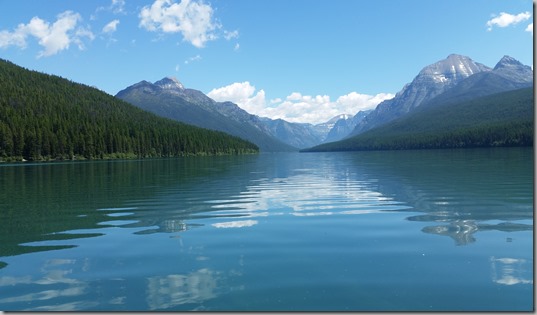 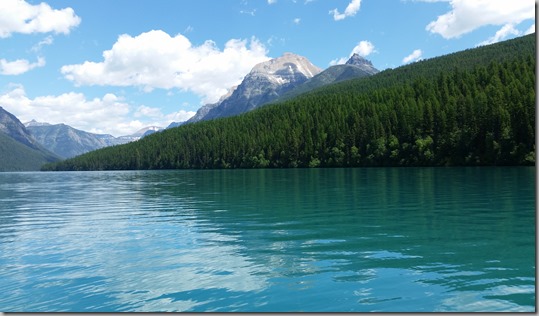 As things happen, we got to the far end of the lake and the wind came up. We crossed over to the other side to get more wind protection and started working our way back up the lake. At one point we found a nice quiet cove to rest and Kim asked to use my fishing pole. Kim is a good fisherman, but rarely fishes other than helping the grand kids. On her fourth cast. I look at her pole and it is bent over. I ask if she is snagged and she says no, I caught a fish. Here is the evidence of the 12-14 inch lake trout. 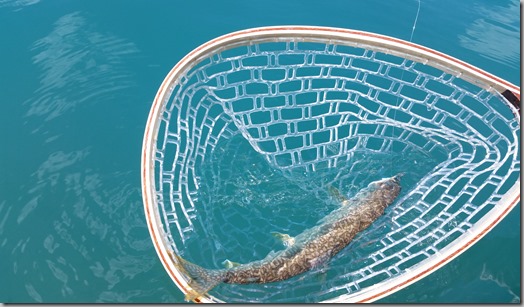 We let it go, even though the park would rather you keep the non-native species of fish.

I guess Kim is the fisherman in the family. It will take a long time for me to live this one down – probably never. Oh well, she was excited and I was happy for her.

We paddled along the shore and stopped to talk to a young couple that had been hiking along the lake. They were newlyweds and were hiking Glacier as part of their honeymoon. They were really nice kids. They asked us our secret to 35 years of marriage. We just told them that you have to have the mind set that giving up is not an option. I do believe that unless there is abuse or some other unforgivable issue.

We had lunch on the shore of the lake while we packed and dried the boat. A few more people were there at that time and some were heading out to enjoy the lake. We loved our paddle on Bowman lake. It will be a highlight of the entire trip.

We were thinking that we would move on from Glacier the next day and I really wanted to make one more trip up the Going to the Sun road. We drove back to the unmanned Camas Creek entrance and through Apgar village and headed up the road. It was a beautiful day and we got some great pictures. 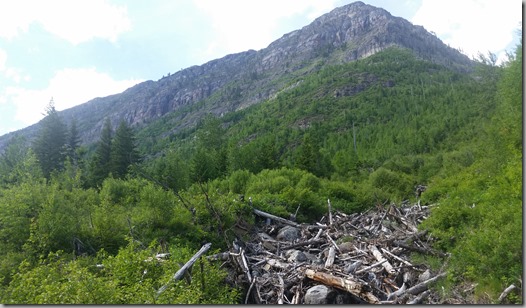 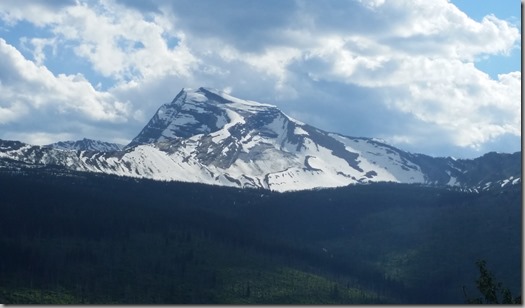 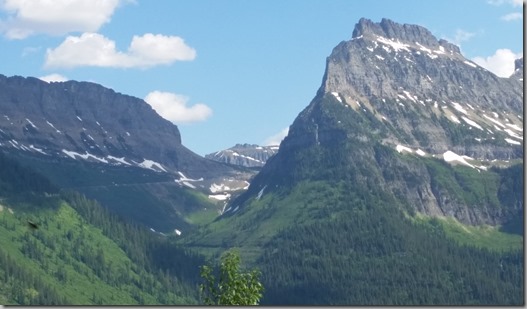 That is a sheer drop-off of about 500 feet. The red bus is one of the famous Glacier tour busses. 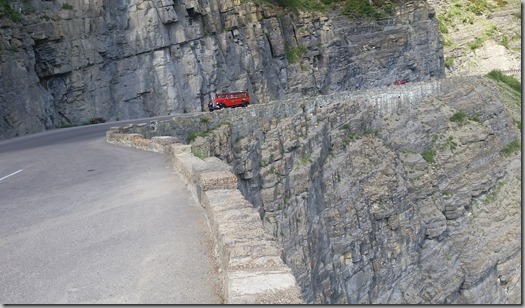 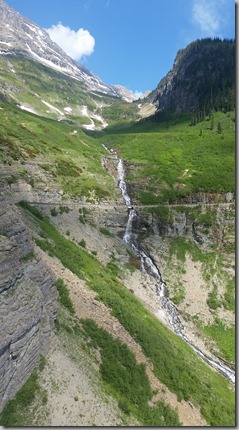 The waterfalls are amazing. Bird woman falls is 492 feet tall. 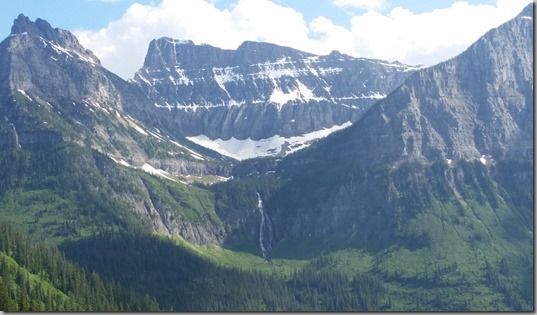 We saw a few more mangy goats, but that was all of the larger wildlife we saw on this trip up the road. 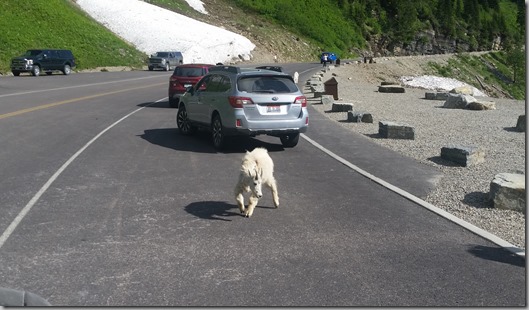 My favorite shot of this drive: 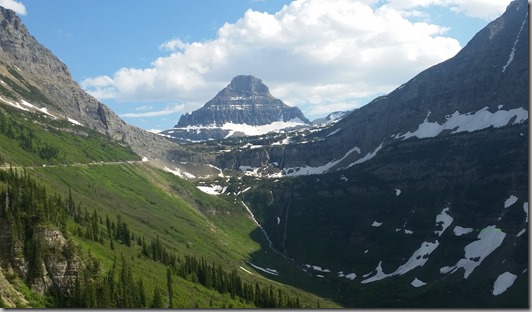 It was late in the day on a Monday. There were much less people on the road than we saw the last time we drove up on a Saturday.

Views from the top of Logan pass. 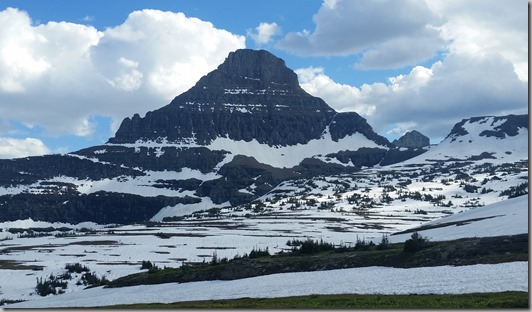 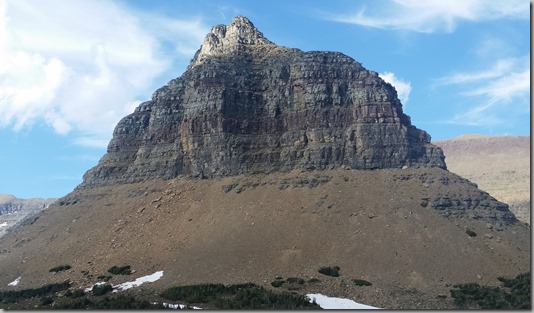 Much to my surprise, Kim wanted to take a hike up the snow fields to Hidden Lake. The problem is she was not prepared. She only had sandals, so she put on some thick socks and started up the trail. I followed her to make sure she was safe, but I had no intention of hiking all the way up those snow fields with my bad back. 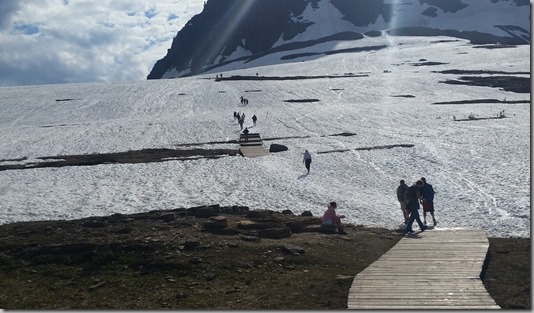 She made it up to the top of this pitch and stopped to rest. I went on up and tried to convince her to stop. She reluctantly agreed. The views from up there were very impressive. 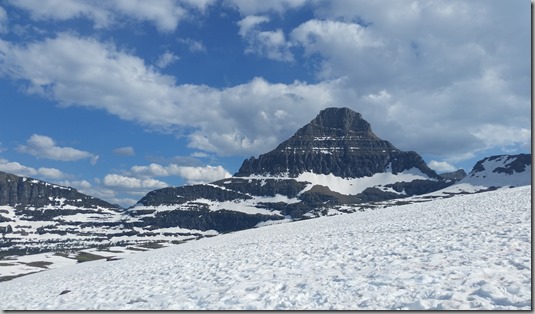 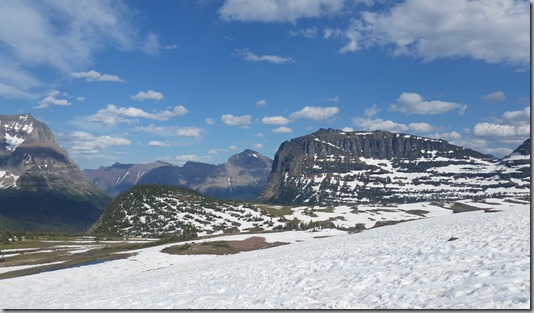 We started the drive back down the Sun road and made a few stops to take pictures with the evening sun. This drive is as spectacular as advertised. 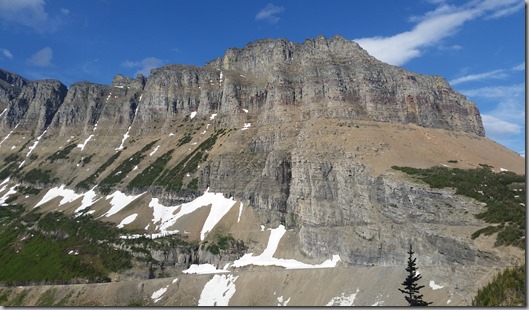 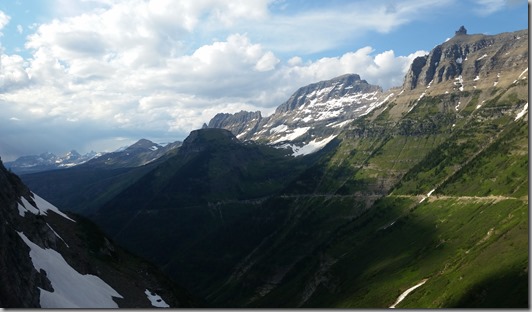 In the middle of the drive is a real nice tunnel now wouldn’t you know. 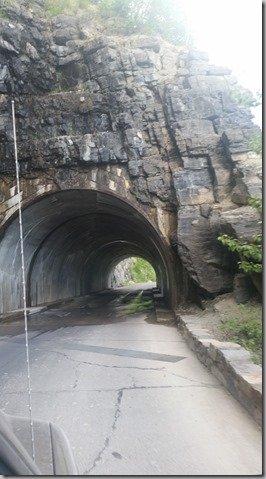 Just like the tunnel in Zion, there are windows cut in this tunnel. Very cool.

That was a full day. We really wanted to fit both activities in before we moved on from Glacier the next day. We loved Glacier National Park! I could easily spend another week there. And that does not even include going to the Canadian side of the park.

We have been invited to a family gathering over in Washington. We are really looking forward to that. We have about 300 miles to get there and we only have 4 days to make it. That is moving fast for us, but I think we are up to it. Some interesting things happened to us along that route. Come back to see us assist a little baby.

Have an awesome day.