We have been out of touch for the past few days. We have been camping in the middle of the Okefenokee swamp and there was no cell signal. It was a cool experience, but I will write about that in the future.

After getting the truck fixed, I was in a great mood. I did not know how much the concerns with the truck were affecting me. First thing the next morning, I got a call from Shiver Diesel. Eric had left his very nice Snap-On flashlight under the hood of my truck. Those lights are very expensive, so we decided to take a trip to Tallahassee to return the light and do a bit of sight seeing. We drove down Highway 90 to get off of the interstate. We were rewarded by the town of Quincy, Florida.

Our first stop in Tallahassee was the Mission San Luis. This mission was occupied from the mid 1600's to 1704 when it was burned by the inhabitants to prevent the British from taking advantage of it. 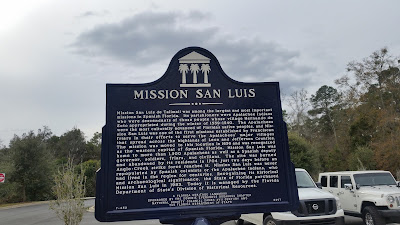 This is a recreation of the mission that existed on this site. The primary inhabitants were the Apalachee indians. There was a film in the visitor center and a museum. We then walked the grounds and looked at the structures that have been built to show us how the people lived 300+ years ago. They had a number of people that were dressed in period attire and tried to stay in character for the time and place. 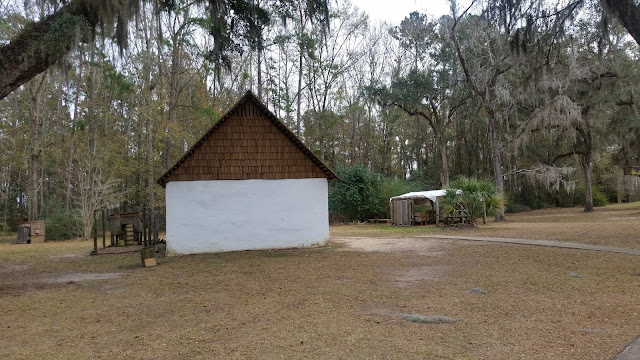 It was an interesting experiance and at $5 per adult it was worth it.

We drove around town for a while finding a Best Buy to get a new external backup drive. We drove right through the campus of Florida State University. Then we saw the old State Capitol. Kim got a quick shot: 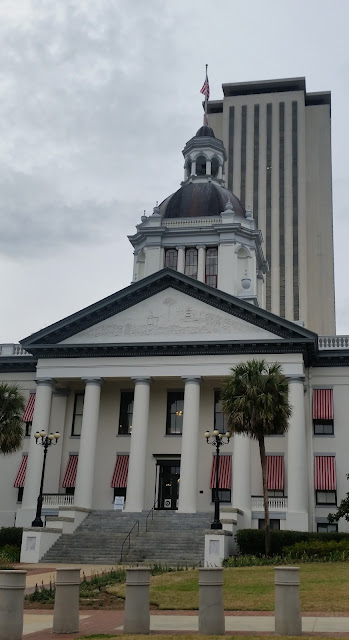 I spent most of the rest of the 5 days that we spent at Eastbank Campground taking pictures and hiking around the area.

I was able to walk to Florida from our site in Georgia. The border was half way across the dam at the end of the lake.

We really enjoyed our time at Eastbank. After 5 days it was time to move further east. I had read about camping in the Okefenokee swamp and wanted to give it a try. I was excited to hitch up and head east. I really wanted to see how the truck worked pulling the trailer. In my next entry, I will write all about living in the middle of a swamp for a few days.
Posted by ktmissouri at 6:49 AM