When we arrived in Hinesville, Georgia on February 4 we started hearing sounds that seemed strange. At first I thought it was on the TV, but I went outside and I could hear them better. It was a heavy Thump, Thump, Thump in the distance. We also periodically could hear and feel some explosions. I remembered that a 50 Caliber heavy machine gun is fired in three round bursts to get the best accuracy. We knew that Fort Stewart was close by. We had seen signs for the firing range when we were driving in.

Some people may have been irritated by the sounds. I kind of like hearing it. I enjoy military history even though I never had the honor to serve in the US military. I really like military hardware and hearing the weapons in action was very cool. One morning we awoke to jets flying low overhead and more sounds of the machine guns and artillery.

I did some research and found out that Fort Stewart is the home of the 3rd Infantry Division. This is a very old and historical division of the US Army. I found out that they have a museum on base and the public could get a pass and go see it. On February 9th, that is exactly what we did.

We had to stop at the base entrance and go inside to get our pass. They did a quick background check and welcomed us to the base. Just after you go through the gate, you see a M1A2 Main Battle tank, a Bradley Fighting vehicle and a M109A6 Paladin artillery system on display. It is an awesome site, I still can't believe I did not get a picture of them. We followed the signs to the museum.

I got out of the truck and had to have Kim take my picture in front of the building and a WW2 half track  and Sherman tank that was there just sitting in the parking lot. 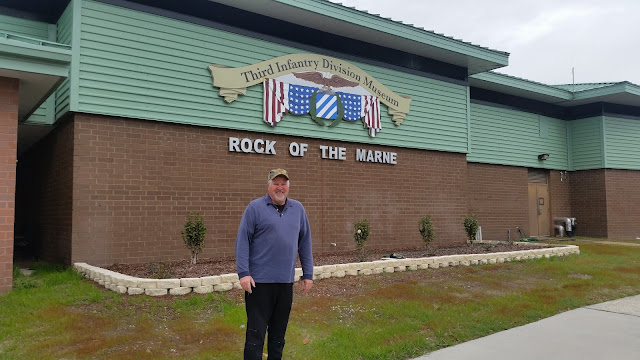 When we went inside we were greeted by an active duty sergeant, who gave us an introduction and offered to answer any questions. The "Rock of the Marne" is a nickname that was given the division during WW1 in France. The Marne river was a battle ground that was hard fought. Many other divisions failed at holding ground, but the 3rd held their ground and helped in the allied victory.

The 3rd ID fought in WW1, WW2, Korea and both Iraq and Afghanistan. They did not fight in Viet Nam. They were stationed in Germany for many years. The museum follows the history of the division through all of those conflicts. There is special note to the 55 Medal of Honor recipients of the 3rd ID, more than any other division in the US army.

The display of artifacts is amazing. I was very impressed with the WW2 era German weapons. 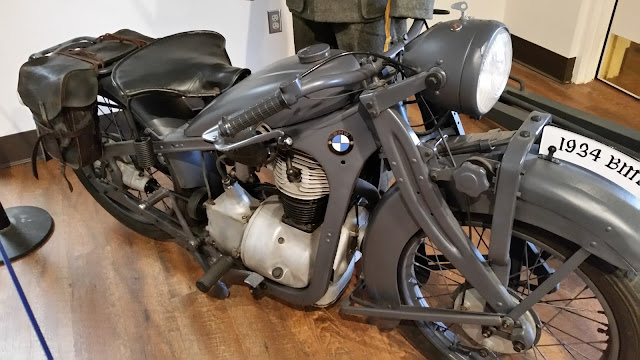 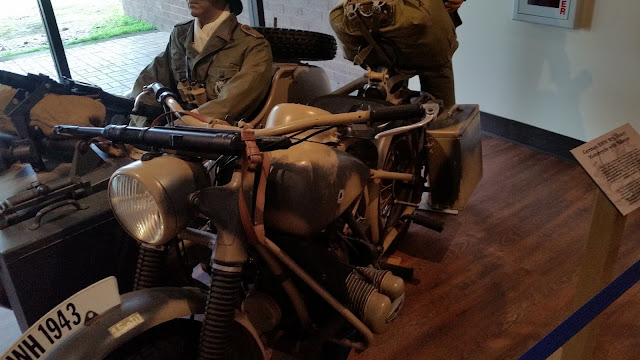 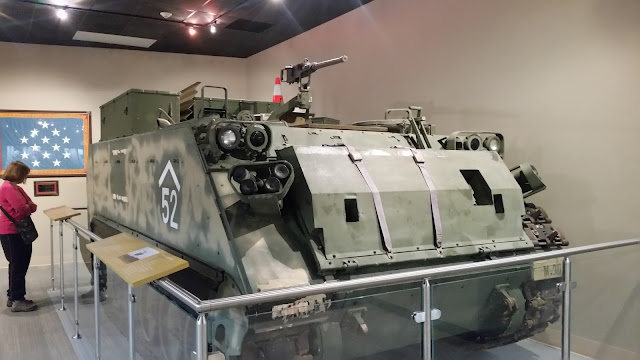 In the picture above, Kim is reading all about Sergeant Paul R. Smith from Tampa Florida. This is the Armored Personal Carrier that is mentioned in the Citation below.

For conspicuous gallantry and intrepidity at the risk of his life above and beyond the call of duty:Sergeant First Class Paul R. Smith distinguished himself by acts of gallantry and intrepidity above and beyond the call of duty in action with an armed enemy near Baghdad International Airport, Baghdad, Iraq on 4 April 2003. On that day, Sergeant First Class Smith was engaged in the construction of a prisoner of war holding area when his Task Force was violently attacked by a company-sized enemy force. Realizing the vulnerability of over 100 fellow soldiers, Sergeant First Class Smith quickly organized a hasty defense consisting of two platoons of soldiers, one Bradley Fighting Vehicle and three armored personnel carriers. As the fight developed, Sergeant First Class Smith braved hostile enemy fire to personally engage the enemy with hand grenades and anti-tank weapons, and organized the evacuation of three wounded soldiers from an armored personnel carrier struck by a rocket propelled grenade and a 60mm mortar round. Fearing the enemy would overrun their defenses, Sergeant First Class Smith moved under withering enemy fire to man a .50 caliber machine gun mounted on a damaged armored personnel carrier. In total disregard for his own life, he maintained his exposed position in order to engage the attacking enemy force. During this action, he was mortally wounded. His courageous actions helped defeat the enemy attack, and resulted in as many as 50 enemy soldiers killed, while allowing the safe withdrawal of numerous wounded soldiers. Sergeant First Class Smith's extraordinary heroism and uncommon valor are in keeping with the highest traditions of the military service and reflect great credit upon himself, the Third Infantry Division "Rock of the Marne", and the United States Army.


I walked out of the museum in total awe of this division and what they represent. We were told that the 3rd ID is being deployed back to the middle east. They told us that much of the firing in the past few days was the various units testing weapons before leaving.

We were honored to have the opportunity to find out more about the "Rock of the Marne". The museum is very well done and well worth the time to go see. Our prayers and respect go with them on their deployment.

The next day we finally left Hinesville to move North and East. Come back to see what we do next.