We left Fort Myers Beach on November 20. We awoke before sunrise and were greeted by a beautiful morning without a breath of wind. The forecast called for light winds early, but picking up with 10 knots out of the north by 8 am. We ghosted out of the harbor in glass calm water. We captured it on video. I shot the update and then Kim captured us going under the causeway. 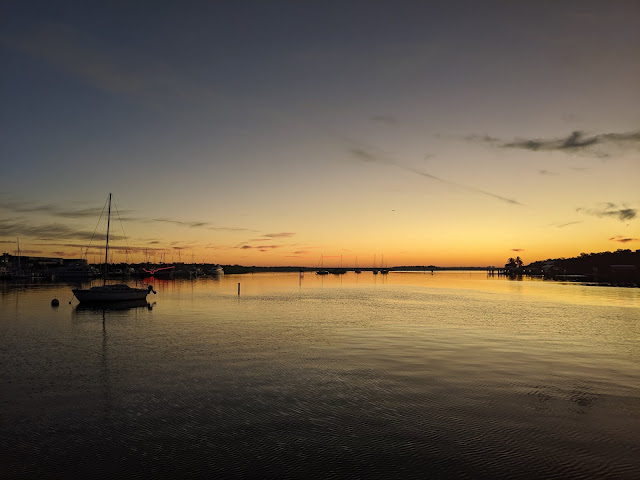 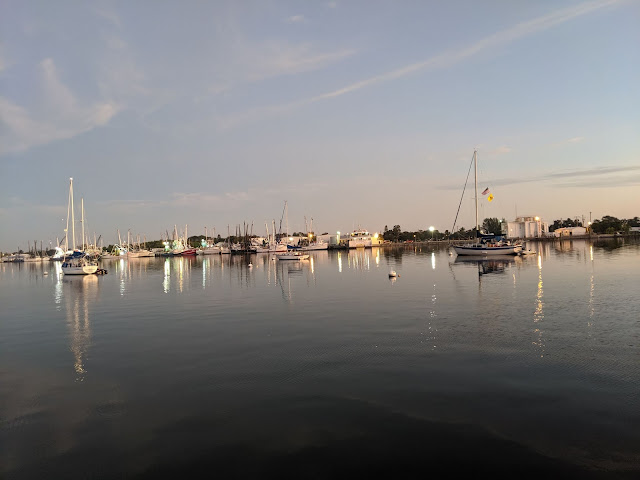 As we entered the open water we had two other sailboats with us. All of us had our motors on because of the light winds, but we had the genoa up to help us along.

We finally got some wind to fill in. It was right behind us, so we decided to catch as much as we could and sailed wing on wing for a while. This caused us to sail a bit further off shore than we wanted, but at least we could shut the motor off for a while.

The plan was to get far enough off shore to then jibe and catch the wind into the Capri inlet at Marco Island. Unfortunately, the wind died as we headed to shore and we had to motor for the last hour of the trip. We then cruised up a series of canals to a small bay called Smokehouse Bay. It is a very protected little bay that is surrounded by large houses and condos. There is also a marina with some restaurants along the shore. The main reason we came here is the Winn-Dixie grocery store. This is a grocery store that has a dingy dock. Yep, we were able to go grocery shopping in our dingy. It was a very cool experience. We bought just short of $100 in provisions. That was the first time we had done any food shopping since we left Palmetto, about 3 weeks before. 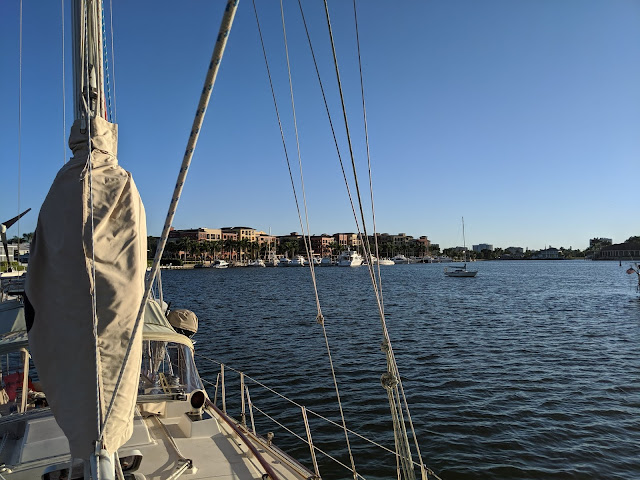 We had not been very social during the trip so far, but that changed on our second night in Marco Island. We made contact with Craig and Susan, the couple that rescued us when we had dingy problems in Fort Myers Beach. They have a house in Marco Island. We met them for a drink at CJ's. It was great to see them again. We really hope our paths can cross again in the future. Also joining us that evening was our good friend Doyle and his friend Darren. We had dinner and really enjoyed showing off our boat and their company for the evening.

We had an enjoyable two days at Smokehouse Bay, but we felt like two days was enough. We were excited about the next stop. We would be going into the uninhabited area that is Everglades National Park. We had one major obstacle to overcome to get there, come back to find out what that is and how we did.
Posted by ktmissouri at 6:08 PM