We spent 5 nights at Pelican Bay. The last three were a bit rough because of the strong North to NE wind. I was ready to get on down the coast and see what was next. We were up before sunrise on November 10th. It was a beautiful morning and we had that same NE breeze at between 15 and 20 knots. The forecast was for it to ease off later in the day.

We were able to pull the anchor without too much problem, but it was stuck hard in good sand and mud. Once we were on our way, we had to motor straight into the wind to get out of the bay. That also allowed me to raise the mainsail. As soon as we cleared the channel, we fell off the wind and then I put out the genoa. SHIFT took off! I just love the feeling of acceleration. We made one jibe and we were headed down the coast. We were averaging 7 knots. It was awesome. I had full sails up in 15 knots just a little aft of the beam. The sea state was flat due to the east wind. It was our best sail yet.

We were making great time. About half way down the coast we saw what looked like a sailing school over by the shore. We could not count how many boats there were in the class. 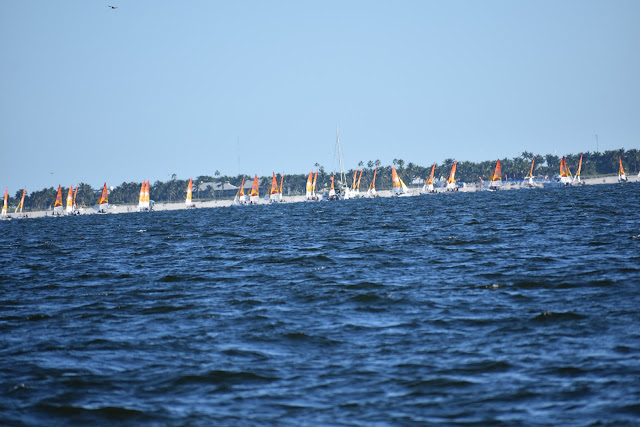 We sailed on and made it to Sanabel Island. At that point we had to turn due East to make it to the inlet at Fort Myers. The problem was that the wind had now shifted to straight out of the east. We decided that we had plenty of time and made a few tacks to move east. It was fun for a while, but then the wind just died, so we started up the motor and came on in the channel. We motored into a very protected mooring field in the town of Fort Myers Beach. The winds were calm and we had a beautiful evening. I don't think the boat rocked all night. We both slept like rocks.

Over the past few days, I have taken a number of pictures of this area. Some of them came out very cool. I am going to post a bunch here and make comments on them.


I have been spending most of my evenings out in the cockpit watching the movements around the bay. We have a large shrimp fishing fleet just across from us and a bunch of bayside bars and restaurants.

The main reason that we came here, was to use some of the facilities that are here at the marina. The mooring ball is about $15 per night, which gives us access to the dingy dock and the showers, water, mail service, laundry and access to walk around the town. We have been taking full advantage of the access to get some things squared away. The first order of business was to get the dingy working properly. When we arrived we tried to go to shore to check in. The dingy died and we were stuck. The silver lining to that cloud was that Craig and Susan happened by in their dingy and saved us. They then took us to check in and back to our boat. We hope to see them again later in our trip. I spent the next morning working on the motor and had it kind of jury rigged together good enough to make another attempt to get to the dingy dock. This time we made it. Then we found the bus stop and found our way to Walmart to get a new gas tank and gas line. I also bought a number of other things on my list. I also placed thee on-line orders that would come to the front desk.

The good news is as of today, the dingy is working well and the sea strainer is sorted. We should be good to go. Now, the plan is to have some fun while we are here. In my next entry, I will show you what we find to do in Fort Myers Beach, Florida.
Posted by ktmissouri at 4:17 PM