We lived in SW Missouri for over 20 years before we retired and hit the road. The area of SW Missouri and NW Arkansas has some of the best paddling rivers in the world. Kim and I have spent very little time enjoying this amazing resource. Shame on us!

My son in law, Brian sent me a message a week ago and told me about a trip he was planning to do on the Buffalo National River. The Buffalo is an area managed by the National Park Service. They have done an amazing job protecting the river and keeping it in its natural state. The river is 110+ miles of beautiful Ozarks country. It is an amazing resource.

The trip that Brian was doing was with the Springfield Parks and Recreation Outdoors Activities Group. When Brian invited me and my sons to go along, we all hesitated but then agreed to go. This would be a 3 day, 2 nights camping along the river trip. As the time to leave got close, I got very excited. Kim decided this would be a guys trip, so Brian and my sons Scott and Mark were going. Sadly, my son Michael decided not to go.

We were being led by two employees of Springfield Parks, Justin and Elizabeth. They were great. One reason I decided to go on this trip was to learn from them and use that knowledge to plan future trips. We also had 4 others that signed up for the trip, Paul, Larry, Serena and Clarissa. We had no drama on the trip and the group quickly became one cohesive unit.

We put in at Rush Landing, which is the beginning of the 24.4 mile section called the Lower Buffalo Wilderness. It was truly wild. We did not see another person on the entire trip. The solitude was awesome!

I was using my Sea Eagle 420X for this trip. Using an inflatable for this trip could be an issue and I would have preferred to have a solid boat, but I had no issues.

We left and paddled along the glassy water. There were a few small rapids, but most of the trip was just floating along and enjoying the scenery. There were deer along the shore and many different birds including Bald Eagles, Hawks, Blue Herons, Green Herons and Belted Kingfishers.

We only planned to go about 5 miles the first day. After about 4 miles we hit a major thunderstorm. We had fairly intense lightning, so we stopped and took to the cover of the trees. 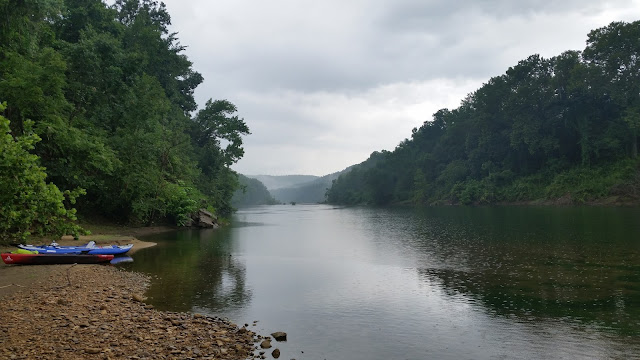 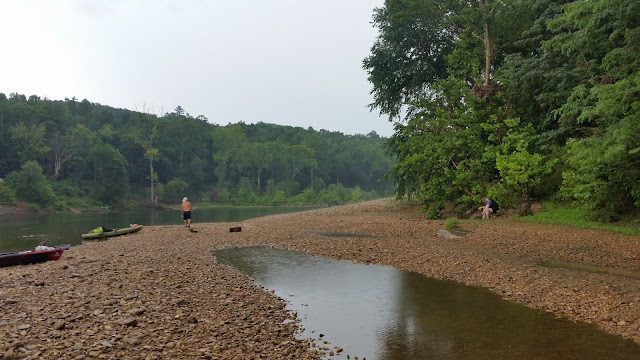 A short time after getting going again we found a place to camp for the first night. There are many gravel bars along the river to set up camp. There are no improved campgrounds, so being ready to filter water and be totally self sufficient are required. My battery for my CPAP did great and was only 50% drained after two full nights.

Brian, Scott and Mark slept in hammocks. They had rain flys, which would come in handy on that first night. I slept in my tent which handles rain without an issue. 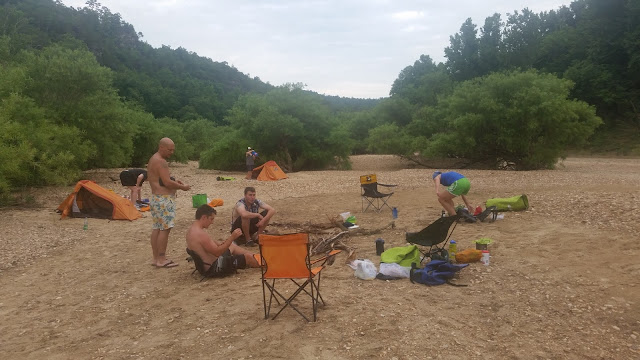 We all hung out together and cooked our dinners. The food was provided as part of the trip and was different than I would normally eat on a trip like this, but it was very good. We were assigned a cooking partner. I cooked with Brian. Scott cooked with Larry and Mark was lucky to get Serena. After dinner we played a very enlightening game of Cards Against Humanity. That is all I will say about that. We finished the evening with a nice sunset. 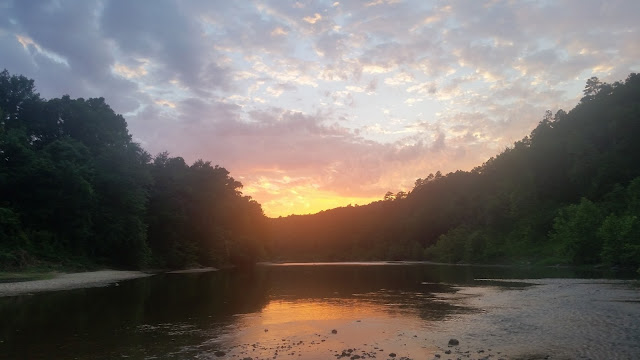 We went to bed early and were awoken many times during the night to hard rain and lightning. It was quite a first night out.

We took our time getting on the river the next morning, but we knew we had over 10 miles to go on the second day. Along the way, we saw a Bald Eagle up in a tree overlooking the river. He posed for pictures.

We had a long day of paddling. The scenery continued to be amazing with high rock bluffs and more wildlife. I surprised a mom and spotted fawn right along the river bank at one point. 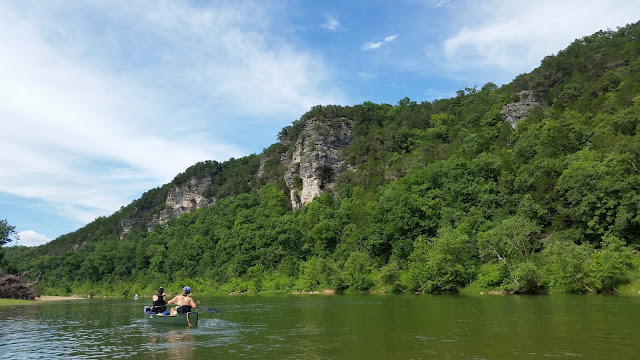 After the long paddle we spotted our goal for the night, Elephant Rock. Elizabeth knew of a great campsite right across the river from the rock. It made for a great camp for the second night. As soon as everyone arrived and set up camp we hit the water and just soaked for a long time. It was HOT. 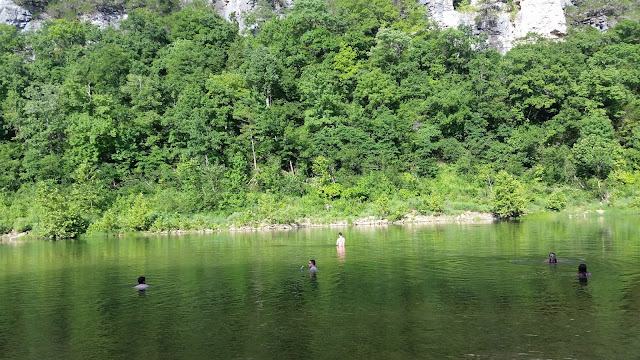 Here are a few shots of our camp. I decided to camp next to the boats on the river. Everyone else went up on the bluff. That would prove to be fortunate. 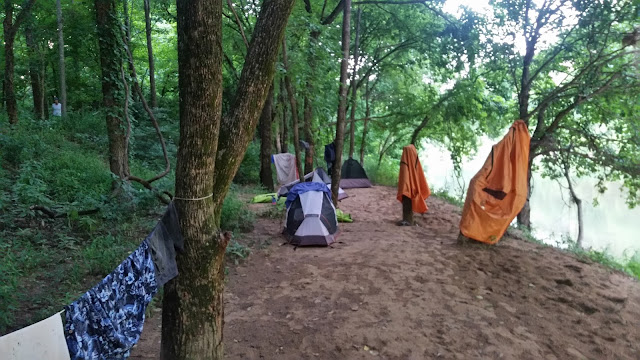 I went to bed early again, but for some reason awoke at about 1AM. I looked out the tent and noticed one of the boats was floating and one of my stakes was in the water. The water had risen about 2 feet. All of the boats in the picture above would have been in the water the next morning. I got up and moved my tent and all of the boats as far as I could up on the bank. I then shoved a stick in the ground at the waters edge that I could see from my tent. The good news is that the water did not rise any further as we approached morning.

I awoke first and made coffee and enjoyed the quiet morning and a heavy fog. Something caught my eye to the left along the river and then saw a huge Bald Eagle cruise down the river right in front of me about 10 feet off the water. It was a magical moment.

We got moving a bit quicker the second morning. We paddled about 4 miles to the junction point of the Buffalo and the White Rivers. There we saw a very large rattlesnake swimming across the river. Scott and I got a very good look at it. Sadly, no pictures of this impressive creature.

The final act of the trip was a 3/4 mile paddle against a strong current up the White River. The water quickly changed from the 80+ degree water in the Buffalo to about 50 degrees. It felt we went into air conditioning. It was a hard paddle after 3 days on the river, but we all made it without incident. We pulled into the landing at Buffalo City. We got loaded and headed back to Ozark. The trip home was quiet with some of the team sleeping. 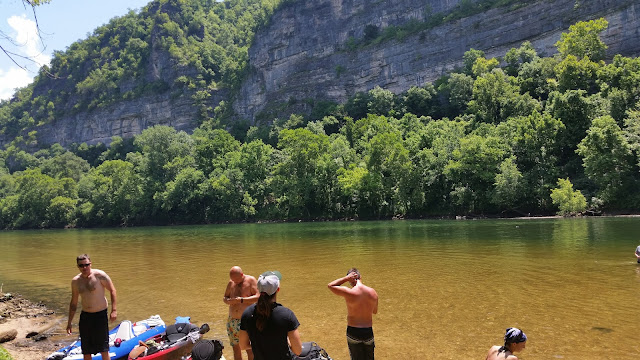 It was a great trip and I could not ask for a better group of people to paddle with. I want to thank Brian for asking me to go. I am so glad I went. And a special thanks to Elizabeth and Justin for making the plans and leading us through one of the most beautiful and untouched parts of the US.

I took some GoPro Video along the way and added some music and came up with the video at the link below. Check it out.

Here is the URL: https://youtu.be/FybPywMg59A

We are going to stay at the ranch for about a week and get ready to get back on the road. We are planning to head back to Bull Shoals for about three weeks and then heading to Colorado for about a month. Check back to see how that all works out.
Posted by ktmissouri at 12:30 PM