We left Lake Corpus Christi State Park on December 7. We drove about 180 miles to Garner State Park. It was a nice day for a drive through south central Texas with nice sunshine, about 75 and no wind. The forecast for the next day was for a big cold front to come through dropping the temps to near freezing.

When we arrived it was obvious that this was not like any of the other State Park's we have been to. They had 4 check in windows and over 500 sites. We were told this is most visited SP in Texas. On this day, it was just me and one employee. The place was almost empty. They had a major part of the park closed. This is the slow season, but they were full just a week ago. We had our choice of sites and settled on site #12. It is a long back in with a huge rock bluff out the back window. 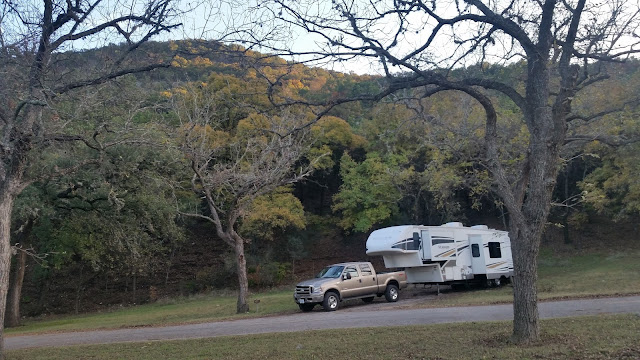 Garner State Park is known for two things. First it is the Rio Frio. The Frio river is a cold clear river that is a favorite playground for people in this part of south Texas. There was no way we were getting in the water on this visit. The second thing is the many miles of established hiking trails. I was planning to hit as many of those as I can.

As soon as we set up I decided to get out and walk around while the temps were still comfortable. I was able to walk right up to this wild turkey. I later found out it is a Rio Grande Turkey, that is a particular strain of the wild turkey. I would see these guys throughout our visit. 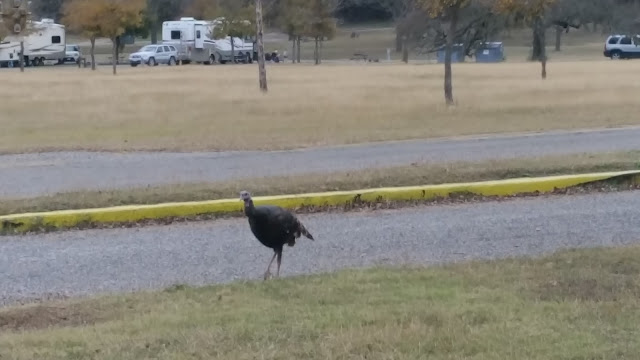 I then walked down to get a look at the river. It is a beautiful clear cold river. 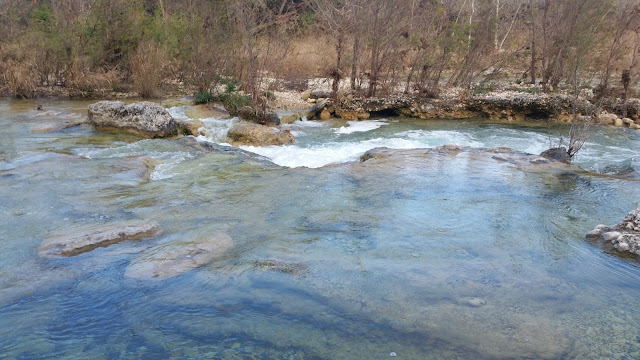 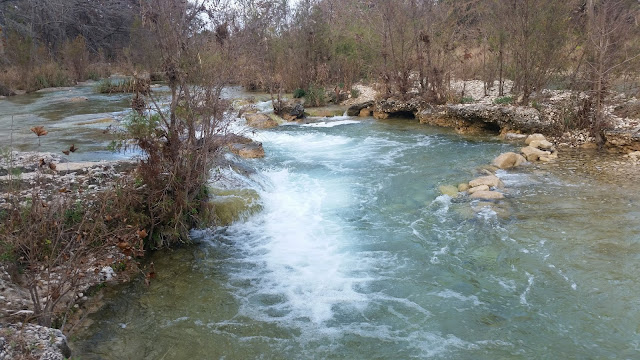 The water is so clear because the area is all limestone, which provides very little sediment.

The front arrived as predicted. When I got up, the outside temp was about 37 degrees.
After going for a short walk outside, I decided that it was perfect to take a walk in the woods. I knew there was some significant elevation. I put on my hiking boots and camelback and headed out. I started with Wild Horse Creek Trail. It was a nice trail that wound through the woods and then went straight up the bluff. 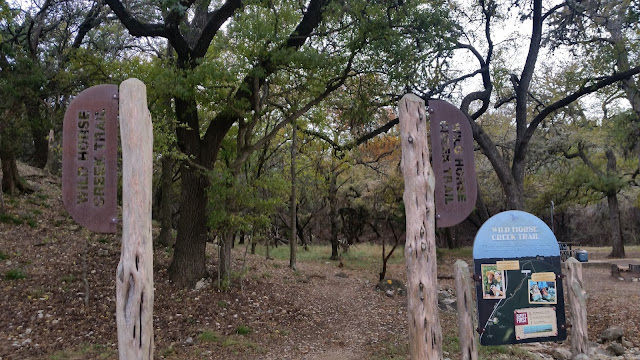 At times the trial was nice and easy and then it would get rocky and very steep. 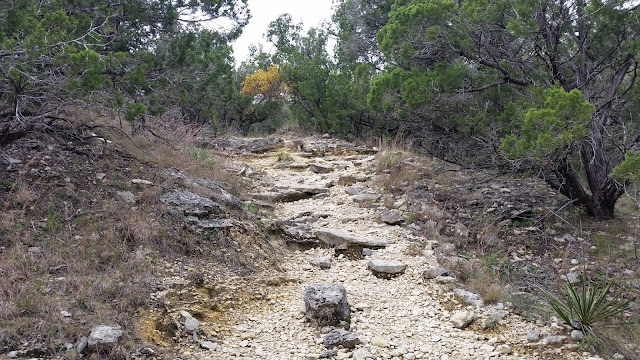 I walked by the old gate that was built by the CCC. This park is also a CCC park, just like the last place we stayed. The rock work is unmistakable. 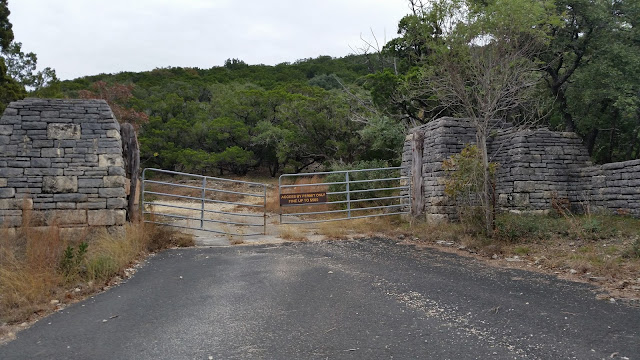 I think this is one of the high points. 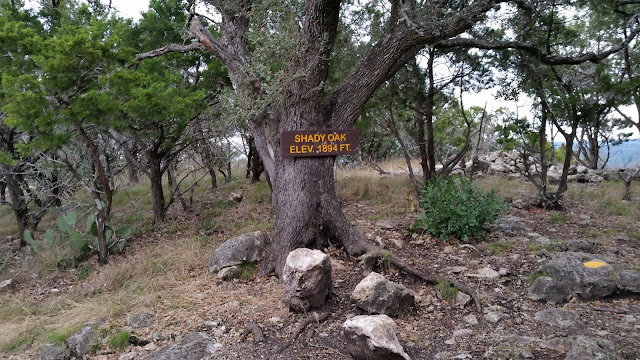 A few views from up there. The bluff in these shots is Old Baldy. There is a trail that goes to the top, but it said it was very steep. The stuff I had been climbing was steep enough. 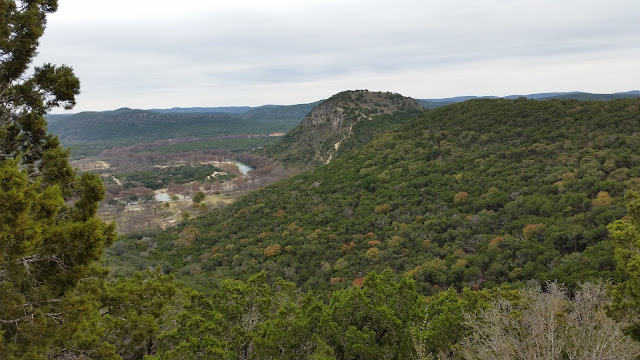 You can see part of the original campground in this shot.

There was a small cave called Crystal Cave. The trail got very steep right around the cave. 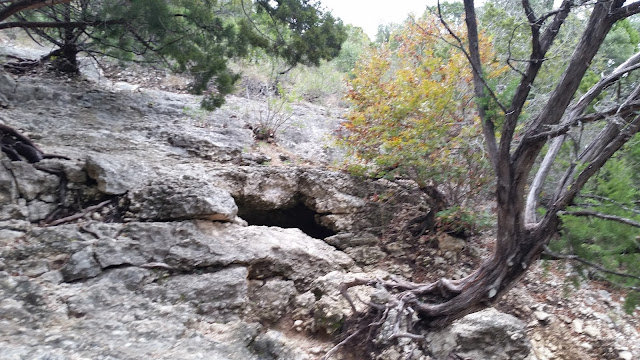 Here is a shot back up at Old Baldy from the old campground. It is called Oakmont and Pecan Grove. It is a pretty congested area when the park is busy and would not be my favorite place to camp. As it turned out I liked the site we were in as much as any in the entire park. 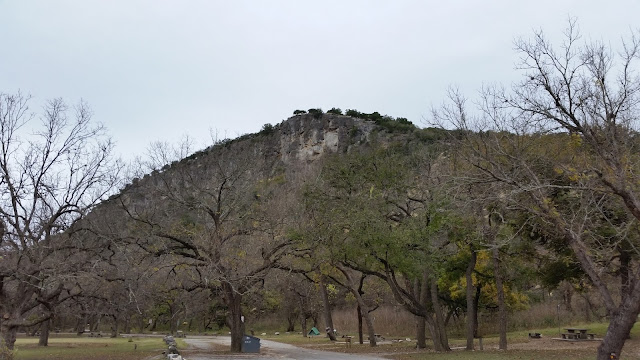 They have an old pavilion that was of course built by the CCC. 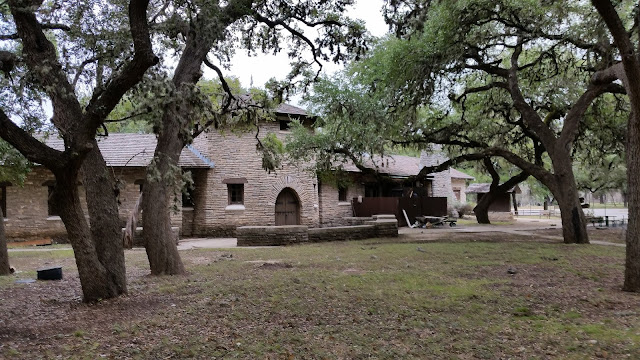 I then walked back to camp along the river completing a 4.5 mile hike. I worked hard enough to never get cold.

We hung out and played on our computers because this park has zero Verizon Signal. And no OTA TV. They have very weak wifi at the visitor center, but the speed is almost unusable. I can't believe it would work at all when this place is full.

The next day, I went for another hike out in the flat area. I did another 4 miles, but it was much easier. I had fun checking out birds and other animals. I walked through the part of he park that was closed and it was very nice. That would be my second choice for a site in this park. I did see a Roadrunner. 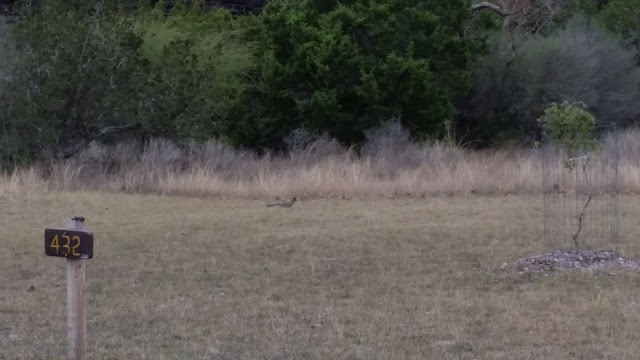 I saw a different section of the river that is very interesting to look at. 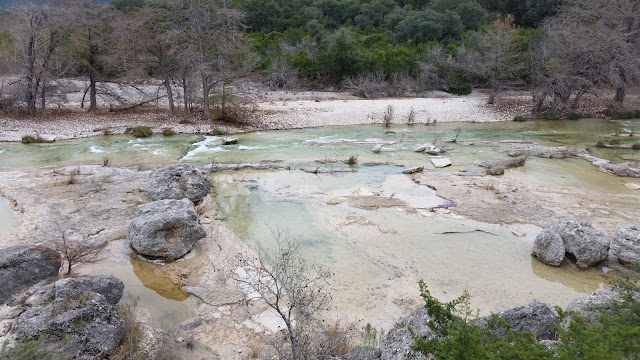 While we were there, we had this group of 14 turkey just hanging around the park. I guess they are smart enough to know where they are safe. I sat in my chair in the trailer just watching them. I really didn't have anything better to do. 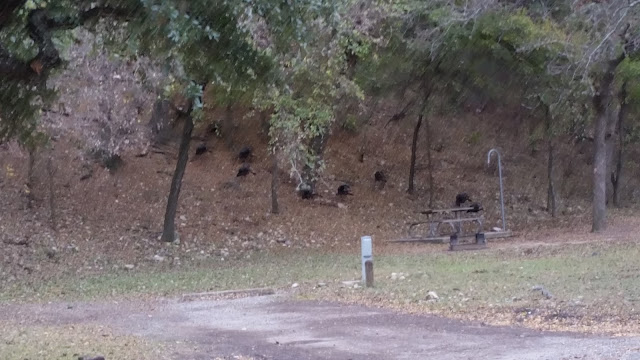 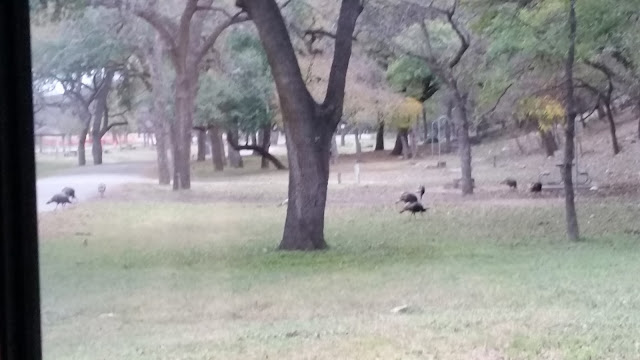 The park did get a bit busier on the weekend, but the weather kept most people uncomfortable camping in a tent.

We ended up staying 5 days. We liked this park, but it just had a strange vibe. It was kind of like going to an amusement park when it is closed. The strange thing is that even though there was only about 10 rigs in the campground, the State Park Ranger was on patrol through the park almost constantly. We decided to go into the town of Leakey to do laundry and he pulled me over because I don't have a plate on the back of the truck. (That is just the way Missouri does it) He was very nice when I explained and he didn't even ask me for my license. That is the first time I have been pulled over for that in all of our travels. He told me that he was just looking for something to pull me over. He wants to talk to as many people as possible to make sure there is not illegal activity. He said that they were close enough to the border to be a bit more aggressive.

We Left Garner SP on Decemeber 12 and drove to Del Rio. We decided to stock up before we went into Big Bend. We stayed at a nice little RV park on the edge of the Armistad National Recreation Area. It was called the Holiday Trav-L RV Park. It is a Passport America park and was $14.50 per night. There is some $4 per night camping around the lake, and it looked pretty nice, but we decided to move on. This NRA is a cooperative project between the US and Mexico. We were only 10 miles to Mexico. We did have a couple of nice sunsets there.

We left Del Rio today, December 14 and drove to Big Bend National Park. We did not have any kind of reservations and were not sure how it was going to work out, but I had a back up plan. We ended up scoring a back country campsite, large enough site for us, right off of pavement. The cost is $14 for all 7 days. Our first night is Tomorrow. We are at Stillwell Store and RV park tonight. They are very close to the north entrance of the park. We will see how we do out in the dessert all by ourselves. It may be a week or so until I post again, but the visitors center has WiFi and it is not far from our campsite.

Posted by ktmissouri at 7:43 PM