We left Mustang Island SP on Monday, December 5. We had one thing to take care of before leaving the Corpus Christi area, so we chose a short trip for our first day back on the road.

We had a tire on the trailer that was “cupping”. I have had good luck with Firestone Transforce HT LT tires, so I went to a Firestone store to get their opinion. After some discussion, I decided to rather be safe than sorry and had them replace two tires and place them on the rear axle and move the rear tires to the front. To document this for myself, I replaced the two tires that I had purchased in Joplin about 3.5 years ago and put the tires I had purchased in Denver on the front axle. I am guessing that I got about 30K miles out of those tires. They had plenty of tread down the middle, but the edges were wearing.

That whole process took about 2 hours and I was happy that we only had about 50 miles to get up to Lake Corpus Christi SP. We had been watching the weather and knew that Thursday was a bad travel day. A major front was coming in with wind a much lower temps. We decided to just stay two nights and make Wednesday our travel day. We looked over the sites and really liked site #11. The problem is that I had made a reservation for three nights for a full hook up site. A FHU site is all the web site would allow me to reserve. Site #11 is a Water and Electric only site and is $5 cheaper. The problem is that Texas State Parks charge you a $10 fee to downgrade your site. Is that a stupid rule or what? You also have to pay a $10 fee if you shorten your stay. The good news is the system will only charge the fee one time, so we went for site #11 and shorted our stay. Not a big deal, but it just leaves a bad taste in your mouth. I just hate making reservations. 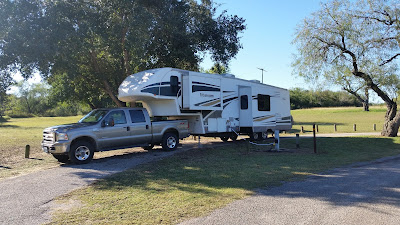 We were in an area of the park that was very empty and we really liked being alone after being in tight parking for the past 40 days. Just as the sun was setting, we saw deer in the field behind the rig. I got this shot our the back window. 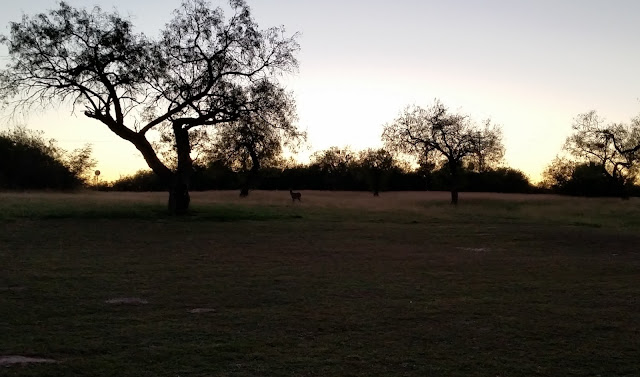 I got up on Tuesday and wanted to get some exercise. I took a 7 mile bike ride through the park. I was surprised by the amount of hills and it turned out to be a pretty strenuous workout. I stopped during the ride to check out the pavilion that was built by the CCC. Lake CCSP is one of the many parks in Texas that were originally built by the CCC in the 1930's. Here are a few shots of the lake and the rock work. 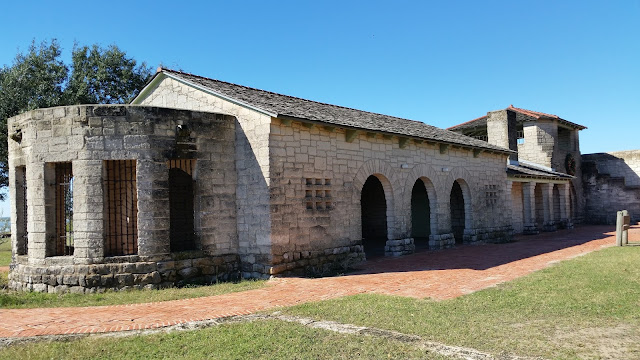 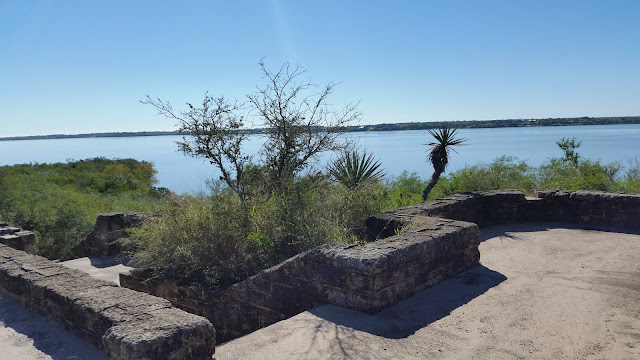 I got back to the rig and it was time to go to work. We wanted to give the entire rig a good cleaning inside and out to get as much of the effects of the salt air removed as possible. I took my motorcycle off of the back of the rig and cleaned it and rode it around the park to make sure all was working well. I plan on getting some use out of the DR in Big Bend NP.

We worked for most of the day. When we were done, I was very pleased to have that completed.

After dinner, I convinced Kim to take a walk to see the the pavilion. We got to the pavilion just as the sun was setting. 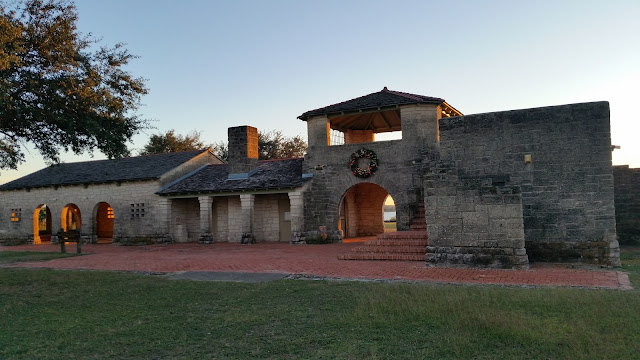 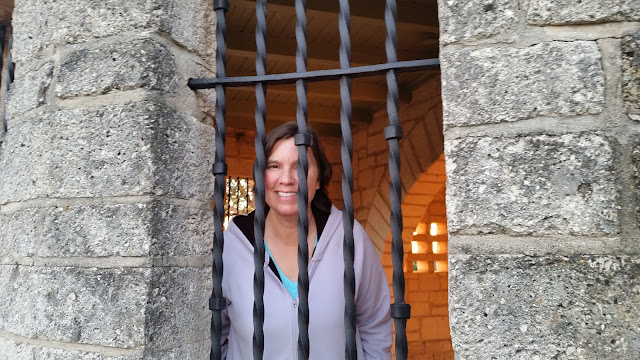 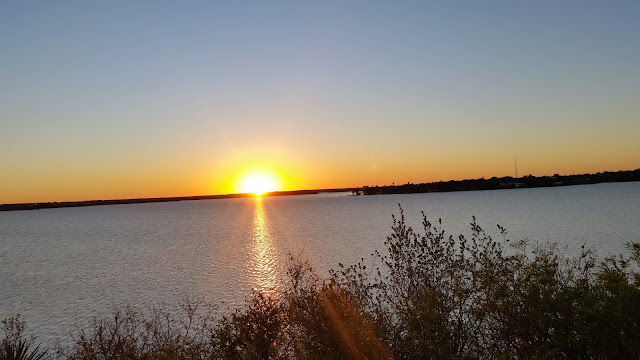 Our stay was brief, but we liked Lake CC SP. There were many deer to see and I even saw a pair of green jays.


With the weather coming in, we got up on Wednesday, December 7 (A date that will live in infamy), hit the dump station and hit the road to Garner State Park. We have been hearing about this state park for a long time, but had never been there. Come back to read about our adventures at the most visited SP in Texas.
Posted by ktmissouri at 3:23 PM