It has been about a month and a half since I have last written in my blog. When we got back to the ranch, I was tired and ready for a rest from everything including writing. I have continued to take pictures of our many activities, but wasn't sure if I would ever write about it. I have decided to put this entry in the blog as an update to all of our friends and family and to publish a few pictures that I like.
We enjoyed a very wet spring at the ranch in Missouri. We stayed there from April 18 to May 14. We mainly spent time with our children and grandchildren.
On May 15, Kim, Our granddaughter Isabella, and I took a trip to check on the boat. We stopped off at our Son, Michael's house to see his family. When I arrived, our grandson, Connor had a list of all he wanted to do in the one day we would be there. There was no way to do that, so we decided to stay an extra day to complete the list. We played games, went for walks and hikes and had the best nerf gun war of all time.
We also stopped in to see our friends, Dick and Cathy for a too short visit. Then we headed for Alabama to check on the boat. I did a number of maintenance tasks and tests and determined that the engine was good to go. We then motored up the boat up the river about 7 miles to anchor out for the night to show Isabella what that was all about. We had a blast going on a dingy ride and playing on the river bank. Isabella even found some "quick sand".

Our Daughter, Shannon and family decided to go to the Great Smokey Mountains while we were in Alabama, so we decided to join them. We had a great time hiking and doing some of the tourist stuff. The bad news is that our Grandson, Jake broke his leg when he crashed on a scooter the first day we were there. He is now in a cast and should be good to go by the end of the summer. The crowds were smaller than normal because of the virus, but most outdoor activities were open. The other bad news was that Kim and I had to stay 5 days longer than planned to get a new turbo installed in the truck. We took advantage of the additional time and did some hiking on our own and saw some more remote areas of the National Park.

We arrived back in Missouri on the 5th of June. We made it in time to meet up with fellow blogger, Mark from Missouri. Here is a link to his blog: ourfutureinanrv He is a new RV full timer and has a very informative writing style. Mark and his wife, Karen took a tour of the ranch. We had an awesome time and can't wait until our paths cross again. 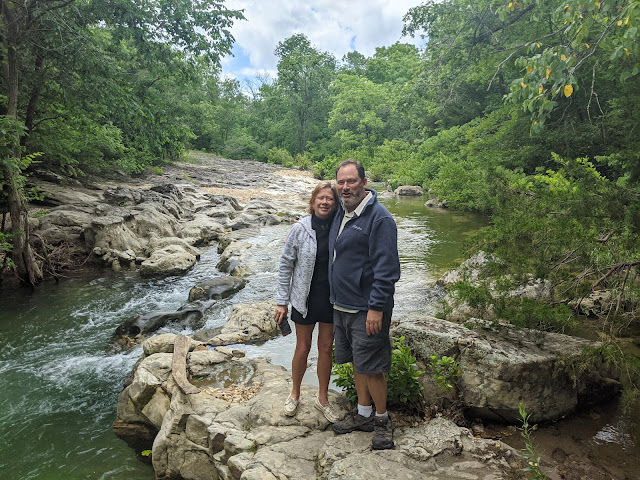 For the past month we have been going to our grandson Will's baseball games. He loves to play, but his team has had a tough year. They had lost all of their games until last Thursday night. They had a double header with two of the better teams in the league. They ended up winning both games! Yeah!!!
Fathers Day weekend was awesome! I was able to see all of my Children and Grandchildren. We all met at the ranch for some riding and then a float trip. Michael's family and Scott could not make the float, but it was still plenty of fun. We were very glad that Mark's girlfriend, Callie joined us. We are very impressed by her and would be happy to see her stick around for a long time.
Posted by ktmissouri at 4:57 PM No comments: