Boat Repairs Completed and Why Are We Here?

I am sitting here in SHIFT in the Gulfport Marina on a rainy, but warm day. It is very cold up north with high temperatures below freezing. We are very comfortable here with temperatures in the mid 60's. It was about 75 yesterday and sunny. I should have been out sailing, but yesterday was the big day. We have been waiting over three weeks for this day. This was the day our new holding tank was to arrive!

It has been three weeks without a functional head on the boat. We have enjoyed our evening walks to the marina bathrooms, but it was time to get the boat ready for cruising again.

I started the day by walking the 1.5 miles to the local marine store. Ken's is a local chandlery that is a candy store for a mariner. I enjoyed walking around and checking out all they had and now know if I need anything while I am here, this is the place to go. I bought what I thought I needed for the installation of the new tank and then walked back to the marina. Just as I arrived at the office, the UPS truck pulled up and had the tank. That was a great start!

I got the tank back to the boat in a dock cart and then as boat projects go, I found that the fittings I had, would not work, so back to Ken's to get the right ones.

I spent the next two hours doing boat yoga. Getting by body into the correct position to reach the hose clamp or bolt that needed to be tightened. I have to say that even after the rough start, all went well. We then tested with fresh water and there were no leaks. Yeah!!

That is one major project completed. I have spent the past few weeks doing a number of other projects on the boat. I have been doing some reading about my engine and found that the valves should be adjusted every 500 hours. I had no idea when they had last been done, so I went after that project. All was going well until I had to move a coolant hose out of the way to remove the valve cover. The hose broke getting coolant all over the place. The hose was old and it obviously needed to be replaced. It was good that I found this problem while we were here at the dock with my truck ready to take me to the parts store, rather than out on the open water. It was still an unplanned part of the project. It seems all boat projects have those unplanned parts. The good news is the valve adjustment was very similar to the valves on my KTM motorcycles, so I knew exactly how to do it. I found that both the intake and exhaust on #3 were out of adjustment. I completed the adjustment and then put it back together and it seems to be running great. We will see how she runs under load on our next outing.

This past weekend we had a beautiful day, so I decided an outside project was in order. I know you should clean and lubricate your winches about once a year. We have 7 of them on the boat. We use three of them each time we sail and the others are rarely used. I decided to rebuild all three of them. The project took me about 6 hours, but I was very happy with the result. They do work much smoother, but the best part is that I did not drop any parts or tools in the water.

I do believe that it is important to do your own maintenance and upkeep if you plan to be an offshore sailor. First, you know the job was done correctly and second you need to know and understand all of the systems on your boat. I get a great deal of satisfaction getting these jobs done and find it an enjoyable part of this lifestyle.

I have been asked, why are you staying in Gulfport, Mississippi? Well, the answer is a combination of many things.

When our plans to go to the Bahamas changed due to the hassles of travel in COVID times, we started thinking about where we could go this winter. We were going to be in the Mobile, Alabama area after coming back down the river. Sailing to Florida is what most boats do to get to warmer weather. We thought about that, but we learned last year that winters in south Florida mean high costs for marinas and plenty of other boats. Staying on the hook is ok, but you will see plenty of passing storms with strong north winds. That makes for sleepless nights watching the anchor. We thought we would like to try some time in a marina along the gulf coast that will give us good protection from the north and easy access to water and electricity. The cost of the Gulfport Municipal Marina is less than half of most marinas in south Florida and one third of a marina in the Keys. Going back to Boot Key Harbor was on option. We loved it there, but we like to try new things and go to new places.

We have seen some cool weather here in Gulfport, but there have been plenty of nice days mixed in. Sailing out of this marina is easy. You only have to motor about a quarter mile to get to open water, where you can put up the sails and then head out into Mississippi sound. That is the other thing we like, the open water just outside the jetty's is not the open gulf. There are a line of barrier islands that start off Louisiana and go all the way to Florida. These create the sound and reduce wave action significantly while still not interrupting the wind currents. So, we have the wind without the waves. That makes for some very pleasant sailing.  We have been told that March and April is a great time to visit the islands and stay on anchor. We will hold on to our slip in the marina because it is cheaper by the month and then just come back here when bad weather is approaching. So far, we really like Gulfport.

One nice thing about this marina is there are a few liveaboards here. They have been great. We spent the evening getting to know Bill and Annie last night. There is nothing better than sharing sea stories and talking about future plans.

I will finish this entry with one of my favorite things. We get to enjoy some amazing sunsets on the water. A few nights ago we had a special one. Enjoy! 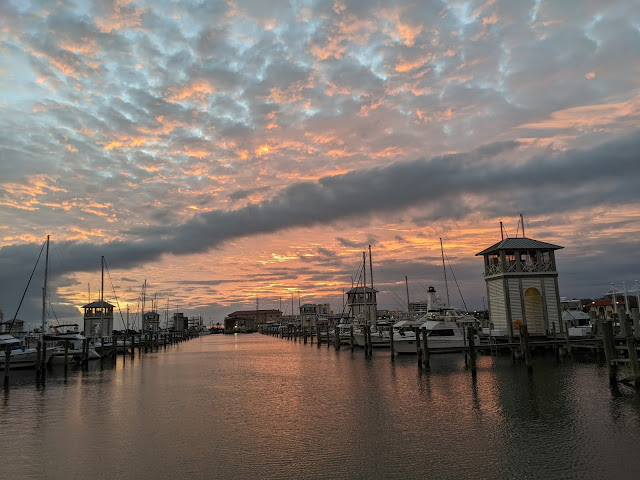 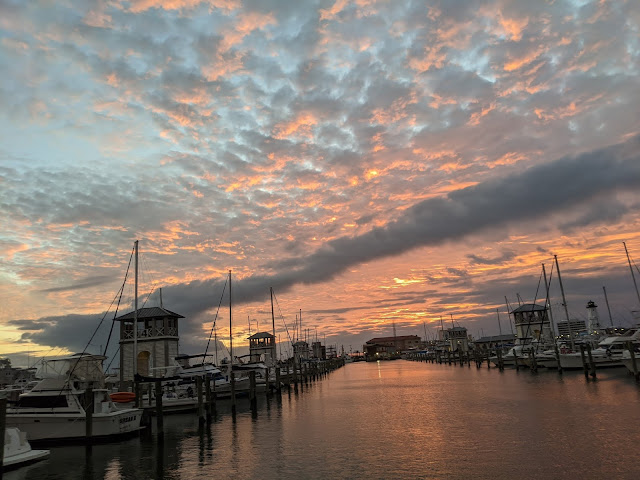 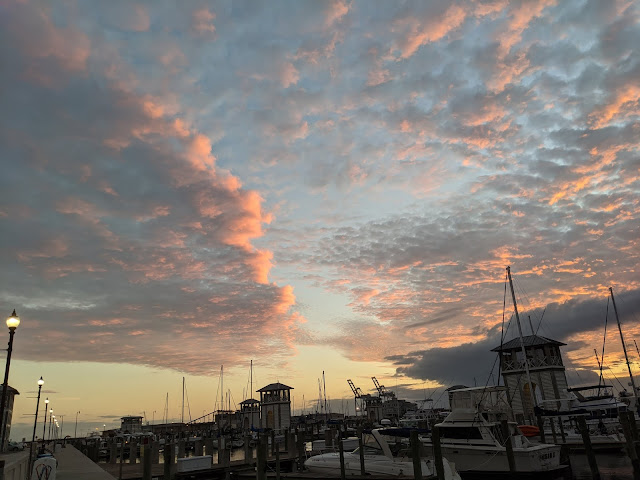 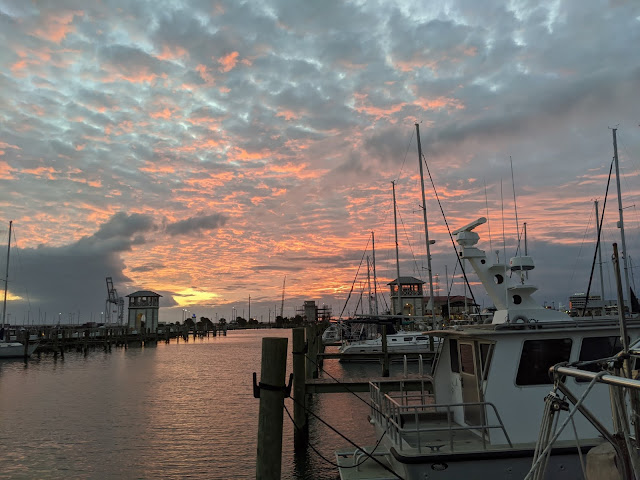 Boat Problems and January in Gulfport

We arrived back in Gulfport on January 6th. It did not take long to settle into life aboard SHIFT. January can be cool, but we have not seen any freezing temps this winter. We have seen periods of settled weather with high temps in the 60's F, and lows in the 40's F. We have also seen some northern fronts come through with winds over 20 knots and cold north wind. On those days, we hunker down inside the boat. We turn on our little ceramic heater and are perfectly warm and comfortable. It is no different than staying in an RV park with electric.

The one thing that happens when we have a strong north wind is the water leaves the marina. Our normal depths of 9 feet go to as low as 6 feet. This requires us to adjust lines and it makes it difficult to climb up the 3 feet to the dock.

In the picture above you can see the chafe guards that Kim made for our dock lines. We were gifted the material back in Palmetto from our boat neighbors on Oo La La, and it has worked out great to protect our lines as we rise and fall with the tides.

A couple of times when we were out and about we saw dolphins in the marina. They swim around and catch small bait fish for a nice meal. They will swim right up and look at me as I stand on the dock and take their picture. 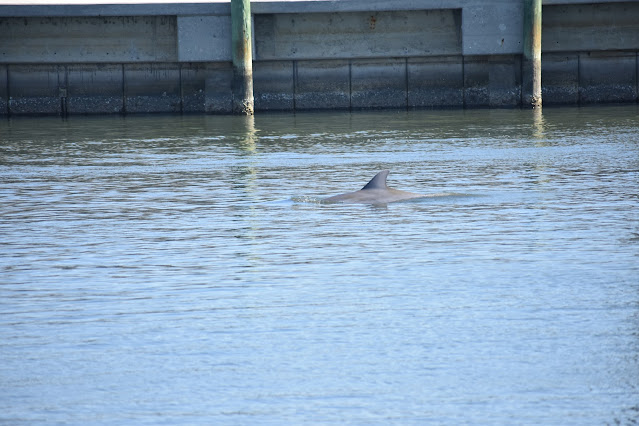 All was going along well until one day about mid month, I entered the boat and noticed a strange smell. Upon further investigation, I found a leak in our holding tank. The good news is that the holding tank is in a separate compartment in the bilge of the boat. That contained the leak. The bad news is the only way to clean it was to get the pump-out hose down in there and pump out the disgusting/ smelly mess. I then removed the tank. I was guessing it would take about an hour, but as boat projects go, it took all of 6 hours and a few swear words to get it out.

Kim went to work doing a deep clean and disinfect on the compartments that hold the tank and the macerator and Y valve. They then got a fresh coat of paint.
I then ordered a replacement tank. I found a company in Florida that builds custom poly tanks. They had all of the specifications for this tank. It only costs a little over $400. We have to wait 3 to 4 weeks for delivery. This whole problem means we have no working head on the boat. We have to walk to the marina office to use the bathrooms. Oh well, such is boat life.
We did celebrate our 41st anniversary during January on the 19th. It was a beautiful day and we decided to go for a sail. We had light winds, but we made it out to Cat Island and back.

All in all it has been a good month. We are leading a very relaxing life that includes a daily walk of about 3 miles for me. It is beautiful around here with nice sunsets and plenty of wildlife. Here are a couple of bird shots from a few days ago.

That is about it for January in Gulfport. We are already seeing the weather warming a bit. It was in the high 70's yesterday. We hear that February brings some nice sailing days. We are looking forward to sailing out to the barrier islands and exploring them by dingy. I will write about that in my coming entries.