It has been a little over a month since I have written in this blog. It seems that we have been very busy while we were at the marina in Gulfport. Hanging out with new friends and working on our boats. Then we went on a great 3 day trip out to the islands, which I will write about in this entry. We then had a short window to get in the truck and head north to see our son, Michael and his family before he went into an outage at his Nuclear Plant, which seriously limits his availability. We then continued on up to Missouri to see the rest of the grandkids and spend some time on the ranch. We have an event here at the ranch on May 16, which we will assist with, and then we are hoping to attend our grand daughters college graduation before heading back to the boat.

Back at the end of March, we noticed a new boat had arrived on our pier. Not just any boat, but an Island Packet, the same brand as SHIFT. Her name is Moosetracks from Houston, Texas. She is a 45, making her 10 feet longer than SHIFT. Her owners are Brian and Gill. They sail with their two Blonde Golden Retrievers. I didn't get many shots of them, but here are a couple:

We had a great time getting to know these two. They have recently retired and are just starting their sailing life. Brian has much more sailing experience than I do including a trip from Hawaii to California, so it was great to talk sailing with him. We also spent some time going over the charts to discuss their options for their upcoming trip to Florida and the Bahamas. We also spent a couple evenings playing dominoes and cards. We got together with another couple, Bill and Annie, that sail on an Island Packet in the marina and went out to dinner. Yes, we actually went to a restaurant and had a sit down meal. We all commented on how much we had missed that over the last year during these crazy COVID times.

We had some rough weather for a couple of weeks, so we just stayed in the marina and got some boat projects done. Brian and Gill were waiting for the right wind to go East to Pensacola and then off shore further east. We had also been waiting for the right wind to go east along the Gulf Island National Seashore. We had been watching the weather and we found a good day on April 4. The wind was predicted to start out from due East, which would allow us to go south  to Ship Island and then clock around to the south, which would allow us to head east up the chain of islands. Much to our delight, Brian and Gill decided to go with us.
April 4th dawned a beautiful day, with light winds. We got going and once we got in the sound, we raised the sails and shut off the motor. The wind filled in and we had a nice sail out to Ship Island. I took a few shots of Moosetracks under sail. She is a beauty.

We were hard on the wind all day trying to make the best angle we could to get east. When we got to Ship Island, we tacked back and headed to Pascagoula, Mississippi. The wind did clock around as predicted, but not far and fast enough for our plans. We ended up sailing about 45 miles to make 40 miles East of Gulfport. We ended up motoring the last 3 miles to make our anchorage at Petit Bois Island before the sun went down. It was a 10.5 hour sailing day, but it was sure fun sailing alongside our new friends.
The wind died down over night as predicted and we had a very nice sunset and calm night.

We awoke to a beautiful morning, but were sad to see Brain and Gill head out. We went on deck to waive goodbye, but that took longer than we both expected. The windlass was giving them trouble again and they ended up running aground. We dropped our dinghy and installed the outboard. I was able to push them into deeper water and they were on their way. Fair winds, Brian and Gill, we can't wait to see you again.
We then headed to shore to explore this uninhabited island. It is a beautiful sand spit with some fresh water lakes. It took us a while to find our way across to the gulf side, but when we did, we found a beautiful pristine beach that we had all to ourselves. It was one of our best experiences yet!


I shot more video than still images, which I plan to make into a vlog entry. We could sit on the beach and watch the surf roll in and then turn and see SHIFT at anchor on the protected side of the island. It was perfect.
We went back to the boat and had lunch. We then decided to head west 18 miles to Horn Island. We had light winds when we started, but then it dropped off to nothing and we had to motor about half the way to make it before it got dark. I wanted to try something that I have not done before. We left the dinghy in the water and used the bow line called a "painter" to tow it behind SHIFT. It worked very well and made it easy when we arrived at Horn to go ashore.

Right after we landed the dinghy we noticed some tracks that looked a bit strange. We later confirmed our suspicions that these were in fact Alligator tracks. The creatures leave the inland marshes and go hunting on the sound side. We never saw a live one, but we will think twice before swimming in these waters.

We took a few shots of SHIFT at anchor with the sun setting. 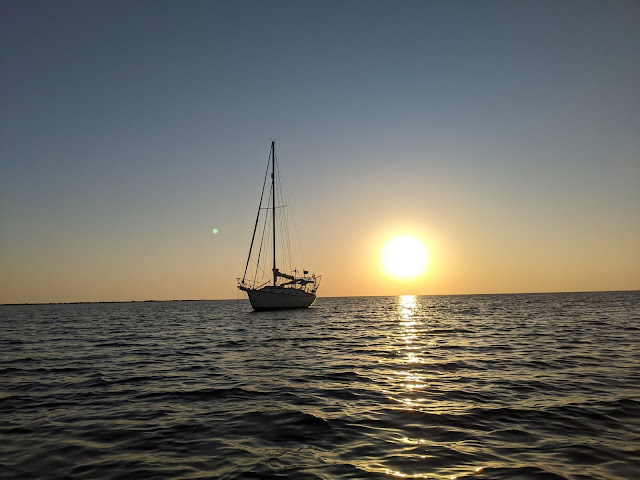 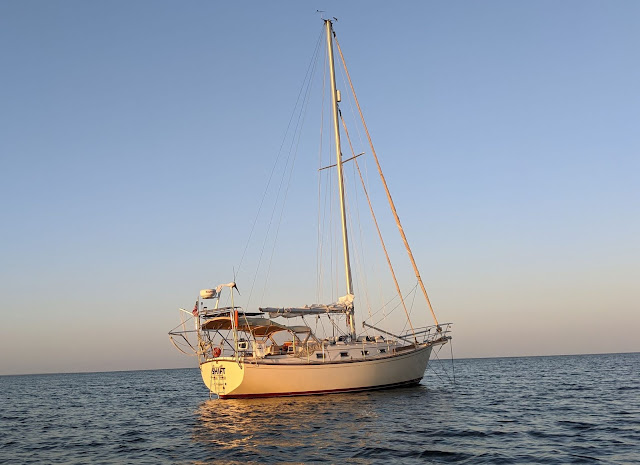 We had a weather forecast for increasing winds the next day out of the Southeast. We decided that we would raise the dinghy and head out early to do the downwind sail back to the marina in Gulfport.
We had good wind directly on our tail as predicted. We put the Genoa on the Starboard side and the main on the port and attached a line called a "preventer" to keep it from accidently gybing (or swinging across the boat).  We had an awesome 25 mile sail. As we neared the channel the seas were building in the 15 knot breeze. We dropped the sails and headed in. That is when I noticed something that has bothered me since. I powered up the engine a little more than I normally do, but still way below the recommended RPM to get into the inlet in the rough seas. The engine exhaust was putting out more white smoke than I have ever seen. We did not have time to get it checked out by a mechanic before we left, so that will have to wait until we head back to the coast next month.
That will be it for this entry, I have a few more things to write about, so there may be some more entries in the coming weeks. Thanks for reading.
Posted by ktmissouri at 1:11 PM 6 comments: