Living on a boat

The last 5 days that we were in Missouri went off like clockwork. We had a great plan and everything went better than we expected. We have been planning this move for quite a while and we thought of all of the contingencies.  I am a planner and Kim is an organizer, we really do make a great team. That team would be put to a test when we got on the boat.

With a few days to go, something kind of interesting happened. I had been mowing all day on the tractor. It was about 3 in the afternoon and I was tired and hot. I went in the trailer looking for a cool place to take a nap. I looked at my phone and there was a Facebook Marketplace add that looked interesting. It was some very nice snorkeling gear for a man and woman for $100. I went on line and priced the gear at over $500. We had discussed, this was one thing we knew we wanted to buy. After a flurry of texts, I was on my way to Springfield to make the purchase. The gear has been used twice in a pool. SCORE! So much for the nap. The gear is awesome and I can't wait to try it in the keys next winter right from our boat or dingy.

We were both waking up early each morning with thoughts running trough our heads of what we had forgotten. One early morning, it was as if the ranch was saying good bye, and don't forget how much you like it here. I was sitting in my chair drinking coffee and watching the sun rise when two deer walked over to the brush pile not far from the trailer. It was a nice doe and a young buck. They stuck around for about 15 minutes. This is a bad picture, but it is worth the memory. 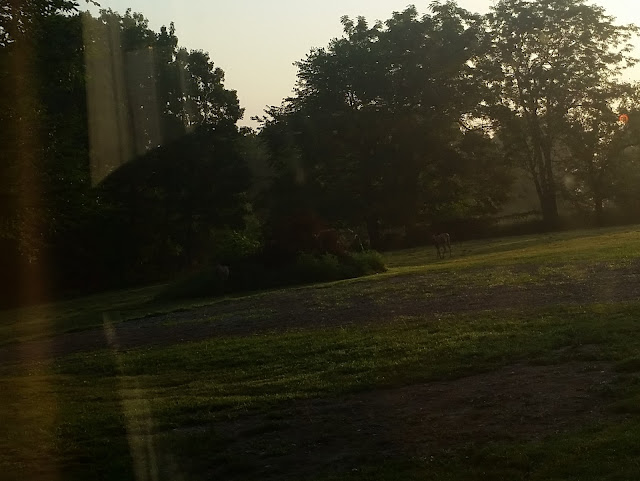 With two days to go, we made our last visit to Shannon's and the grandkids and then it was focused execution of the plan. We moved our trailer to a storage location on the ranch and then removed the hitch from the bed of the truck. We then moved the truck into position to be loaded with items that we had staged in our storage. These items were all that we might need on the boat. I say "might", because we were not sure what was there and what was not. We also were not sure what we would use and what would just be taking up valuable space. We were very concerned that there would not be as much storage on the boat as there is in the trailer.

We stayed in the lodge the last night and headed out early on the 9th of July. We had reservations just south of Atlanta. That is a 11 hour drive from Mansfield. We added an hour by stopping at Kentucky Lake to check out some marinas. We are really glad we did, we now know what to expect if we ever get up that far north.

We passed through Atlanta after rush hour and made it to the hotel at about 10 eastern. We then made a 6 hour drive the next day and by 3 PM, we were moving our overnight bags on to the boat. Here are a few shots of the boat: 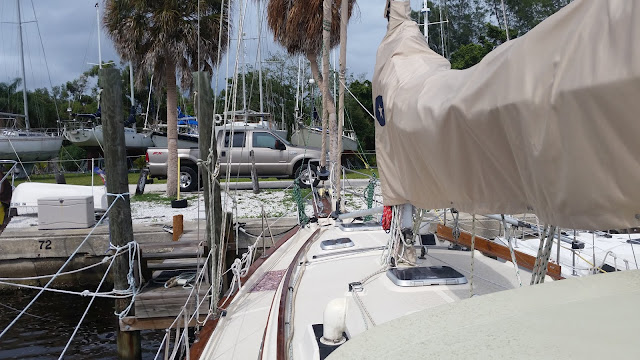 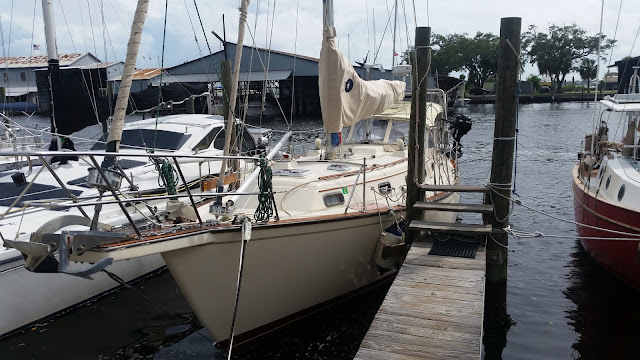 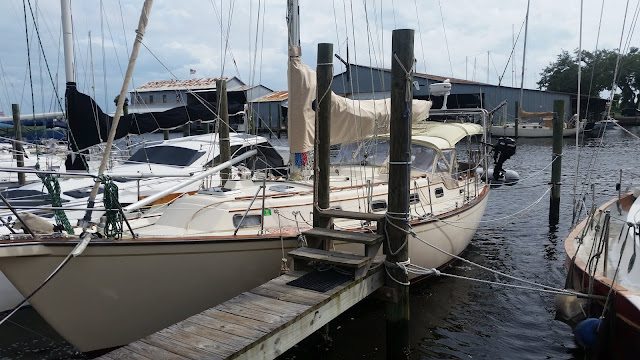 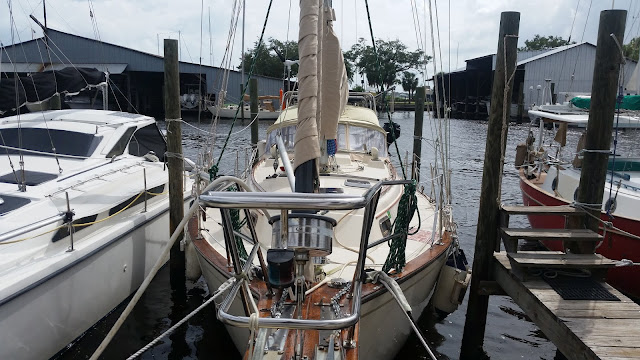 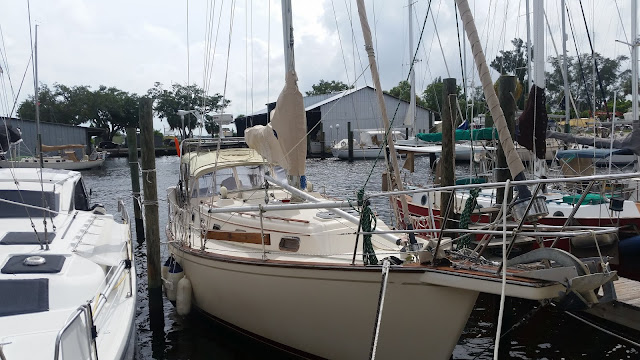 From that point on we have been working on something from the time we get up in the morning, until we go to bed at night. There are so many systems that we have to learn and understand. We will have to do most of the fixing and maintaining ourselves. We have always been very self sufficient in the trailer, but with a boat there is no one to call if you are at sea.

The one thing I will say is that living on a boat hurts! I can't tell you how many times I have hit my head or arm or back on something . I am slowly learning how to move on this boat, but learning is painful. You also have to be a contortionist to get into some of the tight spaces to work on something or organize a locker.

Kim has done an amazing job getting a place for everything. We are both amazed at how much storage this boat has and how much great stuff was left by the previous owners. I went to the grocery store to provision the boat and ended up buying $175 worth of food. We both said it would never fit, but it did, with space to spare. Here is our view in the evening at the marina.


The first 4 days we were in Palmetto, the weather was very rainy and windy. It was all part of Tropical storm Barry that hit Louisiana. We decided to stay at the dock and work on the boat. Then on Saturday, we decided it was time. We cast off the dock lines and backed the 18,000 lb and over 40 foot long vessel out of the slip and into the fairway of the marina. I was nervous as a cat, but all went smooth. We cleared the harbor and headed out into the Manatee river. There was lots of boat traffic on this summer weekend, but we were fine once we were in open water.

We just motored around for a while testing systems including the autopilot and other very cool electronics. We even went over to an anchorage and dropped the hook for a couple of hours.

Then we had to bring her back to the dock. That did not go as smoothly. We had an issue that luckily did not cause any damage to our boat or a neighbor, but I was worried. They say any landing you can walk away from is a good one. We will go with that for now.

That is enough for now. In my next entry, I will write about our first time actually putting the sails up. Come back to see how that turns out.