Gulfport to Carabelle, Florida, Hours of Boredom Followed by Minutes of Excitement

We came to Gulfport, Florida to catch up with some friends in the area. We were also watching the weather to find a good window to cross the Gulf of Mexico. We arrived in Gulfport on Tuesday, February 25. The wind was up, so we stayed on the boat until the next morning. We made plans to have lunch with our now good friend Mike, who was also our broker when we bought our boat. We got the dingy down and made it to the free dock at the Gulfport Casino. Mike has been having a health issue and we were very happy to find out that he was doing very well. He is a great resource for advice and information and we had lunch together and spent a couple of hours catching up.

Wednesday was another bad weather day, so we stayed on the boat. We made contact with Geoff and Marsha and Don and Kim and planned to get together on Thursday. Thursday was the most settled weather day of the week. We got the dingy down and had a blast hanging out with the other two couples. Gulfport is a cool little area just south of St. Petersburg. For some unknown reason, I failed to take one picture of our very enjoyable day.

I was watching the weather closely and decided that the crossing was possible for March 1 and 2. We would have to leave on Saturday, February 29 and motor 33 NM up the ICW to Tarpon Springs. We would have to motor because the wind was forecast to blow 15 to 25 out of the North, which was exactly the direction we needed to go.

We got the dingy on the back of the big boat and prepared for the next three days.

We left at just after sunrise and started motoring to the first bridge. We would open a total of 7 bridges on the day. The winds were as predicted and kind of cold at right at 50 degrees. I was glad we brought all of our bad weather gear.

We finally arrived at the anchorage at 4 pm. It was a long day that I was happy to have behind us. The anchorage was tight and had a bunch of unattended boats in it. We found a place and dropped the hook in 10 feet of water along the shore. It was very calm and that felt great after the wind from the day.


The forecast was for light winds in the morning and then almost no wind for a couple of hours and then south winds building to 10 knots into the next day. We were up early and left just after sunrise and headed out into the bay. We had almost no wind and motored for the first two hours. Then the wind came up enough to sail along for about 2 hours at 4 knots. Then the wind just died again.

The wind died off completely and we motored for almost 12 hours. It was nice to cruise along in calm seas as we got further and further from land, but the drone of the engine is not my favorite sound. We were both fishing, but only Byron had any luck. He caught a nice Amberjack and then grilled it for dinner while they were moving along. Kim and I both took naps and felt good throughout the trip. 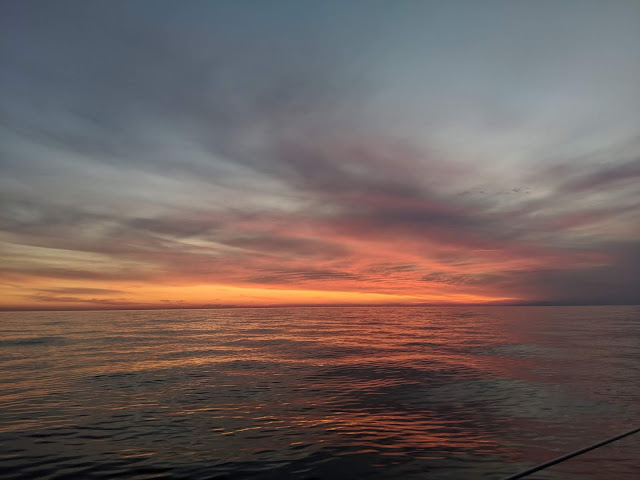 About 1:30 am, the wind started to build from the south. At first, it was a nice 5 to 8 knots. I put up our pole and we picked up speed and then turned off the motor. We had a great sail for the next 3 hours. By 4:30 the winds were up to close to 20 knots and the seas were building. What happened to the 10 to 15??? Our speed picked up and we were flying along at 7+ knots. Surfing down waves that had now built to close to 6 feet. It was an exciting ride in the dark. By daylight at 7 am the seas were getting more confused as we got closer to land. The northern Florida coast is known for big seas that stack up on shore when the wind is out of the south. We got hit on the side with a large swell and the boat slammed down hard as a gust turned the boat. It was then that Kim yelled, " look at the pole!" It had snapped in two pieces and was dangling in the water. I attached a tether to my life vest and went to the foredeck in the pitching seas. I was able to get the pole detached and handed it to Kim to stow below. I organized the lines so that we could sail on just the mainsail and made it back to the cockpit without issue.

We were still moving along at over 5 knots, but I needed more drive from the front of the boat, so I put out a heavily reefed Genoa. All was good from there and at about 11 am we made the inlet at Carrabelle. We dropped the mainsail in the lee of Dog Island and motored to the mouth of the river. It was like another world, we could still feel the wind, but the water was flat. We moved on in to the Moorings Marina and took on fuel. We have burned a total of 20 gallons from Punta Gorda to Carrabelle. We still had 38 gallons on board.

We covered a total of 149.9 nm, which is 172 miles in about 29.5 hours. We all felt like it was a significant accomplishment and were happy to have it behind us.

We are now tucked into slip 83 and will probably stay here for a week to wait for the right weather to move further west. Byron and Mary had a bit rougher passage than we did. Their 31 foot boat is much lighter than SHIFT and was thrown about in the rough seas. They also had a mainsail issue and it was out of action for most of the night. They made it safely and are right next to us in the marina.

Carrabelle, Florida is a cool little town. I will introduce you to this quiet fishing village in my next entry.
Posted by ktmissouri at 8:53 AM